From unloved to much loved: Commodities regain their place in the sun 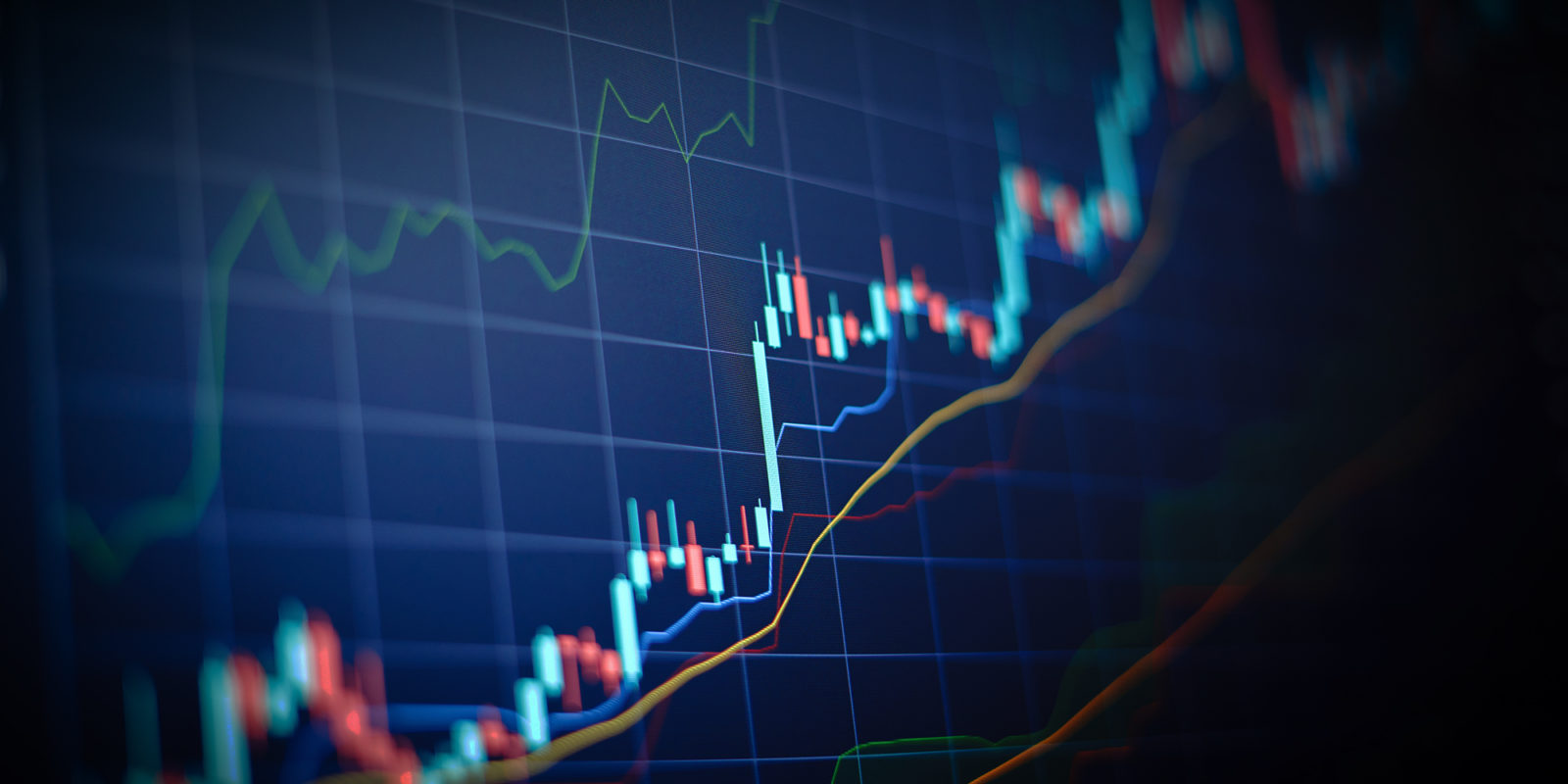 Commodities are notorious for their ability to do a complete about-turn and make fortunes for investors that didn’t give up on the sector. After almost a decade of being out of favour, a broad rally in the sector last year has prompted predictions of another supercycle akin to the almost decade-long rally in the 2000s.

A buoyant start to the new year after a bumper 2020 for all but energy commodities has, some say, laid the ground for a commodity supercycle after almost a decade during which the sector has been unloved and left out in the cold.

The steep rise in everything from base metal through to soft commodity prices can largely be attributed to the Chinese growth story and supply constraints. Looking forward, these factors are likely to continue underpinning commodity prices, albeit at a potentially slower pace, while vaccine optimism in the West and the anticipated broader global economic rebound could further fuel their upward trajectory.

Precious metals had a particularly strong 2020, with silver leading the commodity sector and precious metal stable, gaining close to 50% for the year as a whole. Expectations are that the dual safe-haven and industrial characteristics of the metal could see it continue to outperform its counterpart, gold, during the year ahead.

Palladium (up 26% and the second-best performing commodity) pipped gold (up 25%) to the post during a year when you would have assumed the unparalleled volatility and uncertainty would have seen the world’s traditional safe-haven asset take pride of place. The gold price did, however, break through the $2,000 per ounce level in August and it managed to put in its best annual gain in a decade. 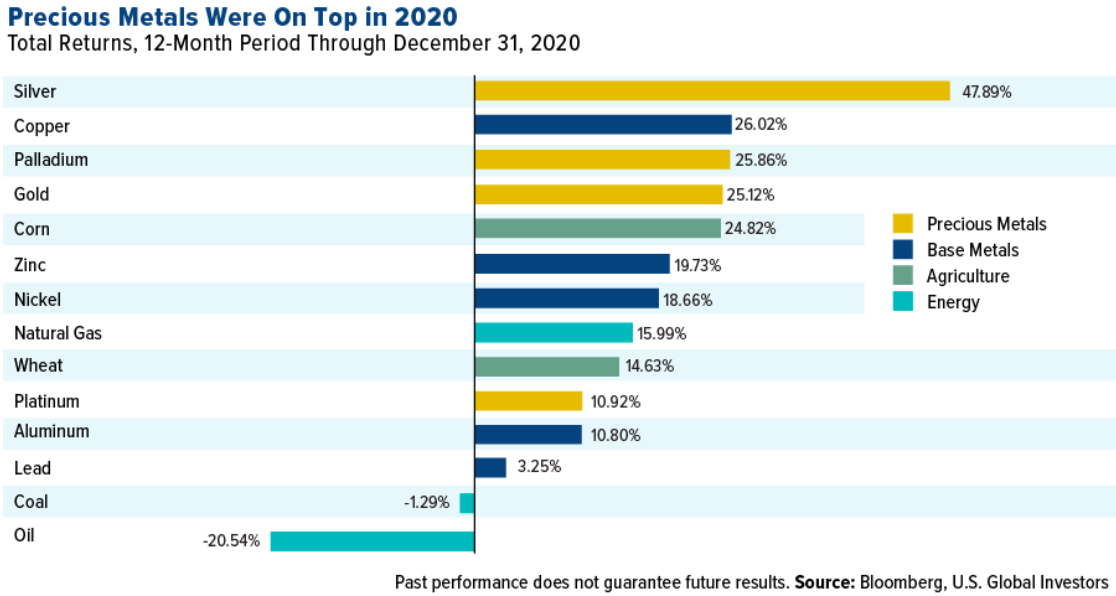 At the other end of the spectrum, oil prices (down 20.5% for the year) and coal (easing 1.3%) felt the acutest impact of the sudden stop in economies as the pandemic hit countries around the world. While the short-term picture for oil may look more promising for these commodities in 2021 if demand picks up in response to rising mobility trends and international travel, the ongoing shift to renewable energy alternatives, particularly with a Biden administration likely to renew support in this respect after the presidential inauguration, is likely to dampen longer-term demand for oil and coal.

Meanwhile, the commodities that rode high on the tailwinds of a Chinese economic recovery that began in the second quarter of last year were copper (up 26% last year and the second-best performing commodity), zinc (up 20%) and nickel (up 19%). The government’s fiscal stimulus was largely invested in infrastructure investment programmes, which resulted in strong demand for base metals and saw copper rally a phenomenal 67% from its lowest point in March last year when lockdowns began and markets sold off to a six-year high by the end of the 2021.

Saxon Bank says copper’s rally on the first day of trading was supported by a weaker dollar, “not least against the Chinese yuan which surprisingly was allowed by the PBoC [People’s Bank of China] to strengthen by more than 1% overnight.” With the Chinese manufacturing Purchasing Managers’ Index (PMI) expanding for the eight consecutive month, Saxon Bank’s head of commodity strategy, Ole Hansen, says this suggests that there will be continued strong demand for metals from the world’s largest consumer by far.

On mounting speculation that the world is at the beginning of a new supercycle in commodities, Goldman Sachs is confident that there will be a new commodity bull market that rivals the boom in the 2000s, driven by massive Chinese infrastructure investment, as well as the oil price spikes in the 1970s.

Saxon Bank is also bullish on commodities in 2021, but Hansen says the market may need a period of short-term consolidation after its rapid buildup.

During the first week of 2021, the Bloomberg Commodity Index gained 4.2% after increasing 10% during the last quarter. Hansen points out that the broad increases disguised a slump in the gold and silver prices in the face of rising bond yields and a stronger dollar, which are a potential warning sign that the “everything rally” in commodities and stocks may run into short-term challenges.

“With this in mind, stay focused on the dollar and yields and the risk of further increases temporarily impacting the bullish technical outlook,” he advises. 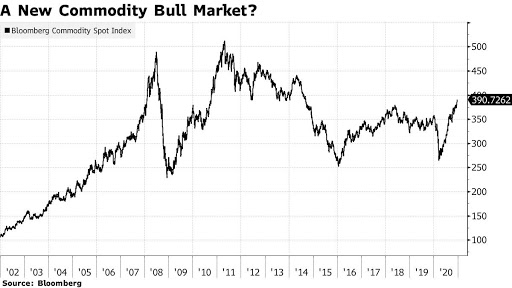 For the year as a whole, Hansen identifies the key drivers that are likely to continue to support the sector. These are:

Another would be the prospect of bigger US fiscal stimulus payouts after the transition to the Biden administration, with the Democrats likely to push for individual payouts amounting to $2,000 and expected to engage in other spending programmes, a stance that is already stimulating demand for assets that benefit from reflationary conditions.

As the top export destination for South Africa’s exports, China’s ongoing appetite for raw materials would be most welcome. In the base metals cluster, South Africa is the third-largest exporter of iron ore, with a 5% share of the global export market, and thus is well placed to meet demand for iron ore from China and the rest of the world as economies regain momentum. Last year iron ore prices increased by a staggering 90% from the March lows on the back of Brazilian supply issues and Chinese demand.

Although a 35% increase in the Bloomberg Commodity Index from its nadir in March last year is certainly promising after languishing for nine years, the prospect of a supercycle in commodities will inevitably be tied to the fortunes of the global economy and the sustainability of any rebound that does take hold this year. Thus, it may be too early to bank on another wonder year for the commodity sector as a whole. BM/DM