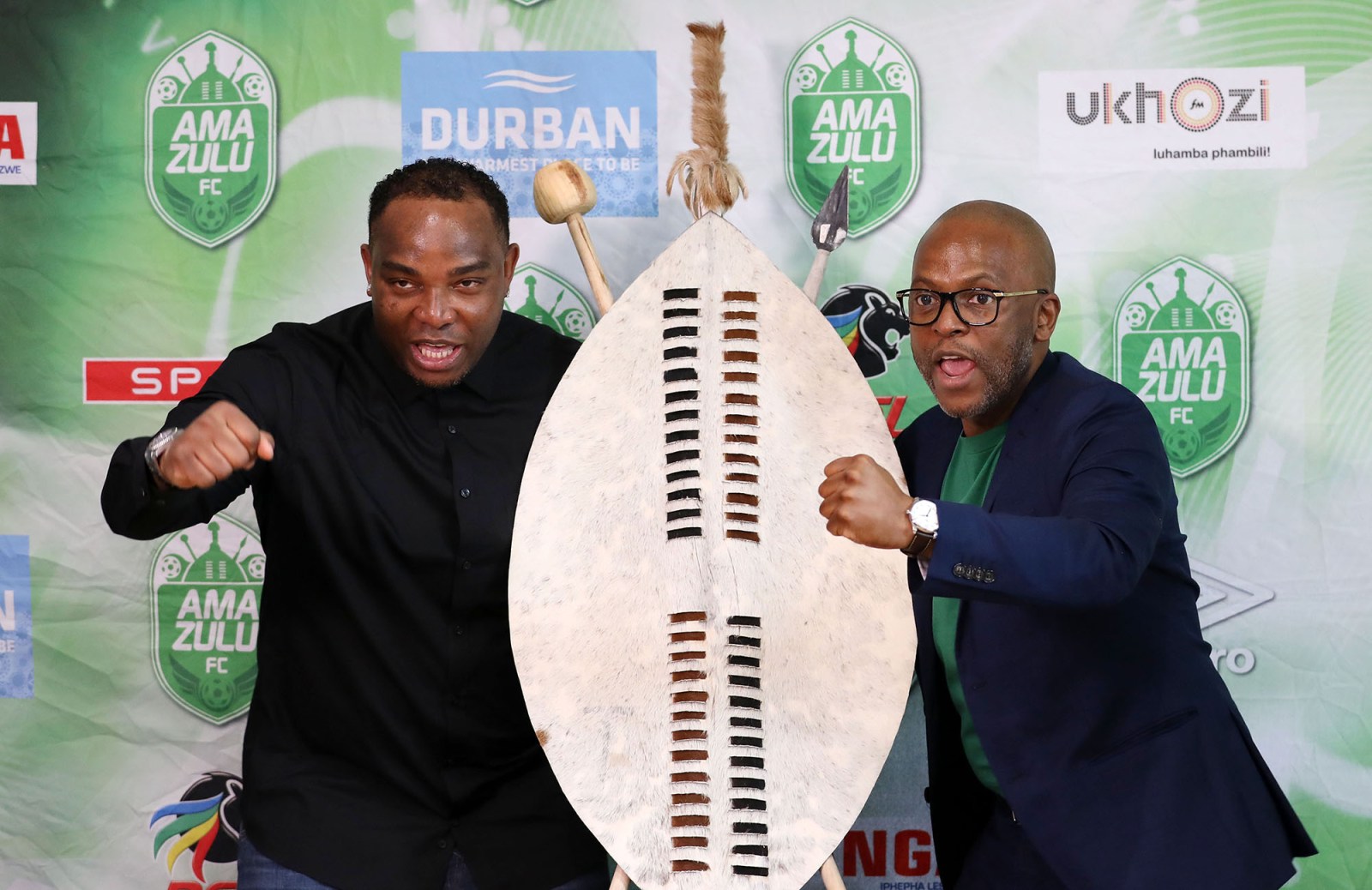 Sandile Zungu, chairman of AmaZulu, with Benni McCarthy, coach of AmaZulu during the DStv Premiership 2020/21 AmaZulu Coach Announcement at the Zungu on Main, Johannesburg on the 13 December 2020 ©Muzi Ntombela/BackpagePix

Usuthu’s new owner has big dreams for the club and has set to work recruiting top players as well as Benni McCarthy as head coach. But only results will determine if they are on the right track

The puzzle pieces for AmaZulu rising to the upper echelons of South African football are steadily coming together. In the end though, it’s results that will determine the team’s destiny.

AmaZulu, one of the country’s oldest clubs, have never really stamped their authority on South African football – even less so in the Premier Soccer League (PSL) era.

But Sandile Zungu, their new owner who took over from the Sokhela family in October last year, wants to change this.

The Umlazi-born businessman pointed out that he would love to see Usuthu rise to new heights in the next 12 years to become one of the most formidable forces in South African football by 2032, when they will mark their 100th anniversary.

“I want a winning team. We must not score and concede sloppy goals. A young girl in Lamontville must want to go to the game when AmaZulu are playing because of the entertainment,” said Zungu at the official announcement of the takeover.

Patrick Sokhela, the man who held the reins at the KwaZulu-Natal-based club until Zungu’s takeover, believes in the businessman’s ability to transform the club over the next decade.

“I have been the owner and chairman of AmaZulu for the past 16 years‚ and the time has come for me to pass the banner to a new owner. I believe the new owner will continue to grow the club in both status and stature as I have endeavoured to do‚” Sokhela said.

Just a few months into the Zungu epoch, the transformation is already in full swing.

Before the season began, Usuthu went on a recruitment drive. In the process they managed to secure some big-name signings. These include Siphiwe Tshbalala, Luvuyo Memela, Xola Mlambo and Augustine Mulenga.

Considering all the fanfare around them, the team has started off the season in a less than ideal manner. In their eight games before the festive break, they lost three, drew three and won just two.

Those disappointing displays, despite all the investment made by the team in the transfer market, led to the resignation of the coach, Ayanda Dlamini. The club announced that he would be redeployed to coaching the youth ranks.

Zungu then moved swiftly to rope in Bafana Bafana’s all-time leading goal scorer, Benni McCarthy. The former Cape Town City coach was officially announced as Usuthu’s new trainer in December, and he waxed lyrical about the ambitions of the club.

“When I first communicated with the chairman, he explained [his vision] to me and it didn’t have to take a lot to get involved in the project because when someone speaks to you about change, not only [about] footballers currently playing in the team but the future of millions of young players that this country has,” said McCarthy at the time. “How can I not want to be part of a club that has an aspiration? Because I was once a young boy too, and I was fortunate enough to be given an opportunity to become someone.”

The former Porto striker brings with him a winning mentality that has served him well throughout his career, both as a player and coach. He will be looking to instil this into his players as they mount a charge for the top four, as was the mandate laid down by Zungu before the season began.

McCarthy started off his tenure in style as they brushed aside Chippa United 3-1 before the Christmas break.

Having had just over a week to work with his players before their first game in the new year, the 43-year-old will be hopeful that they can carry that momentum forward and begin to gradually climb up the table.

They currently occupy ninth spot, six points off fourth-placed City. Their next game is against Bloemfontein Celtic, a tricky customer.

AmaZulu’s next two games after that will be against the inconsistent Kaizer Chiefs and relegation candidates Maritzburg United.

There, McCarthy and his men will be eyeing the maximum six points to really kick on, but, again, they will not have it all their way in those fixtures – in spite of the duo’s questionable form in the league.

The good news for Usuthu is that all the investment into the fire power is paying off – in attack at least. Having only scored 20 goals in the whole of last season’s league campaign, they have already scored 11 this season.

More impressively, they have done this without Bongi Ntuli, whom they depended on heavily for goals last season.

Ntuli scored 13 of their total of 20 goals in the previous campaign, but has been missing in action with injury since the new season started. He is now back in training, and his return to action is imminent.

“Ntuli you can still see he has got to fight to get his fitness back. I think just being part and parcel of the team and what we have been doing, he is enjoying it,” McCarthy said recently.

Linked with a move away from the club at the end of last year due to his keen eye for goal, he will undoubtedly be salivating at the prospect of working with not only McCarthy but Siyabonga Nomvethe as well.

McCarthy roped in the Premiership’s all-time leading goal scorer to be his assistant, alongside Vasili Manousakis, his former assistant when he was coaching in Cape Town.

For Ntuli, the excitement of working with two of the best strikers the country has produced should put an end to any ideas of a departure. Especially when he now also has quality players surrounding him and he won’t have to shoulder the responsibility of scoring alone.

Now it remains to be seen whether all these aspirations AmaZulu have can be realised. Those involved can talk a great deal about what they wish for the club, but only results will determine whether they are on the right track for vision 2032. DM168