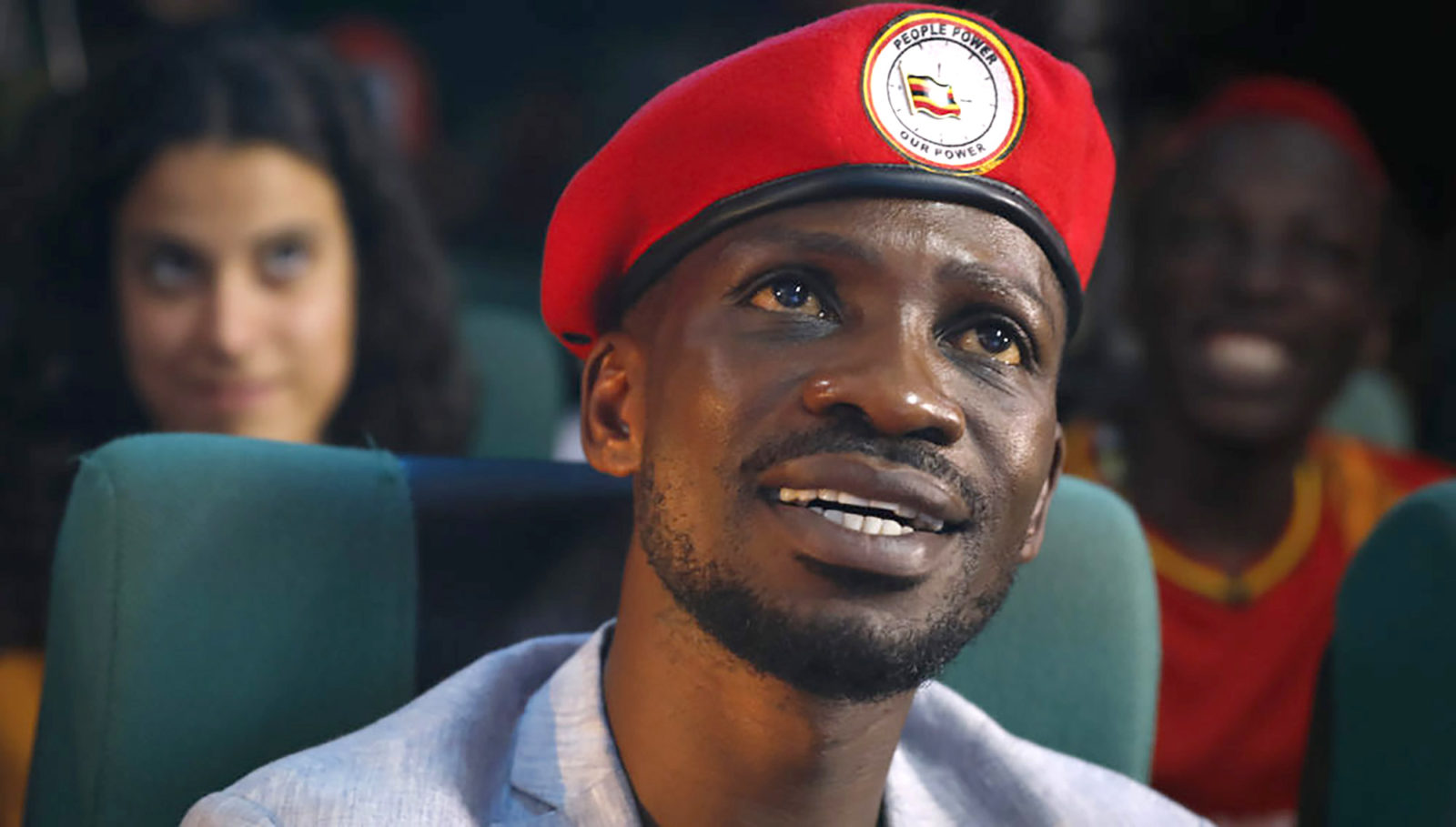 Ugandan musician-turned-MP Bobi Wine a discussion with prominent Kenayn political activist Boniface Mwangi in Nairobi, Kenya, 12 October 2018. A vocal Ugandan Member of Parliament Bobi Wine, whose real name is Robert Kyagulanyi, was charged with treason for allegedly stoning President Yoweri Museveni's convoy during a by-election in August 2018. Upon returning from US where he received treatment injuries he sustained during detention, he was re-arrested at the airport. EPA-EFE/DAI KUROKAWA

Bobi Wine, the Ugandan reggae singer turned presidential candidate, has urged Pretoria and others to speak out about Yoweri Museveni’s electoral violence, and has pinned some hopes on a US resolution.

Bobi Wine, the embattled reggae singer who is presenting the greatest challenge so far to Ugandan President Yoweri Museveni’s 35-year stranglehold on power, has urged South Africa and others to speak out about the violent persecution he is suffering during his campaign for the 14 January presidential elections.

Last week one of his security team was run over – deliberately he says – and killed by a military police truck. Others in his entourage have been shot or assaulted. He himself has often been arrested, the last time being on 30 December along with 126 members of his team while campaigning.

Wine was later released. But he told Daily Maverick in a phone interview on Tuesday this week that most members of his team remained in “illegal detention” in various places, including in military barracks.

“We continue to fear for our lives. Every day,” said Wine, who now wears a bulletproof vest and a helmet while campaigning.

Security forces have been using rubber bullets, teargas and sometimes even live ammunition against Wine’s supporters and about 50 people were reportedly shot dead in protests after he was arrested in November.

“I want to request and encourage the international community to kindly keep their eyes on Uganda because we are part of the global family and we wouldn’t want to be slaughtered in the dark,” Wine said.

“Because Museveni is out to unleash extreme levels of violence but if he is constantly reminded that the world is watching, then he might be able to restrain himself.”

Wine said he and his party were looking for support, especially from the people of Africa, “this great continent, they are supposed to be in solidarity with their fellow Africans”.

And to South Africa, in particular.

Wine said neither South Africa, the African Union, nor any of the regional organisations which Uganda belongs to, such as the East African Community or the Intergovernmental Authority on Development, had publicly criticised the Museveni government.

Museveni, 76, led military revolutions against the oppressive Amin and Obote regimes from 1979 and seized power in 1986. He then argued with his National Resistance Army (NRA) colleagues that its political arm, the National Resistance Movement (NRM), should only remain in power for two years. They persuaded him that it would need four years to effect real change before quitting office. But power clearly went to his head. He has twice altered Uganda’s constitution to stay in power – in 2005 to remove the two-term limit and again in 2018 to remove the 75-year-old age limit on presidents.

Wine, whose real name is Robert Kyagulanyi Ssentamu, switched from singing protest reggae to formal politics in 2017 when he won a seat in the national assembly.

He is 38, exactly half Museveni’s age, and has focused his campaign on tapping the discontent of a younger generation of Ugandans who are too young to feel much gratitude to Museveni and his ruling NRM for liberating the country from Amin and Obote.

Stratfor, the US security think tank, believes Wine “represents the most significant challenge to the country’s longtime president, Yoweri Museveni, whose failure to address growing youth unemployment and disillusionment with the current ruling elite is placing the country on a long-term trajectory of political unrest”.

“Also our people are miseducated. The education they get does not prepare them for the 21st century. Museveni has destroyed healthcare, he has destroyed the economy completely, destroyed the agricultural sector, insert comma which used to employ the biggest part of the population.

“So now the majority of our young people are unemployed because of Museveni’s system,” he said.

His remedies would be founded on good governance, including re-empowering institutions which had had their powers usurped by Museveni.

And, Wine said, if elected, he would pour substantial state resources into education and health, and would also focus on recovering state assets lost to corruption, “the cancer that has eaten the fabric of our society”.

Wine insisted that he and his National Unity Platform party would oust Museveni and the NRM with 80% of the vote – if the elections were free and fair – because some 85% of Ugandans were of his generation and disillusioned with the 35-year-old incumbent regime.

But “it’s very, very unlikely to be free and fair. The election is already being rigged… We are not allowed to campaign, we are not even allowed to drive on the main roads. Because the regime in Uganda is under extreme, extreme panic.”

He said it was hypocritical of the government to say security forces were cracking down on his campaign only because it was defying Covid-19 physical distancing rules. He had also been prevented from campaigning on national radio and TV, he said, and that Museveni himself was campaigning in areas, such as Entebbe town, that the electoral commission had placed out of bounds because of Covid-19.

If it’s being rigged anyway, isn’t the election a futile exercise?

“It’s not,” he insisted and suggested that was largely because his strategy was to expose the rigging to the world.

“We have called upon people to be the polling agents, to be the election agents in every corner of the country at every polling station. We have also built an application that will help us to tally our votes to see the result in real time.”

And his party will extensively deploy the camera, “the weapon of exposure.”

“General Museveni has always been hoodwinking especially the

development partners, especially the West, by posing as a democrat, but operating as a brutal dictator who has murdered and maimed and tortured people.

“Now this is our opportunity to expose him. I’ve always been calling on the international community to make the observation of the rule of law, respect for human rights and the principles of democracy, to make them pre-conditions of co-operation with Uganda and with Museveni in particular.” But is the world listening?

Wine is disappointed by the lack of a substantial response so far, though he is pinning some hope on a resolution which US Democratic Party Senator Bob Menendez has just tabled. It calls on the Senate to condemn Museveni’s “campaign of political repression”.

The resolution calls on the US government to consider imposing targeted sanctions and visa restrictions on Ugandans undermining credible, transparent elections or perpetrating or abetting human rights abuses.

And it demands that the government cut back US development assistance and co-operation to Uganda if “neutral observers determine that the January 2021 polls do not meet internationally accepted standards for credible elections”.

Wine said that: “The military that Museveni is using to crack down on the people [of] Uganda and abuse their rights is largely sponsored by the US”. So he believes Menendez’s resolution could and should make a big difference.

The trouble with Menendez’s resolution that the US should cut back on aid if “neutral observers” decide the 14 January election is not credible is that it seems unlikely that there will be any neutral observation. The European Union decided not to send observers because it said its recommendations after the 2016 elections were ignored.

South Africa’s respected Electoral Institute for Sustainable Democracy in Africa (EISA) which observed the 2016 elections, is still struggling to get accreditation for next week’s poll.

And Wine said he was not aware that any other African organisations would be observing the elections either.

He regrets that he and veteran opposition leader Kizza Besigye were unable to forge an election coalition (largely, it seems, because both leaders wanted to be the presidential candidate).

“We really wanted to unite, but this will not stop the people of Uganda from uniting,” he insisted. DM168