The Horror! The Horror! Inside South Africa’s battle against Covid-19 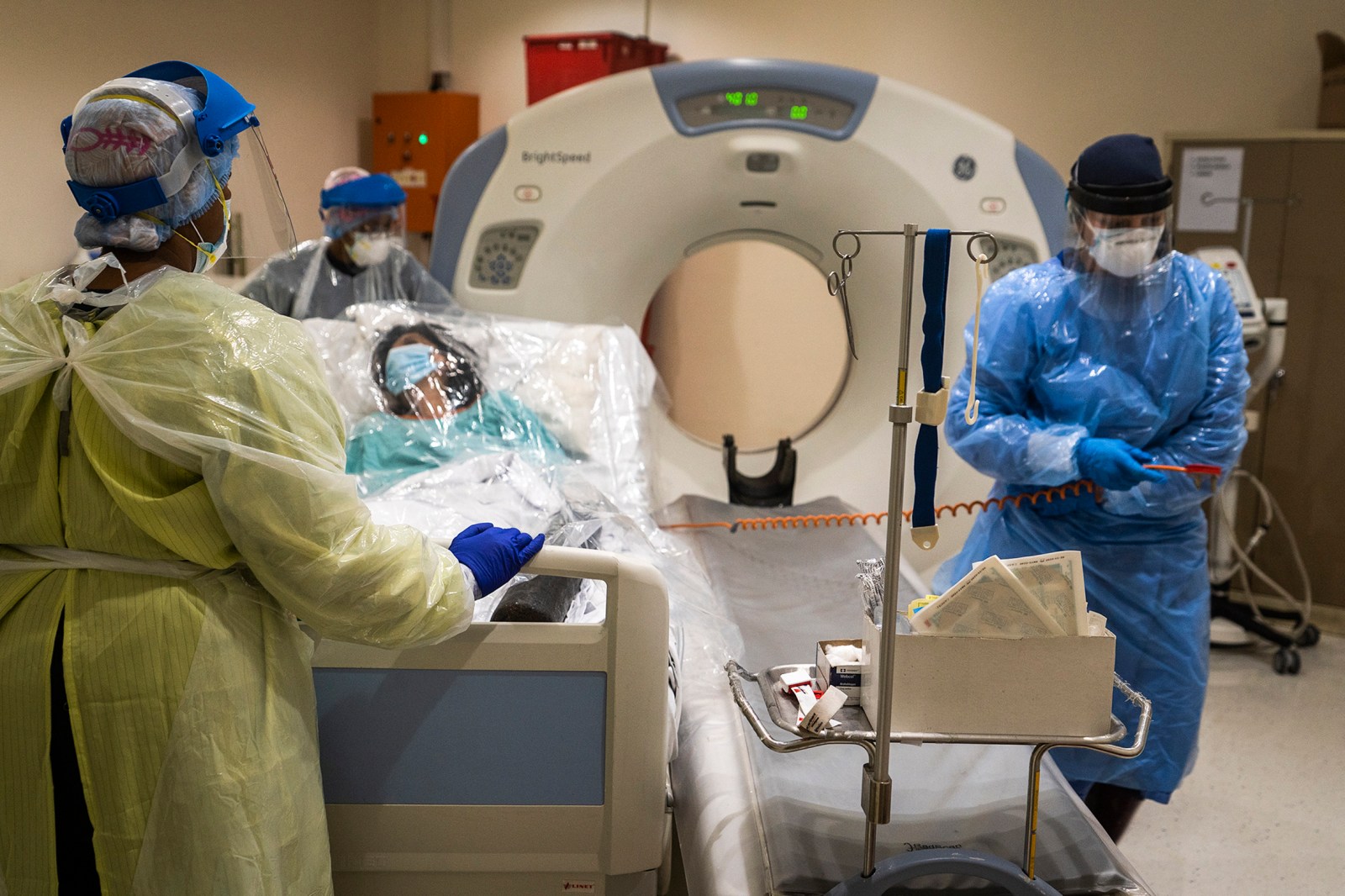 A medical team about to conduct a CT scan on a Covid patient at a Johannesburg hospital. Radiographers have reported that conducting scans on Covid patients is more time consuming as the process includes the donning and doffing of PPE and also disinfecting the department to make it safe for both staff and patients. Photo: Shiraaz Mohamed

After weeks of mudslinging, the Department of Health announced this week that it was expecting its first million Covid-19 vaccines to be delivered in January. But questions remain.

How do you persuade 67% of SA to receive two doses of a non-compulsory Covid-19 vaccine – when almost half the country, according to a recent poll, says they won’t take it?

Vaccine scepticism is just one of the problems facing the Department of Health as it prepares for the most ambitious immunisation programme in almost a century. Health Minister Zweli Mkhize told Parliament this week that for the cycle of Covid-19 transmission to be broken in South Africa, scientists estimate that a minimum of 40 million people need to receive a jab.

Yet even among the political elite, it is already clear that there are high levels of anti-vaxxing sentiment. It’s not just Chief Justice Mogoeng Mogoeng, who last year voiced his concern that a Covid-19 vaccine might demonically scramble DNA. This week, Cosatu president Zingiswa Losi said while chairing an event that South Africans didn’t want “non-organic” vaccines. And former ANC MP Tony Yengeni posted on Twitter that he would never accept the “stupid vaccine” for his family.

This was all predicted by one of the only documents stemming from the Ministerial Advisory Committee (MAC) on vaccines, dated 15 December 2020.

“The issues around science denialism, anti-vax sentiments and vaccine hesitancy in South Africa should be addressed through an understanding of the main drivers of the hesitancy and the development of effective local responses,” the committee wrote.

But for weeks, vaccine scepticism seemed the least of South Africa’s problems – as a concrete deal to supply the country with the necessary vaccine doses simply failed to materialise.

From DM168 interviews with multiple health sources, most of whom wished to remain anonymous, a picture began to emerge of a health department procurement team characterised by “incompetence and over-confidence”. The Department of Health had not responded to questions by deadline.

Fingers were repeatedly pointed at the deputy director-general, Anban Pillay, who is described as having a history of botching procurement deals.

Sources suggested that it was Mkhize and President Cyril Ramaphosa who were left scrambling to negotiate with pharmaceutical companies after it became clear that South Africa would not otherwise receive vaccines any time soon.

“The matter is being handled. There will be vaccines,” Mkhize said – just a few hours before his department was able to announce that a deal was being inked with India’s Serum Institute for 1.5 million doses of the AstraZeneca vaccine sent to South Africa over January and February.

Now, word is that South Africa will receive the bulk of the doses from AstraZeneca, with the remainder made up of the Johnson & Johnson vaccine and the allocation SA is due to receive from the developing world Covax facility in April.

What is now required is the planning for a vaccination programme unprecedented in modern times.

Nel said that when considering the “huge” number of doses to be administered, the pace at which this had to happen, and the accompanying training and procurement necessary, what was needed was a “very clear plan”.

Mkhize began sketching the outlines of that plan to Parliament on Thursday – and the scale of the operation is already daunting. Because it is likely that two doses of vaccine will be needed per person, authorities are working on the assumption that 80 million doses will need to be administered.

For this to happen over a 12-month period, it will require about 6,300 full-time vaccinators injecting 50 people a day. Medical and nursing students and “other cadres” may be drafted in to give jabs. At present, the plan lacks timeframes and other concrete details. What gives some health experts encouragement, however, is the mooted involvement of private medical schemes.

“The scale is large, but where there’s a will there’s a way,” Gray said, telling DM168 that she expected public-private partnerships to be important. Big companies with a national footprint such as Pick n Pay and SAB, which have “an infrastructure we can leverage and exploit”, might be key.

Where will the money come from?

Mkhize again attempted to soothe concerns on this front when appearing before Parliament this week. The reason the Solidarity Fund paid the Covax deposit, he said, was at the request of Treasury so that there was “no need to immediately tamper with the Budget”.

The Health Minister reported that vaccinations for 67% of the South African public were being costed at R20.6-billion in total – of which Treasury will be carrying the “major burden”.

But Mkhize added that private medical schemes would be asked to “cross-subsidise” vaccinations, and donors and business would be solicited for contributions. DM168

Who will be vaccinated first?