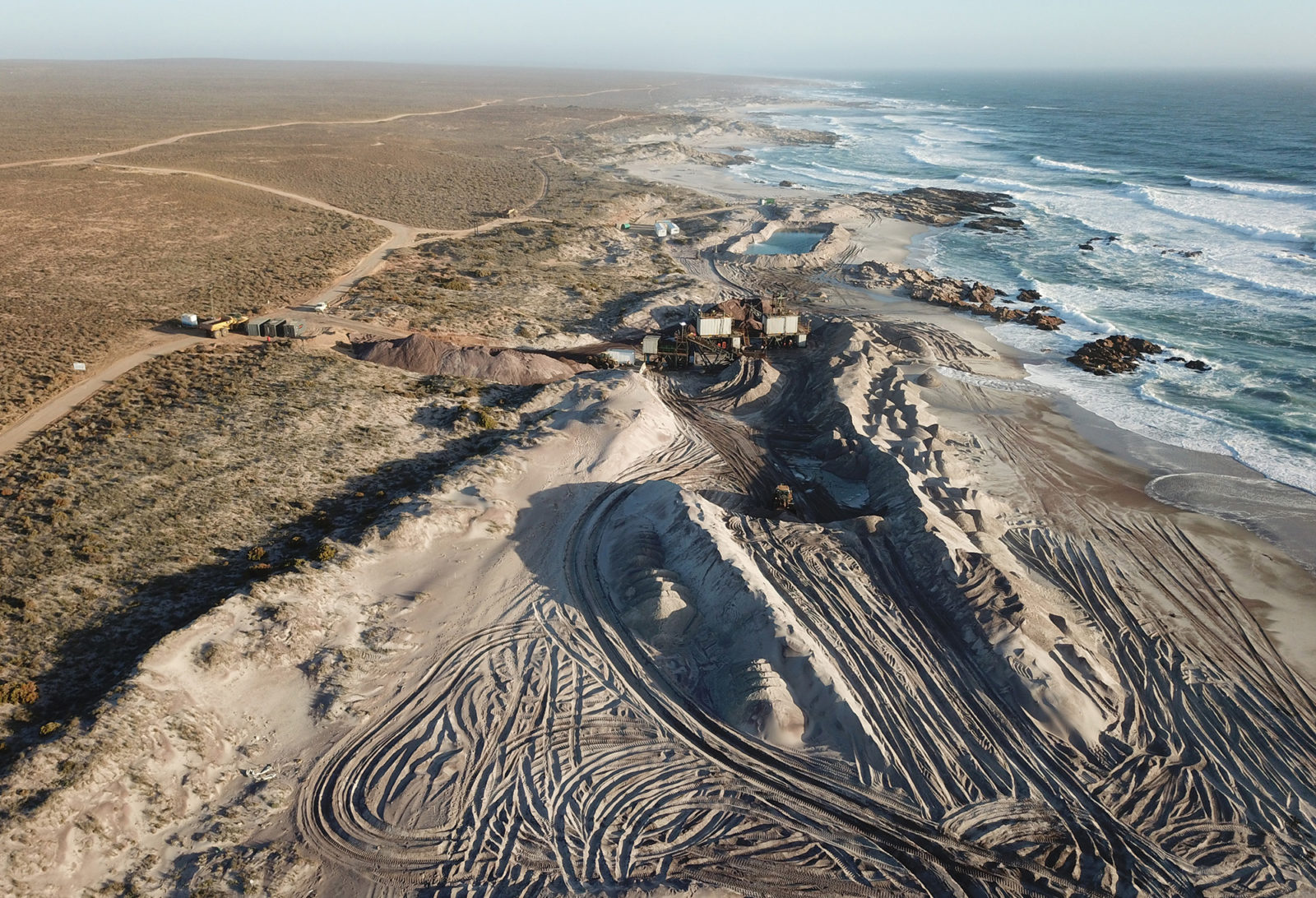 Overview of activities on Beach 10 of the Tormin mine extension run by Mineral Sands Resources ( MSR). (Photo: Supplied)

Long stretches of pristine coastline are being affected by mining enterprises. So surfer Mike Schlebach and others have formed an organisation to protect the area’s beaches, dunes and biodiversity.

South African big-wave surfer Mike Schlebach recently formed a non-profit company to challenge the increasing number of prospecting and mining activities on the Cape West Coast, which has led to ecological degradation and restrictions to coastal access. These mining companies seem to be operating with little regard for fragile coastal ecosystems and the concerns of local and recreational users.

This has been playing out on South Africa’s West Coast – the arid, hauntingly beautiful stretch of otherwise largely untouched public and private farmland abutting the sparkling Atlantic Ocean stretching up to the Orange River – for decades. These mines litter large stretches of the coast, from north of the Olifants River to Alexander Bay on the Namibian border.

In several instances, existing sites have not been rehabilitated as required by South Africa’s Environmental Impact Assessment procedures. Several new prospecting and mining applications have also been submitted for the coastal and offshore area between Elands Bay and the Olifants estuary. Incredibly fragile ecosystems are being carved up for diamond mining, oil and gas exploration and valuable heavy mineral deposits, often with damaging results.

Thanks to the sheer remoteness of this sparsely populated region, the activities of these mining companies have largely escaped public scrutiny. The situation has become so concerning it prompted Schlebach and several other surfers and eco-activists to found a non-profit company, Protect The West Coast (PTWC), in November 2020. Schlebach, a highly respected big wave surfer and regular visitor to the region to surf remote big wave spots, was prevented from accessing what he knew to be an open beach by private security contractors at the De Punt mine, near the Olifants River mouth.

“I was told I needed a permit but pushed back and got ‘permission’ to camp overnight on public land,” explained Schlebach. “The next day, I took a drive north to find the Tormin mine and saw new roads, trucks and excavators, all hard at work digging up this pristine piece of coastline.

“They have been given permission to mine for heavy minerals on 10 beaches north of the existing Tormin mine. Beach mining is allowed between the low-water mark and the dunes although a 10m buffer area from the toe of the dune to the start of mining is required. This means the beaches and any marine life that lives in or on them will likely be destroyed. Any recreational access is now also in jeopardy of being highly restricted.”

The impact of mining on these fragile ecosystems is concerning.

“What we are witnessing on the ground is the degradation of coastal and marine ecosystems without proper regard for vulnerable dune systems, critical biodiversity areas and government’s objective of enhancing access to the coast,” said Merle Sowman, associate professor and head of the department of environmental and geographical sciences at the University of Cape Town and a PTWC advisory board member.

“There have been several objections and appeals against the increase in prospecting and mining applications along the West and Northern Cape coasts, but these have been mostly ignored by the minister of environmental affairs, Barbara Creecy,” Sowman added.

“The South African government is greenlighting companies to mine on vast areas along the West Coast with very little pushback and consideration for anything other than some short-term jobs and some cash in the bank,” said Schlebach. “What is alarming is that the environment minister is supporting these mining activities and did not stand up and protect our coast as required of the minister charged with protecting our coastal resources and heritage.”

Environmental effects of mining in this environmentally fragile region include the damage or destruction of coastal dune systems and sea cliffs and impacts on biodiversity. Mining on beaches and in the nearshore zone can result in imbalances in sediments, cliff collapses and the deposition of terrestrial material into the water column, which can affect filter feeders and other pelagic species, undermining the fishing industry. Large numbers of trucks on gravel roads generate air pollution. The impact on groundwater resources affects local farmers.

As Schlebach discovered, the potential curbing of the right of access to these areas inhibits recreational and tourism-related activities, such as surfing, hiking, trail running, mountain biking, rock angling and diving. The loss of archaeological and cultural sites and fossils was even more important, added Schlebach.

“The Khoisan have been roaming the coast for centuries,” he said. “These mines destroy middens and other areas of significance that desperately need to be protected.”

Though all the mining activities along the West Coast concern PTWC, it is focusing on four current or proposed mining operations in the area, as well as the building of a R40-billion port by the government for mining exports at Boegoe Bay in Port Nolloth. The organisation’s initial main focus is on Australian-owned Mineral Sands Resources (MSR), which currently holds rights to mine valuable heavy minerals on the coast near the town of Lutzville.

MSR was also recently granted permission to extend its existing mining activities along an additional 10 beaches north of the existing Tormin mine, as well as an inland strandline mining area on the farm Geelwal Karoo 262. “The Tormin Mine extension should never have been allowed,” said Schlebach. “These miners have been running rampant for far too long. They have mostly got away with it because the area is so remote it is a case of out of sight, out of mind. We aim to change that.”

It is highly probable that MSR would not be allowed to conduct similar mining activities in Australia. “To propose to dig up 50km of the most pristine and beautiful untouched beaches is overstepping every boundary,” said Durban’s Grant “Twiggy” Baker, a 2017 world big wave champion, West Coast regular and founding PTWC board member. “Imagine if this same proposal was to restrict access and dig up every beach on the Australian west coast from Cape Mentelle to Cape Leeuwin. This is exactly what we are dealing with here.”

The Centre for Environmental Rights has recently launched an administrative appeal of the decision to approve the expansion of the Tormin mine. It has also launched a judicial review in the high court to set aside Creecy’s refusal to uphold an appeal against the environmental authorisation issued to Tormin to allow the mining on the 10 beaches and the inland mining area.

PTWC hopes to build on appeals such as these and to combine all of the efforts of current activist organisations, including the Western Cape First Nations Collective,  and journalists, researchers and academics. Thousands of private individuals responded to its first major campaign for support and volunteers.

“The public needs to know what these mining companies do,” explained Schlebach. “Part of the criteria for being given the rights to mine is that the miners rehabilitate each mining location once they are done. This, however, doesn’t always play out and the mess is often left for someone else to clean up – or not. These are highly diverse, ecologically sensitive areas on land and in the sea that are being completely destroyed.”

The PTWC began in late November with a petition to Creecy. Its awareness campaign aimed to increase public appeals against the authorisation granted to MSR to prospect on land adjacent to the Olifants estuary.

Protect The West Coast is just getting started and the organisation is planning many more interventions. “In humanity’s global quest to protect natural open spaces,” said Schlebach, “corporations and mining companies have to start considering the good of the planet.

These areas are far more valuable being protected – they are for future generations. It is time for change and it is time for us all to put the natural world first and foremost before it is too late.” DM168