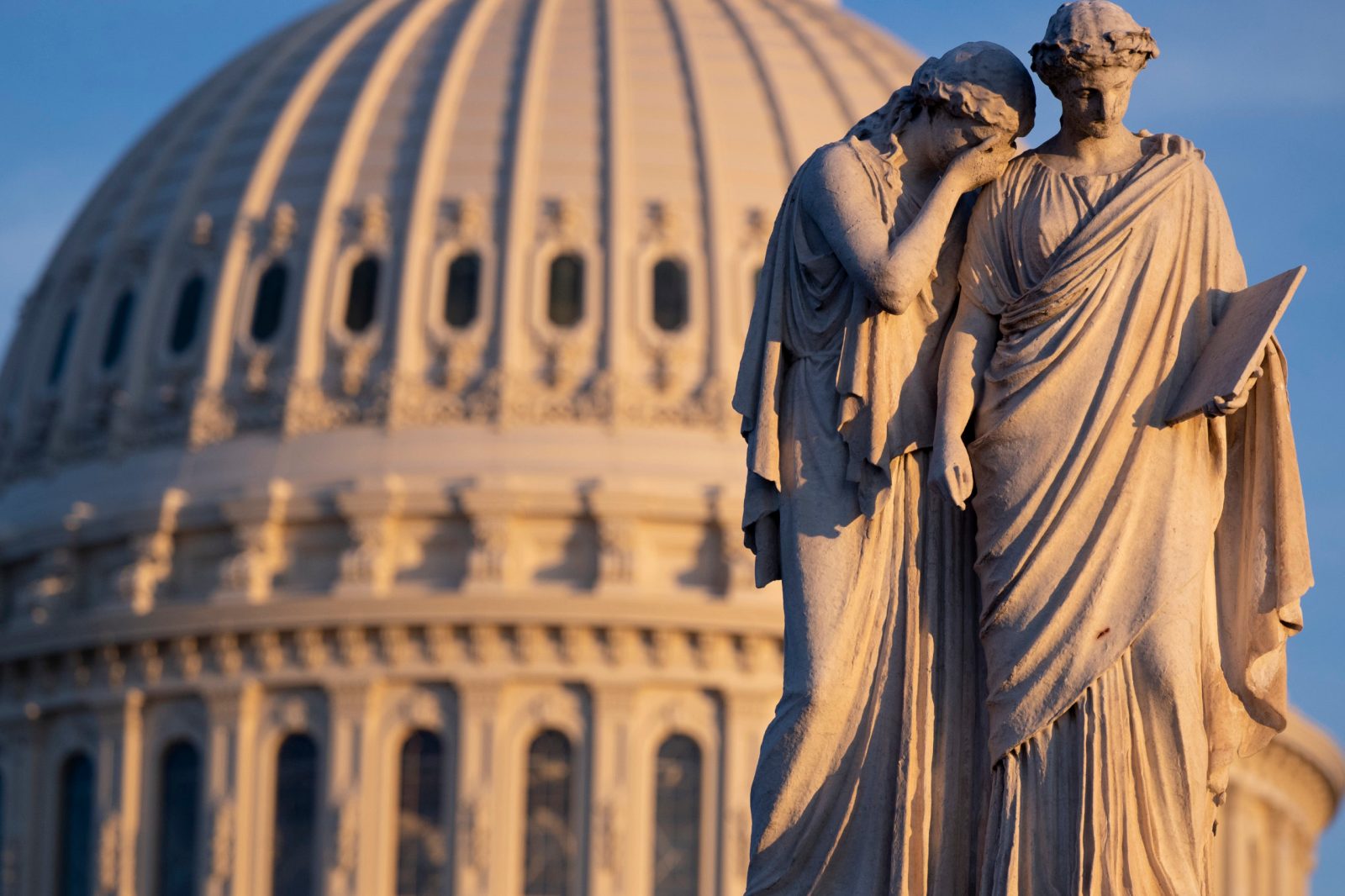 'The Peace Monument' is seen at the West Front of the US Capitol the day after Trump supporters stormed the US Capitol, in Washington, DC, USA, 07 January 2021. A mob of Trump supporters rioted at the US Capitol, storming inside the building, as Congress began counting the electoral college votes. Despite efforts by the mob to stop it, Congress certified Joe Biden's presidential election victory over US President Donald J. Trump. EPA-EFE/MICHAEL REYNOLDS

At least 55 people have been charged in connection with the siege on Capitol Hill – eight face weapons charges, one of whom had 11 Molotov cocktails and a semi-automatic rifle. Three Capitol top cops have resigned amid fierce criticism of the police response to the mob.

The death toll from the Trump-incited riot at the Senate building on Capitol Hill on Wednesday now stands at five after the announcement that a policeman who had been pulled into the mob and assaulted has died from his injuries. Another policeman, whose face was seriously injured, is still in hospital.

A woman who was part of the mob was shot and killed as the rioters surged into the building. She was later identified as Ashli Babbitt of California, a 35-year-old army veteran who had spent 14 years in the Air Force.

Pandemonium broke out on Capitol Hill after President Donald Trump urged his supporters to march up to the House, when he addressed them a short distance from the Senate late on Wednesday morning.

This is a key element behind the calls for resignations of senior Capitol Police members – the fact that it had been known for weeks that Trump was hosting a protest against the Electoral College vote certification, on the day and within almost spitting distance of the certification “venue”. Yet the police were alarmingly unprepared and visibly understaffed. Law enforcement has also come under fire for its “kid-gloves” treatment of the overwhelmingly white rioters.

Gus Papathanasiou, the head of US Capitol Police Union, said the lack of planning endangered officers who did not have the proper gear or back-up to deal with the mob.

US Capitol Police Chief Steven Sund, House Sergeant at Arms Paul Irving and Senate Sergeant-at-Arms Michael Stenger are all resigning after the break-in and vandalisation of the Senate on Wednesday when Trump supporters tried to stop the certification of the Electoral College vote, the last step in affirming Joe Biden as the winner of the election.

The rioters did manage to stop the certification, but only for a few hours. The house came back to reconvene about five hours after the mob first stormed the steps, and security had cleared the Senate floor, with senators and staff – including Vice-President Mike Pence – being rushed to safety. The Senate floor was breached minutes later.

Members of the Secret Service barricaded the doors to the Senate gallery, after the insurrectionists blocked the stairs and tried to enter the gallery. On the Senate floor Trump supporters took selfies and trophies/souvenirs.

Trump supporters had gathered late on Wednesday morning at the Ellipse, about 2.5km from Capitol Hill, for a “Save America March”. The event started with various speakers including Donald Trump Jr and Trump’s lawyer, former New York mayor Rudy Giuliani, addressing the crowd before the main speaker – Donald Trump – appeared.

Trump repeated his baseless claims of the election being stolen and told the crowd they should all march up to the Senate buildings and “if you don’t fight like hell you’re not going to have a country anymore… This is a time for strength.”

He also told his supporters he would go to the Capitol. But he did not.

DC’s Metropolitan Police have confirmed that 82 people have been arrested so far – 14 by Capitol Police and 68 by the DC police. About 54 police officers were reported to have been injured during the riot.

Capitol Police Chief Sund, whose resignation takes effect on January 16, said law enforcement officers were “actively attacked” and “the violent attack on the US Capitol was unlike any I have ever experienced in my 30 years of law enforcement, here in Washington DC”.

House Speaker Nancy Pelosi was among those who had called for Sund’s resignation. She praised the Capitol Police, saying many of them “just acted so bravely”.

Pelosi made it clear that the problem was with the (lack of) leadership: “There was a failure at the top of the Capitol Police.”

The acting US Attorney in Washington, Michael Sherwin, told a media conference that more charges are expected. Besides the weapons charges, suspects have also been charged with assault, unlawful entry and theft.

Sherwin said this was a good start, but that hundreds of investigators are searching social media to find incriminating photos and videos, which could lead to more arrests.

The Justice Department is also looking into whether sensitive documents were stolen from the Senate and the offices – including Pelosi’s – that were broken into.

The FBI has called on the public to come forward with “tips and digital media depicting rioting and violence in the US Capitol Building and surrounding area.”

Meanwhile, calls to invoke the 25th Amendment are growing louder. Pelosi has joined Senate Majority Leader Chuck Schumer in calling on the vice-president to remove the president via the amendment.

Section 4 of the 25th Amendment allows for the vice-president, with the support of the majority of the House, to remove the president: “Whenever the Vice-President and a majority of either the principal officers of the executive departments… their written declaration that the President is unable to discharge the power and duties of his office, the Vice President shall immediately assume the powers and duties of the office as Acting President.”

Schumer said on Thursday: “This president should not hold office one day longer.”

Pelosi told a media briefing: “Yesterday, the president incited an armed insurrection against America… In calling for this seditious act the president has committed an unspeakable assault on our nation and our people. I join the Senate Democratic leader in calling on the vice-president to remove this president by immediately invoking the 25th Amendment.” DM