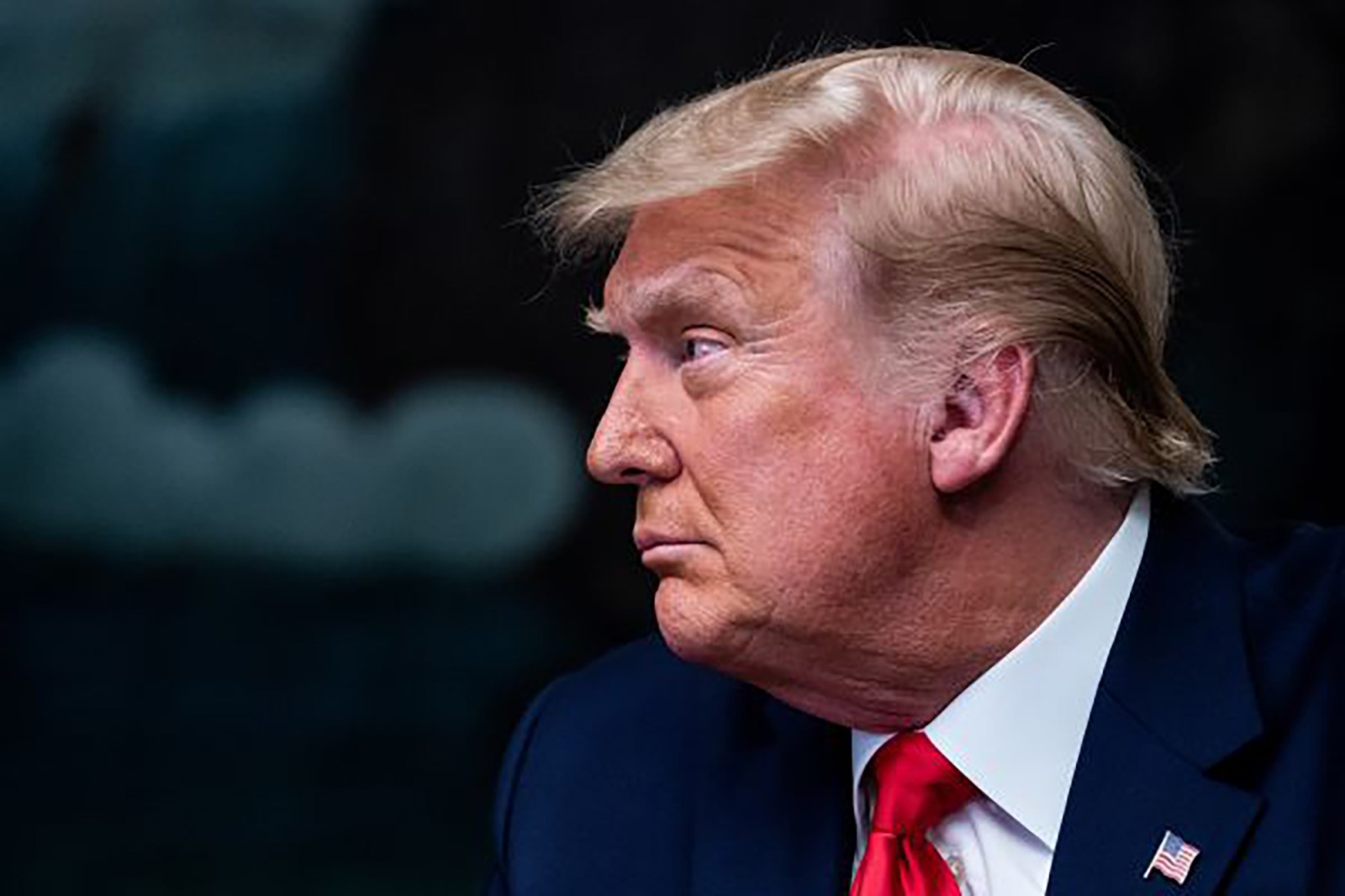 We couldn’t have imagined that a US president would bring darkness to the world. Come 20 January, let the sun shine in.

He’s a hairy guy, Trump. His hairiness is a fright. Not as in hirsute, or a longhair hippie (he’d sooner shoot them in Fifth Avenue). I mean in the sense of somebody who is scary to be around. Like Attila the Hun. Of whom trembling Huns and the odd quivering Ostrogoth surely once said: “Yoh, that Attila is one hairy guy, hey?!”

Trump is hairy noon and night, whether sulking in the West Wing, lying at a White House press conference courtesy of the soulless glare of Kayleigh McEnany, midnight-tweeting about whatever Biden did or Fox News said, or dissing ‘Kamaaaala’ despite her transparently Teflon nature.

We couldn’t have imagined that when the Moon was in the Seventh House, and Jupiter aligned with Mars, rather than peace guiding the planets and love steering the stars, a US president would deliver an inauguration speech so dark that historians would see it as one of the most ominous in history. A speech that ground hope underfoot and quenched any vestige of light. Since that day, darkness has sprung forth everywhere Trump has walked.

Peace. Love. Freedom. Happiness? Why pursue such inanities when they don’t bring you more of other people’s money, or offer you a way out of paying taxes? Harmony and understanding; sympathy and trust abounding; no more falsehoods and derision? The only trust you know, Mr Outgoing President, is a fund, the only sympathy you have is for yourself when your ratings aren’t good. If you heard harmony in a song it would pass you by. Falsehoods and derision? You score right there, if we leave out “no more”. Deriding others is in your DNA, spouting falsehoods your second nature.

Having never read anything, and possibly never bothered to watch a movie other than Walt Disney’s Pinocchio, you should be told that the above references are to the film version of Hair, the musical that is an exemplar of the hippie generation and its anti-war ethos; the sort of stuff that used to piss off your predecessor, Richard Nixon. In it, longhairs hang around in Manhattan’s Central Park trying to evade The Man and the draft, into which one day strolls Claude Bukowski, a bright-eyed draftee from Oklahoma en route to Vietnam. He’s an innocent, lost in the Big Apple and a world foreign to him.

We might imagine Claude as the archetypal Trump follower, viewing the world from his limited perspective, and just not getting those liberal weirdos and longhaired losers. If you pitted the Marine against the Hippie, director Miloš Forman’s Hair is what you’d get.

George Berger and his band of hippies pull Claude into their fold, and we examine our own belief systems. We can be fairly sure where you would be, Mr Outgoing President, and that your devotees would be rooting for the General in the movie’s searing denouement (it means what happens at the end), screaming at his serried charges, soon to be off to the war, while the hippies blare rock music through the parade-ground loudspeakers.

It’s a superb metaphor for the millions raging at you in our day, and you raging back with most of us not paying attention, or trying not to hear you. But those who want to hear the General do, and we can pick them out in the ranks instantly.

Central Park is a place where all worlds meet. Democrats, Republicans, rich, poor, mighty, lowly, we might all brush past one another there. So it’s not outlandish that Berger’s troupe and Claude should encounter Sheila, an heiress on horseback for whom Claude falls like a ton of Four Seasons Total Landscaping parking-lot asphalt.

Berger and the crew gatecrash Sheila’s debutante party, awash with what appear to be filthy rich Republicans, the sort of people Trump adores and who adore him right back or go along with it for fear of the GOP losing power. Sheila doesn’t see the hippies as her father or Trump would, but as people who seem to have a story to tell. Claude, meanwhile, is trying hard not to doubt his ingrained belief that the draft is right, to go to Vietnam is right, his dad is right, the system is right … but circumstances are to dictate his future. Claude is not one to cry, “Bone spurs!”, Mr Outgoing President. He’s happy to be Nixon’s cannon fodder.

Berger dances on the table in front of Sheila’s appalled guests, with his “million-dollar charm, cousin”, in the song I Got Life.

This ragamuffin hippie expresses more joy in his “I got my hair, I got my head, I got my brains” than you have in your life. There’s been not a glimpse of joy in any utterance or tweet. You tweet your darkness above us, we tremble below.

A hawkish man at the debutante party pulls a suited scion aside and commands him to go up to “the coloured gentleman” and find out why he’s at the party. He asks him, “Are you supposed to be here?” One tiny moment reveals everything about the racial imparity and misunderstanding of their time and ours. This room of white fatcats interrupted by unkempt hippie peaceniks and draft dodgers, a dulling reminder that little has changed.

Another song, Easy To Be Hard, shows the counterpoint of Hud, a member of Berger’s crew who left behind the mother of his baby to hook up with another woman. Hud was the “coloured gentleman” at the party. The woman he left behind stands in the park and sears her pain right into your heart. She calls Hud “my Lafayette”, and they try to walk away as she sings after them, “How can people be so heartless?”

It’s a disjunct between the straights and the hippies, a tug of war between her and her Lafayette but also between the haves and have-nots, the mighty and the meek, the establishment and those who, in our time, protested outside the White House only months ago while Trump crossed the road and held a Bible for a photo op.

So, here we are, just weeks from 20 January, when many will rejoice, and you will trudge wearily from your home of the last four years, your long coattails sweeping the dust of your deeds behind you, your overlong tie fading like dye from orange hair.

When I rewatched Hair, I thought of you. When Cheryl Barnes sings “how can people be so heartless, how can people be so cruel …” I thought of George Floyd, struggling to breathe at the kerbside; of kids in detention on the Mexican border. I thought of every sucker (not loser) who has ever voted for you, worn a MAGA hat, been crowd-rented to keen at the camera behind you at a rally, or who has denied Covid even while dying of it, and I blame you.

The most chilling moment is when a ruse to get Claude to have one last tryst with Sheila goes wrong, and it is Berger who is in the ranks marching aboard the troop carrier. He enters the plane to be swallowed up in blackness, a stark visual metaphor. The moment was not in the stage play, so it could be seen as the moment that Forman Made Hair Great Again. At least someone kept his promise.

You may see Berger, Hud and the gang as no-good hustlers who need to brush up and make a living. Like you, right? With your millions “earned” as a toddler.

Like Hud and Berger, you hustle your way through life. But you profit off others’ taxes or wealth, connive with really bad people, bend the rules, even the law, and if nothing else, well, let’s have an executive order or a presidential pardon.

Soon, just as at the end of Hair thousands of peaceniks descend on the White House to protest, singing Let The Sun Shine In, may crowds sing and dance there to celebrate your going. May blackness engulf you as you exit the presidency, as it engulfed Berger when he entered the plane to die in a war, and may light shine into the White House as your tailcoats swish morosely into oblivion.

And with that, may I have the honour of bestowing on you Daily Maverick’s inaugural Trumpian Award, an award for losers like you who lie, beg, borrow and steal to cling onto power. We left it in a brown paper packet over there, in the parking lot, between the adult bookstore and the crematorium, because we don’t want to get too close to you. Covid safety rules, you understand. DM168