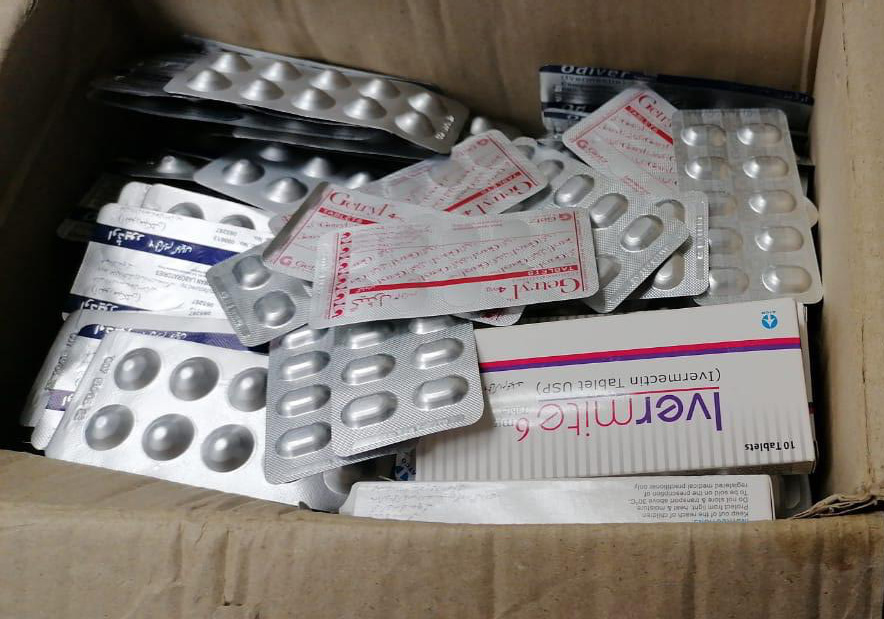 The South African Police Service ( SAPS) has arrested a 43-year-old man for being in possession of Ivermectin tablets worth a market value of R100 000. Photo: SAPS

A recent arrest at King Shaka International Airport involved a man found in possession of ivermectin, a drug lauded as a ‘miracle treatment’ for Covid-19. But the drug, banned from import by the local drug regulator, has not been proven safe or effective in treating or preventing the disease. Now there are fears a black market may emerge for the medication.

A 43-year-old man was arrested at King Shaka International Airport on Monday after being found in possession of ivermectin tablets worth R100,000.

Police said the man, who had flown in from Dubai, had 2,464 ivermectin tablets in his hand luggage. He has appeared before the Verulam Magistrates’ Court charged with possession of unregistered medicines and importing medicines without a valid permit.

Ivermectin, which is widely used to treat and control parasites in animals, has been touted by some healthcare professionals as a “miracle” treatment for Covid-19. It has gained popularity in India and Latin American countries such as Brazil and Peru.

However, the drug is not approved for human use in South Africa, but is used to treat several tropical diseases in humans which are uncommon to the country. The South African Health Products Regulatory Authority (SAHPRA) occasionally grants Section 21 permits for the use of “topical Ivermectin” as an “unregistered product” to treat individual patients with conditions such as scabies and head lice.

In December, the regulatory authority said any attempts to import the drug would be seen as unlawful. It said on 6 January there was no evidence to prove the safety and efficacy of ivermectin. Definitive clinical trials to support its use in treating Covid-19 are also lacking.

Additionally, the body has not received any applications for clinical trials or to register ivermectin for the treatment or prevention of Covid-19.

SAHPRA chairperson Professor Helen Rees said larger clinical trials of the medication are ongoing and the results are expected in the first quarter of 2021.

It isn’t the first medication to garner attention as a possible lifeline against Covid-19.

“If you cast your mind back, people were feeling the same way about chloroquine and studies showed it didn’t have an effect. We’ve looked at things like antiretrovirals, chloroquine, hydroxychloroquine, remdesivir – these are all existing medicines and they’ve been identified as having the potential to have an effect,” Rees told Daily Maverick.

But well-designed, randomised trials are needed to prove their efficacy and conclusive data are scant.

Lab studies have found that ivermectin can inhibit the SARS-CoV-2 virus’ ability to multiply in the body, although SAHPRA says administering standard doses of the medicine would be ineffective while high doses may result in “unacceptable toxicity” in patients.

On social media claims have been made that ivermectin has cured people of Covid-19.

Recently, the state was threatened with court action for banning the drug. The National Freedom Party (NFP) was pushing for the government to approve, procure and administer the medication to citizens. This was before the Department of Health announced it had secured a deal for vaccines set to arrive this month. The African Christian Democratic Party (ACDP) threatened similar action.

Rees is worried that people taking an unregulated product like ivermectin are putting themselves at risk.

“I think the concern is that when people smuggle things in, you’re buying things that are not approved by the drug regulatory authority. You have no idea what you’re buying. There have been reports of overdosage, people being admitted to hospital with this product because there’s clearly no indication, there’s no dosage and so on.”

And the side-effects can be severe.

And there are concerns a black market may emerge for ivermectin.

“Everyone understands the desperation that we’re seeing – our numbers are shooting up, GPs, especially on the frontline, are diagnosing people positive and have nothing to offer them other than monitoring them,” said Rees.

On Thursday, authorities raided Ahmed Al-Kadi, a private hospital in Durban, after receiving a tip-off that the hospital had been prescribing and dispensing the medication. No ivermectin was recovered from the hospital but authorities found proof it had been there.

To date none of the regulatory bodies with which SAHPRA has reliance agreements has recommended ivermectin. These include the US Food and Drug Administration, the European Medicines Agency and the UK’s Medicines and Healthcare products Regulatory Agency. DM