Everyone has a plan until they start lobbing stun grena... 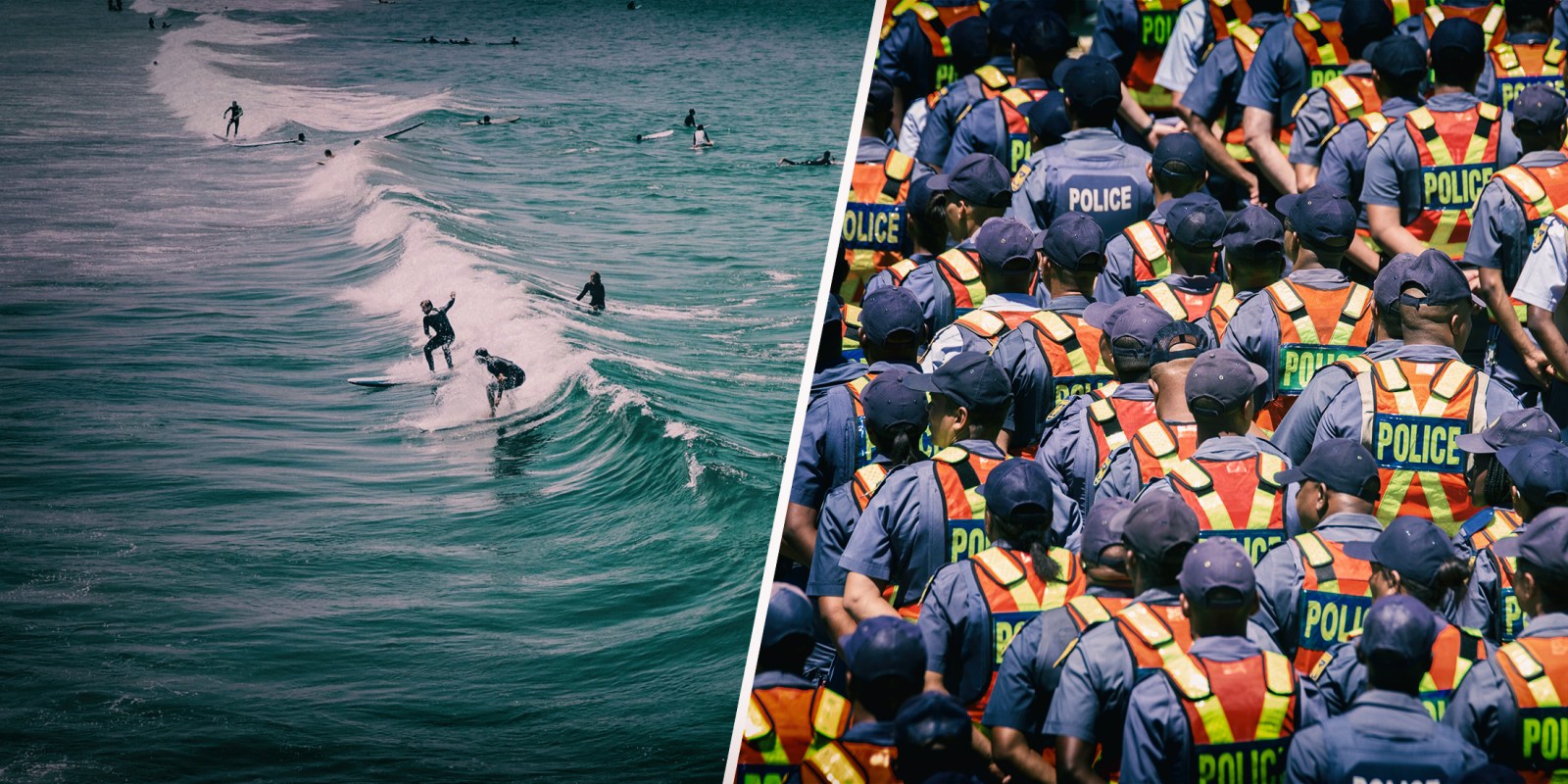 A right-hand point-break is a wave that breaks from right to left, looking out to sea. It generally breaks over rocks, usually along a cape or headland, in a regular procession of waves, and is the most favoured sort of waves for surfers. A beachbreak, on the other hand, is just that, a wave that breaks at a beach. Usually predominantly sand. A beachbreak is the safest sort of wave and is currently part of the country’s beach closure regulations.

Until recently there has been a mish-mash of proceedings in the Eastern Cape. This is mainly because there is so much going on. Some surfers were fined in the St Francis area and in JBay, some had their boards confiscated, and some found themselves in the charge office. Others were let off with a warning, while others had a blind eye turned as long as things were stable and not out of control. It was very much mutual respect going, with interaction and ongoing communications between the police and the public. Low key and with common sense prevailing. That is all that we want out of this repugnant situation really, just a smidgen of common sense prevailing. Well, let’s see how that turned out.

Things were going quite swimmingly, so to speak, in Cape St Francis, with no snitching, no dramas and everyone being decent. Except for a few well-known exceptions, everyone minded their businesses. That was until a few TikTok videos like this started circulating. So much for beach closures.

@brandonvaljaloI thought all beaches were closed??♬ I want you to shut up – 🌻tegan marais🌻

In an unconfirmed rumour, a video, possibly this one or one like this, made its way to a local police forum meeting. Still live, and at 676k likes, the video has done well. However, the outcome of that police meeting would have been relatively poor for all involved, for obvious reasons. Following that meeting, the rumours were out that the shit was well and truly on the R300, and headed straight for the fan.

Yesterday, (5 January) at around noon, a local surfer Misha G went to the beach to look. It was pretty quiet and seemed relatively empty, so our friend Misha decided to go and mind-surf a few waves from the safety of his bakkie.

“It was small and onshore, and it looked quite good, so I thought I’d just go and have a look at what I was missing,” said Misha of his mission.

When the wind goes onshore, the waves get ruffled and affected by the wind. It’s not ideal for surfing, but one can still surf.

When he got there, he found the main surfer’s car park cordoned off by a police van. “It was a bigger van, like a 10-12 seater, and there were a few cars blocked off in the car park,” recalls Misha.

“About five or six cops were sitting on the beach by the surfer showers,” said Misha, and there were two standing in the car park. I saw one of the guys throw something that looked like a rock at the surfers, and I thought, ‘what are they doing? Why would a cop throw rocks at the surfers? That’s not going to work.’ ”

The “rock” landed about five metres shy of the water’s edge, with plenty of exposed rock due to the low tide. “It landed on the rocks, in line with the police sitting on the bench,” recalls Misha.

The first stun-grenade explosion shook his car. The second one which followed immediately afterwards he could feel in his chest.

“It was this loud, booming explosion,” said Misha, “and it was pretty intimidating. It gave me a shock because I wasn’t expecting it; it was just such a surprise. I could feel the shock wave.”

With smoke in the air and with cops waving, the two surfers, an older guy and a younger guy started moving.

“First developed for military use in the 1960s, stun grenades are designed to temporarily disorient their targets without causing severe physical harm. They accomplish this by releasing a flash so bright that it temporarily blinds those close by, and a bang so loud that it renders listeners deaf and off-balance. They are designed to split, rather than fragment, and are partially made of cardboard to minimise bodily harm.”

The SA Police’s new weapon of choice: The stun grenade

While the beaches are closed, Cape St Francis is still a holiday town with young kids around. Older people were walking their dogs with their masks on and doing all the right Covid protocol stuff. The explosions saw people heading down to the beach in numbers to see what was going on in various agitation and distress levels.

“It turned into a bit of a traffic jam, and then the cops started eyeing us out,” recalls Misha. “We all kinda dispersed, and I don’t even know what happened to the surfers. They headed down the point to get out, I’m sure.”

The thunder flashes video can be seen here, with some fine commentary from the legendary Mr Deon Bing:

It’s easy to sprout the wisdom of common sense, and it is just as easy to lament the fact that our rules are abhorrent and asinine, but please don’t try and be a hero. Whether they have the authority to throw stun grenades around or not is another conversation. Regarding the beaches and surfers, the police are merely doing their jobs in trying to flatten the curve. There are no apparent vendettas involved. They are obeying their orders from above and doing what they have to do. Common sense, however, is most definitely not prevailing.

If you must surf, it’s probably better to do it in the *dawnie, or the late evening surf. Don’t surf the point if it is “in the eyes”, rather surf one of the quieter beachbreak corners nearby. DM

*A dawnie is the first session of the day. Surfers like to be in the water a few minutes before there is light. It is generally a ghastly hour, and there is no one around. A “point” is a wave breaking along the headland. It is “in the eyes” because it is usually the focal point of any beach set-up.

Here is South Africa’s version of Chariots Of Fire for a lighter side to the whole beach/surfing travesty. That cop in the front is #fasterthanCaster but needed a pacesetter. After a spirited attempt he agonisingly runs out steam at the finish, and the surfer gently trots away to freedom: https://fb.watch/2RxqRxUc-7/