US Capitol in lockdown after being stormed by pro-Trump protesters 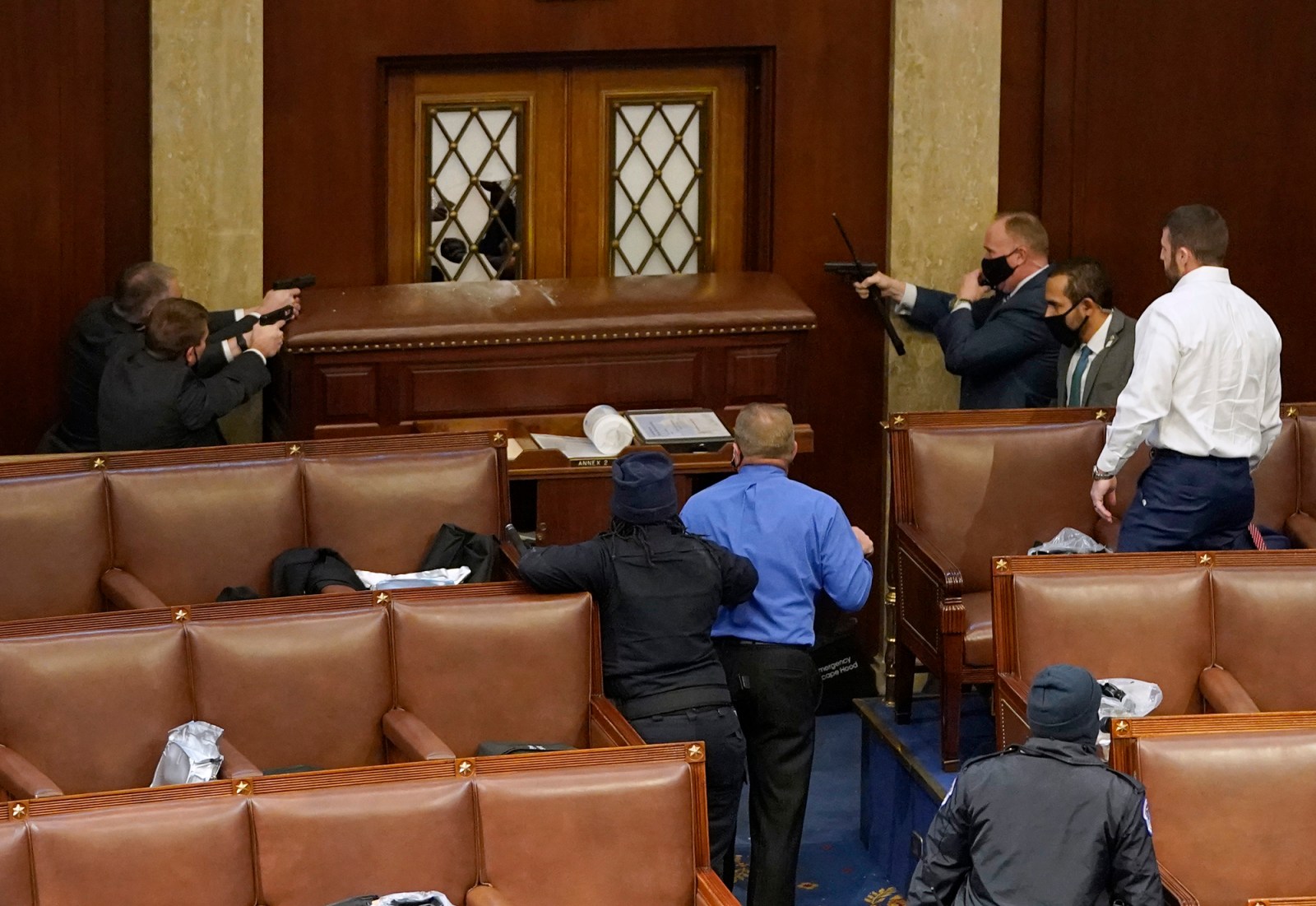 Capitol police officers point their guns at a door that was vandalised in the House Chamber during a joint session of Congress on 6 January 2021 in Washington, DC. (Photo: Drew Angerer / Getty Images)

The US Capitol was placed under lockdown on Wednesday and Vice President Mike Pence left the floor of Congress as hundreds of protesters swarmed past barricades surrounding the building where lawmakers were debating Joe Biden’s victory in the Electoral College.

In a series of chaotic scenes that included lawmakers grabbing their gas masks and loud booms echoing across the Capitol complex, protesters rallying in support of Donald Trump overwhelmed police barriers at the US Capitol in Washington, DC, after the president said he’d “never concede” his election loss and some congressional employees were initially told to evacuate following bomb threats.

Lawmakers fled the House chamber. Vice President Mike Pence was evacuated from the Capitol, according to CNN, and debate over Joe Biden’s victory was suspended.

Dozens of Trump supporters were seen walking through portions of the closed Capitol – as lawmakers lined up to be escorted out of the House chamber by police and toward more secure areas.

Police reinforcements in riot gear undertook crowd control measures, including the use of pepper spray.

After protesters broke into the Capitol, Trump urged his supporters via Twitter to “support our Capitol Police and Law Enforcement” and “stay peaceful!” But it was too late.

Before the Capitol was breached, a notice sent to staffers on Wednesday at the Cannon House Office Building, across the street from the Capitol, told employees to “move in a safe manner to the exits” and “proceed immediately to your designated assembly area” following bomb threats. The notice was later retracted.

The developments come on a day of already high tension in Washington. Thousands of people gathered in the city, including at a park south of the White House, in support of Trump as Congress prepared to seal Biden’s victory in the November election. In addition, the results from two runoff elections in Georgia suggested Democrats may retake the Senate, adding to frustrations felt by the president’s backers.

Leaning on debunked theories of a rigged vote, Trump addressed his supporters near the White House for over an hour, exhorting them to “stop the steal” and make a stand for his presidency.

“All of us here today do not want to see our election victory stolen by emboldened, radical-left Democrats,” Trump said at the rally. “We will never give up; we will never concede.”

After his speech, a crowd began marching up Pennsylvania Avenue toward the Capitol. Among the leaders of the march was Alex Jones, the conspiracy theorist who has long promoted Trump on his InfoWars show and podcast.

Trump supporters waving flags and wearing red “Make America Great Again” hats at a morning rally in the Ellipse adjacent to the White House said they were there because they believed Trump was being illegally denied a second term.

“The election was stolen and we have to do something to save the country,” said Colleen Murphy, 53, who traveled from Wisconsin for the rally. “I think Trump has a trump card up his sleeve.”

Sporadic violence between pro- and anti-Trump protesters occurred in Washington, DC, just after the November election, before all the states had certified their votes. Officials worry something similar could happen this week, especially if protesters from both sides confront one another on the streets.

While the counting of the Electoral College votes in Congress is largely symbolic, a group of Republican lawmakers vowed to contest the results, delaying completion of the count into late Wednesday or even Thursday morning.

A 37-year-old woman from New Jersey named Lauren – she declined to give her last name – said she believed the November election was rigged by China’s Communist Party.  DM