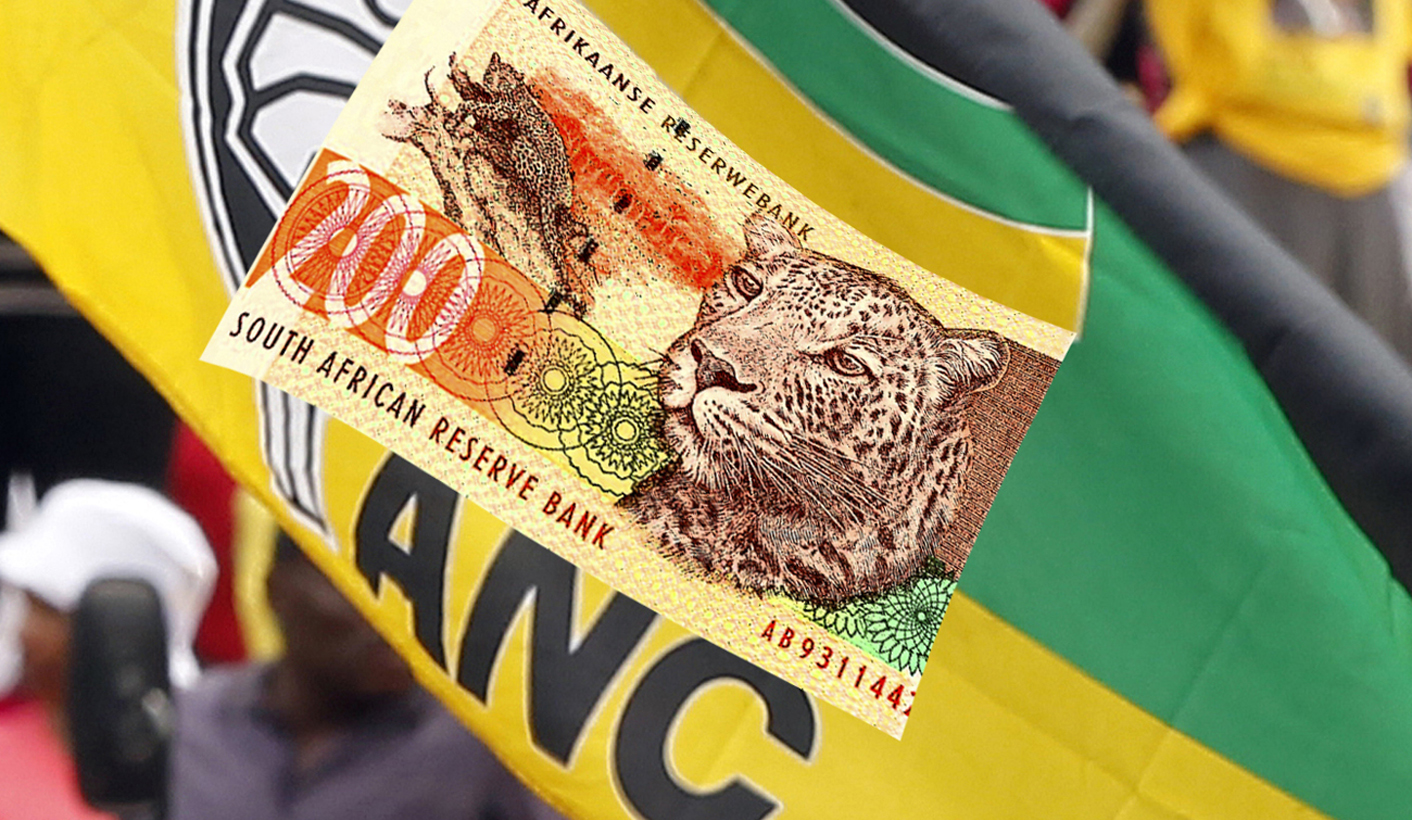 The ANC’s January 8 address widens the gap between Ramaphosa’s two political personalities: the Cyril of the Union Buildings and the Cyril of Luthuli House.

My editor, Branko Brkic, tries to prod me into researching and covering the ANC January 8 statement and I’m intent on hot-tailing on to the vaccine beat instead.

As a political animal, the governing party’s January 8 statement has historically been a pace-setter. Now, it has become a jamboree revealing the degeneration of the ANC. It breaks my heart every year, which explains my hesitation to pull up my sleeves and get ready for it.

When the party was a liberation movement, the address set the tone for the year. Broadcast from Radio Freedom in exile, its leaders would instruct cadres outside and inside South Africa. Via a crackly broadcast, they set out the year’s campaigns in methods of political intellect that are still studied avidly today. These kept chins up as the Boers tightened their hold on apartheid South Africa and increased repression.

It was a vital address to listen to, with its focus on liberation – it kept hope alive and strengthened spines for struggle. Fast-forward to the present day and it is a shadow of what it used to be.

President Cyril Ramaphosa will this week deliver his fourth January 8 statement and each time it widens the gap between his two political personas: the Cyril of the Union Buildings (the seat of government) and the Cyril of Luthuli House (the governing party headquarters).

As South Africa’s president, his administration is very different from the kleptocratic regime of former president Jacob Zuma. The broken state Zuma left us turns our lives upside down (as it is doing in the vaccine debacle), but it would be only the most churlish of citizens who cannot acknowledge Ramaphosa’s efforts at reform. He is pragmatic and a hard-grafting president.

But as the ANC president, he does a constant egg dance across the factions seeking to unseat him. The January 8 statements Ramaphosa has delivered were a tortured melange of nationalising the SA Reserve Bank (a non-debate given that private shareholders do not influence monetary policy), or land expropriation without compensation (the legislation is nowhere near passed). He sent the economy into a tailspin by pledging prescribed assets in one January 8 address – after a decade in which the ANC tenderpreneurs prescribed billions of rands of national assets for themselves.

The president sprinkles his January speeches with rhetoric about “radical socioeconomic transformation”. It’s ill-defined claptrap by a government that could, but hasn’t, for example, fought for a Trips waiver and drug-pricing regimens that could make vaccine manufacturing cheaper and more live-saving across the world. Now that would be radical economic transformation.

This year, the ANC has cancelled its annual January party because of Covid-19, so the address will be virtual and thank God for that.

Besides the political vacuity of the addresses today, it’s the dominant culture of them that is so revealing of what the ANC has become.

The last time I attended was the Durban gathering in 2019, although they have become a set-piece. It was a jamboree and a fleshpot, and revealed the Gini coefficient or wealth gap at the heart of the ANC’s darkness.

Buses with branch leaders arrive from around the country and delegates either sleep in them or at budget hotels. I sat in the bleachers of Moses Mabhida Stadium with branch members from the city, and they brought their own lunches and cooldrinks. While not wholly enamoured with Ramaphosa (it was Zuma territory after all), the members listened intently to how the ANC might change their lives.

It is still a party of hope for the majority of South Africans.

The big bosses, on the other hand, arrived in a dazzling array of supercars, usually black and shiny (or, horrifyingly, yellow and shiny), where a Range Rover Sport with an average starting price in the millions is the entry-level car.

They sat in the stadium’s VIP boxes, bumping shoulders and calling each other “leadership”, a term that has replaced “comrade” when the top dogs speak to each other. Yuck!

“Leadership” stayed at Zimbali or the Hilton or the Oyster Box, hosting afterparties where expensive booze is bought by the bottle or the case. Remember that the country was already in recession by then and that unemployment has stubbornly been higher than 40% for many years.

Many of the cars were festooned with black, green and gold balloons or stickers, and the bosses wore yellow ANC golf shirts which, truth be told, often struggled to make their way over good-life potbellies.

There are still many people with laudable political values in the ANC and they won by 179 votes at the party’s Nasrec conference three years ago. But the culture of the January 8 addresses makes me wonder if the idea of a moral regeneration or renewal of the ANC really won at Nasrec or whether it was Ramaphosa’s fat kitty of R500-million that did the job.

It was an ostentatious show of wealth and power, a symbol of how political entrepreneurs win massive tenders and then fund party events.

As a woman who learnt her feminism from the ANC and its allied mass democratic movement organisations in the Struggle, the gendered relations on show were breathtaking to me. I grew up on the boundaries of the movement where women like Jessie Duarte, Elinor Sisulu, Amina Cachalia and Sophia de Bruyn instilled the animating ideas of comradely equality between men and women.

It’s all sorts of messed up and tells tales of youth unemployment, the profits of political entrepreneurship and what dominant values are held up as success in the ANC today.

That Durban meeting took place in a city where you can read every day about how the municipality steals money meant for its citizens. The former mayor Zandile Gumede is on trial for her alleged role in corrupting a solid waste tender. Even poo has become commoditised for political profit. This year, the ANC’s secretary-general, Ace Magashule, the official who is the face of the January 8 address, is about to go on trial for corruption.

To read Chimamanda Ngozi Adichie is to know the danger of the single narrative and I am mindful of that, being a political reporter.

There are still many people with laudable political values in the ANC and they won by 179 votes at the party’s Nasrec conference three years ago. But the culture of the January 8 addresses makes me wonder if the idea of a moral regeneration or renewal of the ANC really won at Nasrec or whether it was Ramaphosa’s fat kitty of R500-million that did the job.

At the end of the address, the ANC high command blows out the candles on a big yellow, green and gold cake and pops Champagne – the day is the birthday of the party’s founding in a simple church in Bloemfontein in 1912. The masses cheer, waiting, waiting, waiting for their moment in the sun. But for how much longer?

One of the reasons the ANC is Africa’s oldest liberation movement is that it is a broad church of different interests. It has always been proficient at managing its internal contradictions.

But, in Durban, as I sat in the umpteenth queue to get through security, I pondered on when those contradictions become too combustible to coexist with each other. In making its finding that Magashule must step aside as party secretary-general while he is facing the graft charges, the party’s Integrity Commission reflected similar thinking. It said that party unity (of the broad church) could not supersede principle, morals and integrity.

Perhaps the gaps between the rank and file and “leadership” explain why big ANC events are so highly securitised. To get accreditation, you need a national security clearance. In Durban that year, almost every cop in the province appeared to be on duty at the party event. When Ramaphosa did his walkabout, he was surrounded by a security detail of at least four circles of burly men. What is the party so scared of? Or is it a show of raw political power by a party that only has to listen to old January 8 broadcasts to reveal to itself how far it has strayed from its original values? And when you move that far from your values, you need a carapace to protect yourself. From yourself. DM