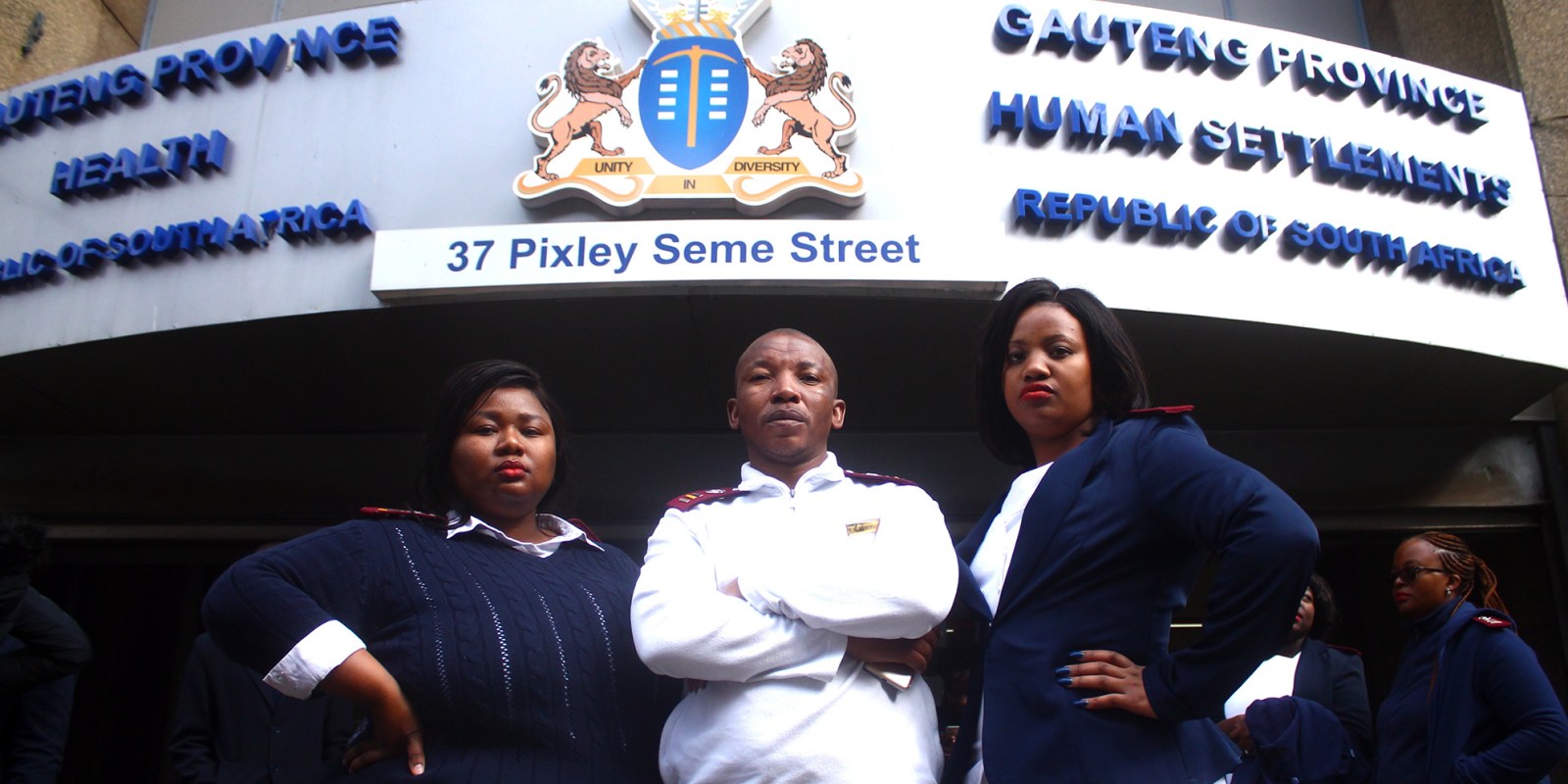 The nurses told Daily Maverick on Wednesday that they had been assured that a budget for the community service nurses was available. (Photo: Gallo / Sowetan / Kabelo Mokoena)

Community service nurses in Gauteng whose contracts were suddenly terminated are feeling a combination of relief and apprehension after the provincial Department of Health’s promise to hire them.

Nurses told Daily Maverick that they were told by their managers on 30 December not to bother coming to work the following day as their contracts had been terminated.

However, some nurses added that they were apprehensive of the Health Department’s promise to hire them because they had failed to obtain a written guarantee of this.

“On Monday we had a sit-in, which started at the Charlotte Maxeke Academic Hospital. We were trying to get the CEO to prove it in writing that they were terminating the nurses’ contracts as such action would inform our next move,” said Democratic Nursing Organisation of South Africa (Denosa) national student chairperson Nathaniel Mabelebele.

The hospital CEO refused to provide a written acknowledgement of the termination of their contracts, and so they proceeded to the provincial Department of Health offices in downtown Johannesburg.

“Termination of the contracts was by word of mouth. Imagine waking up for work one morning and the assistant manager calls you and says, don’t come to work because you are no longer employed,” said Mabelebele.

Nurses said this was what prompted the sit-in at the Department of Health on Monday. At the provincial health department, they were met by a chief nursing officer who told them that the department had decided to absorb all 983 of them.

“It was agreed that a circular acknowledging the decision should also be issued, which will go to all HRs in all departments in the province,” said Mabelebele.

“We said if they have terminated anyone who is a community service nurse, they must call them back to work.”

The nurses told Daily Maverick on Wednesday that they had been assured that a budget for the community service nurses was available.

We said in five days the circular must have reached all the HRs and all the community service nurses must be called back to work.

Mabelebele said the nurses might not be deployed at their posts of preference and should not expect to return to the same institutions. He said they would be posted where there are glaring shortages.

“We said in five days the circular must have reached all the HRs and all the community service nurses must be called back to work,” said Mabelebele.

He said it was encouraging that the process of calling the nurses back was already under way in all the facilities in Sterkfontein and Sedibeng.

He also expressed concern that in other areas people outside the community service programme had been given contracts.

“They took people from outside and made them sign contracts,” said Mabelebele.

During community service, nurses perform the same duties that professional nurses would.

“They are professional nurses, they are qualified,” said Mabelebele. “They must scrap community service.”

However, one of the affected nurses told Daily Maverick the issue of scrapping community service was debatable.

“As nurses we are trained by different institutions and our level of exposure varies. Community service is useful in ensuring that we are all on par before we take up available posts,” he said.

“It is rather frustrating that every year we have to put up a fight for us to be deployed,” said another nurse.

One of the reasons that community service was implemented was to prevent nurses from leaving South Africa immediately after graduating.

“Their community service strategy is not working, because even if nurses remain in the country, they are not employed anyway,” Mabelebele said.

Nurses said they were feeling the pinch of the austerity measures implemented by Finance Minister Tito Mboweni, which gave birth to budget cuts, which in turn led to job cuts.

One of their demands was for release from their contracts or for a bursary system to be put in place.

All along they were aware this moment would come when they would have to absorb 983 nurses. What an inconvenient time to be playing games with us.

The nurses demanded three months’ notice of termination of contract so that they can look for employment elsewhere and outside of government, a payout of their pension funds, and continuation of their posts for at least three months.

They also want employment prioritisation. Mabelebele said this means that nobody can be hired ahead of community service nurses.

The nurses also want fast-tracking of the community service completion certificates to make them eligible for application for employment in other institutions.

The Gauteng Department of Health had not responded to questions nor confirmed its commitment to absorb all 983 nurses by late on Wednesday.

“All along they were aware this moment would come when they would have to absorb 983 nurses. What an inconvenient time to be playing games with us,” a nurse said.

“There should be a law clearly stipulating that after the year of comserve the institution should (if they have any available posts) absorb the community service nurses. Institutions who do not have posts should indicate beforehand in November and December,” said one nurse.

He said that in early 2020 they sat down with former Gauteng MEC for Health Bandile Masuku who assured them that they would be automatically absorbed once they were finished with their studies. Masuku was axed by Gauteng Premier David Makhura following accusations that he failed to exercise proper oversight over PPE tenders.

“Last week we received calls from our managers saying we should not report for duty after 31 January because our contracts had been terminated,” the nurse said.

“We never sat with them, there was no memo out on this, no communication, nothing. We dwelled on the hope that Masuku’s promise would still be valid. It was quite a shock to receive the call preventing me from reporting for duty the next day,” said the nurse.

“We have never on any occasion met with the Department of Health regarding the issue of absorption of community service nurses. The one time one such meeting took place was with former health MEC Bandile Masuku at the Birchwood Hotel in early 2020 where he said we must be absorbed,” another nurse said.

She added, “Then on 30 December we were addressed by our HR manager who said our contracts had come to an end and we should therefore not report for duty.” DM