Cape Town’s high-rise future: Age of prosperity, or a blot on the skyline? 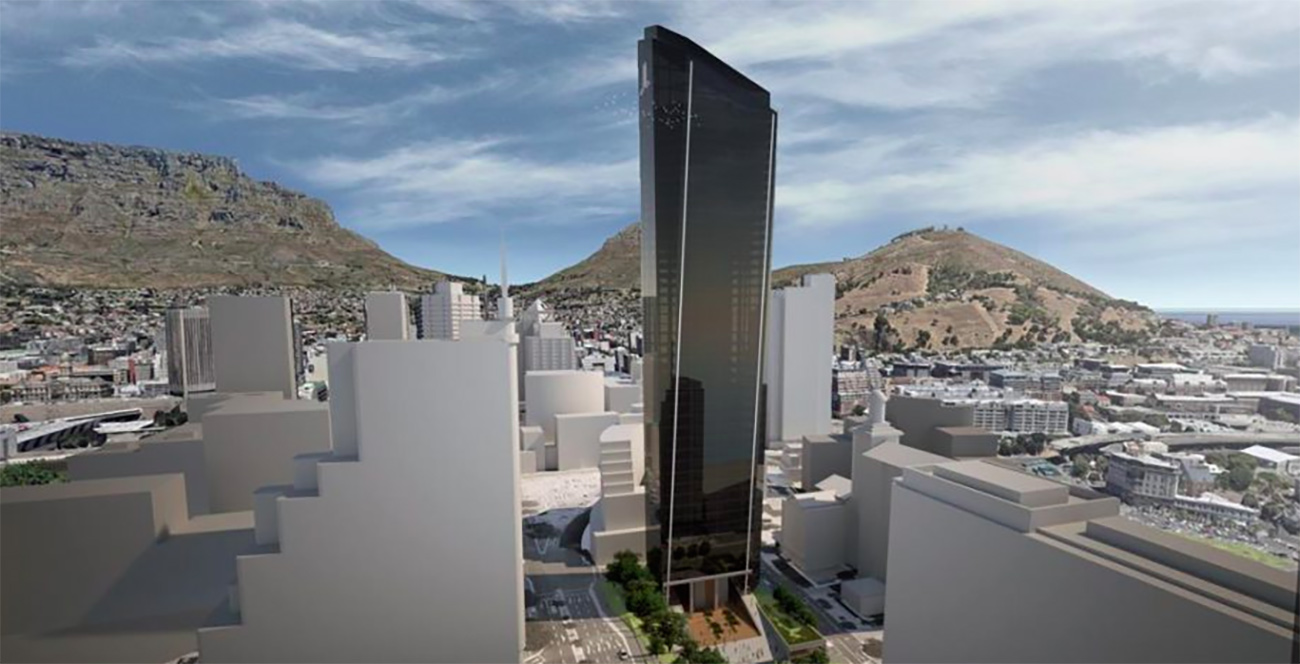 An illustration of Cullinan Square, which will stand 192m tall on the Foreshore area of the Cape Town CBD. (Screenshot: RAS Architects)

There are more than 30 tall building developments in the pipeline for Cape Town’s CBD, one being a skyscraper that will become the city’s tallest building at about 192m – 47 storeys. But not all residents are sold on the future look of the CBD.

The tallest skyscraper in Cape Town’s CBD is set to stand 192m tall, opposite the Cape Town International Convention Centre (CTICC). The building will be 53m higher than the 30-storey Portside Tower that currently claims the title of the tallest building in the city, and 50m higher than another building in the works for the CBD, the Zero-2-One property development.

The 192m-high Cullinan Square building will be on the Foreshore, one of the most booming property development areas in the CBD, according to Deon van Zyl, CEO of the Western Cape Property Development Forum. This new development will include a hotel, restaurant, spa, an observation deck and a retail component, all promoting public activity and providing an economic boost for the CBD.

The building is set to mark a shift from traditional development patterns in the city to more modern patterns, according to the website of RAS Architects, which designed the building.

The development is currently in assessment, says the Mayoral Committee Member for Spatial Planning and Environment Alderman Marian Nieuwoudt. The application will be subject to a report to the city’s Municipal Planning Tribunal, which has yet to be finalised.

Another skyscraper, 145m tall, recently approved by the city’s planning tribunal, has “raised eyebrows” in Cape Town’s property circles, according to the Sunday Times.

Titled the Erf 204 Roggebaai Project, it is also opposite the CTICC but was questioned for unusual dimensions, considering Cape Town’s summer southeaster wind. This project’s closing date for appeal was 4 January.

The Foreshore is home to many high – more than nine storeys – and tall buildings containing offices, businesses, hotels, conference facilities like the CTICC, and residential apartments, says Dave Daniels, chairperson of the Municipal Planning Tribunal.

Daniels says: “A development of this scale and nature is considered to have a significant positive economic impact on the CBD and Cape Town’s economy by way of construction costs and increased new business within the area.”

The story of the city is change

Cullinan Square is only one development among more than 31 skyscrapers in the works for the CBD, according to the Central City Improvement District’s state of the city report for 2019, published in October.

By bringing more people to the city, the building further boosts the residential population in the CBD and Foreshore, Daniels says. He adds that increasing the number of residential and business users would have a positive impact on the socioeconomic activity on the Foreshore and in the CBD.

According to Van Zyl, “It is the natural progression of the City Bowl… or a Manhattan.”

But not all residents residing around the CBD want to live in Manhattan.

According to resident Yazid Davids, who has been living in BoKaap for 40 years, the growing skyline of the CBD especially affects residents living in lower BoKaap.

“Residents once had a beautiful view of the mountain, but it’s now clouded in concrete and the increase of skyscrapers is a major inconvenience in terms of traffic and overall congestion.

“It has most definitely been a concern within the community in terms of pushing up rates and increasing the population of a city that can barely handle its current capacity,” says Davids.

For Elizabeth Coetzee, who has been living in De Waterkant for 10 years, the mushrooming of high-rise buildings in the CBD has been problematic. Coetzee was speaking at a by-election about some of the problems she had encountered living in the CBD.

“[The developments] are just going on and even on the mountains at certain points. When you come to the end of the waterfront, coming into the city… I have measured that if there are five more buildings at the height of the Portside Tower building, then you won’t see the mountain from that point. It is absolutely crazy,” says Coetzee.

“I am no city planner… but it is as if the city developers have a free rein to obliterate the whole feeling of the mountain… I am not talking for only me who wants a nice view; I am talking about ordinary people driving in buses and cars.

“Cape Town needs to have a more imaginative idea of how to design density in a city.”

Niewoudt says there is no legislation against a building of a certain height, but building heights are prescribed in terms of zoning, which provides rules and regulations for use and development of a property.

Skyscrapers in the City Bowl fall under a “mix-used” zoning area and comply with regulations set out in the Tall Buildings Policy of 2013.

The place of least resistance

Tall buildings will continue to rise in the CBD as long as there is no creation for development opportunity in the rest of the city, Van Zyl says.

But local government does not have those “proactive” structures in place, says Van Zyl. There is more tolerance for tall building property developments in the CBD, and so the market will continue to gravitate towards the CBD. Unless the government actively promotes growth spurts in other parts of the city, the pressure for growth spurts will continue in the CBD, Van Zyl says.

The problem is that the city is developing and will continue to do so, particularly because of a growing population and economic opportunities, Van Zyl says. But, he says, local authorities have failed to show residents around the CBD their vision of the city – “if there was a vision for Cape Town”.

“Cape Town, an international investment destination, is losing out because we actually don’t have an opinion about our own future,” Van Zyl says. “Long Street has a very specific character, because of buildings that have framed that view. There are other views that can exist in the future.” DM

The architects of Cullinan Square were approached on several occasions for comment but failed to respond by the time of publication.