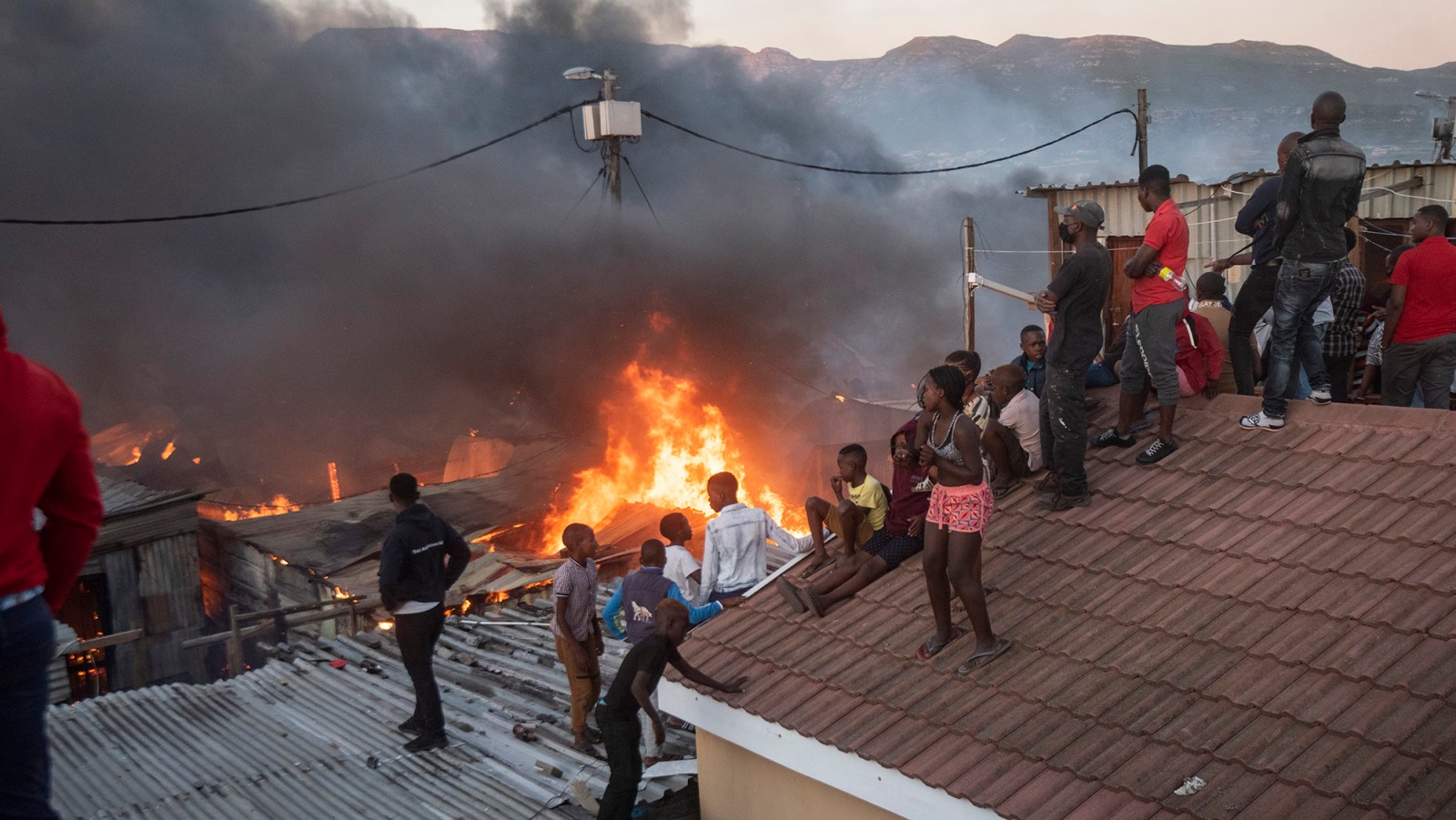 It is estimated that 500 homes were destroyed by fire fuelled by strong winds in Masiphumelele on 17 December 2020 in Cape Town. Helicopters and fire engines were deployed to help put out the raging fires. The cause of the fire is not yet known. (Photo: Gallo Images / Brenton Geach)

On Thursday, 17 December 2020, a devastating fire ravaged an informal settlement in Masiphumelele, destroying more than 1,000 homes and leaving more than 5,000 people displaced and destitute.

This is not the first, second, third or even 10th time that a fire of this kind has devastated families in Masiphumelele and left them with nothing. A google search for Masiphumelele fire will provide endless results of news reports of such fires for every year to as far back as 2010, and there has surely been others before then. You were also Mayor for sometime between 2009 and 2011, and we are still here. In some of these years, there were two or more fires. Many lives have been lost as a result of these fires. This is just Masiphumelele we’re talking about.

Cape Town has over 200 informal settlements like Masiphumelele, with no adequate or non-existent basic services. These fires happen. Cape Town politicians, yourself and officials will visit these communities, make calls for donations, tell stories about the causes of the fire, apportion blame and tell excuses about why the particular informal settlement has not received services, been upgraded or received houses.

Mr Mayor, in the same week the recent Masiphumelele fire happened there were two other informal settlement fires in Site C Khayelitsha that destroyed over 40 homes, leaving over 200 people displaced and one person dead. These are only fires we are aware of during this week of December 2020. There are probably others.

Earlier in the same week, a statement was issued by the City’s Mayoral Committee (Mayco) Member for Human Settlements, Malusi Booi. In the statement, the Mayco member said that the City of Cape Town will no longer be providing emergency building kits to those affected by fire and flood disasters and blamed this on national government budget cuts.

After the fire in Masiphumelele you visited the community. Other Cape Town politicians such as Malusi Booi, Felicity Purchase and City officials also visited. You all joined the call for donations from the public. Mr Mayor you later announced that the fire was probably caused by “an attempted land invasion”. Then there was a visit from the National Human Settlements Department Minister, Lindiwe Sisulu, accompanied by Malusi Booi. Promises were made for “long-lasting solutions”. All scenes we’ve seen before.

So why does the City of Cape Town respond the same way, year in year out, as if it’s a humanitarian organisation, when fires and other disasters occur in informal settlements? Do politicians and officials in the City expect a different result each year without actually doing anything different? Isn’t that how insanity is defined?

Mr Mayor, a week has now gone by since the recent Masiphumelele fire. Over 5,000 people remain homeless, destitute and are likely to remain so for the next while. This is all happening at a time when the country is experiencing a second Covid-19 wave and a new variant of the virus that spreads faster. “Stay home”, remains the message.

“Housing has become the front line defence against the coronavirus. Home has rarely been more of a life or death situation.” This was the message from Leilani Farha, former United Nations Special Rapporteur, on the right to adequate housing, in March this year when she urged governments to take urgent measures to protect those in informal settlements against Covid-19.

In Cape Town, for many, living in an informal settlement is and has been a matter of life and death for a long time. This is due to no natural disasters but your government’s anti-Black and anti-poor policies and failures at service provision. Whether it’s the lack of access to safe and dignified sanitation, lack of adequate lighting, lack of adequate access to water, or whether it’s fires and floods, lives have been lost and lives remain at risk in informal settlements.

Reports such as that of Ndifuna Ukwazi titled City Leases: Cape Town’s Failure to Redistribute Land show us there is land available in Cape Town. The report shows, for example, that public land in Rondebosch equivalent to 45 rugby fields has been leased for just less than R1,000 a year for the rich and white to enjoy golf, but can’t be prioritised for housing thousands of people in need.

Budget analysis released recently by the International Budget Partnership South Africa, through its collaborative initiative Asivikelane, shows that the City of Cape Town has an accumulated surplus of over R5-billion. Money that could be used to provide much needed services in many of the informal settlements in Cape Town. There have also been numerous reports of the City of Cape Town having had to return some of the money received through national government grants due to underspending. This is a City with a housing crisis not spending money meant for housing.

So, the City has available well located land and money that could be used for housing and that could be used when reblocking or de-densifying informal settlements in order to provide basic services, access roads and limit the amount of fires or damage caused by fires, but it chooses not to. But you all continue to fail in fulfilling your constitutional obligations. You and the City have failed the people of Masiphumelele, people in Site C, and many others in informal settlements across Cape Town.

The fact of the matter is that these failures are due to a lack of political will. Lack of political will which we believe is shaped by your government’s anti-Black policies and attitudes, also influenced by wishful thinking in some politicians in Cape Town that Black people in informal settlements will live in squalor, be miserable and eventually leave this City, being “refugees” and all.

This attitude from the City of Cape Town must change. Do better, Mr Mayor.

Khayelitsha CAN is one of the Community Action Networks in Cape Town made up of a group of volunteers based in Khayelitsha responding to the needs of disadvantaged people and communities, especially informal settlements, during the time of Covid-19.