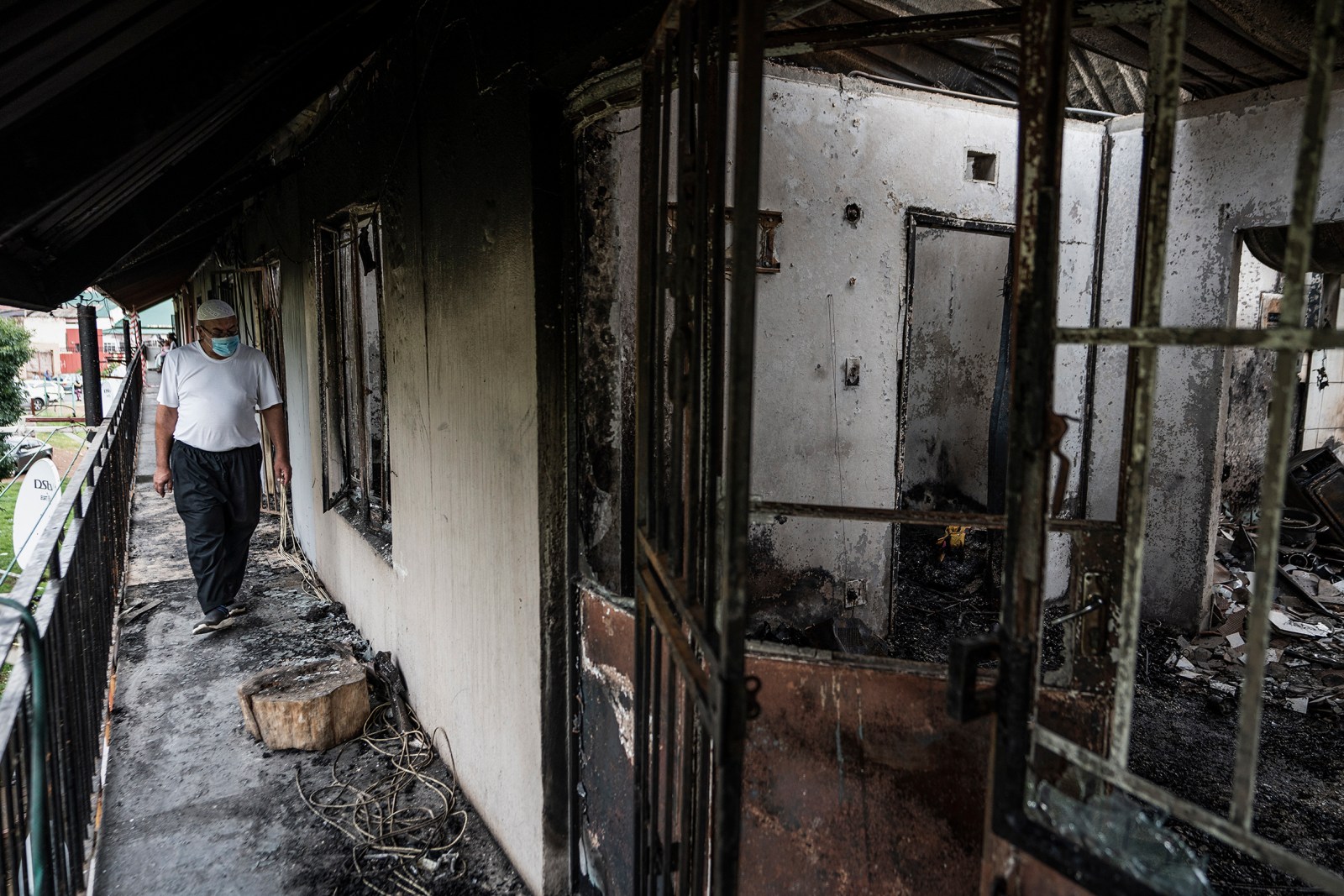 A man walks past the damaged flats. Residents were unable to save any of their belongings in the blaze. (Photo: Shiraaz Mohamed)

A fire has ripped through a block of flats in Newclare, Johannesburg, leaving several families homeless before Christmas.

“I heard a bang. There were four gas tanks in that flat. I said to my partner, babe, hulle breek die venster, hulle break die kar se venster. At first I thought someone was breaking into the cars, but then I heard a second bang. We went out to see. I saw a lady run out of her flat with her children screaming.” The chilling words from an unidentified woman who described how she was woken up by a fire that ripped through a block of flats in the early hours of Wednesday, 23 December 2020, in Newclare, Johannesburg.

With just a few days before Christmas, several families from Dulcie Flats were left homeless by the fire. While there were no injuries, they lost all their belongings. Residents say a fight between a couple led to the fire.

A distraught Karen Andrews had to be comforted by neighbours before speaking to Daily Maverick: “They had an argument that started at 7pm. It went on the whole night. It went on physically and verbally. He threatened to shoot anyone who went to his door that tried to intervene. We were scared and took his threat seriously. At some point, he left and we were able to doze off.”

Andrews says: “We were woken up by a neighbour who was screaming that a flat was on fire. It was their flat. We had to break down their door to access the flat. Where are they now? We sitting in this mess. I was telling a neighbour two days ago, I did not know what we were going to be eating on Christmas day. Now I don’t know where am I going to be staying. It’s a bonus I have on all my problems.”

“This was all caused because a boyfriend and girlfriend were fighting. What I heard was a sound. ‘BOOOOOF’ the gas canisters, four of them. That made everything worse. I lost everything in the house, the room dividers, new sofas, my DStv, fridge, everything. We always hear about these things, but when it happens to you, then only will you feel the pain. I have to start afresh. I am a pensioner. That is a problem.”

William Rayners recounted: “I was sleeping. What woke me up was one of the explosions. One of the kids was screaming: it’s burning, it’s burning. I thought my flat was on fire. I went to check. The shouting and screaming from outside was what diverted my attention. We had to run around trying to get water to extinguish the fire. It was a failed attempt, but we managed to get everyone out. We had to break down doors and windows, especially where there were kids. We gathered them to safety, away from the smoke. That was a priority. We managed to get everyone to safety, but could not save anyone’s stuff. The least we could do was to save lives, which was the most important thing.”

Residents also blame the fire department for not being able to contain the blaze by not having any water in their fire engines. A woman who did not want to be identified said:

“They came without water. The first flat was burning. The second truck came. It also did not have water. We told them about a borehole at a nearby mosque. Why do they come without water when they are called to a fire?”

Spokesperson for the City of Joburg Emergency Management Services Robert Mauludzi responded that the fire department “had no water because there is no fire hydrant there, and they had to go and refill at a nearby hydrant”.

In a display of comradeship, neighbouring communities assisted the victims by providing them with groceries and other essentials.

The families were provided with temporary shelter in the form of tents by the City of Joburg. DM