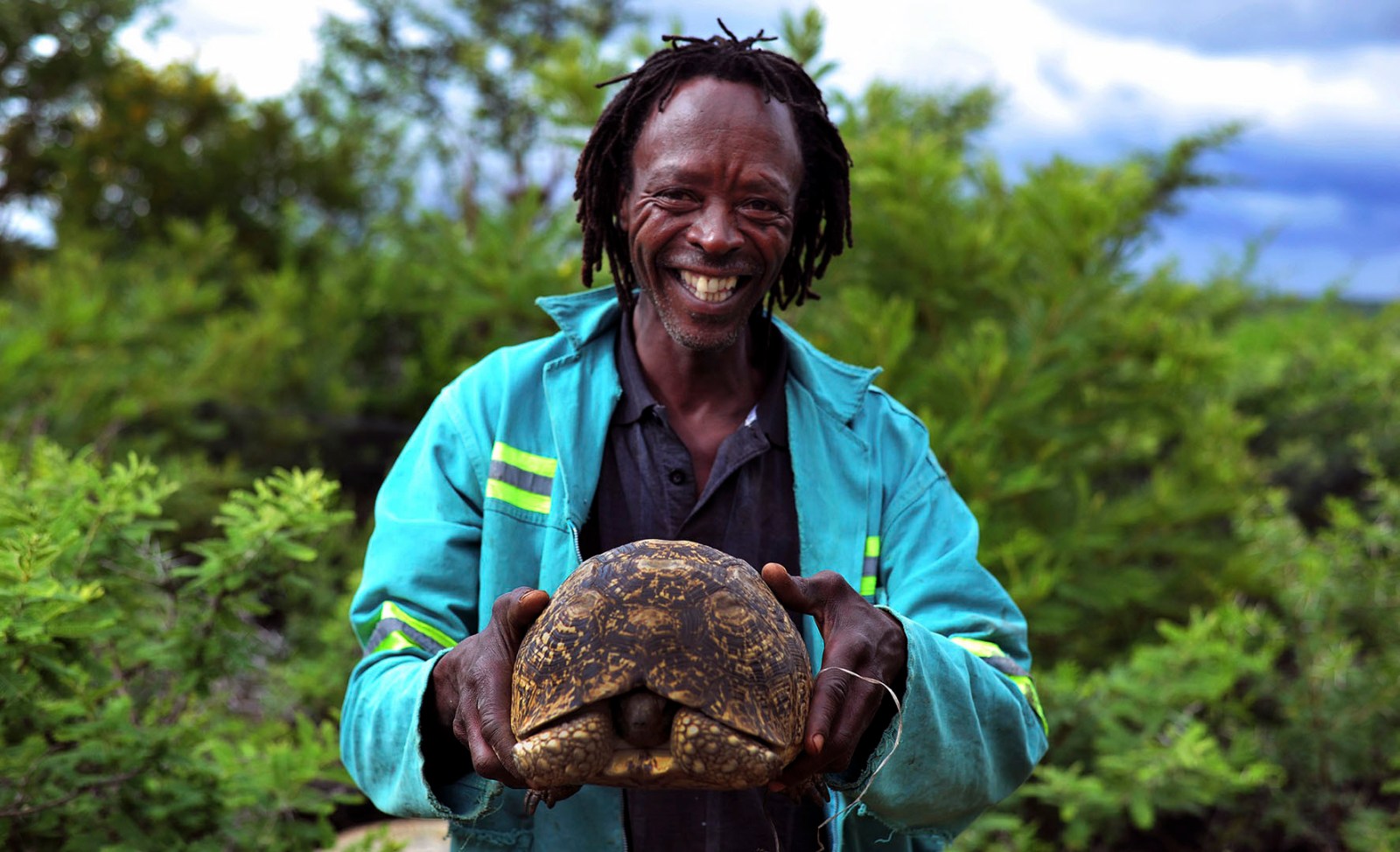 Ezekiel Maja with a leopard tortoise which is among the animals he preserves in his zoo in GaMaja village. (Photo: Lucas Ledwaba/Mukurukuru Media)

A childhood passion for animals and plants has evolved into a mission for Ezekiel Maja, who hopes to grow his village sanctuary into a place of learning.

Each time he earns some money from a piece job Ezekiel Maja saves some of it to buy animals for the mini zoo he runs in his home village in Limpopo.

The land around his RDP house in Ga-Maja village southeast of Polokwane is a sanctuary to a growing collection of animals. He keeps guinea fowl, grouse, tortoises, rabbits, pigs and ducks. He also plants maize, fruit trees and herbs.

Ga-Maja lies on the northern foothills of the Transvaal Drakensberg, an area characterised by hills covered in dense vegetation. Older villagers still practise subsistence farming on the fields allocated to each household by the traditional authority in decades past.

While some parts of the dense bushes that stretch far into the horizon still teem with small game and wild birds, not many young people venture out there, as Maja did as a boy. But now he is on a mission to ensure the indigenous knowledge of animal and plant species isn’t lost to the age of television and social media.

The nearest zoo, snake or bird park is in Polokwane, about 50km from the village. But in an area where public transport is unreliable and scarce, not many people fancy a leisure outing to a zoo that far away.

But why does a man who is struggling to make ends meet through piece jobs use his earnings for what others may consider an insignificant project?

“I have realised that for people to see animals they have to travel far to places like Joburg. I grew up loving animals. And now I realise both young and old people only know animals from television and magazines and don’t understand the importance of protecting them,” says Maja, who is known by the moniker Banana.

His love for animals goes back to a childhood spent in the bush on the outskirts of the village where small game and predators roamed the dense bushes in the hills at the foot of the Drakensberg and along the river Tlhakaro.

In his youth, Maja caused a stir when he brought home two jackal puppies to keep as pets one afternoon. With the help of his trusted dog, he had managed to retrieve the puppies from their den, seemingly while their elders were out on the piece job of hunting for food.

“My mother was not particularly happy. But I love animals, so I convinced her to allow me to keep them,” Maja says with a cracking laugh.

He kept the pups for three long months at home, feeding them raw pieces of meat pilfered from the family dinner and occasionally slaughtering a chicken for them.

But as they grew older and their late-night howling grew louder, his mother worried that their neighbours might accuse the family of using the jackals for occult purposes.

The family eventually forced him to release the pair. But for three nights, they came back to the family home, probably hoping for a snack from their adopted master. But when they realised they were no longer welcome, they stopped coming.

“They continued to live not far from the village. I was heartbroken but there was nothing I could do,” says Maja.

This perhaps defined his passion for conserving plants and animals on his homestead. Besides running the Ratang Hlago General Project (“love nature”) mini zoo, he is also a subsistence farmer and handyman who earns a living from piece jobs in and around the village.

To feed his animals, Maja hunts for excess fruit, veggies and crops around village homesteads and spaza shops, and spends a considerable amount of money on water for them because the village has an erratic supply.

He spent four years employed as a gardener at the Union Buildings in Pretoria in the late 1990s, learning the finer points of botany. He later worked in construction in Gauteng, but his heart was always in Ga-Maja, where he planned to establish his zoo.

“I want schoolchildren to come here and learn about the animals. I also hope that one day university students can come here to do practicals. I don’t have enough animals now, but I will get there,” says Maja, who already has a small following of youngsters fascinated by his work.

He wants to add baboons, monkeys, zebras, ostrich and other small animals that won’t pose a danger to people.

His animals are kept in cages he built himself using material he collects from the bush and construction sites. He used his earnings for the mesh nets and other material.

So far, Maja’s biggest challenge has been the theft of rabbits. Some have been killed by snakes, which are in abundance near his homestead on the edge of the village overlooking the bush stretching into the distance.

He aims to raise enough cash to erect a strong fence around the property and around the 10 hectares allocated by the local traditional authority to grow the project.

He also wants to add a nursery, a lodge and a centre where young and old can learn not only about animals but also about issues of culture and plants and nature in general.

“I have no formal training when it comes to working with animals. I just learn by watching their behaviour. I’m thinking that by doing this project these youngsters who roam the streets and hang out at shops might end up working with me on this project so that it grows and creates jobs,” he says. DM/MC