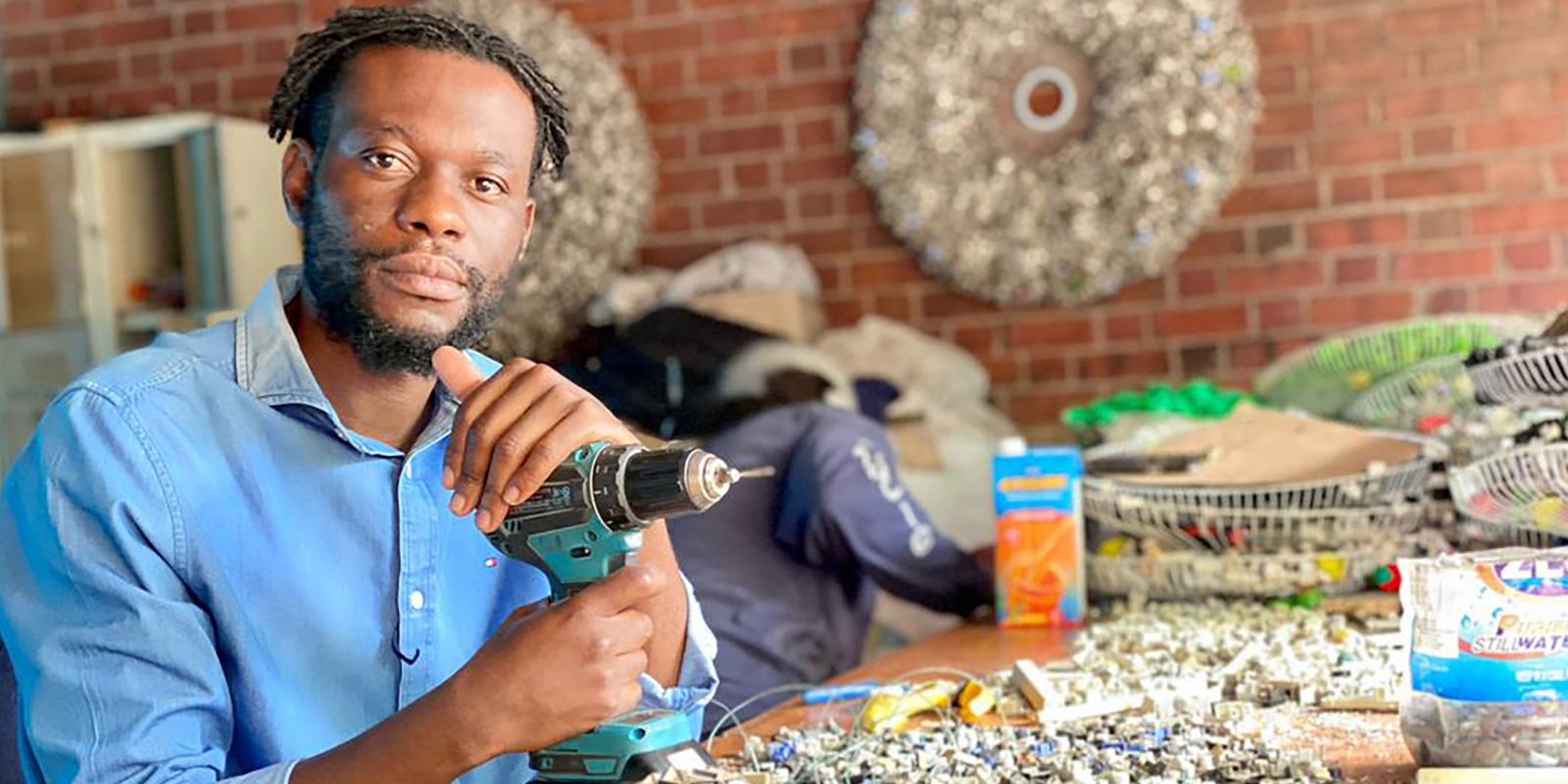 Moffat Takadiwa working at his studios

By making art from recyclable materials – other people’s rubbish – Moffat Takadiwa is commenting on environmentalism and inequality. He is also sending the garbage back to the West through his practice: ‘As they continue dumping in Africa, I return it,’ he says.

From one of Zimbabwe’s oldest, most overpopulated slums, Mbare township in Harare, artist Moffat Takadiwa tells his story using discarded materials from garbage dumps to weave expressions that speak about environmentalism and inequality.

Surrounded by countless garbage heaps in open spaces around the city and in townships such as Mbare and other high-density suburbs, Takadiwa draws inspiration and creates intriguing art pieces that have gained him international status.

His choice of materials departs from the centuries-old traditional Zimbabwean stone art, and yet he maintains its old weaving style.

Takadiwa was born in 1983 in the farming area of Tengwe, to a supermarket employee working in Karoi, the nearest town.

His work has managed to inspire and captivate the attention of other artists such as American billionaire rapper Jay Z, who bought one of his contemporary pieces, The Tengwe Farms, from an exhibition at Nicodim Gallery in the United States.

Speaking to Daily Maverick Takadiwa explains: “The Tengwe piece mimics a topographical map of where I grew up, giving an aerial view of the tobacco commercial farming activities which are affecting the environment.

“It continues to speak about the land question in Zimbabwe and Africa, which has not been addressed properly.

“By using everyday recognisable materials, I infused the African way of weaving to challenge Western aesthetics and comprehension of art. The weaving and fabrication of these materials is also informed by my Kore Kore culture.

“I’m also borrowing the basketry weaving of the people of Hurungwe, and using it as a pattern in my work. It’s loaded beyond a pattern, as it was used to carry a lot of information. Some of the patterns were used in mathematics, and recording of one’s wealth, singing and dancing. This is a way I elevate the discarded materials into something of value and return the materials to the West, although by means of art.

“As they continue dumping in Africa, I return it,” he says.

During his college days at Harare Polytechnic in 2007, Takadiwa defined himself and the type of art that he would identify with in future.

“Many young artists during my college days responded to market pressures which defined the type of Zimbabwean art, but I, being rebellious, wanted my art to be different,” Takadiwa says.

“Because I had challenges in accessing materials because of a lack of finances, I went against all odds and it was then that I made a decision to create various types of art with recyclable items such as plastic containers, lids, paper, computer components and many other garbage items.”

He believes that many artists were “fighting for a small cake in the industry” when it came to the type of art they created, and he stopped looking from within but through his “artistic eye at other available options”.

“At first it was not a choice for me but that there were no traditional art materials to use and I had to go to the dump to look for anything I could use to produce work.

“I talk a lot about environmental issues and colonial and post-colonial issues, which are still attached to our daily lives and in what we still use,” he says.

Some of Takadiwa’s pieces take the form of carpets, sometimes intricately woven together from computer keyboards keys, aerosol cans and spray bottles, toothbrushes and toothpaste tubes – all shaped into captivating patterns.

Takadiwa has participated in several significant exhibitions around the world, including in the United Kingdom, South Africa, the USA, Netherlands, the UAE, Italy and France.

Using his influence, Takadiwa converted a redundant community beerhall owned by the local authority into an arts centre where many young artists from the township come to learn and create their own wares.

Mbare Arts Space is Takadiwa’s home, fostering more than 100 youngsters, children and upcoming artists in a number of disciplines.

As if to remind visitors who come to the Mbare Arts Space that a clean environment is the direction the world ought to take, the footpath from the entrance into the gallery is covered with thousands of used toothbrushes of different sizes and colours.

An unmistakable rattling sound provokes the visitor to take notice, casting their eyes down as they walk before reaching the studios where artists work individually and in teams to create pieces.

He believes that his biggest achievement is “being accessed by my own people” and he is “happy to part with my skills and nurture the younger generation of artists”.

In 2010, Takadiwa co-founded the First Floor Gallery Harare, which helped a lot of artists, before he joined several international galleries. He is now with Nicodim Gallery in Los Angeles.

Zimbabwe’s current economic crisis has not spared artists as they struggle to make ends meet and source materials for their craft.

“Our country is at the centre of the current worldwide contemporary art movement, but we lack local infrastructure to exhibit our art pieces and the culture of visiting art galleries is not common among citizens,” Takadiwa explains.

First Floor Gallery Harare supports emerging artists by providing them with material support, a space to present their work and gives a focused effort to develop local and international audiences for local art.

Valerie Kabov, the First Floor Gallery Harare director, tells Daily Maverick: “Artists in Zimbabwe face challenges when it comes to ensuring sustainability of the art sector because the collector pool in the country is very small and a lot of people don’t understand the benefits of supporting local artists or the kind of success that Zimbabwean artists are achieving internationally.”

Kabov also asserts that, “a lot of young artists believe in a white saviour’s situation that some rich foreign person will come and make things happen for me”.

Takadiwa’s personal journey, the Mbare Art Space and First Floor Gallery Harare offer not only an incubator and motivation for young Zimbabwean artists, but a platform to world stardom.

The Zimbabwean artist has been able to get more orders for his art pieces for the festive season and he was busy most of November with creating new pieces as well as shipping the consignment.

Takadiwa’s initiative to expand his Mbare Art Space is looking promising in the new year. Some of his shows were moved to 2021 as a result of Covid-19, and he looks forward to a positive new year. DM168

Following the publication of this article, Kabov contacted Daily Maverick to challenge Takadiwa, insisting that he was not a co-founder of the  First Floor Gallery Harare, but a represented artist from 2010. Takadiwa maintains that he was a co-founder with Kabov and Marcus Gora.