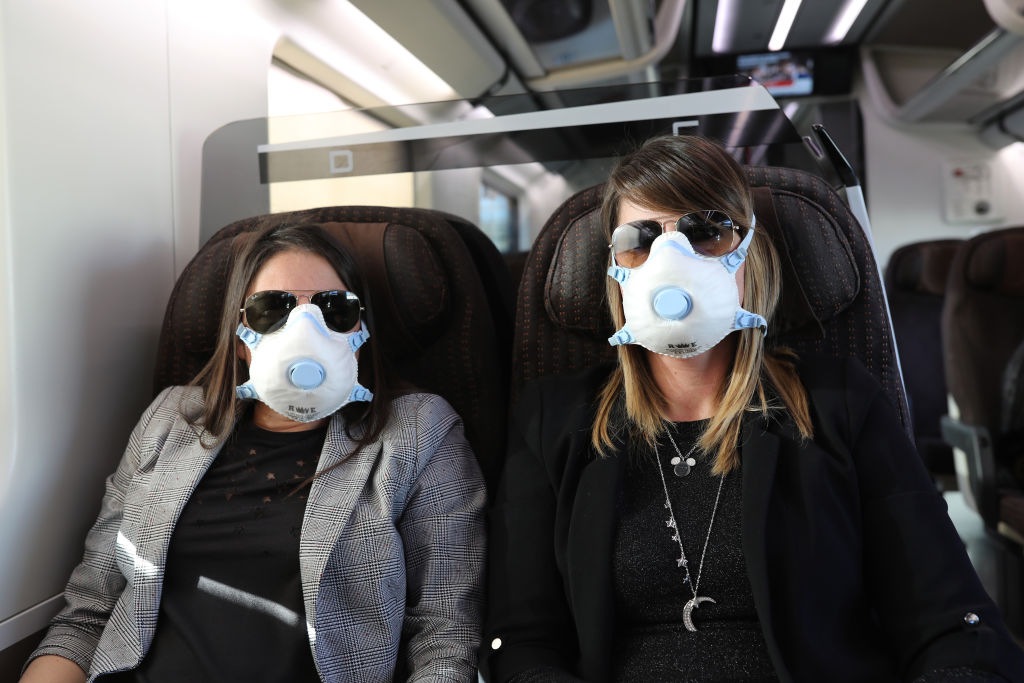 Passengers wear protective masks as they travel on a train from Rome to Milan on February 25, 2020 in Milan, Italy. Photo by Marco Di Lauro/Getty Images)

Germany could also impose restrictions on flights from the United Kingdom and South Africa - which has also detected a new coronavirus strain, a German Health Ministry official said.

LONDON, Dec 20 (Reuters) – Several European countries placed new restrictions on travel to and from the United Kingdom on Sunday due to concern over a new strain of the coronavirus that is spreading rapidly there.

Belgium said it would close its borders to trains and planes coming from the United Kingdom and the Netherlands also suspended flights. Italy said it was planning a similar ban.

Germany could also impose restrictions on flights from the United Kingdom and South Africa – which has also detected a new coronavirus strain, a German Health Ministry official said.

The UK government tightened its COVID-19 restrictions for London and nearby areas and disrupted the Christmas holiday plans of millions of people.

Belgian Prime Minister Alexander de Croo said the ban on incoming travel from Britain covers Eurostar services via the Channel Tunnel and will take effect for at least 24 hours from midnight on Sunday, broadcaster VRT said.

Belgium was also in touch with France over road transit passengers from Britain, VRT said.

Italian Foreign Minister Luigi di Maio, announcing plans to halt flights to and from Britain, said: “Our priority is to protect Italy and our compatriots.”

The Netherlands banned flights carrying passengers from the United Kingdom from Sunday and the restrictions will remain in place until Jan. 1, the Dutch government said. It is monitoring developments and considering additional measures regarding other modes of transport.

The government issued an advisory saying “do not travel” unless it is absolutely essential.

Germany wants to ban all flights from the United Kingdom from midnight until Jan. 6, Bild newspaper said, citing government sources.

German Chancellor Angela Merkel’s cabinet will vote later on Sunday on a decree prepared by the health minister and she will hold a phone call with French President Emmanuel Macron to discuss a coordinated EU response to the new strain of the virus detected in Britain, it said.

Spain said that in response to the moves by some of its European Union partners, it had asked the European Commission and the European Council for a coordinated response from the bloc to the new situation.

Otherwise, it would act unilaterally to defend its interests and citizens, the Madrid government said.

Like other countries in Europe, Britain is battling to contain new waves of the virus. It reported 27,052 new COVID-19 cases on Saturday, taking the total over 2 million, and 534 more deaths, taking the overall official toll to more than 67,000.

In addition to the measures announced for England, the United Kingdom’s other nations, whose response to the pandemic differs from that of England at times, tightened restrictions. Scotland has imposed a ban on travel to the rest of the United Kingdom.

Futher afield in Israel, passengers who arrived from London on Sunday were taken in three buses with a police escort, from Tel Aviv’s Ben-Gurion airport to a hotel designated as a coronavirus quarantine facility as the government weighed whether to halt flights to and from Britain completely. DM