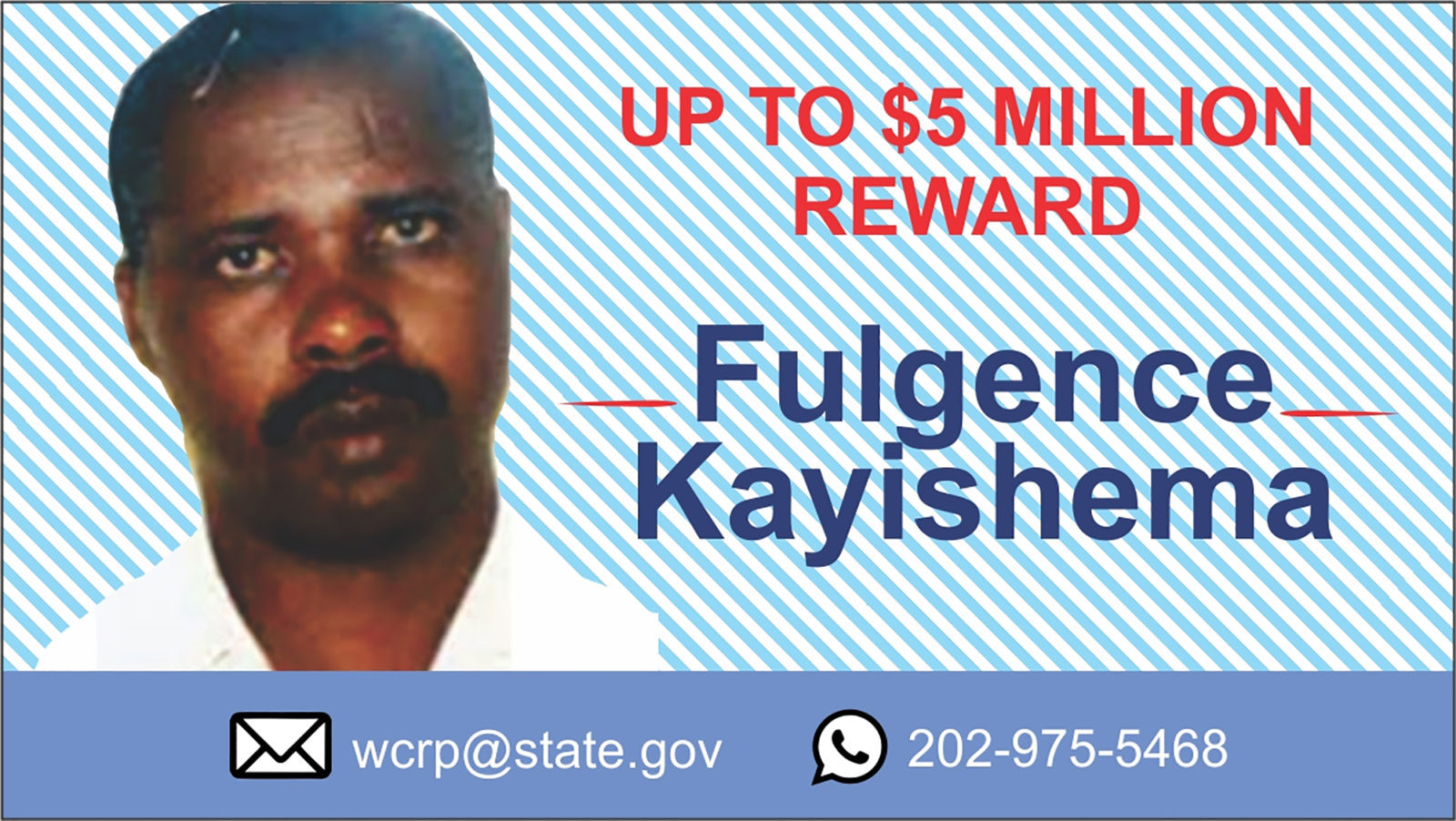 Fulgence Kayishema, who allegedly bulldozed a church filled with 2 000 Tutsis in Rwanda in 1994, killing hundreds, was living in Cape Town until a year ago

The South African government has received a blistering public rebuke from an international war crimes prosecutor for allowing one of the worst perpetrators of the Rwandan genocide to escape from South Africa in 2018 and for continuing to frustrate international efforts to track him down.

Serge Brammertz, Prosecutor of the International Residual Mechanism for Criminal Tribunals (IRMCT), told the UN Security Council in New York on Monday 14 December that South African authorities had refused even to place Fulgence Kayishema, a fugitive from the tribunal, under provisional arrest, when tribunal investigators traced him to Cape Town two years ago. This was despite an international United Nations warrant for his arrest which all UN members were obliged to implement. Nor had Pretoria even placed him under surveillance. As a result, he escaped from South Africa a year ago and has yet not been found.

The prosecutor’s unusually blunt report to the UN Security Council about South Africa’s unhelpful attitude has been described by one diplomatic source as “an astonishing indictment of a country which prides itself on upholding international justice”.

Brammertz said in his annual report to the Security Council that Kayishema “remains at large following South Africa’s failure to provide effective cooperation over the last two and a half years”. Pretoria’s failures included refusing to arrest Kayishema on grounds that he had been given refugee status. But later the Department of Home Affairs claimed that it had lost his refugee file and his fingerprints which the tribunal needed to confirm his identity.

“My Office alleges that Kayishema, the local police inspector, played an important role in the 16 April 1994 massacre at Nyange Church,” Brammertz said.

“In the days leading up to the massacre, 2,000 Tutsi civilians – women, men, children and elderly – sought refuge in the church.

“Initially, militias surrounded the church and launched an attack, including throwing hand grenades into the packed building. While many were wounded and killed, the refugees resisted, forcing the attackers to retreat.

“Determined to murder these innocent civilians, local leaders, including Kayishema, brought a bulldozer to the church grounds. In an act of unimaginable brutality and sacrilege, the bulldozer was used to demolish the church with the refugees still inside. More than 1,500 were crushed to death. Survivors who escaped were hunted down and killed. Kayishema fled from justice, and remained a fugitive for years. “

“But almost three years ago, my Office finally located him. Relying on records and sources, my Office concluded in early 2018 that Kayishema was living in Cape Town, South Africa. This was confirmed by South African authorities via INTERPOL in August 2018. We immediately submitted an urgent request for assistance to South Africa seeking his prompt arrest.

“So we were surprised to be informed that because Kayishema had been granted refugee status in South Africa, he could not be handed over to the Mechanism. This excuse was withdrawn months later, replaced with a new argument that South Africa lacked a legal basis to cooperate with the Mechanism.

“After sixteen months of intense negotiations, in December 2019, South Africa finally submitted the UN arrest warrant for execution, which a local magistrate approved. However, by then, Kayishema could no longer be found. It is important to note that my Office has reliable information that Kayishema was present in South Africa as late as October and November 2019, so merely weeks before South Africa reported in the Security Council that the arrest operation was unsuccessful.

”Little has improved since. A year ago, after the failed arrest, my Office submitted an extensive request for assistance detailing information we required to continue the pursuit of Kayishema. Yet our request still has not been satisfactorily answered.

“Two months ago in October, it was agreed that my Office would send a technical team to Pretoria to finally receive the requested material. The foreign affairs and justice ministries convened a number of joint meetings with responsible officials.

“But the Department of Home Affairs, which has responsibility for key information, did not attend as scheduled. My Office was then again requested to send last week another mission to specifically meet with the Department of Home Affairs and receive outstanding documents. To our great surprise, on the last day of the mission, Home Affairs representatives informed us that Kayishema’s refugee file and fingerprints do not exist. This is difficult to understand. “

Brammertz told the UN Security Council that he was reporting these facts “ to explain why, despite all my Office’s efforts, Kayishema remains at large.

“The situation raises many questions. How can it be that South Africa refused to arrest Kayishema two and a half years ago based on a refugee file that it is now claimed doesn’t exist? And why didn’t authorities take obvious measures after being informed that an internationally wanted fugitive indicted for genocide was present in their country?

“Despite a UN warrant calling for Kayishema’s immediate arrest, South African authorities did not provisionally detain him or put him under any surveillance to prevent his escape.”

Brammertz added that it was now most important was to move forward and finally arrest Kayishema. He appealed directly to South Africa’s representative in the Security Council – where South Africa has been serving as a temporary member for the last two years – to finally help his tribunal find Kayishema.

“Empower your operational services – particularly police and prosecutors – to work directly with us on a day-to-day basis. And truly give them your full political and diplomatic support, as well as the resources they require to help us. I am prepared to visit Pretoria in the new year to discuss our further cooperation and agree on a clear joint strategy and operational arrangements. This would also send the right message to other capitals”.

Darren Bergman, the spokesperson for international relations and cooperation of the Democratic Alliance said:

“Unfortunately the Government of South Africa believes in loyalty before the Constitution. When it comes to international relations and cooperation the name has been misleading for years as we have been anything but cooperative to the likes of world organizations that we pay hefty membership fees to sit on.

“We continue to embarrass ourselves and show that certain individuals’ lives matter more than mass lives in hypocritical ways that leave the international community continuously confused and frustrated at us. This has an impact on tourism, foreign investment and long term relationships.”

According to the website of Brammerz’s tribunal, of the 90 persons originally indicted by the International Criminal Tribunal  (ICTR) on Rwanda, six remain at large. Of these, Protais Mpiranya has been earmarked for trial by the Mechanism. The ICTR Prosecutor has requested referrals to Rwanda for trial in the cases of the five other fugitives: Kayishema, Charles Sikubwabo, Aloys Ndimbati, Ryandikayo (first name unknown) and Phénéas Munyarugarama.

At the start of 2020 there were two more fugitives at large. But in May 2020, DNA tests established that one of the most wanted killers, Augustin Bizimana, the defence minister at the time of the genocide and one of the kingpins of the extermination of Tutsis, had died in Pointe Noire, Republic of Congo, in 2000.

And Félicien Kabuga was arrested in France on 16 May 2020, “following an intensive analysis of telecommunications and other data… thanks to efficient cooperation from French authorities,” Brammertz told the UN Security Council last week. He added that the tribunal was progressing with preparations for Kabuga’s trial and he had already appeared in court at The Hague on 11 November this year.

The UN has offered up to US$5 million as a reward for information leading to the arrests of any of the remaining fugitives.

Brammertz was also critical of the Zimbabwean and Ugandan governments for their failures to cooperate fully with his tribunal in pursuing fugitives, though he did not identify which one or ones.

Brammertz said he intended to travel soon to Harare for further discussions with the government there:

“To move cooperation in the right direction, we would expect to see a more pro-active approach by the Zimbabwean Task Force.

“In this regard, effective investigations would need to begin with the acknowledgment that a fugitive is known to have sheltered in Zimbabwe and has deep, long-standing connections with Zimbabwean persons.

“Similarly, my team and I will need to return again to Kampala to engage in open and frank discussions about the urgent steps needed to remedy long-standing issues. Authorities have acknowledged that a fugitive obtained an official Ugandan passport, but our requests for investigation records and access to persons of interest have not been answered after more than a year.” DM