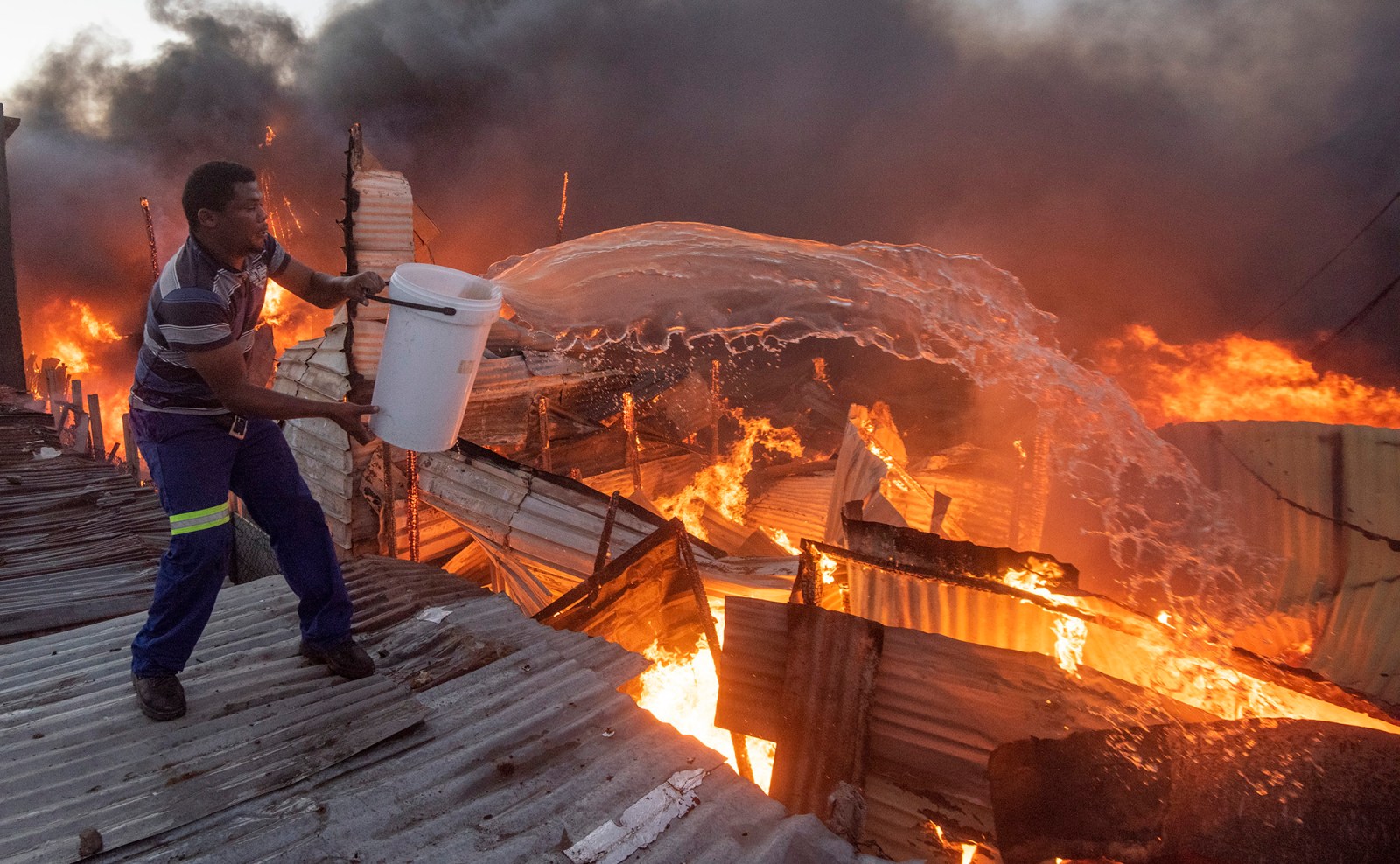 It is estimated that more than 1,000 homes were destroyed by fire and fuelled by strong winds in Masiphumelele on 17 December 2020 in Cape Town. Helicopters and fire engines were deployed to help quell the raging fires and the cause of the fire is not yet known. (Photo: Gallo Images / Brenton Geach)

The area, where more than 1,000 dwellings have been burnt to the ground, still looks like a warzone. But Masi residents are used to surviving. Some will stay with friends or at churches. The community hall will not be made available due to Covid-19.

Early morning on 19 December 2020, two days after: The smoke that was lingering from piles of scattered debris yesterday is gone. But this huge area, where more than 1,000 dwellings have been burnt to the ground, still looks like a warzone. Against strict advice by the City of Cape Town officials, some of the 4,000 affected residents have started to rebuild their shacks, others still guarding their space or the few belongings covered with ashes. Mayor Daniel Plato promised to bring in trucks today to clear the debris over the weekend – but what will happen to those who have rebuilt without permission?

One community leader says: “We cannot trust the City. We have to look after ourselves.” Another remembers: “The fire started at B-section of the informal settlement, then extended to C and D. Due to strong winds, it all went so fast. I saw how many men of D-section formed a line along a canal to make sure the fire didn’t go over to their shacks. Everyone was risking their lives to protect their families. Some were injured. It’s a miracle that no one died.”

More than 40 firefighters, supported by a helicopter, did their best to extinguish the blaze, which started just after 4pm on 17 December and went on until after midnight, before control was gained.

Masiphumelele is 30km south of Cape Town and about 40,000 mostly isiXhosa-speaking people from the Eastern Cape call it their home. It is so densely populated that most newcomers in search of work in the Western Cape have no other choice than to squeeze into the informal settlement, also known as the Wetlands, now occupied by more than 10,000 residents.

About a third of them have built their shacks on stilts in the low waters at the edge of the natural wetlands reserve. In some parts, there are no toilets or water taps at all, in others more than 20 families share just one toilet and clean water must be fetched from far away. Without a fire in summer or flooding in winter, it’s a permanent disaster area. Not only in times of Covid-19.

Not far away, a young mother with a baby on her back sits on a crate and indicates defensively: “This is where our shack was… my husband is at work. I must protect this space… other people are already pushing in, trying to steal the space from us.” Only now, I see two toddlers sitting in the dirt next to her. Also her children? “Yes,” she says. “We slept the first two nights in blankets on the ground next to Masemola Road. We will not go anywhere.”

One elderly man is digging in the rubbish with a stick. “All gone,” he says, “everything.” I ask him what he is searching for. “My passport,” he mumbles, not looking up. “I am from Zim… I am nothing without it.”

On my way to our children’s home, which is just behind the daycare clinic, I met the assistant of our only GP in Masi. She is perfectly on time as always for the past more than 15 years. This morning her eyes are filled with tears: “Nothing left, nothing… no merry Christmas for my family.” Where does she sleep? “A friend took us in. Fourteen people in one shack now. But the doctor will help me to buy some building material today.”

A moment later, a mother arrives totally stressed at our children’s home: Since the fire, her son, 11, is missing. “I gave him a bag with my ID and cellphone… and suddenly he was gone in all the chaos.” And her shack? “All gone,” she says. How can we help her? “I urgently need my daily medication… also all gone.” One of us accompanies her to a local pharmacy.

Whatever the government might do, or not: More than ever before neighbours of Masi are there to help. Since the first strict lockdown in March, a number of neighbours have founded Community Action Networks (CANs). It is working now, buzzing from activity on WhatsApp, as for example the Clovelly or Noordhoek CAN: To organise blankets and clothing, food and other support for the fire victims. People with resources care for people with less or no resources. Madiba’s and Tutu’s dream of a caring society brought to life.

Others also remind us that such fires are totally avoidable: “They happen every year. The same ritual is about to repeat itself. Charity and emergency relief will be supplied, and new shacks will be erected densely again and again without access to land, proper access to water, electricity and sanitation. But the old apartheid spacial arrangements could be changed; the City owns land adjacent to Masi.” Activists from Masi and surrounds have made such reasonable demands for land for years. But granted by the City are mostly new building sites for “rich developments”.  Masi remains “shut up” like a refugee camp. When will these deep injustices finally be addressed substantially? When will the extreme differences between poor and rich be overcome for the benefit of all South Africans?

Still, all agree out of simple humanity that emergency help is needed. Living Hope, a church-based organisation on Kommetjie Road opposite Masiphumelele, has built a professional trust to collect and distribute to those most in need. If you can, please bring items for fire victims to Living Hope, or donate via their website (“Masi fire”): www.livinghope.co.za.

Yes, later yesterday morning, Mayor Plato arrived with a number of officials at the Masi community hall. He explains that material to rebuild can only be given once an application for a local disaster funding has been approved – a new process. Not all listening do understand: “When do we get the material?” Ward Councillor Felicity Purchase says: “In three days it should be here… on Monday.” And until then? “Those who lost everything need to register with the City officials. Even those without shack numbers can do so by bringing a witness and filing an affidavit.” Long queues begin to form in front of the community hall.

Masi residents are used to surviving. Some will stay with friends or at churches. The community hall will not be made available due to Covid-19. Tough life. No merry Christmas.

A moment later, the mother comes back from the pharmacy. She has been helped with enough of her crucial medication for a few days. And she has found her son. We know a place for both for the next few nights.

Still, no merry Christmas. Maybe one day, when such fires are not regarded as unavoidable. DM/MC

Dr Lutz van Dijk is a Dutch-German writer, historian and human rights activist. He wasn’t allowed entry to South Africa until 1994. In 2001, he became a founding co-director of the Hokisa children’s home in Masiphumelele (www.hokisa.co.za). His book “A History of Africa” (preface by Archbishop Desmond Tutu) is told exclusively with African voices.