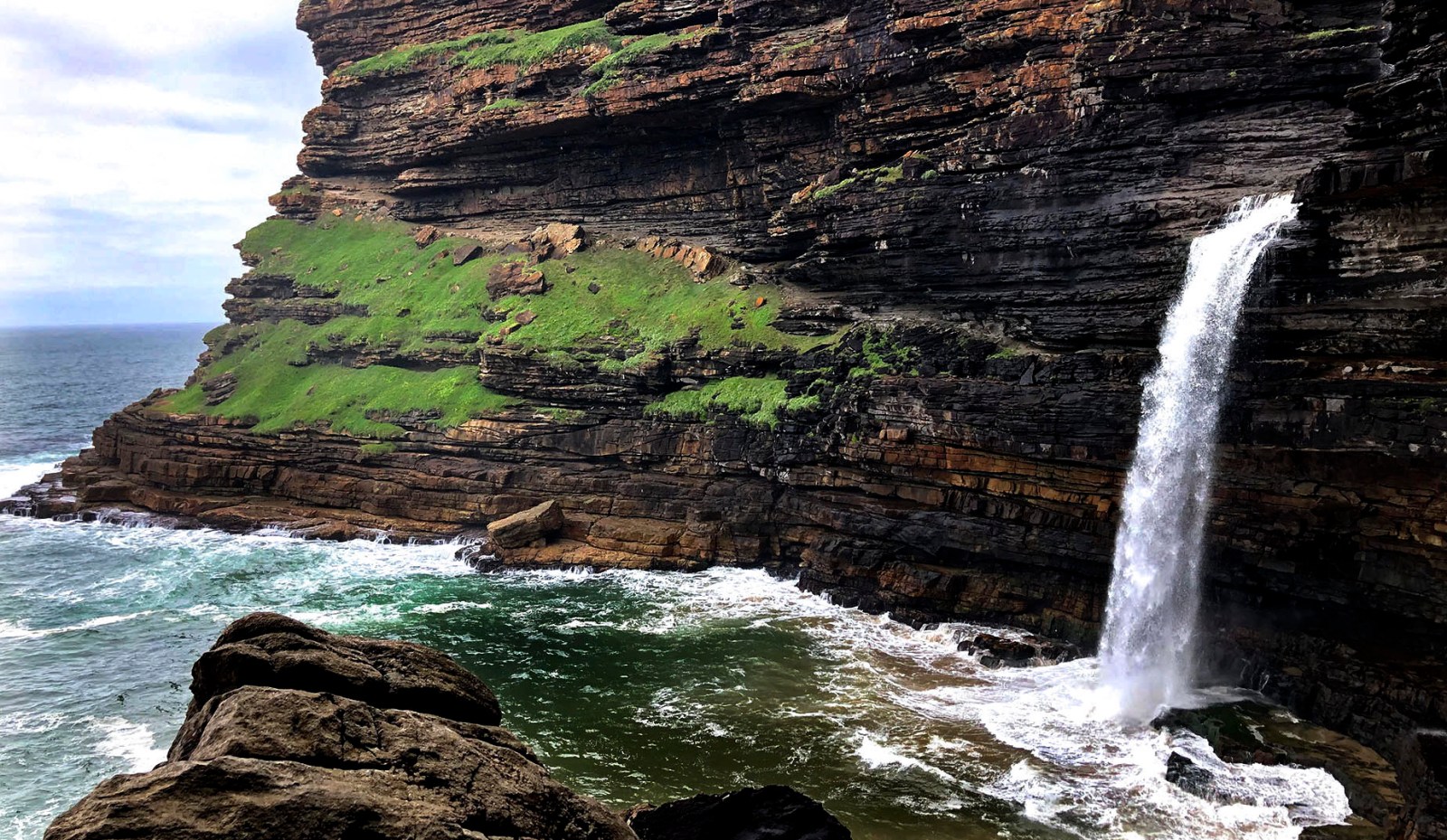 South Africa has a huge but untapped potential for environmentally friendly eco-tourism, which offers holidaymakers the chance to combine meaningful pleasure with building local economies and sustainable communities. Guided hiking trails along the Wild Coast of the Eastern Cape are a fine example. Mark Heywood takes you for a walk.

Walk about five kilometres south from the lighthouse at Msikaba, a village on the Pondoland coastline and you will come across a monument to the folly of men. On a rocky wave-beaten stretch of coast you will stumble across the entrance to a tunnel where 100 years ago a bunch of white men from Britain sought to dig a path out under the sea-bed to reach the wreck of the Grosvenor: rumour had it that the ship which was wrecked in 1782 on its return from India was carrying vast riches.

The tunnel, carved into the hard rock, ran for about ten metres before the men gave up. Who the men were and how they thought their harebrained plan would succeed, we will never know. They were not alone though.

According to a website on the Wild Coast, salvage operations on the Grosvenor “ranged from the ridiculous to the bizarre. Heavy-duty chains to scour the seabed; steam-driven cranes to scoop up the treasure; undersea tunnels; a 400m-long breakwater to enclose and then drain the entire bay; explosives and even spiritualists led by a ghost.

But despite these varied efforts, “the bay seems to be determined to hold on to its treasure … only a few cannon and some gold and silver coins have ever been recovered”.

Today historians have patched together evidence that suggests that the story of the Grosvenor’s treasures was fake news, so not surprisingly, the treasure hunters came away with sore but empty hands. Nonetheless the gold diggers of the Grosvenor serve as a metaphor for much of South Africa’s history, which has been about tunnelling to extract riches and the impact this has had on our land, indigenous people and economy.

Paradoxically, except for the migrant labourers it supplied to the gold mines, the former Transkei at least escaped with its natural geography unscathed.

This little vignette is but one of a collection I have just acquired as a result of a five-day walk on the Wild Coast. Accompanied by Mbaso Damse, an accomplished guide, a small group of us recently walked the 75km between Msikaba and Port St Johns. I feel compelled to tell you about it for a number of reasons.

A cauldron of boiling seas

First, the Wild Coast – which runs from Port Edward in the north to Gonubie in the south – must be one of the longest stretches of unspoilt coastline in the world. According to one website, “It takes its name from its wilderness character, but mostly from the pounding breakers and cauldron of its boiling seas when stormy conditions reign.”

I can attest to that. It is hard to put words to the total sensory experience the hike offers: sights, sounds, touch, smell, taste – and the feelings and thoughts they give rise to.

Deep indigenous forests cling to its constantly undulating hills humming with bird song and the symphony of cicadas. At some points the land slopes gently to the sea level, giving way to beaches and then the heave of waves.

A black sands beach at first makes you wonder about possible oil pollution, until it’s explained that this too is a rare natural phenomenon.

Sea birds in the sky, the occasional sight of dolphins in the sea, and lazy cows on the beaches.

At other points, high cliffs rise suddenly up to 100m above the sea. An inordinate amount of rivers reach the coast; the Mkhweni, Mzintlava, Manteku, Mzimvubu to name just a few that we crossed. Two of them fall directly into the sea from the tops of cliffs, something which, according to social worker John Clarke in his book The Promise of Justice occurs in only “nine other instances … in the entire 720,000km where land and sea abut on planet Earth.”

It was underneath one, the Mlambomkhulu Falls at the less imaginatively named Waterfall Bluff, that I wondered why we don’t record sound with the same alacrity that we snap pictures. Here the roil of waves, the echo of the cliffs, the crash of the constantly cascading water join forces in a wall of surround sound. A cave beside the waterfall offers a natural amphitheatre where you could sit for hours.

For some out-of-sorts reason it made me think of the part the sound of the sea plays in The Who’s classic rock opera Quadrophenia: young people’s alienation juxtaposed with nature’s constancy, “Nothing is planned, by the sea and the sand”.

Secondly, the hike is not just an opportunity to observe nature, but also to stay in and appreciate the communities who have lived there for centuries.

Pondo Tours, the small company created and owned by Bongani Mlotywa, calls it “home stays”. This means that at the end of each day’s walk you are billeted with a family who make a small income from providing you food, a roof and a mattress.

The fare is simple but sufficient: steam bread and pap, eggs from hens that freely range, spinach and other veggies from the gardens; and chicken are the staple.

But within these communities, you have a chance to connect with the timeless rhythm of rural life: the laughter of small children, innocent and oblivious to the “disadvantage” they have been born in; the ritual taking out and bringing in of the cattle; the arduous collection of water; the laughter rising from shebeens. Here is a chance to talk and hear other people’s perspectives and sometimes to laugh.

Sadly, most of these areas still don’t have piped water. Water comes from Jojo tanks or the rivers. If you are lucky enough to get a shower it will be an ingenious do-it-yourself contraption: a shack, a shower-head and a barrel of water balanced on the roof.

It was in this context that on the last night of the walk, now in Poenskop Village, one of our hosts, Ncumisa Somakepu, belly laughed as she told us of how some of her guests are stumped by trying to wash their bodies from bowls of water scooped from plastic basins. But her more serious point was that a small investment by the government in local entrepreneurial development would allow the poorer amongst them to build the showers more amenable to the historically advantaged.

I couldn’t but wonder why it is that, although many of our politicians hail from small villages, they have so quickly turned their back and power away from the communities that need them.

Which brings me to my third, last, point. In this age of global warming and environmental degradation, more people than ever seek alternatives, including holidays, that do not externalise our pleasure to someone else’s pain. A walk on the Wild Side fits that bill. It is a chance to invest in sustainable local economies.

What strikes me about these areas is that monetary poverty exists side by side with an abundance of natural riches. And yet none of us can escape money, or the fact that it is needed as a bridge to get these local economies working.

There is untapped economic potential on the Wild Coast, not for mining and ruination of the sort sought by Mineral Commodities Ltd, the titanium miners from Australia who would despoil the natural environment at Xolobeni; nor for the traditional type of tourism that has blighted many coastal resorts.

Instead, here is a possibility to excavate knowledge and culture, leaving minerals in the ground, to celebrate the traditions of resistance of the amaMpondo, to find ourselves and our values and to connect with people based on our common humanity.

Had it not been for the most recent set of Covid-19 preventative measures, that have now closed down all the Eastern Cape’s beaches and all beach-related leisure activities, I would even have urged you to make a plan and go.

Sadly, this year Covid-19 has put a stop to that. But 2020 will pass and when you get the chance … take a walk on the Wild Coast. DM/MC