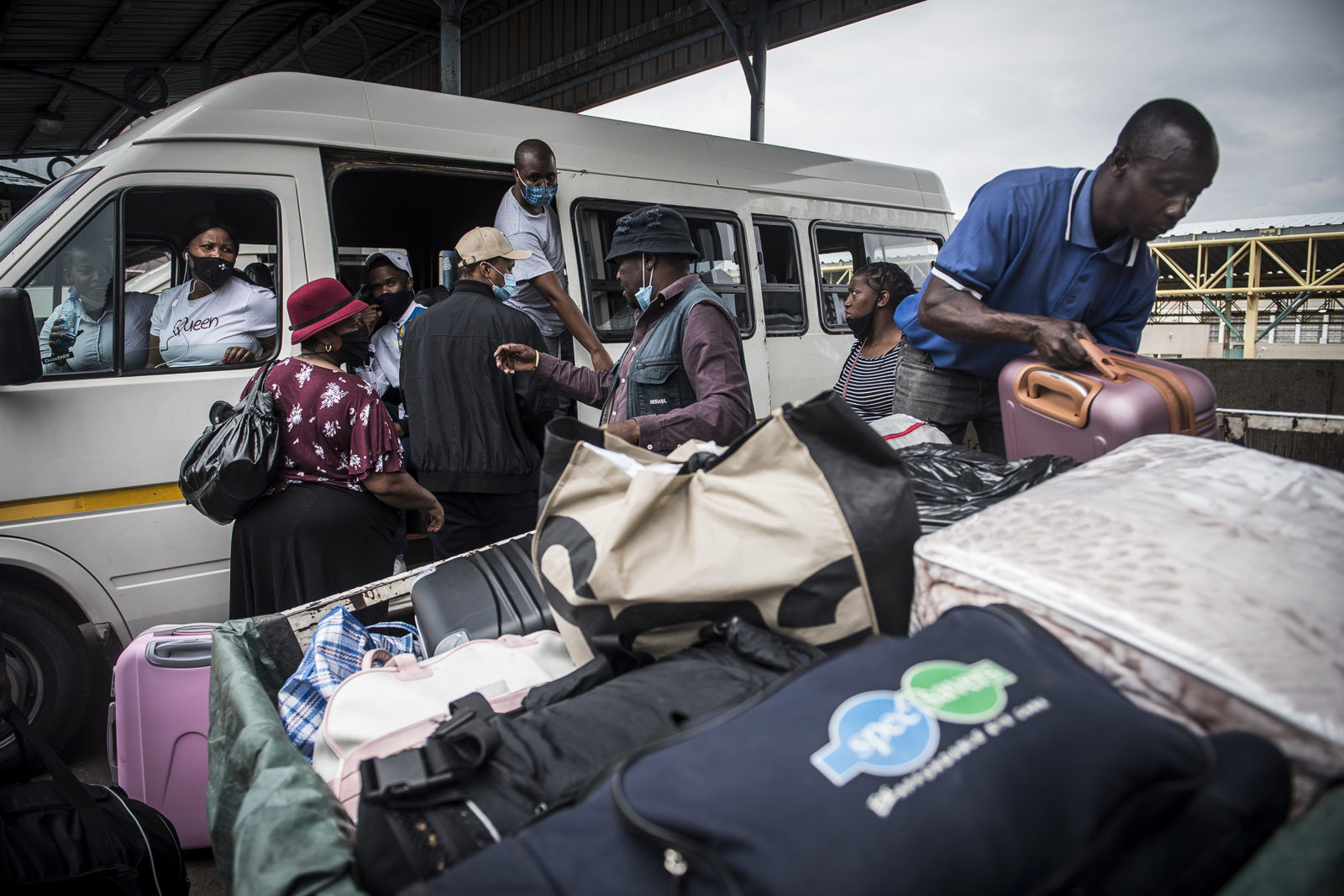 A man loads a trailer with luggage while passengers wait to board a taxi at Johannesburg’s Wanderers long distance taxi rank on 17 December 2020. (Photo: Shiraaz Mohamed)

A few days after President Cyril Ramaphosa implemented a more stringent Covid-19 protocol amid a second surge in the spread of the pandemic, taxi drivers and queue marshals say the task of enforcing protocol rests entirely on their shoulders as official support hardly ever existed.

Drivers and queue marshals at Johannesburg’s Wanderers long-distance taxi rank told Daily Maverick on Thursday that they are the sole enforcers of the government’s Covid-19 regulations for passengers.

While there is a testing centre at the taxi rank, queue marshals and taxi drivers said they have to contain unruly passengers who refuse to wear masks or wear them at half-mast – below the chin. The drivers and marshals said their most annoying customers were drunk passengers and those who simply defied the current laws.

Frank Fredericks, 40, said on a normal day he has to deal with about 3,000 passengers.

“You have to understand that of all these passengers, only about 30% of them fully comply with mask-wearing protocol. A majority of them have either forgotten their masks at home or wear them below the chin. I don’t know how many times I have had to tell passengers that this is new to all of us,” said Fredericks.

Robert Ndhlovu, 48, said there was nothing as difficult as dealing with passengers in Covid-19 times.

“What baffles me is that people complied as soon as international travel was allowed. Their actions were under close scrutiny back then, but in the last few weeks I have seen a complete defiance. I can tell you that 80% of people do not comply,” said Ndhlovu.

The marshals and drivers said the rank had only been sanitised once and that their vehicles were sanitised just twice after Transport Minister Fikile Mbalula announced protocol regarding taxi operations during lockdown.

And their frustration at having to buy their own sanitisers was clear.

“How many people will that bottle serve?” Fredericks said pointing to a 150ml bottle of sanitiser.

“Go around and see how many of us still buy it. I try all that I can, but this is beyond us. Sometimes I have to buy it from my own pocket because I know our customers are rare travellers and will be expecting decent treatment all the time,” Fredericks said.

“My sympathy extends as far as my safe driving goes. I don’t need to beg anyone to wear a mask. If a passenger forgot their mask and for some reason cannot buy one, I simply replace them,” Khehla Ndlangamandla, who transports people from the taxi rank to Swaziland, said.

A miner who was travelling to Mpumalanga said he was shocked that people still needed to be reminded how and why they should wear their masks. Mphikeleli Dlamini, 66, who wore his mask the way it should be worn, said it felt strange to go out. He said that he wished to return home for good. He has retired from his job at the Westonaria mine and was just waiting to go home.

“I have to be careful. I cannot take the coronavirus from Johannesburg and infect over a dozen family members. It’s like digging one’s own grave,” said Dlamini.

Said Ndhlovu, “It has altered my entire routine. Nowadays when I arrive home in Berea nightly, I have to wash my own masks and make sure that my family are all safe.”

Despite being filled to capacity, passengers inside many of the taxis either had their masks below the chin or took them off to chat to a neighbour. “It’s a South African way of having the mask on,” said Fredericks. “But I cannot take chances. As I usher them into the taxi, I demand properly placed masks or you get another taxi.”

“The government needs to take the transport industry very seriously,” said Gcinumuzi Nxiweni, a security guard at the entrance to Park Station.

“Contrary to people’s views about the government cowering to the taxi industry, what does the taxi industry have? The majority of people that pass here are passengers, but I have to remind each of them to put on their masks. Others pass carrying their masks in their hands,” he said.

“We all have to play our part,” said Nxiweni. “I sanitise everyone that passes here and demand masks on, but you have to understand that I have no control beyond this point.”

Over the past few months, Daily Maverick has observed the complacency that has crept in regarding the wearing of masks. The majority of drivers and passengers in Soweto have stopped wearing masks. Any suggestion about the wearing of masks is rebutted angrily.

The government made promises but never followed up or put people in place to enforce them. The past few weeks have seen a portion of the taxi industry shutting down operations and demanding the about R1-billion promised to them by the government, leaving many commuters in the lurch.

As the drivers and queue marshals spoke, many travellers didn’t seem bothered as they strolled about wearing no masks. The drivers and marshals said they have no control over these people. They said they only get tough when one tries to board a taxi.

“How do you tell a stranger to put on their mask, because they immediately become aggressive? The government needs to enforce its own rules. Beyond that they are just asking for us to fight one another. You ask a person to open a window because the government said so, but they not only defy but insult you. It’s just practically impossible to enforce it among ourselves without the help of law enforcement,” said Dlamini.

“Minister Mbalula must revisit his plan and assess if it’s workable. This is all new to us all,” Fredericks said.

“We need law enforcement or we are going to kill one another,” added Ndhlovu. “Don’t just speak, commit yourselves,” he said.

“When you tell them that they cannot board if they refuse to wear their masks, they oblige because they know there is no other way home. And for many of them home hasn’t been home for several months if not years.”

Frank Fredericks, a 40-year-old from Zimbabwe, said that since the hard lockdown in March, he has had to deal with many stubborn customers who refuse to wear masks.

The testing centre for Covid-19 at the taxi rank is independent of the Department of Transport and the Department of Health. Owner Menzi Khumalo said: “I am based here, my brother. I have been called to account for the people that I have served… and I have taken responsibility.

“I have helped many people but I have never been properly recognised by both departments.”

When contacted by Daily Maverick, Transport Minister Fikile Mbalula’s spokesperson Ayanda Allie-Paine said she was unable to answer questions because she was driving. DM