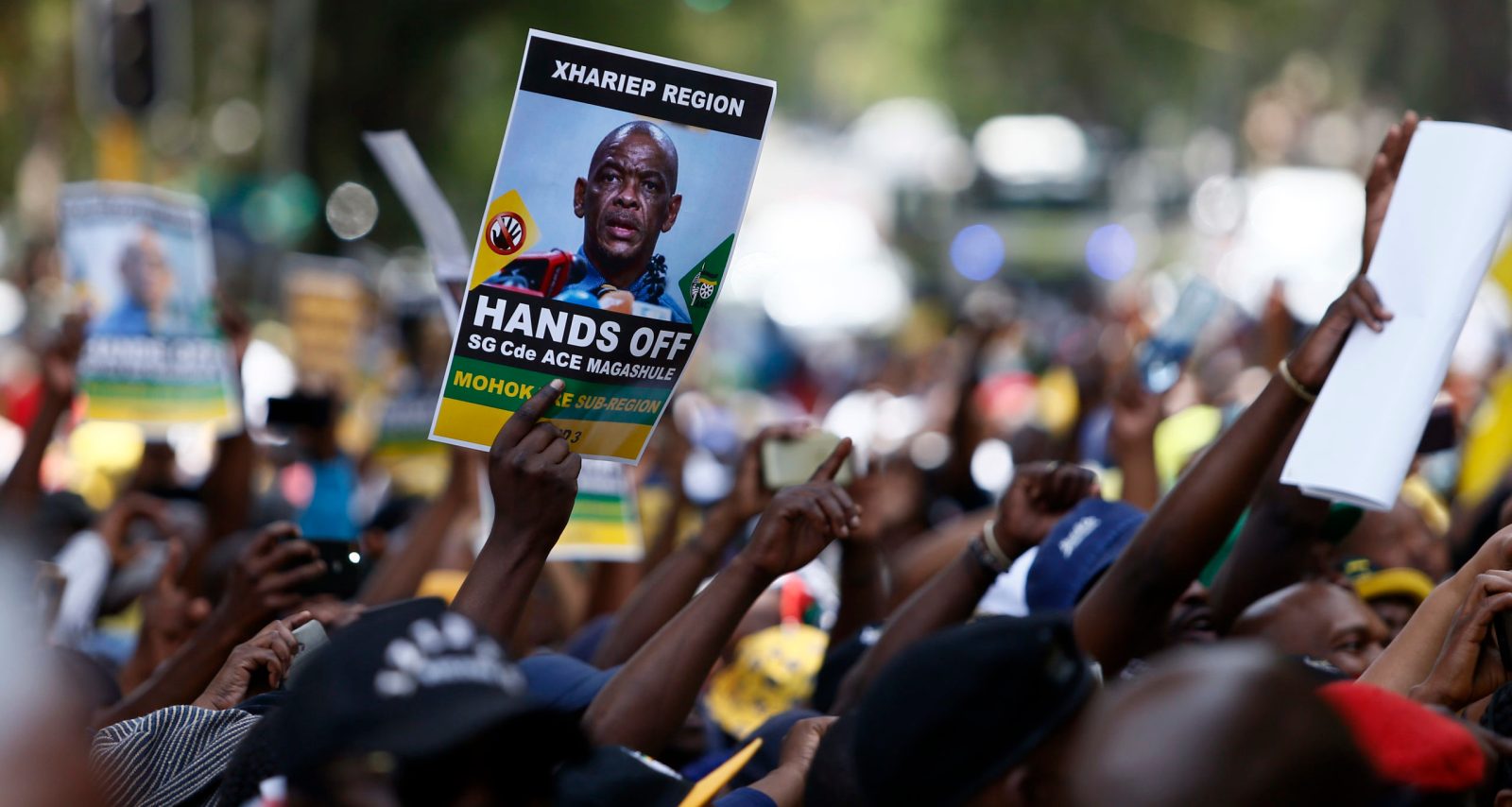 Supporters of Ace Magashule secretary general of ANC outside the Bloemfontein Magistrates Court at a previous appearance. Photo:Felix Dlangamandla/Daily Maverick

However, there’s still radio silence from the party’s National Executive Committee on whether or not the secretary-general will step aside.

The three new appointees to the ANC’s Integrity Commission are likely to be the reason the committee made a no-holds-barred finding that the party’s National Executive Committee (NEC) should instruct Secretary-General Ace Magashule to step aside.

The three-page report on the Magashule issue, written after he met the 11-member Integrity Commission at the weekend, also makes key findings on the quality of the NEC’s principles and decision-making, and says that it cannot find solace in protecting a false unity if that unity is not based on good values.

No space to wriggle free: Ace’s strategy fails as the Integrity Commission insists he must step aside

This is the first time the Integrity Commission has made such an unequivocal report. At the ANC’s August 2020 special anti-corruption meeting, it agreed to bolster the commission, and it appears that the three new appointees helped to strengthen the spine of the body of elders.

The three are: former ambassador Thandi Rankwe, Nkele Ntingane and  Terrence Tryon.  All three are party veterans, and Rankwe spoke out in the worst years of the administration of Jacob Zuma when State Capture kneecapped South Africa.  Ntingane is a former Johannesburg councillor, while Tryon is a long-time ANC member who was secretary-general of the venerated African Teachers Organisation back in the day.

None of them take nonsense. The Integrity Commission is chaired by George Mashamba, a former member of Limpopo’s provincial legislature and a professor of philosophy. He stood against Ngoako Ramatlhodi as Limpopo provincial chairperson in 1996 and won.  At the time, it was a shock win and a clear message to the NEC that it could not dictate leaders to the provinces.

Mashamba is an independent spirit and fearless about standing up to power, as he has now stood up to Magashule, the quintessential ANC strongman.  There are others on the commission who are renowned for being individuals of high integrity, like Father Smangaliso Mkhatshwa who was Tshwane mayor and is one of South Africa’s beloved clerics and leaders. Sophia de Bruyn, a participant in the anti-pass Women’s March on the Union Buildings in 1956, is also of the generation of ANC leaders with old-style political morality and values.

With 11 members now, the Integrity Commission is stronger. It has nailed its anti-corruption colours to the mast with the report on Magashule, which has found that if he does not step aside on instruction by the NEC, he should be suspended.

But there is still radio silence from the party and spokesperson Pule Mabe has kicked the issue into touch, saying that Magashule remains party boss and that nothing is likely to happen before Christmas. The Integrity Commission’s findings are not binding, although President Cyril Ramaphosa has said he thinks they should be. DM