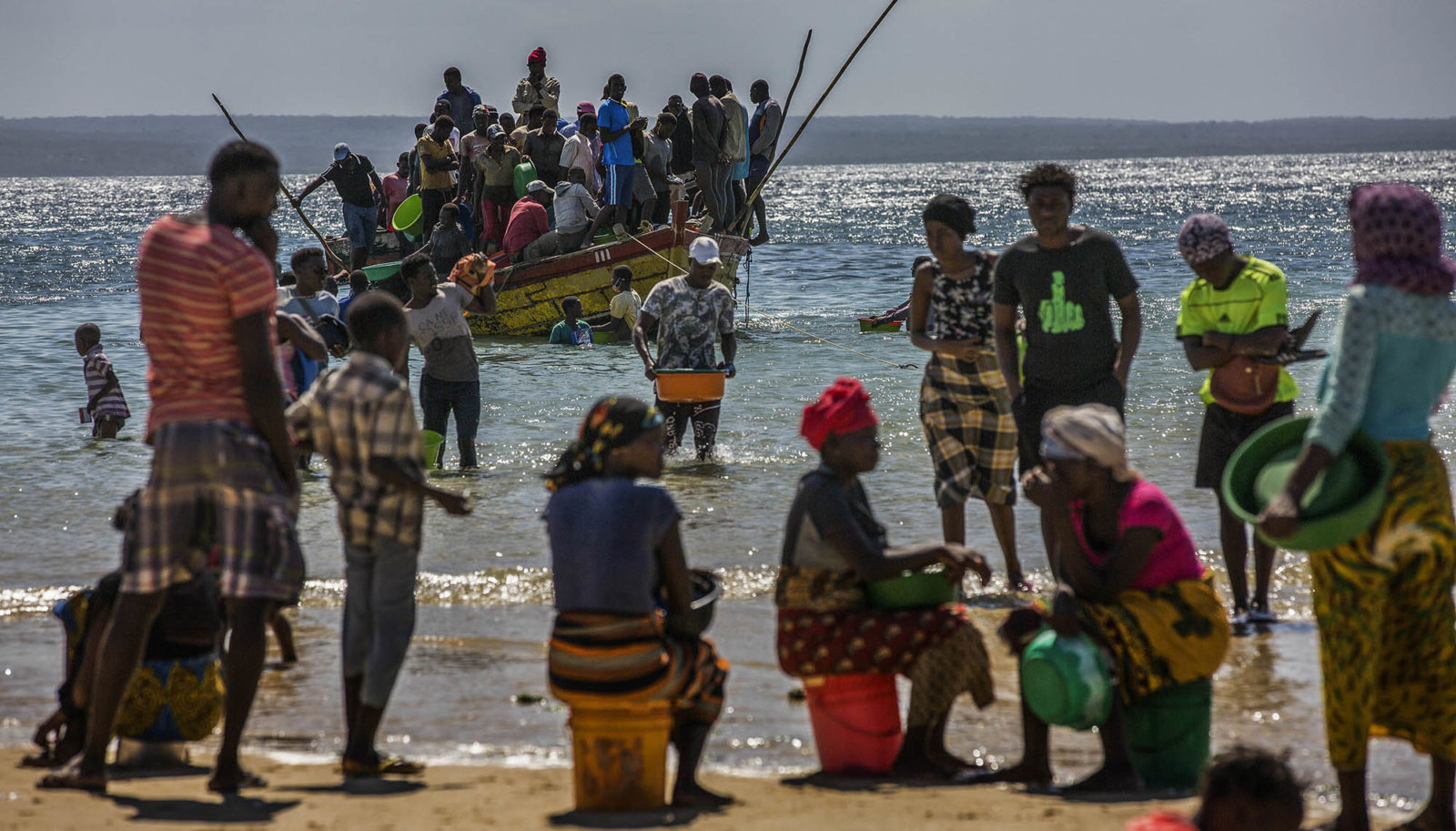 Passengers and cargo board a boat from a fishermen's beach that has become one of the main arrival points for displaced persons fleeing from armed violence raging in the province of Cabo Delgado, in the Paquitequete district of Pemba, northern Mozambique. (Photo: EPA-EFE / RIicardo Franco)

Southern Africa and the wider international community are growing increasingly impatient as they wait for Mozambique to spell out a coherent, credible plan which others can support to help it fight an Islamic State-linked terrorist insurgency in its gas-rich northernmost province, Cabo Delgado.

The Southern African Development Community (SADC) the European Union, France, the US, Portugal and possibly others have all offered Maputo support to combat the Ansar al-Sunna Wa Jamo (ASWJ) insurgents who swear allegiance to IS and are also known as Islamic State Central Africa Province (ISCAP).

On Monday this week presidents Cyril Ramaphosa of South Africa, Emmerson Mnangagwa of Zimbabwe and Mokgweetsi Masisi of Botswana, together with Tanzanian Deputy President Samia Suluhu visited Maputo for an urgent meeting with Mozambican President Filipe Nyusi to try to establish just what he wants.

Official sources said the three leaders – who constitute the troika of SADC’s security organ – made the trip to Maputo to consult Nyusi because he had failed to show up at a summit of the troika in Gaborone late last month, to discuss the regional response to the insurgency. Regional governments were dismayed by Nyusi’s no-show as well as what they regarded as an inadequate presentation by his Defence Minister, Jaime Neto, on Mozambique’s plan to deal with the insurgency.

One official told Daily Maverick at the time that Neto had presented not a plan or strategy but merely a “shopping list” of arms, equipment and ammunition that Maputo would like from SADC and others.

Regional governments and other potential partners in the fight are sceptical about the ability of Mozambique’s security forces to take the fight to the insurgents and their capacity to effectively operate any equipment which might be provided to them. So far, security forces have performed poorly in the fight against the insurgents. The South African-based private military company Dyck Advisory Group (DAG) has been helping by attacking the insurgents with very light helicopter gunships since March. But DAG has reportedly complained that what it lacks are good ground forces to follow up on its air attacks.

Because Monday’s meeting of the four leaders in Maputo was very closed, it is not clear what they agreed upon, apart from postponing any official decision on how to respond to the insurgency until a full SADC summit is held in January.

South African officials and analysts believe Maputo’s indecision stems from a number of factors, including fear of losing control to outside forces, denialism, inherent secretiveness, internal political divisions within the ruling party, Frelimo, as well as tensions between the security forces about how to handle the insurgency, in part because of the incompetence of the military in particular.

DAG is reportedly contracted to the police and internal security forces, which have been in the vanguard, while the South African arms company Paramount, which recently started providing equipment such as armoured vehicles and light helicopters to fight the insurgents, is contracted to the military, according to reports by security analysts.

Cabo Ligado, the conflict observatory monitoring the insurgency, reported this week that having the two private military companies being contracted to different security agencies seemed counterproductive and provided further proof of friction between agencies.

And while Mozambique and its potential partners dither about what to do about the insurgency, South Africa’s National Prosecuting Authority is looking into a possible prosecution against DAG for violating South Africa’s anti-mercenary law by providing military assistance to a foreign power without Pretoria’s official permission, according to the bulletin Africa Intelligence. However, a senior official at the Department of International Relations and Cooperation (Dirco) told Daily Maverick: “Enforcing that law is hardly a priority now when we are trying to contain a regional terrorist threat.”

It seems more likely that Pretoria is turning a blind eye to DAG’s activities, in the absence of any other support to Mozambique in fighting the insurgency. However, Jasmine Opperman, an insurgency analyst at ACLED, the Armed Conflict Location & Event Data Project, which produces the Cabo Ligado bulletin, suggested that Pretoria’s reported moves to act against DAG might be a clue that the South African government was preparing to intervene militarily itself instead.

Delivering the State of the Nation Address in Mozambique’s Parliament on Wednesday, Nyusi seemed to rule out any foreign troop intervention and defended his secrecy about his plans. He said that Mozambique was stepping up international cooperation to combat terrorism, but stressed that national sovereignty was paramount.

“This is fundamental,” Nyusi declared. “We Mozambicans need to develop our own skills. We will be on the front line of defending the country. Nobody will do it for us.”

“We are not going to talk publicly about the strategies the country should adopt,” he said – but he confirmed that many countries from across the globe, including Mozambique’s partners in SADC, had promised assistance.

“We need to know how to manage this support, otherwise we risk creating a salad of interventions in Mozambique,” he warned.

Last week Mozambique’s government spokesperson, Filimao Suaze, who is also deputy justice minister, was categorical, when he spoke to local reporters, that Mozambique wanted no foreign troops in the country.

SADC and some of its members, including South Africa and Zimbabwe, have indicated they are ready to provide support as soon as Mozambique makes clear exactly what it wants. This week Mnangagwa’s spokesperson, George Charamba, told Zimbabwean TV that security in the region must remain the exclusive concern of SADC which had its standby brigade “to deal with any threat which might affect us”.

Charamba’s remarks prompted reports that SADC was ready to deploy the SADC force in Mozambique. However, Charamba had added that SADC’s support might not necessarily be military. The kind of support would depend on Mozambique’s capacity to contain the threat. And so, at Monday’s meeting with Nyusi; Mnangagwa and the other regional leaders present had tried to establish what sort of support Mozambique needed, he said.

… EU Foreign Minister Josep Borrell Fontelles complained in the European Parliament that: “We are waiting for the green light from Mozambique to send out a security experts’ mission who have been appointed since November and who are ready to leave. We are just waiting for authorisation.”

Meanwhile, in Pretoria, South Africa’s Minister of International Relations and Cooperation, Naledi Pandor, said at a press briefing on Monday: “We should fight with our security forces any attempt to introduce terrorism in the region and our country.”

South Africa “would… provide support to a sovereign state as might be asked for by them because we cannot impose ourselves”.

South African officials said that France had offered to patrol the sea off Cabo Delgado with navy ships from its Indian Ocean fleet based on the island of Reunion. France has large economic interests at stake because French energy firm Total holds the rights to the largest gas reserves in Cabo Delgado.

Earlier this month the US Coordinator for Counterterrorism, Nathan Sales, visited Maputo for discussions with the government and told journalists afterwards that Washington was also ready to help Mozambique fight the Islamic State insurgency, largely through improving its law enforcement and border security capabilities. Maputo sources said the government would probably accept this offer.

Portugal, the former colonial power in Mozambique, has also offered support. Defence Minister Gomes Cravinho was in Maputo this month to meet his counterpart, Neto. They discussed increased training for the Mozambican forces, according to Mozambican officials, who said the government also wanted logistics and equipment support from other countries as well as broader development support to address root causes of the violence.

The European Union has also offered support, similar to that offered by the US, officials said.

But this week EU Foreign Minister Josep Borrell Fontelles complained in the European Parliament that: “We are waiting for the green light from Mozambique to send out a security experts’ mission who have been appointed since November and who are ready to leave. We are just waiting for authorisation.”

He added that the EU had a problem as its representatives could not travel to Cabo Delgado to assess the situation. Borrell announced that Portuguese Foreign Minister Augusto Santos Silva had gone to Mozambique as his special representative to try to resolve this problem.

Borrell also sharply criticised the Mozambique government when he said the insurgency was not simply an extension of the global Islamic terrorist movement but was also triggered by poverty, inequality, corruption and by “the population of the area losing respect for a state which could not provide it with what it needed”.

Opperman was also critical of Mozambique, for “lacking a coherent, integrated strategy” to deal with the insurgency.

“I don’t think Frelimo has the political will to deal with this problem with the urgency it deserves due to its obsessive fear that foreign involvement might work against its own interests,” she said.

And regional governments were not applying enough pressure on Mozambique to deal with what was potentially a regional threat, because of the solidarity among the former liberation movements which govern Mozambique and most other countries in the region.

While the presidents and diplomats confer and consult, on the ground in Cabo Delgado the insurgents have occupied the port town of Mocimboa da Praia for more than four months and continue to use it for forays into other parts of the province.

Cabo Ligado reported that insurgents struck close to the liquified natural gas projects in Palma district on 7 December, burning homes in the village of Mute, 25km south of Palma town, and then moving north to burn homes in the village of Nqueo. DAG helicopters had retaliated with air attacks on the insurgents, who had used mortars and rocket-propelled grenades during the fighting.

Cabo Ligado has calculated that since the insurgency began in October 2017, 2,441 people have been killed, 1,237 of them civilians deliberately targeted. DM