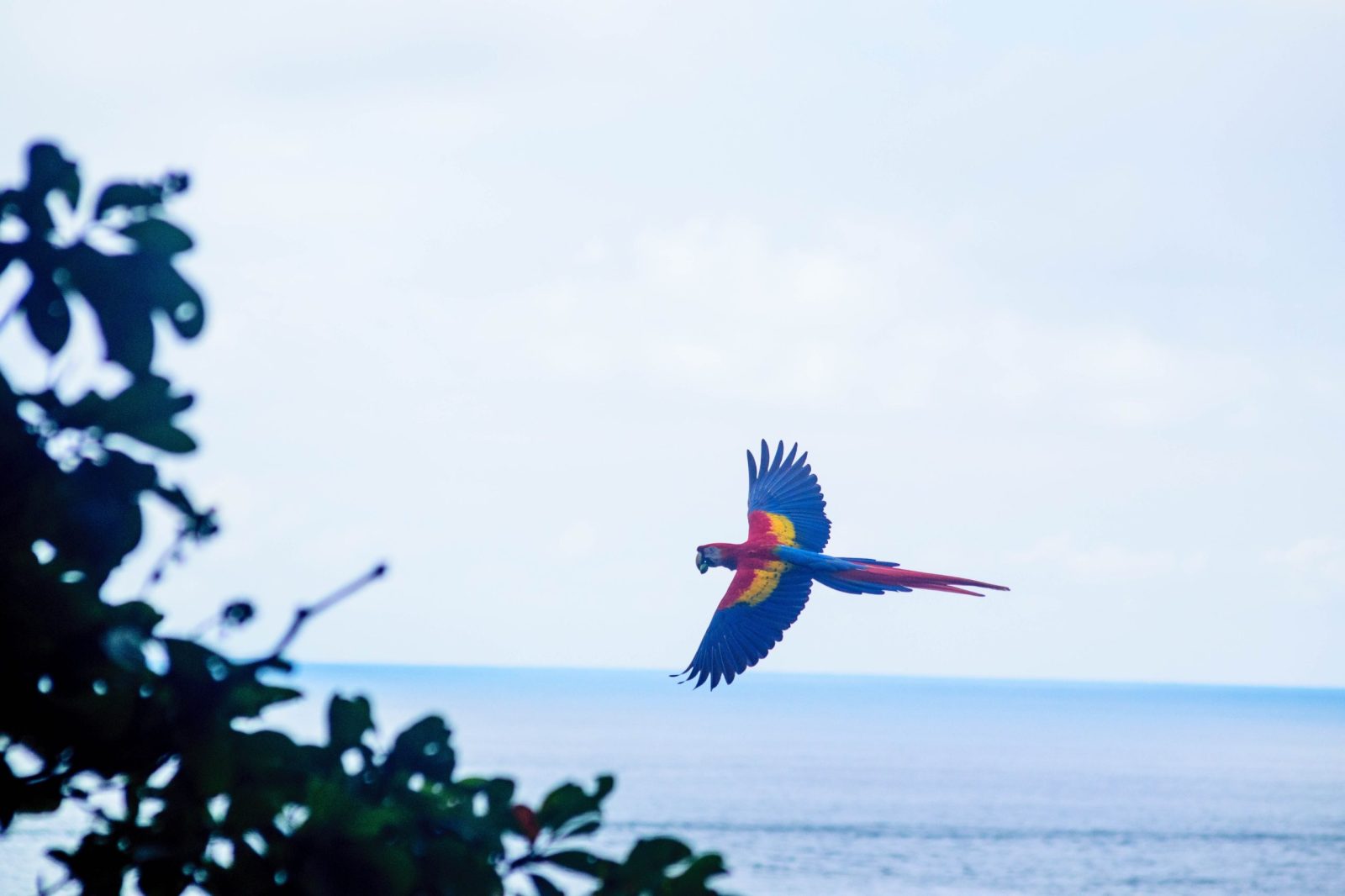 In a far-flung village on a peninsula in Costa Rica, a digital nomad sees the light and starts to realise why the country is known for its ‘pura vida’ – pure life.

There’s a flotilla of pelicans sailing sedately on the silver sea. At times they take off en masse and then plummet back into the Pacific to gulp down fish.

A huge bluish-grey iguana slowly climbs up a palm tree, then stops, its head bobbing as it surveys the world. It has plump legs and vicious-looking serrated spines on its back.

A stream trickles along the beach sand into the sea, seeking the source, the oceanic oneness, the return.

Palm fronds dance in the light breeze and glint in the late-afternoon sunlight.

Shadows lengthen on the jungle canopy.

This is the view from my office, aka the Hotel Montezuma, the ramshackle, decaying establishment above a bar and a restaurant where I’ve been staying for the past two weeks.

It’s in the village of Montezuma, which is situated in the southern part of Costa Rica’s Nicoya peninsula.

Welcome to the Hotel Montezuma, such a lovely place. Plenty of room at the Hotel Montezuma, especially now, during the segunda ola (second wave) of la pandemia in Costa Rica, when the would-be tourists are socially distancing in their city enclaves and gorging on travel documentaries and the cooking channel and the next big Netflix thing.

Got the whole hotel to myself, in fact… a primo room on the first floor, where the hissing and crashing of waves lulls me to sleep at night (well, that combined with the odd Flor de Caña – a quintuple-distilled Nicaraguan rum – and ginger ale).

I learnt about Flor de Caña from Tennessee Pete, a “semi-retired” horse breeder from Knoxville, Tennessee, who I met in the village square (a few wooden benches under colourful shade cloth) outside the hotel.

Tennessee Pete is a man of boundless charm and generosity and boyish exuberance. He looks like Ray Liotta in Goodfellas… acts a bit like him too, come to think of it.

He’s gone to Cali, Colombia, now, with his buddy Luis, a Montezuma local. Asked me to go with them.

“Cocaine there is $3 a gram and top-of-the range hookers cost 20 bucks. I’m going to get a penthouse and a kilo and five hookers,” said Tennessee Pete. “Come with… you’ve only got 10 good years of life left; enjoy it while you can, my friend. And anyway, it’s not the quantity of life, but the quality that counts.”

“Pura vida,” the Ticos (Costa Ricans) say when they meet you. “Pura vida,” when they say farewell. “Pura vida,” after exchanging fist bumps, after you’ve met and swapped life stories and arranged to meet tomorrow at the waterfall for a tuna braai.

It’s a 10,000-strong line of leafcutter ants marching across a path in the jungle to their underground nest, each ant carrying a piece of leaf that’s up to 20 times its body weight, to feed the fungi that they farm and that keep them alive.

It’s a sloth in a tree in a garden outside your hotel room. Observe the sloth, see how painstakingly precise are its movements – like a tai chi master, every movement connecting the furry mammal with its chi, its life-force energy.

It’s a tiny, brilliant green hummingbird hovering above a sweetly scented flower while sucking out the nectar, its heart rate reaching up to 1,260 beats a minute.

It’s a caiman in a thicket in the jungle that you’ve got to by canoe, travelling along winding canals that branch off a lagoon. The caiman is frozen in time, absolutely motionless, its mouth agape, not even twitching at the swishing sound of oars.

It’s an extravaganza of natural beauty in this small country between Panama and Nicaragua, between the Pacific and the Caribbean, between the coming of the conquistadors and the end of the pandemic.

Between the jungle and the deep blue sea

A few days ago Tennessee Pete took me and Cheryl, a friend from Cape Town, down the coast to a small fishing village called Cabuya. We drove past deserted beaches, rocky points, past many bays that embraced the sea, through the impossibly verdant jungle, across a bridge over a river that gushed down from a hill.

“You know, they say Montezuma is a Bohemian village,” said Tennessee Pete.

“Yes, I read that on a website,” I said, and quoted: “‘Known for its Bohemian lifestyle and artistic residents.’”

“So,” said Tennessee Pete, “we should start an exclusive club… the Bohemian Club, a club where you have to meet very exacting standards if you want to join.”

“And what would these standards be?” I asked.

“Well, you have to wake up no earlier than 11, and then have your first beer before you roll out of bed. Followed by a couple of lines. And you should have a tattoo of a dreamcatcher on one of your legs, and make leather necklaces with crystal pendants and/or seashells to sell at the artisanal market, and you must be in or have had a relationship with someone who’s trying to find themself.”

“Why would anyone want to find themself?” I asked. “I’ve spent my whole life trying to lose myself.”

By then we were in Cabuya, so thoughts of the Bohemian Club were put aside as we stopped at a beach, got out of the car and walked across the sea to commune with the dead.

Our destination was the cemetery on Cabuya island, a place that is accessible at low tide when the sea recedes and a rocky walkway appears.

“God, this is paradise,” said Cheryl in the cemetery. “Between the jungle and the deep blue sea. I want to live here forever.”

On the outskirts of the cemetery we flopped down on a warm beach, lay back and closed our eyes, receptive to any wandering spirits, but they must have all been at rest, for none disturbed our thoughts. It was a place of pure peace, perfect for whiling away eternity.

But we didn’t have eternity – yet – to while away and some time later found ourselves in a garden in the village drinking chilled Chilean chardonnay.

The wine tasted of sunlight in an Andalusian orchard, cobwebs in a forgotten library, gunsmoke at a gypsy wedding, ice-melt from an Andean glacier, it smacked of the ocean, tanged of the stars, it was wood sprites dancing in a moonlit glade, it was the essence of life itself. “Pura vida,” said Cheryl, raising her glass. “And felice muerte,” I completed the toast.

What more could a person wish for? DM/MC