A Merc for ‘the movement’ – Zuma’s PA at Luthuli House, ANC fundraisers and the R800K SUV bought with Prasa locos money

A Merc for ‘the movement’ – Zuma’s PA at Luthuli House, ANC fundraisers and the R800K SUV bought with Prasa locos money

A luxury SUV bought with the proceeds of Prasa’s R3.5-billion “tall trains”  contract offers the clearest evidence to date that money siphoned off from the ill-fated tender benefited individuals who worked for the governing ANC.

We detail how some of the money that was flushed through the account of a politically connected law firm bankrolled the purchase of a brand-new Mercedes-Benz SUV. The car was subsequently used by Maria Gomes, an Angolan businessperson and friend of then president Jacob Zuma.

At one point, the vehicle even ferried former Prasa boss Lucky Montana to an ANC birthday bash in Mpumalanga.

Nomsa Mkosana, Zuma’s personal assistant at the ANC’s headquarters, Luthuli House, also made use of the car on at least one occasion.

Montana recently put forward startling claims regarding Gomes’ role as a “fundraiser” for the ANC. He is expected to shed further light on former ANC Treasurer-General Zweli Mkhize’s alleged dealings with Gomes when the Zondo Commission resumes in January.

The point of departure for this investigation is a huge payment of R460.5-million Prasa made to Swifambo Holdings in April 2013. This was the first of eight instalments totalling R2.65-billion the embattled state-owned rail operator paid to Swifambo between that date and July 2015.

After the first payment, Swifambo’s director, Auswell Mashaba, immediately started draining the Swifambo account in a frenzy of payments made to an array of third parties.

One such recipient was Nkosi Sabelo Incorporated, a Johannesburg-based law firm. On 11 April 2013, less than a week after Swifambo secured the first payment from Prasa, the company forwarded R14.3-million to Nkosi Sabelo. Mashaba again hit the transfer button on 22 April, this time depositing R14.2-million in the law firm’s account.

So, as April 2013 drew to a close, Nkosi Sabelo sat with a neat R28.5-million that directly stemmed from the Prasa contract.

On 30 April, an amount of just under R808,000 was transferred from the law firm’s account to a car dealership in Johannesburg’s East Rand area. This was for the purchase of a brand-new Mercedes-Benz GL350 SUV.

But the shiny set of wheels clearly wasn’t bought for the benefit of either George Sabelo or Hugh Nkosi, the firm’s two partners. 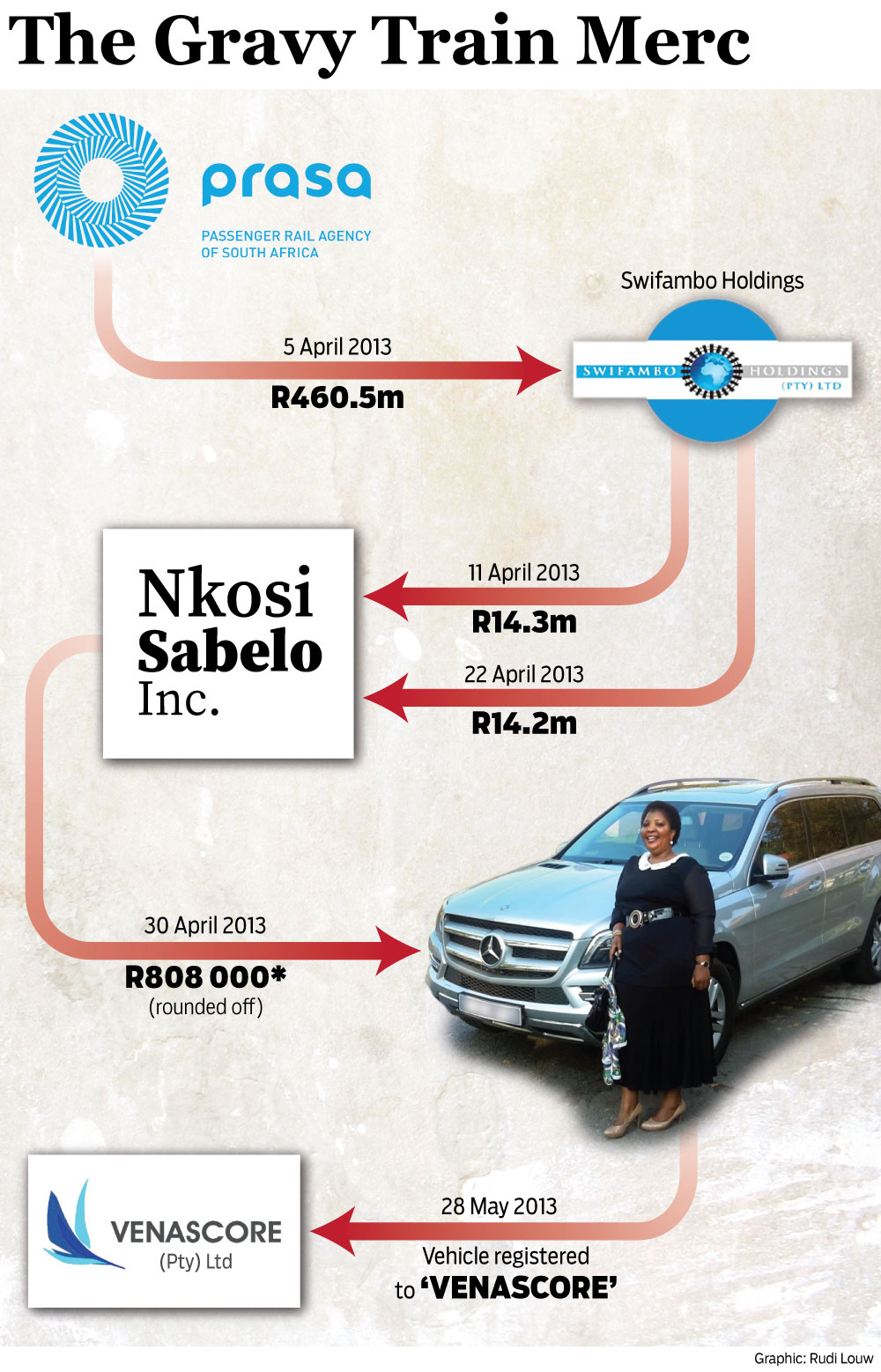 In May 2013, the vehicle was instead registered in the name of an obscure shelf company called Venascore. Officially, this entity only had one director — 44-year-old Johannesburg resident Samela Pantshwa. Company records notwithstanding, Pantshwa has denied that she was in any way involved with Venascore.

But a record filed with the Companies and Intellectual Property Commission (CIPC) in February 2013 — two months before Nkosi Sabelo paid for the Mercedes — shows that Pantshwa wasn’t the only individual tied to the entity.

Through a CoR 21.1 notice, Venascore’s business address was changed to a house in Atholl, a stone’s throw from the Sandton CBD. The property belonged to Maria and Domingos Gomes, an Angolan couple first linked to the Prasa train deal in this 2016 report. It was revealed that Swifambo and other entities owned by Mashaba had paid some R80-million to Nkosi Sabelo and Similex, a company Gomes and her husband had registered in 2013. The money was supposedly meant to benefit “the movement” or the ANC.

The report also detailed how Zuma had visited the Gomes property in the same timeframe.

Whatever business Venascore did, it did from the Gomes’ house in Atholl, the CIPC document suggests. But there is more.

Several business cards, created in early 2013, serve as further confirmation that Pantshwa was not to be the venture’s sole principal. A local graphic designer produced Venascore business cards bearing the names of Pantshwa, Maria and Domingos Gomes and, crucially, one Nomsa Mkosana.

In September 2019, Scorpio established that Mkosana was Jacob Zuma’s assistant at Luthuli House while he was president of both the ANC and the country.

“Indeed, Ms Nomsa Mkosana is working for us as the support staff to the former president Jacob Zuma,” party spokesperson Dakota Legoete told Scorpio. It is not clear whether or not she is currently employed at the party’s headquarters.

Mkosana’s Facebook page offered more than a few useful clues. Apart from several photos of her and Zuma, she also posted a picture of herself next to the Mercedes-Benz (see photo in the infographic).

The picture was uploaded in April 2014, about a year after Nkosi Sabelo had paid for the car.

A source familiar with some of the goings-on at the Gomes residence offered further information.

“She used the car for a wedding she attended over a weekend. She collected it at the Atholl house,” said the source. This person was not sure when exactly this occurred, or whether Mkosana had used the vehicle more than once.

While Zuma’s ANC PA used the vehicle for a personal outing, Maria and Domingos Gomes drove the car to an official party gathering on at least one occasion.

They were accompanied by none other than Montana, Prasa’s then CEO. Montana recently put forward new claims regarding former ANC Treasurer-General Zweli Mkhize’s alleged dealings with the Gomes couple.

The former Prasa boss, who has described Maria and Domingos as “major” fundraisers for the governing party, says he hitched a ride in the Mercedes to the ANC’s birthday festivities in early 2014. The Gomeses picked him up at his house in Pretoria, Montana told us.

“I travelled with them to the ANC January 8 celebrations in Mbombela in January 2014,” explained Montana.

In other words, the CEO of the state-owned entity that awarded the multibillion-rand contract to Swifambo travelled to an official ANC event  in a vehicle bought with allegedly laundered funds pinched from the very same contract. 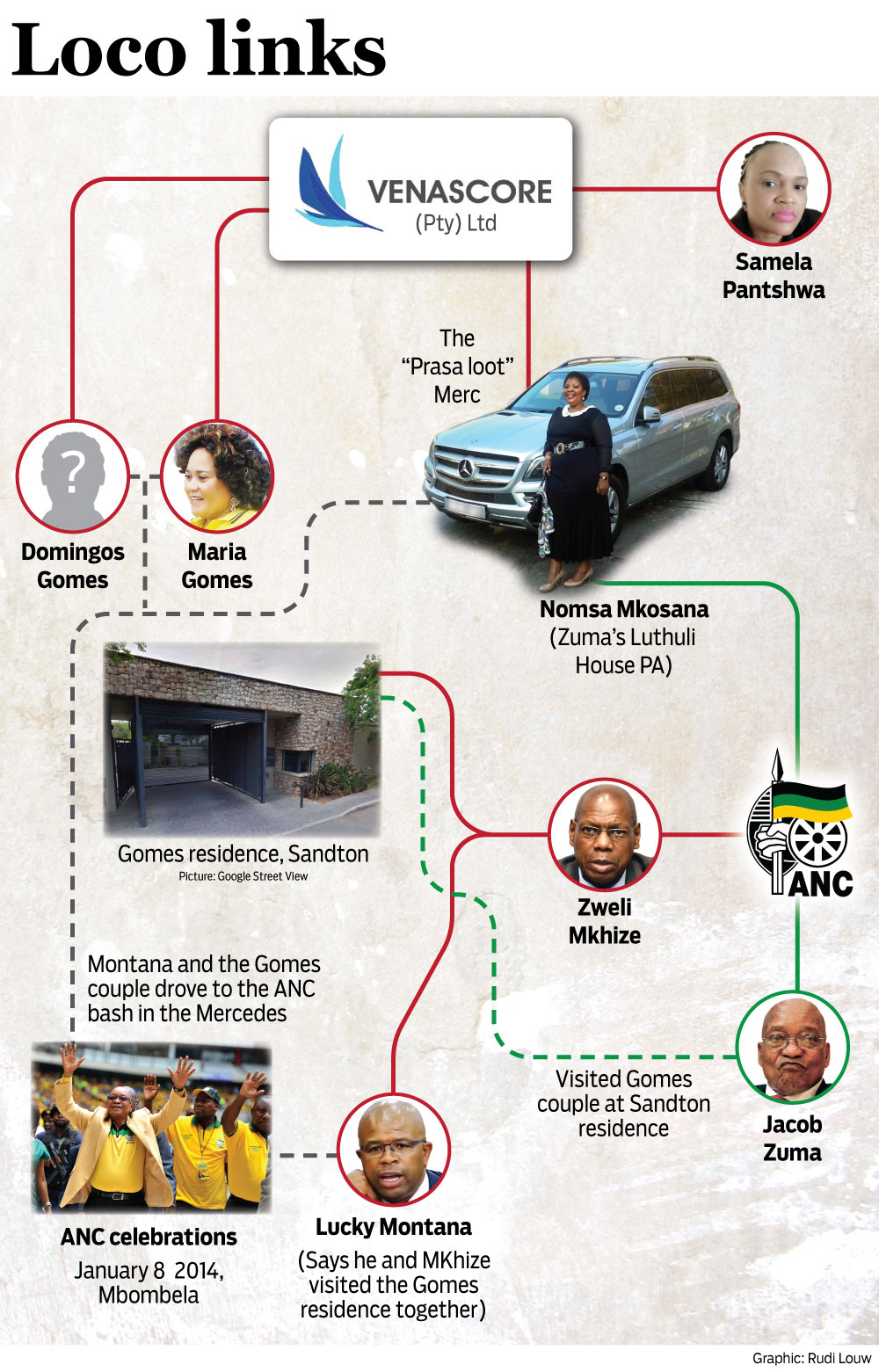 Two scathing court judgments have found that the locomotives contract had been corrupt, so it stands to reason that anything purchased with money linked to the deal may be viewed as the proceeds of corruption.

But Montana claims he had no idea how or with what money the Mercedes had been bought.

“Remember, I only became aware of the R80-million [paid] to Similex and George Sabelo when Popo Molefe deposed [to] an affidavit in the Swifambo matter, almost a year after I had left Prasa,” said Montana.

Gomes and Sabelo did not respond to multiple requests for comment. Attempts to reach them by phone were unsuccessful.

Mkosana appeared to have read a WhatsApp message requesting her comment, but she did not respond.

We contacted the Jacob Zuma Foundation and Eric Mabuza, one of Zuma’s most recent instructing attorneys in the ceaseless legal effort to stave off the consequences of his presidency. Neither responded.

Despite clear evidence of the flow of funds, Mashaba has previously denied that the transfers he had made to Nkosi Sabelo or to Similex were in any way related to the train deal. The payments were “personal contributions” to the ANC, he stated in an earlier affidavit filed in a civil matter around the Prasa tender.

“The matter is trite. I have nothing more to add,” Mashaba told Scorpio this week.

The ANC seemed equally eager to bury the Gomes matter.

“The current leadership of the ANC as elected at the 54th National Conference is not aware of the Gomes couple and their activities. They are not part of the ANC fundraising team,” said party spokesperson Pule Mabe. DM