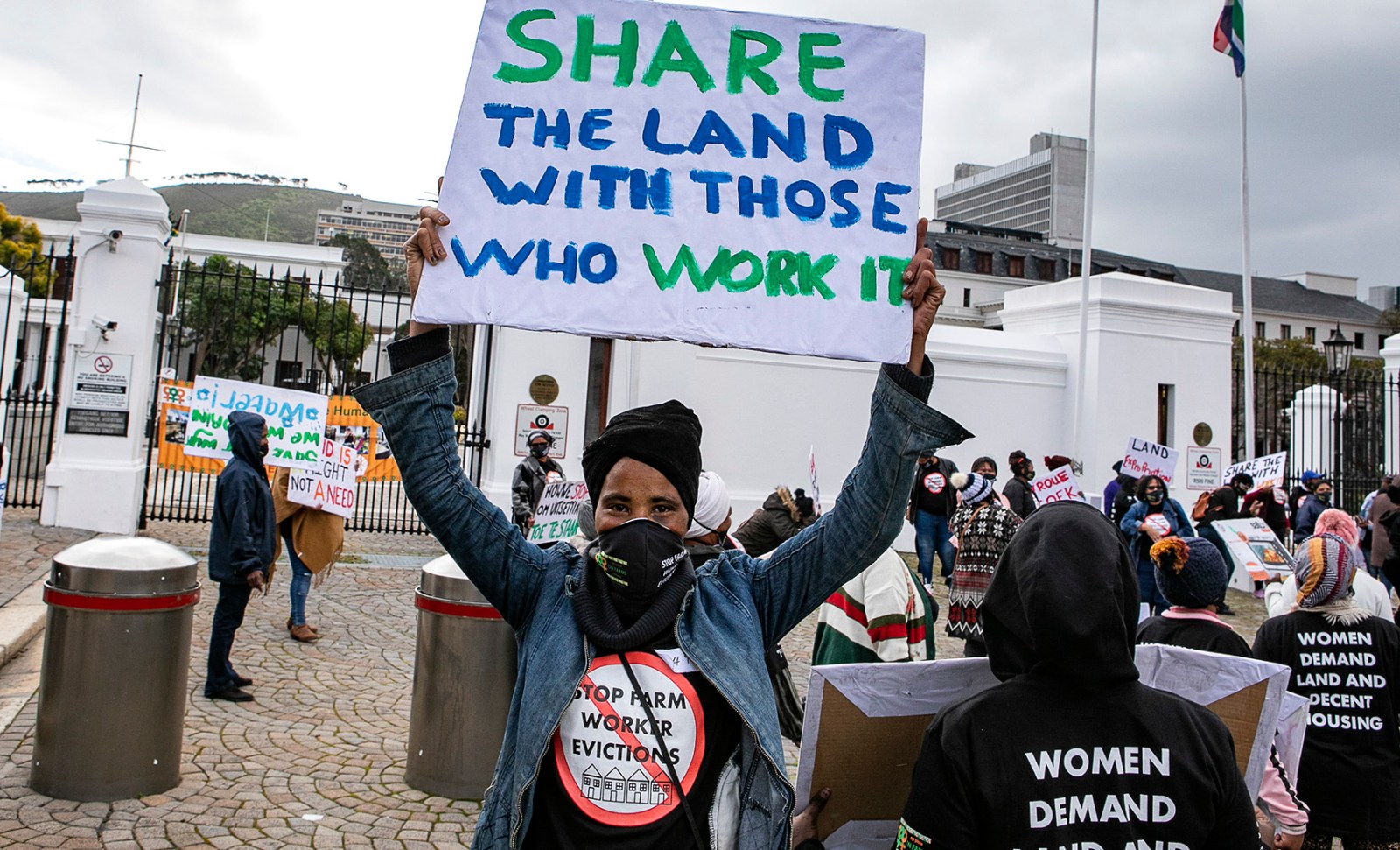 A woman protests in front of Parliament. Twenty-six years after apartheid, Cape Town remains characterised by spatial inequalities, with the majority of poor and working-class families (who are predominantly black and coloured) still being confined to townships and informal settlements on the outskirts of the city. (Photo by Gallo Images / Jacques Stander)

Youngsfield, Wingfield and Ysterplaat are military airports that are either owned by the Department of Defence or under the custodianship of the Department of Public Works. These sites can provide housing for up to 67,000 households. Instead, they remain underutilised.

On 7 December 2020, civil society organisations* submitted a joint proposal to President Cyril Ramaphosa calling for the urgent release of three large and exceptionally well-located parcels of unused or underused military land in Cape Town for the development of low-income housing.

The three identified sites are Youngsfield, Wingfield and Ysterplaat, military airports that are either owned by the Department of Defence or under the custodianship of the Department of Public Works. These sites can provide housing for up to 67 000 households. Instead, they remain underutilised.

Twenty-six years after apartheid, Cape Town remains characterised by spatial inequalities, with the vast majority of poor and working-class families (who are predominantly black and coloured) still being confined to townships and informal settlements on the outskirts of the city. Many peripheral areas in Cape Town have limited access to basic services, forcing families to share an insufficient number of temporary outdoor toilets and to collect water from communal standpipes.

School performance in these areas is generally worse, gang violence is rife, substance abuse is more common, and social amenities such as hospitals and clinics are difficult to access. Poor and working-class people spend a disproportionate component of their income and time on transport, travelling to work or to access a better quality of social services.

Spatial inequality has been exacerbated by the state’s housing policies that prioritise the development of state-subsidised housing on the outskirts where land is cheaper. This has had the effect of entrenching spatial injustice and social exclusion by creating “poverty traps” far from economic opportunities and social amenities.

The economic ramifications of the Covid-19 pandemic are borne disproportionately by the poor and working class with many facing higher rates of unemployment, diminished incomes and increased rates of hunger. Those living in the densely populated informal settlements are also exposed to an increased risk of contracting the virus and, given the presence of comorbidities in poor and working-class communities, are more likely to die as a result of it. In this time of crisis, decisive action is urgently needed.

In 2019, the Western Cape provincial housing backlog stood at over 600 000 families, of which 365 000 are in the City of Cape Town alone. The overwhelming scale of the need means that the City itself believes that it will be over 70 years before it can eradicate the housing backlog. The impact of the pandemic has made it impossible to ignore how many live in inadequate living conditions.

The increase in incidents of land occupations in Cape Town and other cities, soon after the imposition of the national lockdown, is an example of the extent to which the need for land has reached a breaking point. The Spatial Planning Land Use Management Act (SPLUMA) is national law which places obligations on the state – at all levels – to develop spatially just cities.

In line with SPLUMA, a group of civil society organisations have called on national government to release three large, well-located and under-utilised parcels of military land in Cape Town for the development of affordable housing.

Each of the sites is located within 10km of the Cape Town CBD and close to existing economic and industrial nodes (offering employment opportunities and requiring less money to be spent on travel). The sites are close to primary and high schools, social facilities, police stations and health services. They are also close to train stations and bus stops and fall within areas that have been earmarked for additional transportation infrastructure.

The considerable size of these sites (totalling 668 hectares) has the potential to ease a significant amount of pressure off the housing shortage. Best of all, the sites already have existing bulk infrastructure thereby keeping the development costs low.

For decades civil society organisations and politicians have called for public land to be released for the development of affordable housing. In 2017, the Minister of Defence and Military Veterans, Nosiviwe Mapisa-Nqakula, announced that her department intended “sweating surplus defence endowment assets” — including unused or under-utilised land. In 2018, former Western Cape Premier Helen Zille specifically identified Ysterplaat, Youngsfield and Wingfield as part of a package of five well-located military properties that, if released, have the potential to deliver 100 000 affordable homes — thereby meeting almost a third of the City’s affordable housing.

A particular advantage of releasing Ysterplaat, Wingfield and Youngsfield for the development of affordable housing is the size of these sites (totalling 668 hectares) which have the potential to deliver significant economies of scale in terms of serviced land delivery and most immediately take the greatest pressure off the housing shortage.

Most recently, the Minister of Public Works and Infrastructure Patricia De Lille, under whose custodianship these parcels of land fall, indicated that she would be open to releasing these sites for free.

A core principle of the Government Immovable Asset Management Act (GIAMA) is that immovable assets should be used efficiently by departments to achieve their service delivery objectives. If the asset is not used efficiently by its department, it then becomes surplus. GIAMA provides that in relation to a disposal, the minister must consider whether the immovable asset can be used by another department or departments; to promote the social development initiatives of government; and to promote government’s socio-economic objectives, including land reform, black economic empowerment, alleviation of poverty, job creation and the redistribution of wealth.

The State Land Disposal Act gives De Lille power to transfer state land over which the Department of Public Works has custodianship to another state or public entity (such as a municipality). The president also has discretionary powers to sell, exchange, donate or lease certain state land on behalf of the state.

Importantly, the wards in which both Wingfield and Ysterplaat are located (wards 56 and 55 respectively) form part of the identified Covid-19 priority areas within the City of Cape Town. On 15 May 2020, the minister of human settlements declared 136 areas nation-wide as Priority Human Settlements and Housing Development Areas (PHSHDAs). The aim of the PHSHDAs is to synchronise and fast-track the development of human settlements in these areas by utilising existing housing programmes contained in the National Housing Code of 2009.

The legal, policy and programmatic mechanisms exist, all the state needs to do is implement them and expedite development processes for the purposes of developing the sites. The sites fall within areas that have been earmarked for additional transportation infrastructure. Ysterplaat and Wingfield also fall within an area that has been specifically identified by the City and the province as an urban development corridor.

A particular advantage of releasing Ysterplaat, Wingfield and Youngsfield for the development of affordable housing is the size of these sites (totalling 668 hectares) which have the potential to deliver significant economies of scale in terms of serviced land delivery and most immediately take the greatest pressure off the housing shortage.

If these sites are used for the development of mixed-use and incremental (self-build) housing, the land has enormous potential. At 60 dwelling units per hectare gross, Ysterplaat (adjacent to Century City) can deliver 15 348 units (255.8ha), Wingfield (located on the key transit artery of the Voortrekker Road corridor) can deliver 16 206 units (270.1ha) and Youngsfield (close to the southern economic and public transport corridor) can deliver 8 502 units (141.7 ha).

The housing crisis in Cape Town disproportionately affects poor and working-class families. A shift away from the “cheap land, poor location” default response to housing delivery is needed. The state and municipalities should proactively identify, acquire and release well-located public land for the development of subsidised housing.

The current use of the identified military sites is inefficient and irrational in the context of a profound housing and segregation crisis facing Cape Town. By unlocking and releasing well-located state land for this purpose, the state will make considerable strides in alleviating the housing affordability crisis, reversing Cape Town’s apartheid legacy, and ameliorating the devastating health and economic consequences of the Covid-19 pandemic. DM

*This article is an initiative on behalf of the following civil society organisations: Community Organisation Resource Centre (CORC), the Development Action Group (DAG), the Legal Resources Centre (LRC), and Ndifuna Ukwazi with Professor Vanessa Watson, City and Regional Planning, University of Cape Town; in respect of our joint proposal submitted to the Presidency on 7 December 2020.

Anneline Turpin is an attorney with the Legal Resources Centre.