Amazon in Africa: A walk through history in the Two Rivers Urban Park 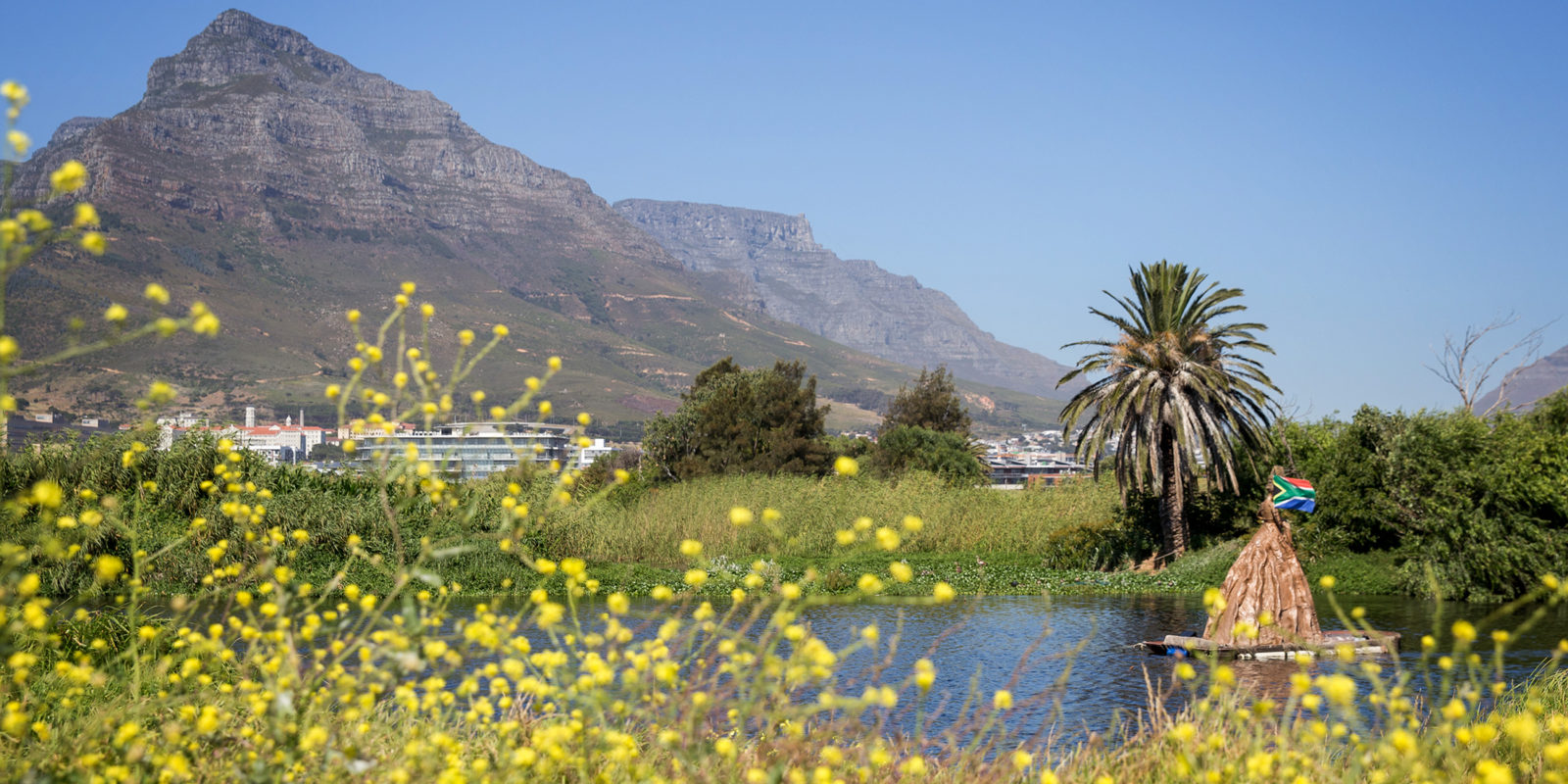 Developers want to turn the River Club site between the Liesbeek and Black rivers in Cape Town’s Observatory into Amazon’s African headquarters. A significant part of the historical floodplain would be covered with high-density development, even though this is a sensitive conservation area with important heritage sites.

At a time when Covid-19 has created a potentially long-term global excess of office space as more professionals work from home, the City of Cape Town seems to be considering giving private developers the green light for a controversial R4-billion mega development of residential, hotel and commercial buildings in a public park in the heart of the city.

On 11 December, I joined a small group on a walking tour with civic activists Marc Turok and Tauriq Jenkins through the Two Rivers Urban Park (TRUP). Together with the Observatory Civic Association and the Two Rivers Urban Park Association (TRUPA), Marc, Tauriq and many others have, for many years, been opposing relentless attempts by private developers, now also backed by Jeff Bezos’s Amazon Group, to redevelop the River Club site, a recreational area that is ecologically sensitive and rich in cultural heritage.

It appears the developers want to turn the site, situated between the Liesbeek and Black rivers in Observatory, into Amazon’s African headquarters. If this happens a significant part of the urban park would be paved over to create 150,000m² of upmarket residential, commercial shopping, hotel and office space, with the largest tenant said to be Amazon.

Should this development go ahead a significant part of the historical floodplain would be covered with high-density development, even though it is protected as an environmentally sensitive conservation area with important cultural heritage sites. Although the TRUP was established in 2003 after five years of planning and wide consultation, since the River Club was sold by Transnet (now Prasa) in 2015 for a paltry R12-million, the new owners, Liesbeek Leisure Property Trust (LLPT), together with the City and two provincial departments, have been trying to push through this mega development.

After four years of consultations, environmental and heritage impact assessment reports, tribunals and appeals to various government bodies, it appears the future of the TRUP remains undecided. Objections to the development have come from 20,000 people, who signed a petition, as well as 180 interest groups, including representatives of the First Nations Collective and the Goringhaicona Khoi Khoin Indigenous Traditional Council.

First Nations representatives claim the area has national and international heritage significance as a cultural landscape where summer grazing by transhumant pastoralists such as the Goringhaiqua took place in the pre-colonial period. This was also the place where the first colonial barriers, fences and frontiers were established by the Dutch East India Company to restrict indigenous peoples’ access to fertile land and water and grazing resources.

It was also here that Portuguese soldiers under Francisco d’Almeida were defeated in 1510 by the Goringhaiqua, and 150 years later intense indigenous resistance to colonisation took place during the Frontier War of 1659-60. Here too, from 1657 onwards, indigenous people were displaced to make way for the granting of the first lands under individual tenure along the Liesbeek River.

Although Jody Aufrichig of the LLPT claims he has had extensive and fruitful consultations with representatives of the First Nations Collective, not all of the First Nations groupings have accepted his offer to create a heritage cultural and media centre, indigenous medicinal garden, heritage-eco trail and garden amphitheatre within the redeveloped River Club precinct.

Jenkins, the commissioner of the Goringhaicona Khoi Khoin Indigenous Traditional Council, has called for a reconsideration of the developers’ plans to start pouring hundreds of tons of concrete onto this deeply scarred and environmentally sensitive landscape: “It was a great hurt when the first pole was placed by Van Riebeeck onto this ancient terrain on the banks of the Liesbeek River and the Black River. The wound holds a trauma everyone in this country faces… It’s time we paused and began to restore.”

Other heritage sites of cultural significance in the TRUP include the early industrial development of windmills such as Oude Molen and the Nieuwe Molen, as well as the early homesteads and werfs along the Liesbeek River that Jim Hislop (2014) writes about in Wheatfields & Windmills: The Old Homesteads and Farms of Observatory.

It remains to be seen, however, whether the LLPT developers and the City will be willing to entirely re-evaluate the current proposal and build Amazon’s Africa headquarters at another more suitable and less culturally and environmentally sensitive location.

Other heritage sites of cultural significance in the TRUP include the early industrial development of windmills such as Oude Molen and the Nieuwe Molen, as well as the early homesteads and werfs along the Liesbeek River that Jim Hislop (2014) writes about in Wheatfields & Windmills: The Old Homesteads and Farms of Observatory.

Cultural, medical and scientific sites of significance in the area also include the Astronomical Observatory, Valkenberg Mental Hospital and the Alexandra Institute. But it is First Nations cultural heritage and environmental matters that seem to be of primary concern for local activists.

Social mobilisation against the LLPT’s redevelopment of the River Club by civic activists has been boosted by the findings of the numerous environmental impact assessment reports that virtually all concur that the proposed development in this ecologically sensitive riverine system and 100-year floodplain will cause irreparable environmental damage. It was with these environmental and First Nations heritage concerns in mind that Marc and Tauriq planned our walk through the TRUP.

The walk began at the South African Astronomy Observatory, a National Heritage site and scientific precinct overlooking the confluence of the Liesbeek and Black rivers. From this elevated point Marc drew attention to the numerous environmental and cultural heritage threats posed by proposed developments in the TRUP, including construction of a 10,000-seat Hartleyvale football stadium, the high-rise Amazon campus and a highway connection to be built through the park.

Marc also discussed the alternative plans that were developed by TRUPA stakeholders for protecting First Nations cultural heritage and the riverine environment and making the urban park more accessible to Capetonians as an inclusive recreational and educational space, rather than as an exclusive site for upmarket apartments and big business. He also sees the park as a catalyst for his vision of restorative justice for a city still scarred by spatial apartheid.

TRUPA stakeholders used co-design participatory planning methods to identify alternative sites for high-density affordable housing and commercial and office development along the existing spatial development corridors and nodes along the perimeter of the TRUP. As we drove past these industrial areas he pointed out that these well-located, but often underused and run-down inner-city spaces, have good access to public transport and work opportunities, and could also benefit from the catalytic potential of the TRUP with its open space and sport, recreational, educational, heritage, scientific and health facilities.

The story of the struggle to protect the TRUP is also about the difficulties encountered by indigenous activists trying to build a unified First Nations political movement.

Such future urban development, Marc insists, could create opportunities for undoing the spatial legacies of apartheid in places such as Salt River, Maitland and Ndabeni. Marc pointed out that while the site owned by the LLPT is only 15ha, retaining this area and the rest of the TRUP as a protected commons area with limited redevelopment, would benefit the beneficiaries of the future development of the 1,500ha of well-located land surrounding the park. Using this land bordering the TRUP could help achieve the transformation objectives of urban spatial justice and would benefit from the existing park facilities.

The story of the struggle to protect the TRUP is also about the difficulties encountered by indigenous activists trying to build a unified First Nations political movement. Standing together in the parking lot of Oude Molen, Tauriq told me about the recent divisions among the various First Nations groups and how this had created an opening for divide-and-rule strategies reminiscent of Lord Frederick Lugard’s colonial system of British Indirect Rule.

Despite numerous challenges and internal conflicts, the First Nations and civic groups have had some significant successes in contesting the plans proposed by the LLPT and the Amazon Group to turn the TRUP into a theme park for global capital. For instance, as a result of concerted civic activism, the Zondo Commission of Inquiry into State Capture is investigating whether there was anything inappropriate about Transnet’s 2015 sale to LLPT of 15ha of protected state land (the River Club) which was under its custodianship, for a mere R12-million, well below the market price.

Civic organisations such as Ndifuna Ukwazi and Reclaim the City have also made significant strides in using the law to scrutinise and challenge the sale of public land to private developers in cases where such transactions do not prioritise the provision of affordable housing close to the city. The sale of the River Club to the LLPT is yet another instance of the privatisation of public resources without adequate public participation in the urban development of the city.

Recent activist mobilisation in the TRUP and at Tafelberg in Sea Point and the Philippi Horticultural Area suggests the politics of spatial justice and public accountability is beginning to counter global capital’s voracious appetite for limitless growth, regardless of human and environmental costs and “externalities”. Perhaps the story of “Amazon in Africa” will be one in which public space and civic participation are successfully defended in the name of the making of a democratic and inclusive city. DM

Professor Steven Robins is with the Department of Sociology & Social Anthropology, University of Stellenbosch.

Big Pharma, Dirty Lies, Busy Bees and Eco-Activists may be one of the most important SA books published in 2020