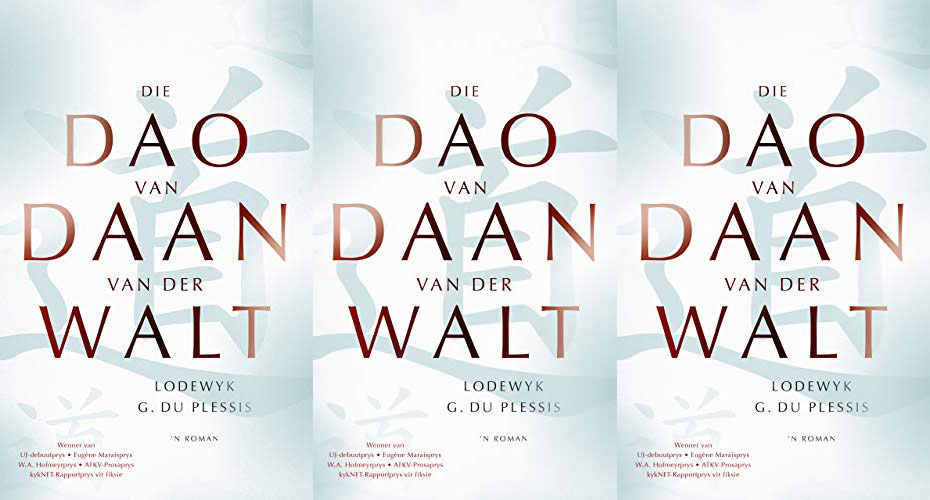 An interview with retired judge and critically acclaimed Afrikaans author Lodewyk G du Plessis* provides insight into his life and his novel, which was published when he was 80.

Die dao van Daan van der Walt, Lodewyk G du Plessis’ debut novel published in 2018, received many prizes, such as the Helgaard Steyn Prize, the Eugène Marais Prize and the University of Johannesburg Debut Prize to name only a few; and it is a noteworthy achievement for a debut novel, especially for the author, who only started writing in his 70s.

Du Plessis grew up poor, but he explains that, “As a child I had no concept of poverty. I grew up during the Second World War. Times were difficult for everyone. We all walked to school barefoot. I started working during the school holidays at the age of 14.”

It was during those formative school years that his love for words began.

“We had to study Die Grenslose, by WA de Klerk. A story about the clash between idealism and materialism. I recall how my teacher, Mr Mentz, stood next to the window with his foot on the heater. He would read a few paragraphs and then he would start talking, almost reminiscing, explaining what it all meant… he would talk about himself, his idealism, his love for Latin and the classics, and contrast that with the reality of teaching a group of 14-year-old children in a mining town Afrikaans literature well beyond their understanding.

“I am certain he was the teacher who awakened my interest in literature and history and the classics. I was fortunate enough to tell him so, many years later.”

His mother was born on 24 November 1901, “in a tent in Kimberley. The tent stood amongst hundreds of similar tents in a British concentration camp during the Anglo-Boer War. Whilst my grandmother was in the throes of childbirth her cries were drowned by the thunderclaps of a violent storm raging outside,” he recalls. Just days before, she had stood before her farmhouse as it was burned to the ground, with everything inside. Her husband, Du Plessis’ grandfather, had been sent to St Helena, where the British held some of the Afrikaner prisoners of war.

“During the war, he lost everything other than a bare piece of land and the hope that he would get some of the promised compensation, which never arrived.”

And yet, “Neither my grandmother nor my mother ever blamed anyone for the misery inflicted upon them. What happened was simply a fact of life and they had to get on in life on their own steam.”

After the war, the family was forced to move to Johannesburg. Du Plessis’ mother had to leave school in Grade 8 to work in a Chinese laundry, where she met her husband, Du Plessis’s father, who brought clothes in for cleaning.

When Du Plessis started studying at university, he chose law, which he went on to practise as a prosecutor, advocate and high court judge for many years. He explains that he had to learn “to be acquainted with the vicissitudes of life and human nature, a prerequisite for making a success as an advocate and for the execution of a judge’s duties”.

After he retired from the Bench in 2003, he spent a few years travelling, particularly in Asia.

“There, I discovered a fascinating and interesting world, with their food, their customs, their culture, their history and philosophy. It is also a world that is fast disappearing. Malaysia was my base… From Malaysia I travelled to Vietnam, Laos, Cambodia, Philippines, Thailand, Indonesia, Taiwan and China.”

And then, he began writing his novel; he was in his 70s. “I believe most people live with a story they want to tell. Having lived a long life there were many things I felt needed to be said.”

And yet, the author explains, “It’s one thing to write a legal opinion or a judgment, it’s something else writing fiction. I thought I knew how to write when I started writing my novel. I soon found out I was wrong. In legal writing one has all the facts, in fiction one has to create the facts and then develop the plot and decide how to structure the story. Dialogue in fiction is completely different from ordinary conversations. It took me the best part of six years to write Die dao van Daan van der Walt.”

Die dao van Daan van der Walt is inspired by the things he sees around him, “the quirks of humanity” and the books he reads. The novel chronicles Daan van der Walt, a Kalahari farmer who, on a visit to his son Jan-Willem in China, gets an attack of vertigo, leading him to lose his balance. His son takes him to a monastery where a Master Yang teaches him taiji to restore both his emotional as well as physical balance.

“The word ‘dao’ literally means the way, path, road… The way of the ‘dao’ is to discover how to live a balanced life,” he explains. Du Plessis describes the character as someone “whose life is a complete mess through his own stubbornness and through circumstances beyond his control”.

Daan restores his emotional balance partly through extensive letters addressed to his deceased wife, Magrieta, out of the Temple of Eternal Peace and partly through a cathartic exercise of chronicling the history of his life.

“You can tell your deceased wife a lot of things you could not tell her when she was alive. In the novel, Daan takes stock of his life by writing his history and by attempting to confess his wrongdoings,” the author says.

In the effort to find the root of his emotional balance, the novel explores Daan’s struggles with his fluid sexuality, which he repressed due to his religious belief.

“For him, religion was important, unfortunately also for the wrong reason: because it denied him the right to live his life in accordance with his sexual orientation. My novel is all about his struggles with, and how he frees himself from the absolutism preached by the church. His struggle is not just about the freeing of the body, but also about the freeing of the mind.”

Other themes include aging and death; almost everyone around Daan has died and he is himself advancing in age.

“When one reaches the age where the man with the scythe is his constant companion, the idea of an afterlife has a lot more appeal than for a 20-year-old. So, the age-old questions are louder: Where do I come from? What am I doing here? And, where am I going? are relevant when one ages.”

The novel twists and turns with an unexpected murder trial, a troubled and explosive relationship with his own son and Daan’s own internal struggles. The writing is intellectually rewarding with overflowing intertextual references to the classics, the Bible, the law, and Asian and Afrikaner history. Reading the novel is an education in and of itself, allowing the reader to explore a foreign land and understand our own country better.

It might seem odd for a reader to have an Afrikaans book situated in China, but there is a reason for it. “I chose China because I spent quite some time there learning taiji.

“The practice of taiji assists one not only in attaining physical balance, because the movements are so slow, but also emotional balance because the slow movements and the concentration to perform them is a form of meditation.”

In the end, the message of the book is universal:

“Daan shook off his fundamentalist ideas, became a balanced person, accepted who he was and developed respect for his fellow human beings.”

Now, the book is being translated into English by South African author, translator and academic Michiel Heyns, and is available in Afrikaans on Amazon. DM/ML

Lodewyk du Plessis is a pseudonym.