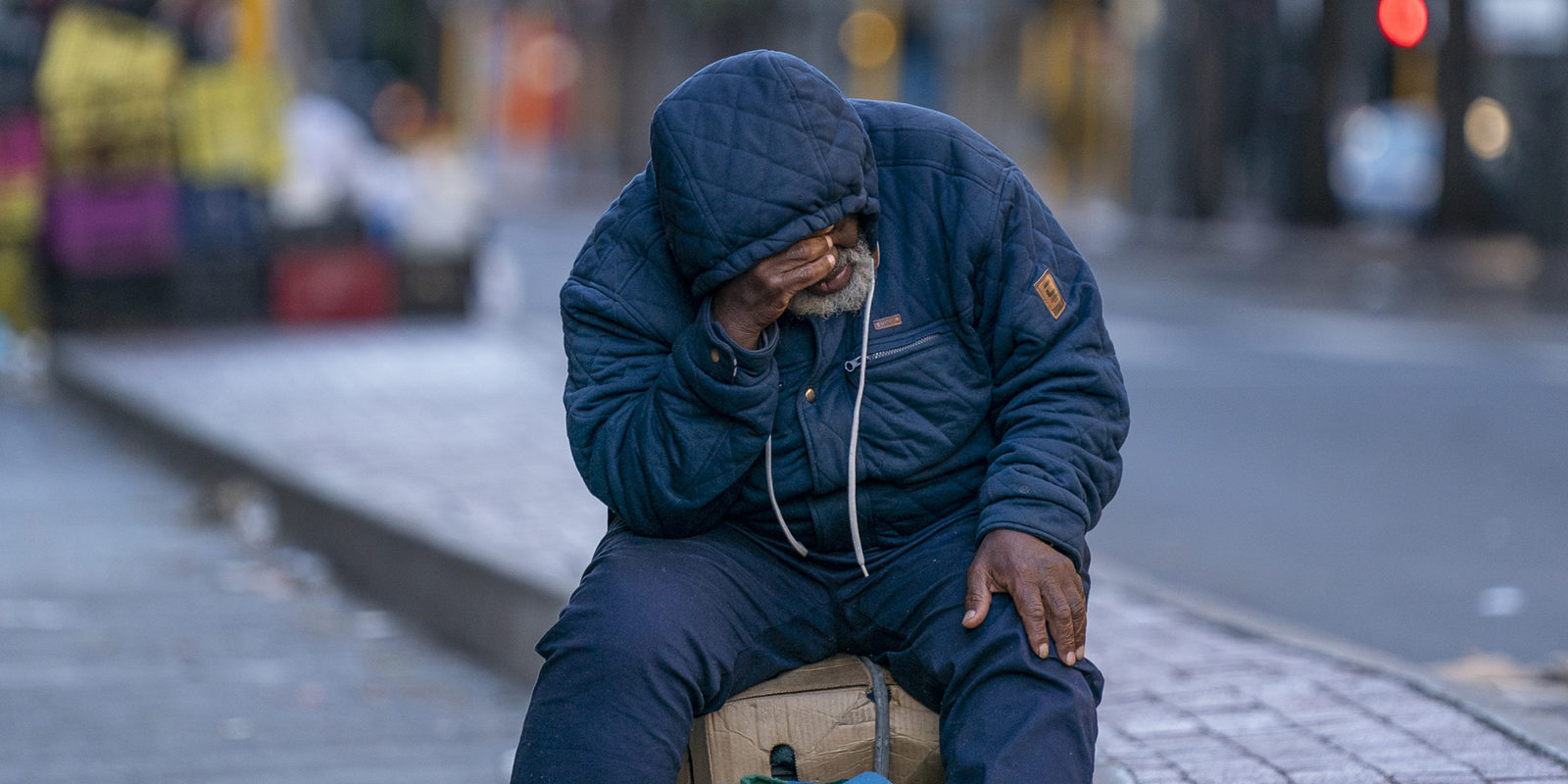 A homeless man sits with his belongings in Cape Town. South Africa should review all vagrancy laws and align them with the values enshrined in the Constitution and other regional and international human rights law, says the writer. (Photo: EPA-EFE / Nic Bothma)

In a watershed judgment, the African Court on Human and Peoples’ Rights has ruled that vague, outdated colonial-era laws, like those that outlaw being idle or disorderly, are a violation of human rights as embodied in the African Charter.

On Sunday, 19 March 2019, there was public outrage when a woman was arrested by Sea Point police officers while sitting on a public bench on the Sea Point Promenade, Cape Town, while waiting to attend a job interview at a nearby hotel. In video footage that was circulated on social media, police officers could be seen searching through Esethu Mcinjana’s handbag, while she complained of unnecessary harassment. She was kept in detention for one night.

On Friday 4 December 2020, the African Court on Human and Peoples’ Rights ruled for Mcinjana and hundreds of others. It offered an Advisory Opinion on the compatibility of the so-called vagrancy-related laws with the provisions of three human rights instruments that form the normative foundation upon which the African Union human rights system is based.

In its judgment, the court took specific note of South African bylaws such as those that prohibit a person without a fixed abode from so-called loitering in a public space. The origin of these laws can be traced to our colonial history when, as now, they were deployed as tools of political and social control.

In a judgment that is viewed by many as a watershed against vague, outdated colonial-era laws, such as those that outlaw being idle or disorderly, the court unanimously found that the application of these laws violates fundamental human rights and freedoms, as embodied in the African Charter. This ruling follows the African Commission on Human and Peoples Rights’ own Principles on the Decriminalisation of Petty Offences in Africa, which provide normative guidance to African states on why these laws are inconsistent with the free exercise of human rights, and adds authoritative voice that there is a positive obligation on African states to review their laws, including by repealing and amending them where necessary, to ensure they comply with human rights standards.

Section 39 of the South African Constitution requires courts, when interpreting any legislation, to promote the spirit, purport and objects of the Bill of Rights. Given the human rights concerns associated with the application of these vague laws, it is likely that their constitutionality can be successfully challenged. The African Court has given credence to this argument.

In South Africa, these laws can be found in provincial legislation and municipal bylaws such as those that supposedly prohibit begging or loitering, that can be interpreted as designed to criminalise the status of an individual, rather than specific conduct that satisfies all the known elements of an offence.

The criminalisation of this type of behaviour reinforces the view held by the African Commission on Human and Peoples’ Rights – and by practitioners in the field of crime and violence prevention – that these laws tend to aggravate the situation, rather than address the underlying conditions that instigate people to perform certain activities in public and prescribe the adoption of anti-poverty measures that are adequate and sustainable.

The approach recommended by the African Commission dovetails with the vision of the 2016 White Paper on Safety and Security, which recognises the significance of initiatives that are designed to reduce poverty, inequality and unemployment, within its broader approach of identifying and addressing the underlying causes of crime and violence. The vision of the White Paper is also shaped by the determination to realise the values enshrined in our Constitution and the Bill of Rights and the National Development Plan.

Importantly, it envisions municipalities as key role players in the delivery of its objectives and requires them to, inter alia, allocate budgets for strategy, plans, roles, programmes and interventions for safety, crime and violence prevention at local and district municipal levels; align resources, legislation and policy to the objectives of safety, crime and violence prevention outcomes; and ensure the alignment of key performance indicators in strategies, plans, norms and standards with the White Paper. If implemented strictly, this guidance can allow municipalities, as immediate providers of governmental services, to act as catalysts for change and the introduction of measures that are directed at addressing the causes and underlying factors that compel people to occupy public places and perform certain activities in the open.

Regrettably, the outbreak of Covid-19, and the concomitant need to implement public health and safety measures, has further exposed existing faultlines and fragilities in our deeply stratified society and exacerbated the daily hardships and challenges faced by the poor and historically marginalised who, by virtue of their social and economic conditions, are unable to effectively implement these protective measures.

As we move forward and continue the process of building back, we need to prioritise long-term, developmental solutions that are shaped both by the transformative intention of our Constitution – and existing commitments to address historical injustices – and resolution 449 of the African Commission on Human and Peoples’ Rights as a central pillar of a successful response to Covid-19 and recovery from its sociopolitical impact, which makes clear recommendations to African states on how a human rights-centred approach provides the best framework for any effective recovery from the pandemic.

In the meantime, South Africa should conduct a comprehensive review of all existing laws that can be classified as vagrancy laws and see to it that they are aligned with the values enshrined in our Constitution and other regional and international human rights law. This may, invariably, entail the repeal and replacement of some laws that do not satisfy the minimum standards of respect for non-derogable human rights and dignity. DM

Now is the right time for the Proteas women team to bloom on Indian soil, says coach Moreeng