Raunchy Rendition: A space for people to tell sex stories safely and loudly 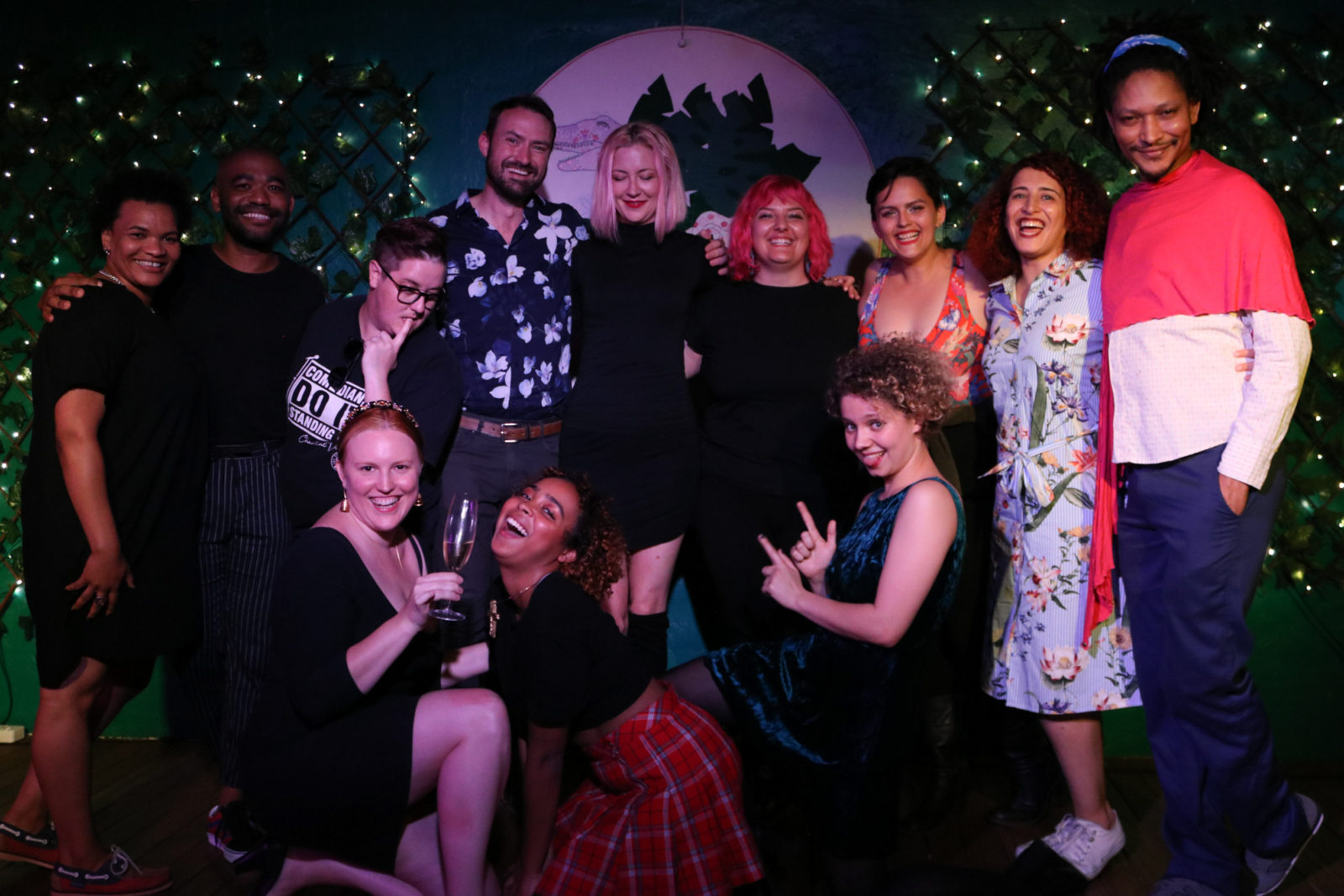 A group shot of all the storytellers, October 2019 (Image supplied)

Inspired by ‘The Moth,’ a storytelling platform that started out twenty years ago in Georgia, in the US, Raunchy Rendition's aim is to create a sex-positive community.

The audience is already enthralled by the time Wilma takes to the stage in a blaze of wit and charisma.

“I’d like to thank my Lord and Saviour,” he says, “And Beyonce Knowles. Also, a shout-out to our lesbian friends here tonight, because I don’t know why us gays can’t get on with you.”

The audience is on the edge of their seats, sucked into Wilma’s magnetic field. Wilma tells us a story about going to a music festival in Paarl.

“I was enjoying the festival when a man showed me eyes,” he says. The attraction was instantaneous. Wilma knew there was potential for things to head in a direction.

Wilma leans towards us and says, ‘The man was from the rough elements. But it didn’t matter. The sexual energy coming off of him could scorch the earth.”

After more lingering glances, Wilma and the man headed to a tree at the edge of the festival. Fuelled by desire, the man made fast moves, but they were in sight of everyone. Wilma decided they needed somewhere more private.

They walked away from the crowds, in search of a love nest.

“We found some long reeds – like where the baby Moses was laid out in the water before being sent on his way. Like that. I got myself ready,’ and thought, ‘Whatever.’”

To enhance the sense of romance, Wilma took off the shawl draped around his shoulders and spread it out in the reeds.

“The nice thing about the man was that even though he had been at the festival all day, he was clean. And I thought to myself, God is good.”

Things moved rapidly from there.

“There was a bit of a problem. At first, it was difficult for him to, er, get in. We needed lube, which we didn’t have. But luckily I had some lip balm, which did the trick. It was so beautiful. Those reeds. They vibrated and moved with the force of everything. God is good. Afterwards, my friends teased me about my little adventure. But, it was the best walk of shame I ever did.”

Wilma’s story is part of the Raunchy Renditions story-telling initiative, the brainchild of Sophie Joans, Kelly Smith and Esti Strydom, collectively known as The Cream Team. It is inspired by The Moth, a storytelling platform that started out twenty years ago in Georgia. The is to create a space for people to tell stories, based on their lived reality, to a predetermined theme. The stories are pitched to a selection team and those that are chosen are given the opportunity to come up on stage and tell their story in five minutes.

Storytelling is a powerful conduit for processing our experiences, as narrative can provide agency. Stories open up our perspectives to the experiences of others and our sense of community is strengthened when we share stories with each other. Raunchy Renditions always has sex stories as a theme, its aim is to create a sex-positive community. The stories are shared in a safe, supportive space where people can listen and be heard. Joans initially had the idea of creating the platform and approached Smith and Strydom to help breathe life into the idea.

In fact, it’s become so big that they sell out at every show. They’re rapidly growing a fan base of people who keep coming back. The Raunchy Renditions community keeps growing. There’s a magic that exists between the Cream Team. Each of them brings skills that ignite their joint purpose. Joans holds the vision. Smith has solid experience in hosting shows. Strydom has the design eye.

The thing about Raunchy Renditions is that you will laugh. The stories will have you laughing so much, it will hurt. Like the couple who met at a bar in South Korea and ended up having such mind-blowing sex in a pre-fabricated bathroom that they broke the wall, fell over, and landed on the floor in full view of an amused audience. Or the story about the two women who, on the back seat of an Uber, started getting fresh. One of them had been drinking from a bottle. She decided to get creative and use it to pleasure her partner. Which worked. Incredibly well. All this, while the Uber driver stared ahead, focusing on the road.

But, there’s also something deeply political about how Raunchy Renditions shapes perspectives that are not framed in a cis-gender, heteronormative way. The show normalises the stories of LGBTIQ+ persons, stepping outside of gender binaries and narrow definitions of sexual orientation. It’s educational in a way that reaches out and touches us. There are coming out stories, stories of grappling with sexual orientation, stories about the challenges of heteronormative men wanting to impress with good “quality” dick pics. The stories are deeply moving, sometimes heart-breaking. They teach us something about the diverse world we live in. In sharing an intimate story, the storyteller is rendered vulnerable. This is the magic that connects them to the audience.

“South Africa is still such a conservative society. We are not particularly open to things of a sexual nature. So it’s really good to be part of growing a sex-positive community,” says Smith.

The Cream Team carefully curates the space for the sharing of stories. The stories are screened for alignment with their values. They make sure that each line-up includes a diverse range of storytellers. Intersectionality is important – reaching across race and gender divides, stretching across different age groups and sexual orientations. Not only does Raunchy Renditions break down barriers in terms of bringing together a diverse group of people, it also opens up the possibility for talking about “that which shall not be named.” It is a portal for opening up and talking about the “taboo,” and the “deviant.”

If you’re keen to give Raunchy Renditions a go, but are too shy to share your story onstage, don’t worry. The Cream Team has got you covered. Each Raunchy Renditions show has a ‘Confession Jar.’ The audience gets a piece of paper and can share a sex confession story, which they put into the jar. Joans, Smith and Strydom choose the three best ones, which receive a prize.

Strydom says, “We’ve just done our seventh show now and it’s so funny when we look through the stories in the jar. The things that people think are so out there is just so normal now.”

Joans laughs, adding, “It’s always written up like a big reveal, ending with – And then…… I threw up on his penis.”

So rest assured – whatever it is that you are doing under the cover of darkness, thinking that your Aunty Mavis was right about you – you were always going to be an oddball, don’t worry. There are many more people like you out there.

I ask the Cream Team to tell me a confession that stands out. They can’t. They tell me so many, I have to focus on not falling off my chair. My favourite is the one about figging. For the uninitiated, figging is the art of sticking a skinned piece of ginger root up your anus or vagina for the burning sensation it elicits. Like, think about putting raw onion in your eye. Like that, but worse.

Smith explains, “This woman and her partner ended up shaping a piece of ginger into a butt plug so that she could put it in her butt. So they did that, but obviously, ginger being ginger, it ended up being very painful and the romance ended very quickly after. But at the time, it felt like a good idea.”

And this is the great thing about Raunchy Renditions – we learn skills we didn’t know existed. But, there’s more. The Cream Team tells me that there’s also potential to meet and hook up at a show. A couple wrote to tell them about how they met at a show. I think back to my first induction to Raunchy Renditions in 2019. During the interval, I went to get a drink at the bar. It was crowded and people were pushing up against each other, eager to get their order in. I was waiting to be served when a couple started chatting to me. They asked if I knew about a swinging party that took place in the city. I told them no, I’d never heard of it.

“It’s by invitation only,” said the woman.

“And the cool thing about it is that only the women can approach and initiate,” said the man.

The researcher in me wanted to know more. So I asked questions.

“Let me know if you want to join,” said the woman. She winked and walked away, sipping on her gin and tonic.

I stood at the bar, wondering if I had just been hit on. I had no idea. But it felt glorious. DM/ ML