Turning Joburg’s inner city into a network of walkable routes 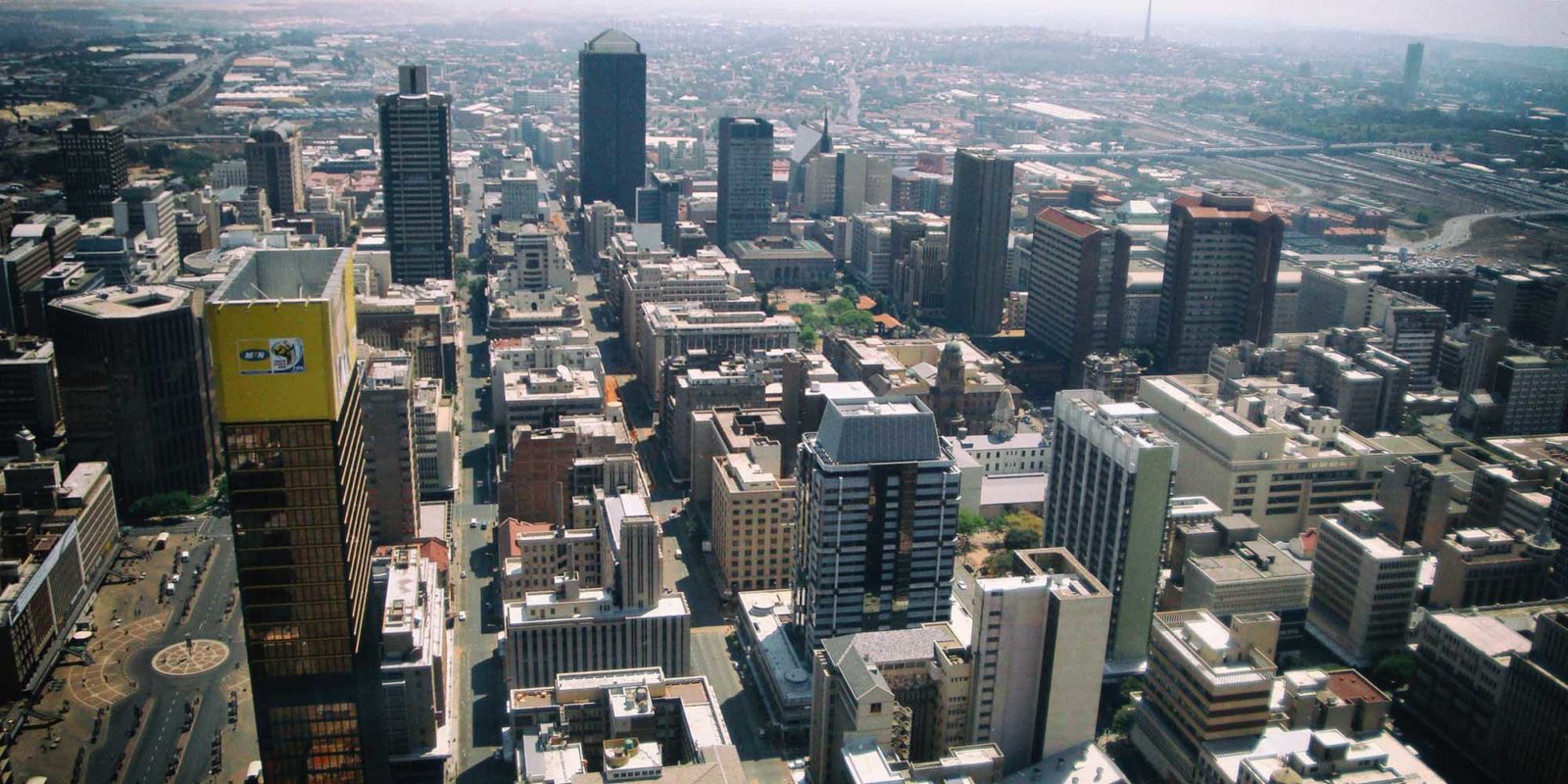 The inner city was historically and remains the core economic and business node within Johannesburg, and is complemented by satellite nodes throughout the municipality. (Photo: Flickr / Spyro2008)

Johannesburg’s new inner-city Walkable Network targets streets and public spaces to create a safe, clean and welcoming experience, and is part of the regeneration of the CBD.

The City of Johannesburg is the largest of South Africa’s six metropolitan municipalities. It is one of the fastest-growing urban areas globally and is the epicentre of the national and the subcontinent’s economy. As such, it is consistently the destination of choice for both skilled and unskilled workers from beyond the borders of the province and the country.

The inner city was historically and remains the core economic and business node within Johannesburg, and is complemented by satellite nodes throughout the municipality. It is a city of stark contrasts, and despite the prevalent decline, the potential exists for regeneration, creating an environment for enterprises both large and small, and indeed livelihoods, to flourish.

The role of the Johannesburg Inner-City Partnership (JICP) has always been to find partners and collaborate on projects for the benefit of inner-city regeneration. The aim is to create an inner city that is safe, clean and welcoming for all stakeholders. By creating a Walkable Network in the inner city, the JICP endeavours to address issues of crime, grime, placemaking, accessibility and economic development.

The intention of the Walkable Network is to create a partnership-based package of interventions that target streets and public spaces to create a safe, clean and welcoming experience in line with the JICP objectives.

This will include projects that improve the walkability of the streets and other public places through various forms of placemaking, such as pedestrianisation, public art, street furniture, lighting, landscaping, signage, safety and cleanliness interventions along the network through partnerships with public, private and civil society stakeholders from the property, design, security, waste management, academic, food production and other sectors.

Two stakeholder workshops were held in March and July 2020 to select the streets that form the Network. The workshops were attended by representatives from CoJ, inner-city property owners, CIDs, SOEs, universities and civil society.

The City of Joburg has incorporated the Walkable Network as one of the key non-motorised transport (NMT) projects in the Inner-City Transport Master Plan that is still being finalised.

In order to plot which streets make up the Walkable Network, the following criteria were taken into consideration:

Having agreed on the overall Walkable Network, a pilot route was selected by stakeholders to initiate the project, covering Main and Fox streets (East/West) and Joubert and Rissik streets (North/South). 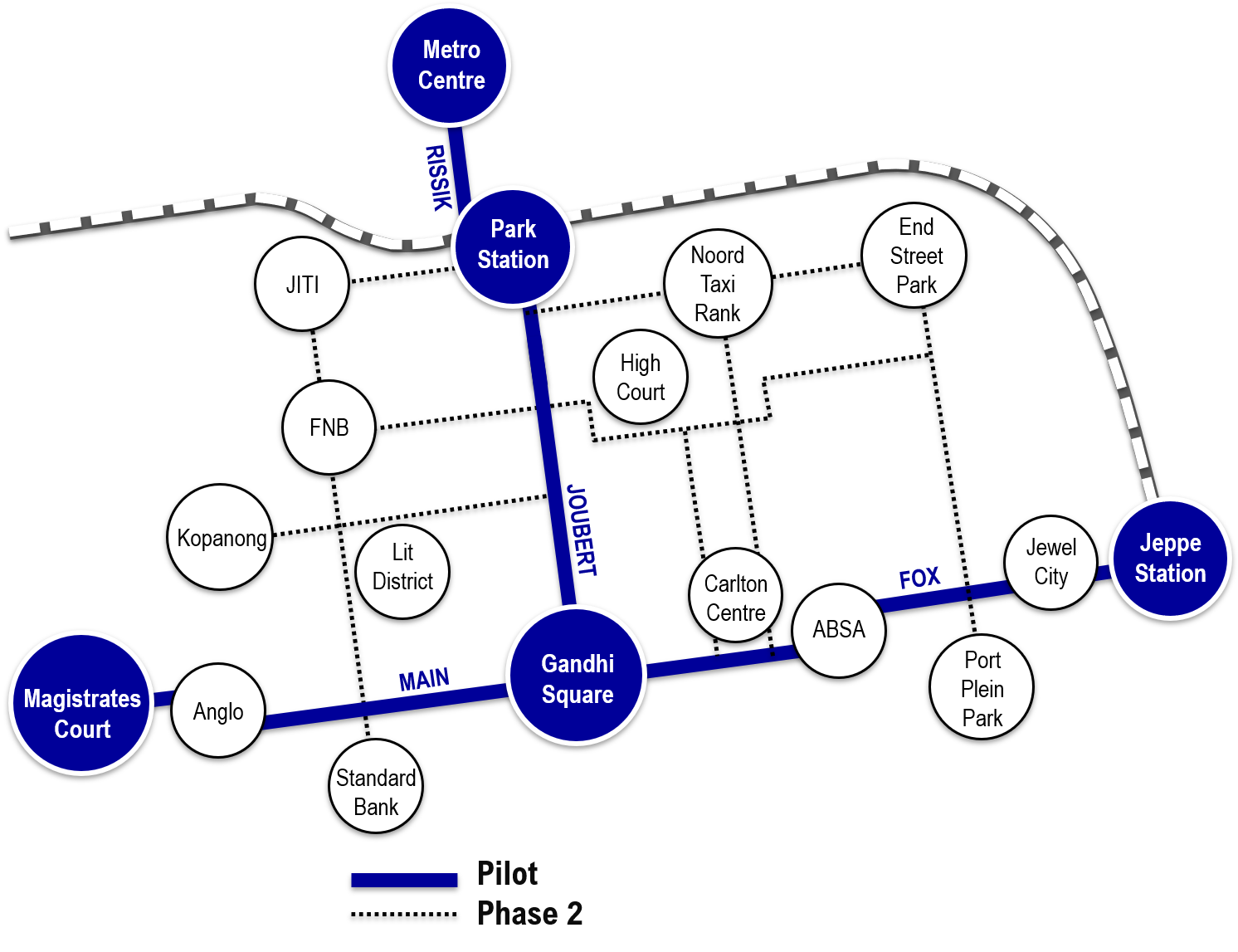 The pilot east-west route connects the magistrates’ court in the west across to Jeppe Station in the east. Gandhi Square acts as the midtown knuckle, intersecting with the north-south route to Park Station, and onwards to the Metro Centre. The pilot route was prioritised specifically because there are a significant number of existing urban management initiatives across the route with existing, and potential for, ground-floor activations. The pilot route already has a strong pedestrian presence, with some pedestrian-focused projects under way, including the Johannesburg International Transport Interchange (JITI), the high court precinct, the Literary District and Main Street pedestrianisation.

Once the pilot has been implemented, Phase 2 will introduce additional routes between various key destinations within the inner city, further improving walkability.

A working group is being established to coordinate stakeholder engagement throughout the pilot. Three task teams will assist the working group with the following specific areas of intervention;

Some of the projects identified will not require funding or approvals from authorities and can be implemented immediately such as the cleaning of streets and other public spaces, temporarily widening walkways, the introduction of parklets in select parking spaces, along with the pilot.

In cases where projects require funding or approvals, this will be rolled out over longer periods to allow for government approval processes and the sourcing of funding on a project-by-project basis from the public, private and civil society sectors. DM

David van Niekerk is CEO of the Johannesburg Inner-City Partnership.