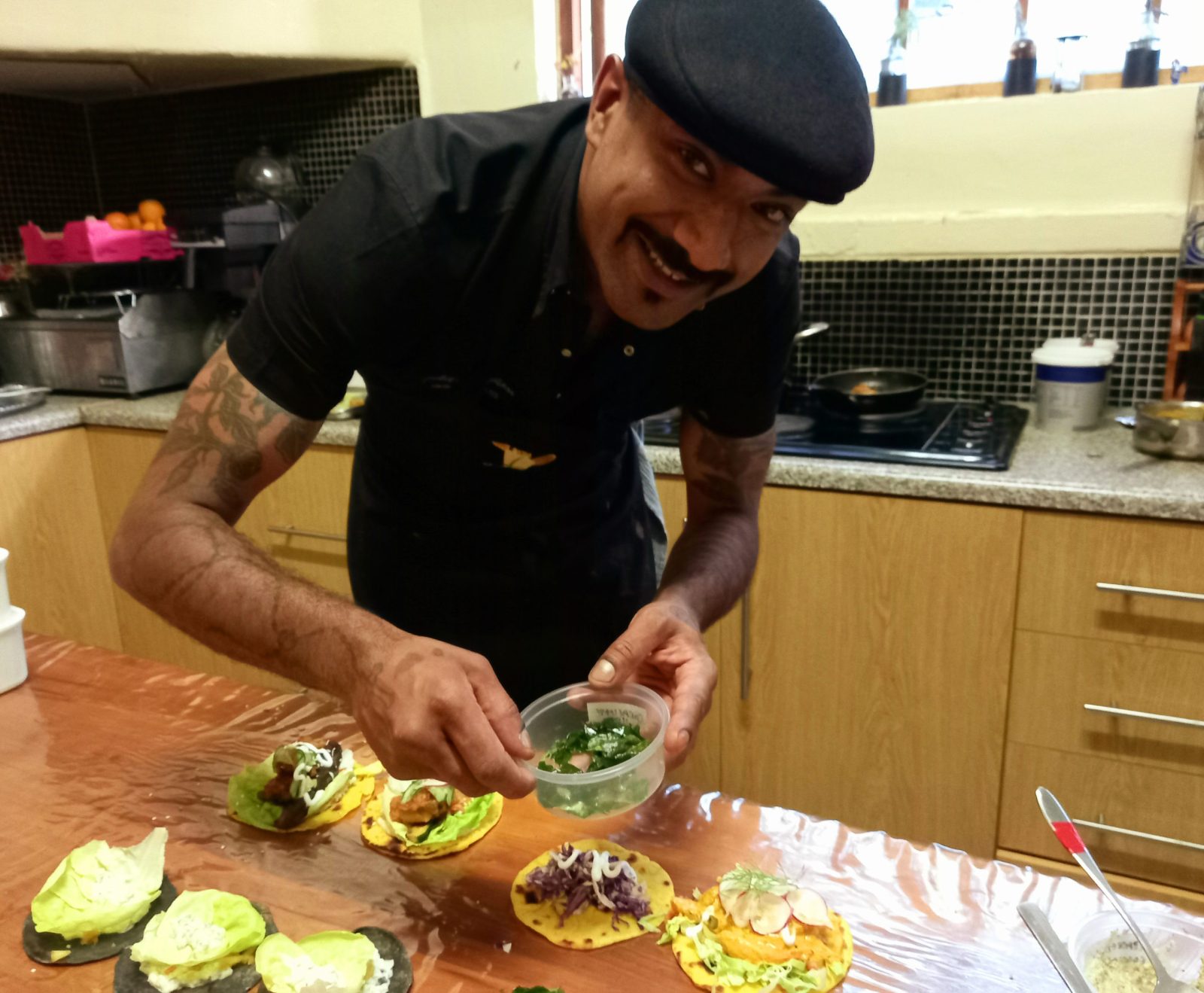 Retrenchment is rarely a reason to celebrate, but four Cape hotel chefs have channelled their culinary skills in new directions in their neighbourhoods.

When four of the Mount Nelson Hotel’s five senior chefs were retrenched in August 2020, they repackaged their skills in individual ventures from the City Bowl and Claremont to Table View and Strandfontein.

The landmark Cape Town hotel reopened its food and beverage offerings this week, operating with a reduced staff component. Business Insider South Africa had reported in August that with few overseas guests, the Mount Nelson Hotel would likely retrench more than half its 251 staff. It quoted a hotel letter, dated June 29, stating that a formal retrenchment process to let go of 154 employees was under consideration.

Before the axe fell in August, says Dion Vengatass, “Sven (Adams) was production, Llew (Llewellyn Hurter) was breakfast and lunch, Craig (Hibbert) was pastry, while I was chef du cuisine in the main kitchen.” The four worked closely with executive chef Rudi Liebenberg.

Since they found themselves out on a limb in August, the four have all started small food businesses. Vengatass launched Violet by Vengatass at Mountain Manor Guest House in the City Bowl, and does private chef gigs. Sven Adams started his Svinx Products braai sauce range in Strandfontein, while Llewellyn Hurter turned his hand to marketing frozen chilli poppers from his home in Table View, under the Zoe’s Kitchen brand. And Craig Hibbert now runs Craig’s Cakes, out of his Claremont home.

In Cape Town’s City Bowl, Dion Vengatass assembles tacos to order in the Mountain Manor Guest House kitchen, its owner supplying drinks to those collecting takeaways. Some stay for a sundowner, or eat dinner on the enclosed terrace. “Everything I make myself, from the palak paneer cheese, to chaat masala, sweet carrot achar and lemon achar. The pickles come from offcuts and trimmings so I don’t waste. I’m not selling these yet, but eventually I would like to,” says Vengatass.

Vengatass buys some spices from Atlas Trading Company and mixes blended Durban spices into his own masalas with “out-there flavours that make you tingle”. He says it’s been educational: “I can make sushi to ramen to Yorkshire pudding to Beef Wellington. I only started exploring proper Indian food when I started this. I only knew Durban Indian food, with no clue about the traditional stuff from India. So this has been such an adventure discovering new recipes.”

Violet by Vengatass has a steady neighbourhood following, but without the boost of alcohol sales, margins on food are slim. He is supplementing his income with private cheffing gigs.

“Home is originally Benoni, so I’ll try this for six months, then if I can carry on, I’ll stay in Cape Town. If it doesn’t work out, I’ll have to buy a food truck and trailer and move to where I can operate with less expenses,” he says. Vengatass might develop a range of freezer-friendly dahls and sauces too down the line.

“Violet by Vengatass has only been good feedback, touch wood. Durban Indians are eating my food. The reviews of my tacos have been numero uno because they are different,” says Vengatass of the response. “It takes three-and-a-half hours to roll out 180 taco shells. They’re rustic and handmade, and that passion is transferred to the food. Even if I have only one veg thali order to sell on a Friday, they’re tasting my passion. That makes me get up in the morning.”

“Svinx is a nickname I got when I joined the kitchen at the Peninsula Hotel. A good friend said I looked like the Sphinx in Egypt. And the name just stuck,” he explains. “I’ve got about 12 different chilli plants at home because I love chillies and eating strong food. So I harvested at the end of May. I made a smoked chilli sauce, and gave it to friends. This is a winner, they said.”

Adams’ Friday food deliveries are designed to promote his chilli sauces. So with crispy fried winglets, brisket sliders or chicken tikka croquettes, there is a condiment on the side. Adams has roped in family members to help with social media and deliveries, using the hashtag #proudlystrandfontein.

“I’m in Strandfontein so it’s just to push my area and my work. It’s a middle-class community close to Muizenberg. Quite a few locals are supporting me since I started doing the Friday meals, although I’ll deliver elsewhere too.”

Adams says the sauces are keeping him busy, and the end goal is to have products placed in markets, delis and Spar. But long-term he’s still looking out for a cheffing job. “Hotels are where my skills lie; this is more of a side hustle.”

Adams recently put his products to the test for members of the Helderberg Chilli Club. The smoked chilli sauce was a hit. But if chilli heat is what you’re after, he rates his Habanero Passion “at about an eight” on the chilli scale.

Over in Table View, when Llewellyn Hurter struggled to find frozen chilli poppers, he decided to start producing and selling them from his home during lockdown, circulating the news on local community Facebook pages. Frozen packs of 12 poppers were quickly snapped up.

Zoe’s Kitchen is named after his young daughter, who is delighted to have her dad working from home in “Llew’s Inferno” (his pet name for his home kitchen), instead of slogging long hours in the bowels of a hotel. Previously, Hurter looked after poolside buffet breakfasts at the Nellie’s Oasis restaurant.

Crammed with cheesy, gooey goodness, Hurter describes his chilli poppers as “handmade with the sort of care and love that only comes from someone who has done a fair share of bar hopping”. Frozen and ready for deep-frying, air-frying or baking, the green jalapenos are salted and pickled before being stuffed with Cheddar, mozzarella and cream cheese, then double-crumbed.

“The first weekend I sold out. It was payday and I made two and a half grand. So I thought: let me start making them,” he says, joking that his typical customer is a party animal. Another anecdote is about the Diwali festival in November 2020. “I had so many Indian people buying from me … guys were pulling in driving BMWs and Maseratis. It’s been a great hit.”

It’s particularly impressive because the Zoe’s Kitchen brand doesn’t even have its own Facebook page, so much of its success is due to repeat business and word of mouth in the greater Blouberg area. Currently there is only one type of popper available, but since he’s had requests for vegan poppers, Hurter is working on a vegan option.

“I didn’t want to do the whole cooked meals delivery thing. And it just took off,” says Hurter. “You work for a hotel or food business and cook for their name. But when you do it for yourself, it feels so much more gratifying.”

Former Mount Nelson executive pastry chef Craig Hibbert has made wedding and birthday cakes as a sideline for a few years. The creativity involved in the pastry section appealed to this trained graphic designer, after he left an advertising agency to work in kitchens instead.

“I’ve always had a few regulars. But it’s never really been a cake business; it’s more of a hobby and a bit of extra cash from kiddies or celebration cakes,” says Hibbert of his private cake orders.

Once retrenched from the Mount Nelson, Hibbert stepped up his social media presence during lockdown. In Level 3, he sometimes had two or three cake orders a week, but that soon died down. Having no wedding cake orders didn’t help, but occasional orders came in for sweetie tables, and afternoon tea deliveries.

Typical flavours include carrot cake or red velvet with cream cheese icing. “But a three-tier chocolate and salted caramel cake is pretty much the one everyone chooses,” says Hibbert. “I put caramel popcorn on top. It’s my most popular.”

It appears that cakes will remain a sideline gig for Hibbert. He was delighted to be hired full time as pastry chef at The Vineyard hotel in Newlands. He started in December 2020. DM/TGIFood