Reimagining health in the Eastern Cape: As budgets shrink, it is more important than ever to strengthen primary healthcare 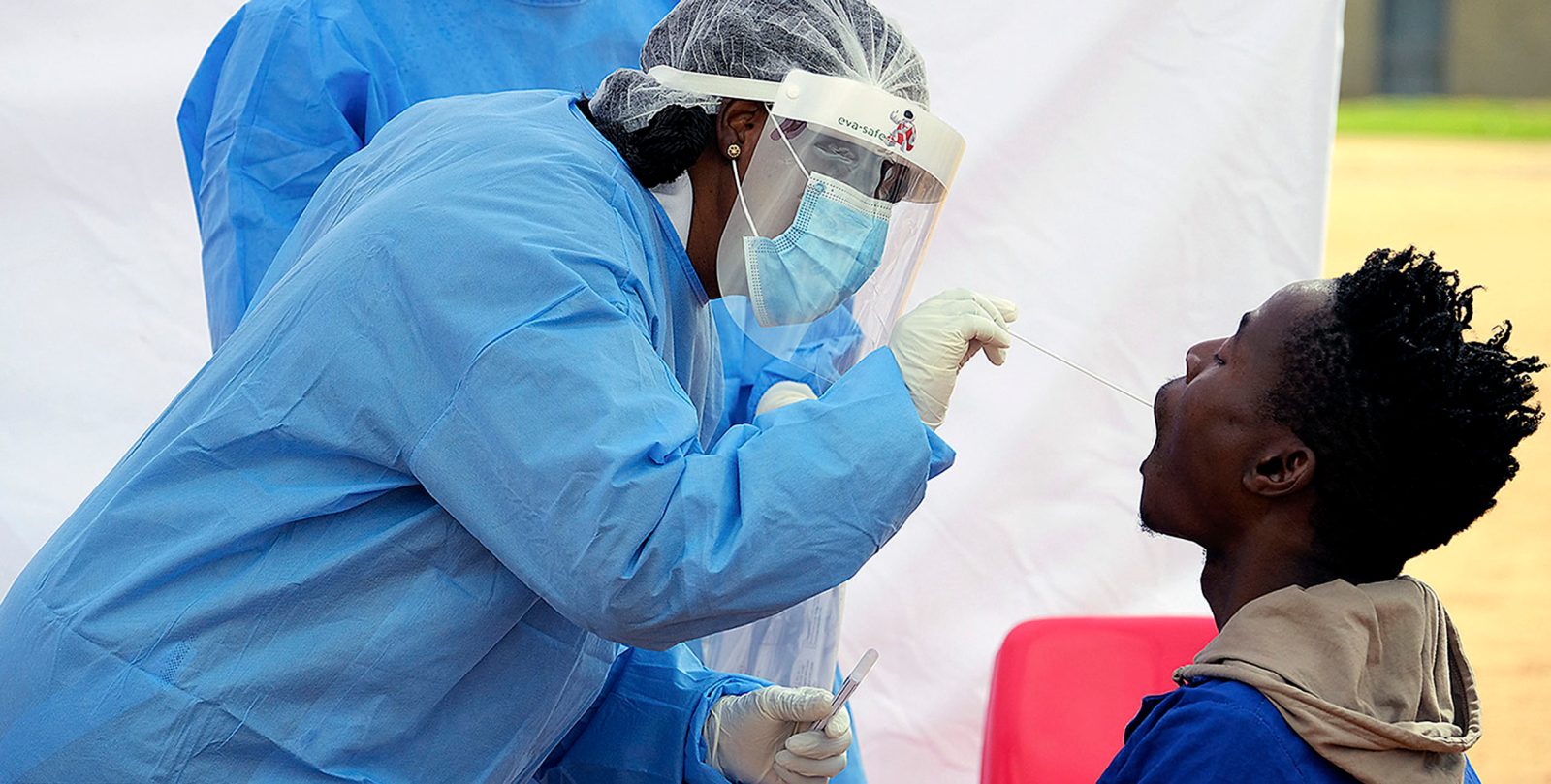 It is useful to recall how provincial budgets are determined and consider what they need to prioritise. (Photo: Dino Lloyd / Gallo Images via Getty Images)

As the final 2021 budget negotiations unfold, the government of the Eastern Cape and its health department, in particular, are being asked to do more with less, when gaps in primary healthcare need to be filled urgently.

Before we explore what this means for socioeconomic rights and entitlements, particularly regarding health, it is useful to recall how provincial budgets are determined and consider what they need to prioritise.

The provincial equitable share is based on a largely population-based formula. Section 214(2) of the Constitution states that the formula must take into account:

The current formula is weighted as follows:

The health share is derived from two components. On the one side there is the risk-adjusted portion (75%), the largest of which is determined by using the mid-year population estimates, as well as the percentage of the population not covered by medical schemes. The second input is informed by healthcare use in primary healthcare clinics (5%) and hospitals (20%). These budgets are augmented by several conditional grants, which add 15% to equitable share allocations.

The October 2020 MTBPS reduced the overall pot of money distributed through the equitable share, forcing provincial governments to cut spending. At this crucial moment in the middle of a pandemic, it is therefore up to provinces to provide the resources to fight Covid-19 while dealing with many other health challenges – from HIV and tuberculosis (TB) to diabetes – and ensuring schools have the resources to continue to function and provincial social services for the most vulnerable are not undermined. All this must be done within a shrinking budget.

The MTBPS undoubtedly weakened the ability of the provincial government to perform these crucial functions now and in the medium term.

Meeting the health needs of the population

Covid-19 is teaching us that investments in strong community health systems allow for adaptive and timely responses to outbreaks. Our collective failure in addressing the long-standing HIV and TB epidemics has weakened our ability to respond to the Covid-19 crisis.

In 2019, the Multi-Drug Resistant TB Policy Framework estimated that 30% of people with TB are not receiving treatment, despite TB being the leading cause of death in South Africa.

There has also been increased prevalence of diabetes and hypertension, according to the Health Systems Trust’s District Health Barometer. People with these conditions are at significantly increased risk should they get Covid-19.

More routine primary healthcare services, such as immunisations and sexual and reproductive health, are also in decline. Given the large percentage of the population under five years, poor immunisation coverage is particularly concerning as the province continues to struggle to meet the national target of 80%.

Surprisingly, even before the pandemic, service delivery data suggested that the demand for health services was decreasing, with provincial data indicating a sharp decline in the use of primary healthcare services. Meanwhile, the province’s 66 district hospitals continue to balance their important role as first-referral hospitals with delivering primary healthcare, as illustrated by outpatient data, which show that more than 65% of outpatients access services without a referral.

During the special adjustment budget tabled in 2020, an additional R1.7-billion was allocated to the Eastern Cape’s health department, but this decreased by R688-million in the budget delivered on 26 November. The adjusted allocation is R27-billion, which does not meet the sector’s needs.

Healthcare is people driven, and each level of care requires a different mix of workers. While recognising the significant drop in the provincial equitable share, the measures proposed by the provincial treasury are likely to reduce the morale of the 40,000-strong health workforce and have dire consequences for patients. In June 2020, there were many preventable maternal deaths due to a lack of staff at Dora Nginza Hospital. Medical and community service officer posts remain vacant, and there is a lack of general workers at key facilities.

The human resources proposals from the provincial treasury go not only against public health rationale, but they are also not aligned with the statements by the health minister on 23 November 2020 following his visit to the Nelson Mandela Bay Metro. Zweli Mkhize said staff shortages were a key factor in the province’s poor health outcomes. The overflow of patients waiting in observation wards due to a chronic shortage of porters, cleaners and general workers was a major problem. He said urgent interventions are needed to fast-track the filling of posts. Despite these being introduced through regulations during the early days of the epidemic, it is unclear whether they were effectively implemented in the Eastern Cape.

The new proposals by the Eastern Cape treasury cannot fulfil these urgent needs and they impede the appointment process for essential posts. Measures should be introduced urgently to not just respond to the short-term crisis, but to systemically and fundamentally fix the HR system. Organograms should be re-evaluated and health facilities given the capacity to respond to the public health demand during and after Covid-19. This would also ease the escalating psychosocial strain on health workers.

The minister referred to many well-known challenges facing the province, such as historical underfunding and infrastructural inadequacies. These and functional inadequacies are precisely why the Eastern Cape Department of Health needs more budgetary resources and imaginative interventions if it is to emerge from this crisis.

The challenges are immense and will probably extend way beyond the Covid-19 crisis. While the importance of the pandemic response is crucial, there is an urgent need to address the longer-term decline in the quality of healthcare services. Instead of blunt cost-cutting measures, the budget should be prioritised around the delivery of comprehensive basic services, which the province is constitutionally mandated to deliver.

The government can help through strategic procurement and contracting services: it is active in the provincial economy, procuring a wide range of services, from large construction projects to security. If well managed, budgets can also support much-needed local economic development, including jobs.

However, the measures presented in the budget, particularly the focus on villages, towns and the township economy without a clear framework that links these contracts with improvements in service delivery, may be premature. When a similar strategy was employed in North West, rather than catalysing local economic development, more often than not it resulted in the enrichment of politically connected individuals. Besides, measures to support small business have already been promulgated at a national level, so duplicating them appears ill-timed. Instead, maximum available resources should be pushed towards protecting frontline services.

As the final 2021 budget negotiations unfold, the government of the Eastern Cape and the health department in particular are being asked to do more with less. It is now more urgent than ever to strengthen public primary healthcare. The strategic deployment of trained community healthcare workers can improve links between levels of care. Increasing the province’s intake of community service health professionals can free up more experienced nursing assistants to lead ward-based outreach teams. Yet National Treasury is taking aim at the wage bill in particular for cuts.

Improved links to care can reduce the burden on hospital outpatient departments. This will require investment in district management structures to ensure there is effective management of people and health information, which could significantly improve health system responsiveness and improve health outcomes in the province. DM/MC

Ektaa Deochand is an attorney in Section27’s health rights programme. Russell Rensburg is the Executive Director of the Rural Health Advocacy Programme and Daniel McLaren is a budget analyst at Section27.

This article is part of Spotlight’s “Reimagining health in the Eastern Cape” series, in which activists, healthcare workers, policymakers and others are asked to reflect on how access to healthcare in the province can be improved.