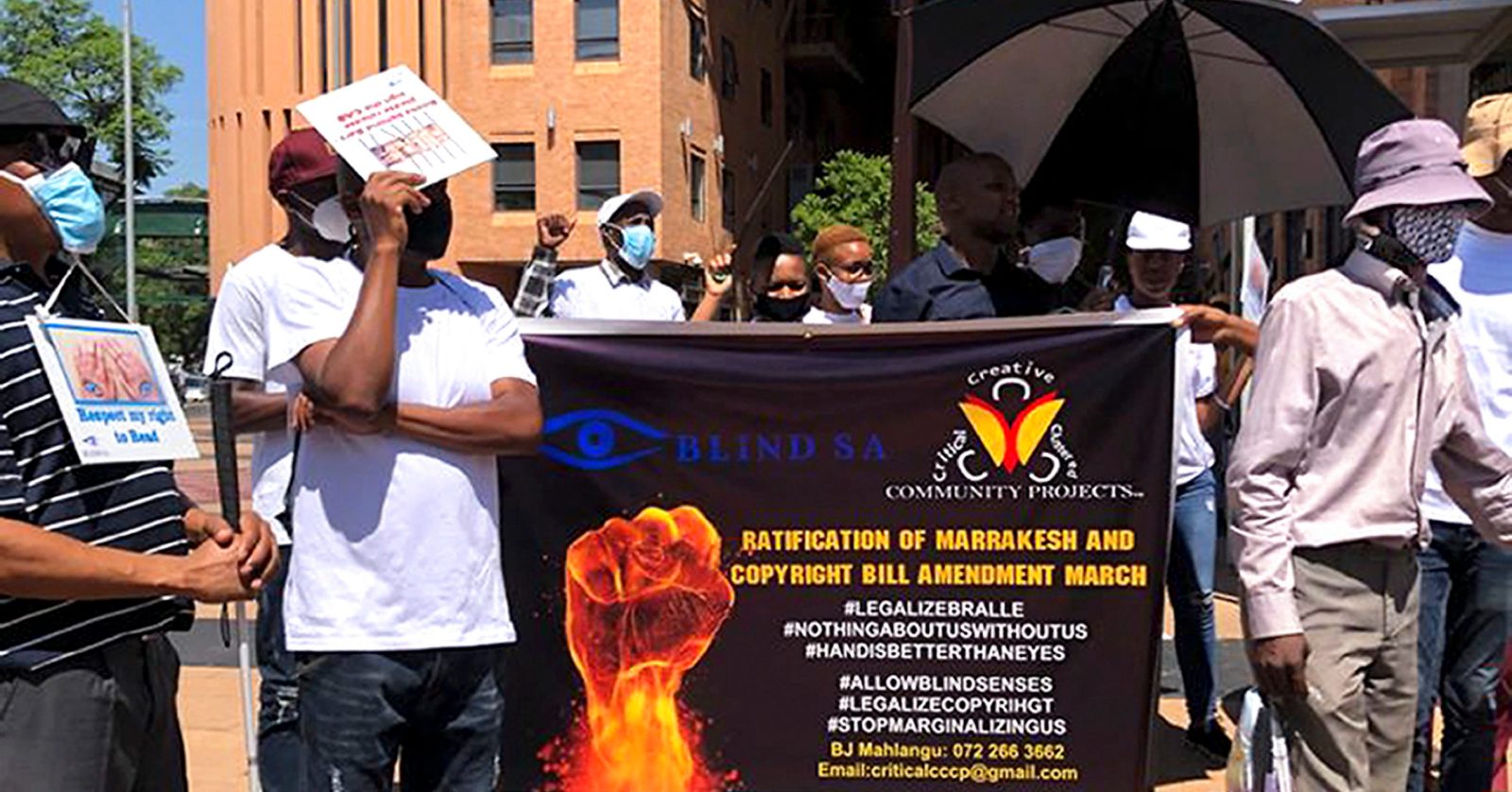 Activists participating in the UN Human Rights Day protest march in Pretoria on 10 December 2020 from the offices of the Department of Trade, Industry and Competition to the Union Buildings. (Photo: Philile Ntombela)

Access to information activists took to the streets on Thursday, 10 December to demand that the long-awaited for Copyright Amendment Bill be signed into law by President Cyril Ramaphosa.

Activists participating in a UN Human Rights Day protest made up a broad coalition of disability rights organisations, education unions and creatives. They marched from the offices of the Department of Trade and Industry in Pretoria – custodians of the Copyright Amendment Bill (CAB) – to the Union Buildings to hand over a memorandum which details their demands for fair copyright legislation.

The bill and the linked Performers’ Protection Amendment Bill (PPAB) had both been passed by the National Assembly and were sent to the president in March 2019 to be signed into law.

However, the process was stalled when in a letter dated 16 June 2020, Ramaphosa referred the CAB and PPAB back to Parliament for further consideration, suggesting that the bills may not “pass constitutional muster and may therefore be vulnerable to constitutional challenge.”

Since then, the bills have been deliberated on by MPs, but have now been delayed again until 2021. Activists are running out of patience and demanding that a decision on the bills is made without further delay.

Blind and visually impaired activists argue that the delay in signing the bills into law maintains discrimination against people who live with disabilities because they first have to get copyright permissions in order to convert reading materials into accessible formats, such as Braille, among others.

In addition, the consequence of the president not signing the CAD is that it delays the ratification of the Marrakesh Treaty. The United Nations-administered Marrakesh treaty was adopted in 2013 and allows organisations that serve the visually impaired to share copies of accessible materials made under exceptions in a signatory country with organisations that serve the visually impaired in another signatory country. South Africa cannot have access to hundreds of thousands of books that have already been converted to formats that visually impaired people can use in other countries until it signs the treaty.

Meanwhile, actors who participated in the march argued that earning royalties would have provided an income to actors left stranded by the Covid-19 public health emergency. The Performers’ Protection Amendment Bill amends the outdated Performers Protection Act, 1967, which did not provide for among others, economic and moral rights for actors.

The PPAB cannot be passed without the associated CAB since there are certain clauses in the former that are intrinsically linked to the CAB. DM/MC