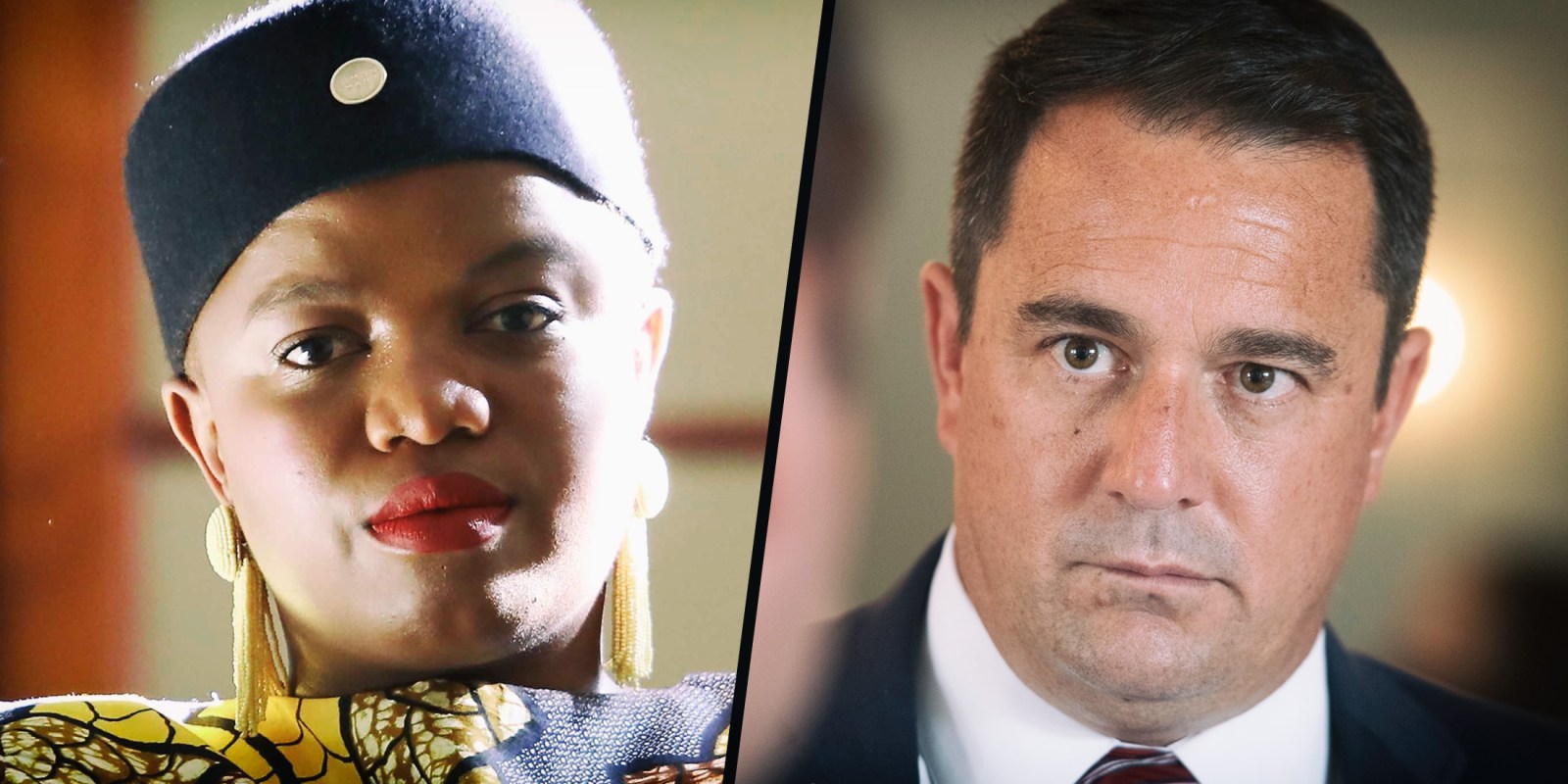 DA leader John Steenhuisen has placed MP Phumzile van Damme on an ‘enforced sabbatical’ – and shuffled her out of his shadow cabinet. DA leadership says it’s all about concern for her health. Van Damme supporters suspect a more personal motive.

“I don’t want to hear his smarmy voice.”

With these eight words, MP Phumzile van Damme may have temporarily torpedoed her career within the DA.

Van Damme’s comment was directed at party leader John Steenhuisen – and was made during a Zoom meeting at the beginning of lockdown, when Van Damme thought her microphone was muted.

The incident was related to Daily Maverick by two senior DA members concerned about what they say has since been a hostile relationship between Steenhuisen and Van Damme.

Now Van Damme has been ordered by the DA leader to take a three-month health sabbatical and has been replaced in her role as shadow communications minister by fellow MP Zak Mbhele.

Van Damme declined to discuss the matter with Daily Maverick, saying that she is reserving comment for her internal legal challenge. On Twitter, however, she expressed outrage about Steenhuisen’s directive to take an unsolicited sabbatical.

“I’ve been open about being sick. I’ve been on sick leave for 3 months, ending 15 Dec. I informed the Chief Whip, I’d still focus on my committee work while on sick leave. I disclosed my illness even though I didn’t need to. So it is being used against me to sideline me,” Van Damme wrote.

She added that even while sick, she still outperformed many of her colleagues.

The letter written by Steenhuisen to Van Damme informing her about the sabbatical stated:

“I remain incredibly concerned about your health situation and the four chronic illnesses that you have been diagnosed with. I understand that these have become incredibly debilitating for you to perform everyday functions, like walking, due to the chronic pain, vertigo and dizziness. I also know that you require significant periods of bed rest.”

Steenhuisen added that the situation would be reassessed on 30 March 2021.

The newly elected DA leader made the decision to place Van Damme on sabbatical on the eve of announcing his new shadow cabinet – the opposition’s term for spokespeople on government departments. Van Damme was announced as being replaced in her role by Mbhele. Steenhuisen has since said that even if she decided not to take the sabbatical, Mbhele would still replace her.

Party insiders allege that it is quite clear that Steenhuisen is opting to remove Van Damme as a result of the animosity between the two – but due to her high-profile status in the party and her high-value contributions as shadow communications minister, Steenhuisen is using Van Damme’s health status for political cover.

Van Damme has won plaudits for her work on Parliament’s communications committee. She played a key role in the downfall of Gupta-employed PR firm Bell Pottinger and more recently has been an important voice in holding Communications Minister Stella Ndabeni-Abrahams to account.

Media lawyer Justine Limpitlaw, a close observer of the SABC saga, said on Twitter that Van Damme is “always the best-prepared MP in the room” when it comes to Parliament’s SABC hearings.

Van Damme is, however, known to be less popular among more conservative DA voters, who see her as needlessly outspoken on social media and were unimpressed by her 2019 public showdown at the V&A Waterfront with a family she accused of racism.

“This is clearly [aimed at] politically ostracising someone who didn’t support John as leader and has had a profoundly fractious relationship with him,” a senior party representative told Daily Maverick.

“The leader could have – as he is entitled to – shifted her without the nonsense of a sabbatical. He didn’t have to evoke a sabbatical to justify firing her. Anyone serves in the shadow cabinet at the behest of the leader.”

The DA’s leadership insists this interpretation is not accurate.

“There is a genuine concern about Phumzile’s health,” party Chief Whip Natasha Mazzone told Daily Maverick. She was the DA representative designated to communicate on the matter.

“Of course, just shuffling the cabinet [to exclude her] would have been easier. But that doesn’t address what we believe to be a serious problem. Part of leadership is knowing if someone is suffering. [Van Damme] has been brave in documenting her illness; she had three months’ sick leave. But we felt that she would benefit from an extended break.”

Mazzone confirmed that the Zoom incident took place, but denied that it had lingering effects.

“There was a faux pas on Zoom, and it was sorted out. We all laughed about it, and it went down as one of the Zoom laughs of the year,” she told Daily Maverick.

Van Damme has made it clear on social media that she does not intend to leave the DA and will launch a legal challenge against Steenhuisen’s move.

Supporters within the party say she is right to do so, pointing out that the DA has several times challenged presidential appointments and dismissals on the grounds that the decision was irrational. The same principle, they contend, is at stake here. DM