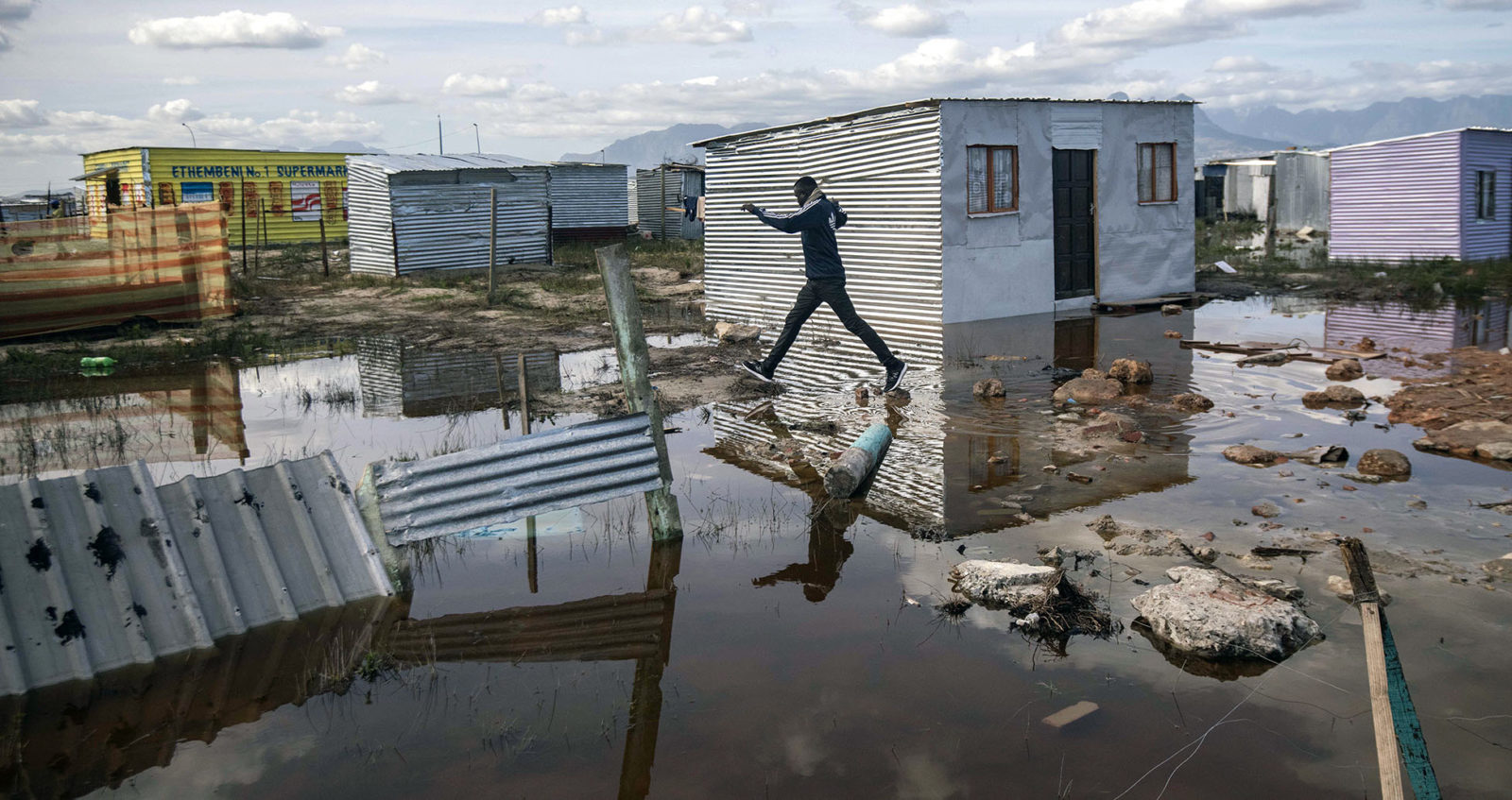 Daily Maverick’s Our Burning Planet and Maverick Citizen are partnering with the Climate Justice Charter Movement to report on issues central to our survival – the climate crisis and people’s democratic alternatives. This article is part of the series, and focuses on the important role labour has to play in the charter, specifically in relation to a secure water future.

The climate crisis is upon us and denialists like US President Donald Trump and others are losing the battle as the effects of climate change on the environment and people globally become a reality.

This is not to say that those of us fighting to keep the rise in the earth’s temperature below 2°C are gaining traction. Instead, corporates and monopolies with vested interests in maintaining the status quo are stepping up their efforts to extract as much as they can against a ticking climate change clock.

The situation in South Africa is no different – the response to the crisis seems almost lethargic. And all the while, South Africa gets hotter, with parts of the country, like the Eastern and Northern Cape, plunged into perpetual drought as water, food and health insecurities worsen.

Combined with the Covid-19 pandemic, the situation becomes even bleaker.

The need for an alternative – one informed by innovation and vigorous debate and discussion – is dire. True to our nature as South Africans, we are running workshops and campaigns across various platforms, making submissions towards this end.

I am singling out the Climate Justice Charter for South Africa initiated by the Co-operative and Policy Alternative Center (COPAC) and drafted and supported by a range of grassroots civil society organisations, NGOs, labour service organisations and trade unions. As the research and education team at the National Labour and Development Institute (NALEDI), we support and have endorsed the charter. We were also part of the development and input from the outset.

I focus on why labour’s support for the charter is imperative. The key point of departure is the essence of the charter: the “principles for deep, just transitions”.

Unlike many other processes and documents where this principle is either watered down, misappropriated and even at times completely misunderstood, the charter not only builds on labour’s positions but accentuates it by providing a trajectory that leads to socio-ecological transformation.

The charter also states categorically that this is imperative to any alternatives, plans and processes for transformation in our society.

In addition, the charter highlights that the victims of the climate crisis should not be the ones to bear the brunt of the transition. The fact that this climate crisis is one of many dangerous ecological crises we face will not justify such actions.

In point 4 of the charter, under the heading “Democratise the water commons”, the charter defines “water as a public good [that] needs to be conserved, protected from pollution, its use democratically planned” while “citizens’ rights to consume such a resource” must be affirmed.

In 2002, a group of like-minded organisations came together to form a loose network called the South African Water Caucus. This was both in response to the then minister of water affairs, Ronnie Kasrils, who at the time expressed an openness to engage civil society on water-related matters, as well as to the World Summit on Sustainable Development that would see civil society organisations from across the globe come to South Africa, with water as a central theme.

The South African Municipal Workers Union (SAMWU), represented by its national water coordinator, played a critical role in the expression of labour’s opinion on water issues.

While the water crisis was not conceptualised as a climate change problem, the issues of droughts, floods, water use efficiency, water as a common good, keeping water public, maintaining appropriate water conservation that was not punitive, the fight for free basic water, high-quality drinking water, rehabilitation of rivers, no to building dams, no to prepaid meters and water for all were put on the table.

As the water sector moved from the Reconstruction and Development Programme (RDP) to Growth, Employment and Redistribution (GEAR) it underwent a transition, and those of us in the South African Water Caucus, guided by labour, ensured that at every opportunity the justice element had to prevail.

There was a time when a strategic alliance between labour and communities was paramount, and this saw SAMWU workers refusing to install prepaid water and electricity meters in any poor community, for example. The joint alliance gave rise to the Social Movements Indaba in 2002.

Eighteen years later, the water sector is in a mess, with the gains made in the early 2000s gradually eroded or swept under the carpet.

Concepts such as water for growth and sustainable development, water for all, water is life and sanitation is dignity, and the progressive realisation of rights have been reduced to clichés, as some of the most unequal and still largely rural parts of our country – almost 40 years into democracy – do not have access to clean potable water, even though this right is enshrined in the Constitution.

GEAR in 1997 started to lay the foundation for a neoliberal approach to water as a service and a resource.

By the time Edna Molewa became water and environment minister in 2010, labour’s participation in the water sector had become compromised, both at the departmental and local government levels. By 2015 and 2016, the transitions that took place in the water sector were anything but just.

Dam infrastructure was abandoned. Operations and maintenance budgets were redirected and, as a result of the lack of maintenance, as well as a lack of municipal workers to hold clients to account or pressure local government into action, the quality of services began to deteriorate severely.

Today close to 70% of water that is unaccounted for is lost through broken pipes and poor infrastructure caused by a lack of maintenance.

The Blue Drop and Green Drop certification programmes, which encourage and acknowledge continuous improvement and performance excellence in the management of drinking water services and wastewater treatment plants in South Africa respectively – in which labour and civil society had played a critical role – have just ceased. As a result, communities are drinking potable water that does not comply with the South African national standard for drinking water, SANS 241.

Worse than the failure to maintain infrastructure is the dire lack of it.

During the spates of drought in the Eastern Cape, several local municipalities were found to be, and are still, lacking. They do not even have the ability to provide water services through boreholes, or trucks to deliver clean water to communities.

This situation has continued in many parts of the Eastern Cape, and the Covid-19 pandemic in the context of poor water provision and sanitation will no doubt result in escalated numbers of both coronavirus infections and deaths.

With the festive season approaching this is bound to worsen.

The situation has become so out of hand that, for example, the community of the Eastern Cape town of Dutywa was forced to source water from drains. Fortunately for the community of Ngqushwa (also known as Peddie), which is not new to water struggles and woes, Gift of the Givers drilled it a borehole, finally providing the community with clean water.

A similar tale can be told of the communities of Limpopo, who have watched millions go into the building of dams that collect water, but still have no water as the municipality has failed to install infrastructure needed to pipe clean water to their homes. Similarly, entire budgets are squandered and the community is left without.

The state of local government in South Africa is fast deteriorating and the number of municipalities under administration is not a laughing matter.

eThekwini (Durban) made headlines a few days ago as unaccounted for water increased significantly as kilolitres spilt into the streets from leaking pipes due to broken infrastructure.

These stories may have been taken from two provinces, but the narrative reverberates through the country as water problems and the lack of planning and effective management abound.

What is needed is a just transition, one that not only secures water as a resource (noting the failure on the part of the department of water and sanitation to do so), but also equitable, effective, clean and affordable water services – one that secures our water future.

History shows us that with a strong voice from labour this is possible.

SAMWU has just come out of its national congress and some of the key challenges in terms of local government, as well as climate change and water and food security in the context of the pandemic and unemployment, were undoubtedly discussed.

The next step would be for SAMWU to engage the charter and commit to take forward the issues that affect it more specifically, but also simultaneously endorse the Climate Justice Charter, noting its broader objectives, as we advance our fight for a just transition and an alternative, eco-socialism.

To change the system, not the climate, for another world is possible.

Since there are no jobs on a dead planet, workers of the world have to rise to this challenge and lead. Without workers, there is no just transition, no matter how deep the transition. DM/MC

Hameda Deedat is the executive director of NALEDI.