Pedal to the metal: Petrol price forecasts look positive for 2021 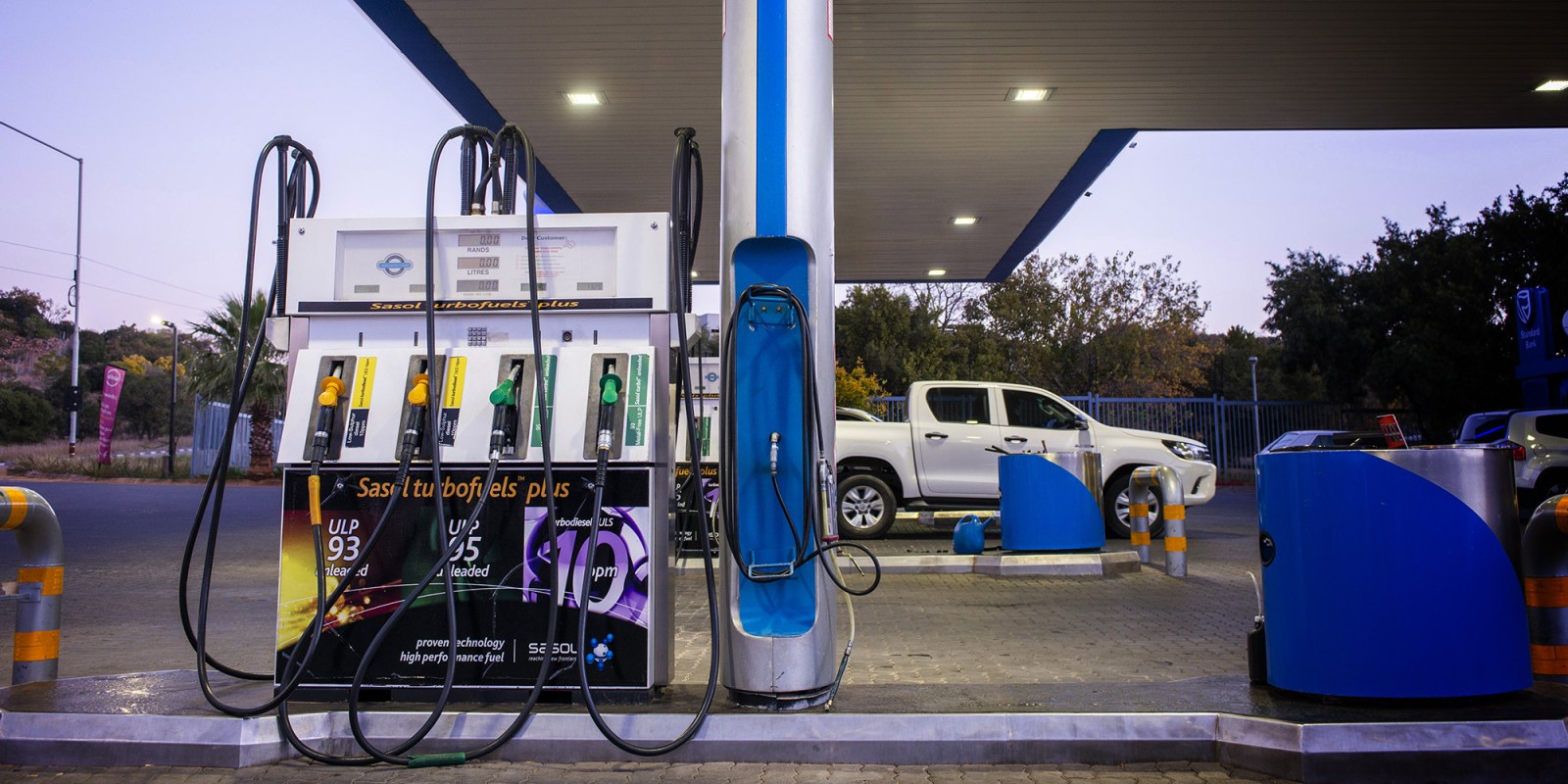 A cut in petrol price sent some Christmas cheer the consumer’s way when the Department of Mineral Resources and Energy decreased both the 93 and 95 unleaded petrol prices. (Photo: Waldo Swiegers / Bloomberg via Getty Images)

The value of the rand and the price of Brent crude fundamentally fuel the cost of petrol, but policy and politics prescribe what we pay at the pump.

A cut in petrol price sent some Christmas cheer the consumer’s way when the Department of Mineral Resources and Energy decreased both the 93 and 95 unleaded petrol prices by 13c/litre on the first Wednesday of December.

South Africa’s fuel prices are adjusted monthly, informed mostly by international oil costs and the exchange rate. In November, the rand appreciated against the dollar from 16.46 to 15.63. This is despite Brent crude increasing from $40.63 to $42.10 a barrel during the period under review. It was the highest price since March, mostly on the back of more positive news about Covid-19 vaccines, the department says in its official press announcement.

Furthermore, crude oil prices continued to climb after the Energy Information Administration reported an inventory draw of 800,000 barrels per week during November 2020.

It is a far cry from June 2019 when South Africa’s petrol price hit R16.56 and R16.76 for a litre of 93 and 95 unleaded fuel. That was the highest the petrol price had ever been, according to economic data from the AA. So there is some celebration to be had in the short term.

That is when the country’s carbon tax came into play, which added a small, but significant total on to our fuel levies, relinquishing the relief rendered by a rally in the rand and the cut in price of crude.

But Elna Moolman, head: SA macroeconomic, fixed income and currency research at Standard Bank, says she expects global oil prices to drift sideways around the prevailing levels next year. Likewise, we are more constructive than the consensus about the likely rand trajectory in 2021, and expect it to remain quite resilient, with an average forecast around R15.40/$ through the year.

“This implies a relatively stable basic fuel price. We also don’t expect a large increase in total fuel taxes so we foresee only a moderate rise in fuel prices next year,” Moolman says.

“This is one of the factors that will underpin the increase in inflation that we foresee in 2021 (to an average of 4% from an estimated 3.3% in 2020) despite weak economic growth. Electricity costs, which we expect to rise at a double-digit rate at next year’s annual tariff increase, should add to this upward pressure amid a generally inflationary environment,” Moolman concludes. 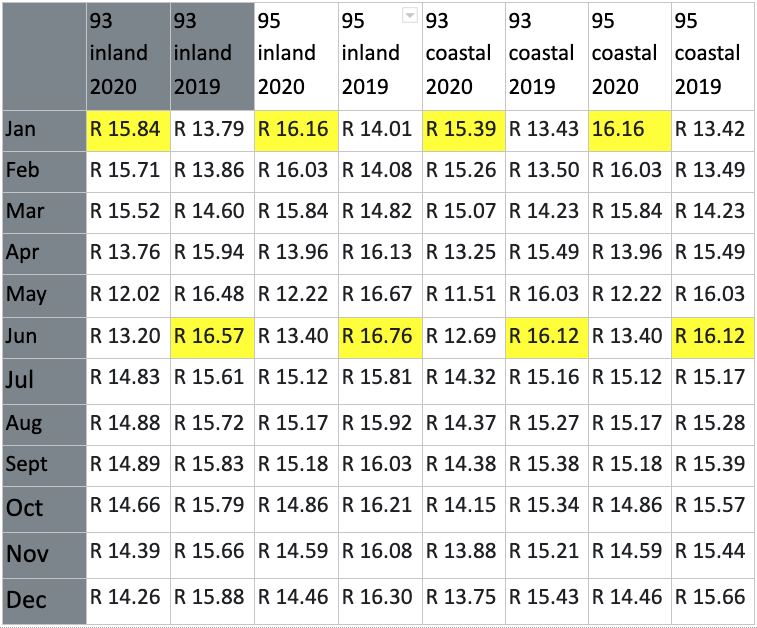 The reason the privilege was not passed on to the consumer was to cover the wage bill of costs of the Motor Industry Bargaining Council agreement of 13 December 2019, where the minister approved an increase in the retail margin of petrol of 5.60c to cater for the salary increase for pump attendants, cashiers and other administration staff at petrol stations across the country.

The previous retail margin mark-up was in November 2018, when it moved from from R198.21 to R206 that month, and due to the late conclusion of the negotiations in 2019 the increase ticked over to 2020.

But two more margin mark-ups went through this year. In September it went up to R216.90 from R211.60 in January and up to R221.60 at the end of November, according to data collected by Economists.co.za.

Economist at the firm Mike Schüssler says the increases were probably implemented prematurely to assist the country’s petrol station owners during the Covid-19 lockdown. 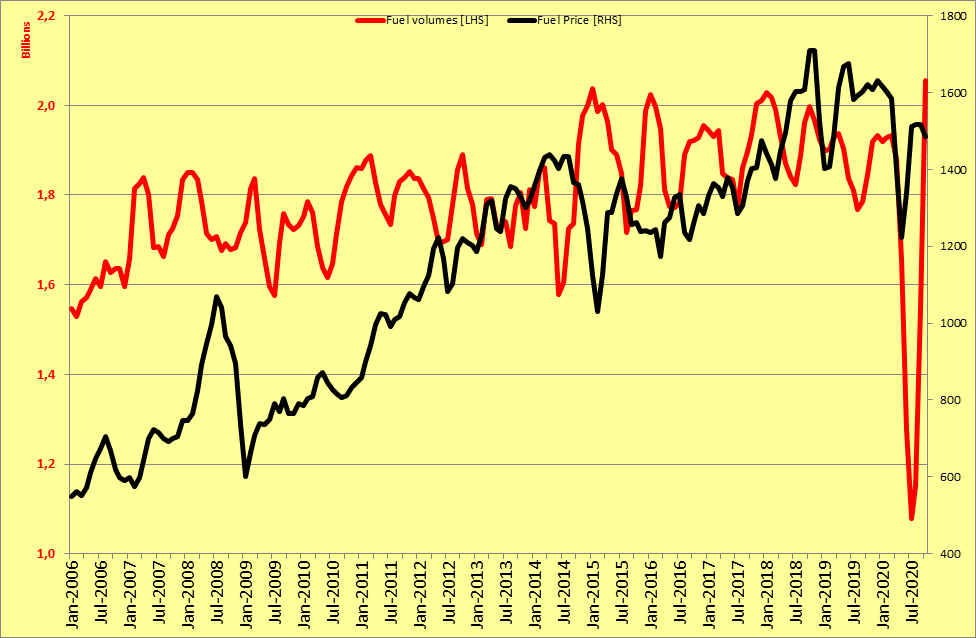 “As the graph shows it was the biggest decline on record in fuel volumes (as based on tax collection data), but the bounceback is making up for some lost ground,” Schüssler says. “Also, people are driving more now, but we are still not back to normal driving.

“So part of this is perhaps payments that did not go through or some storage, as role players believe the oil price is shooting up, so buy more in the hope they sell it later for more,” says Schüssler.

The minister’s media team has not yet responded to Business Maverick’s queries on the matter. DM/BM