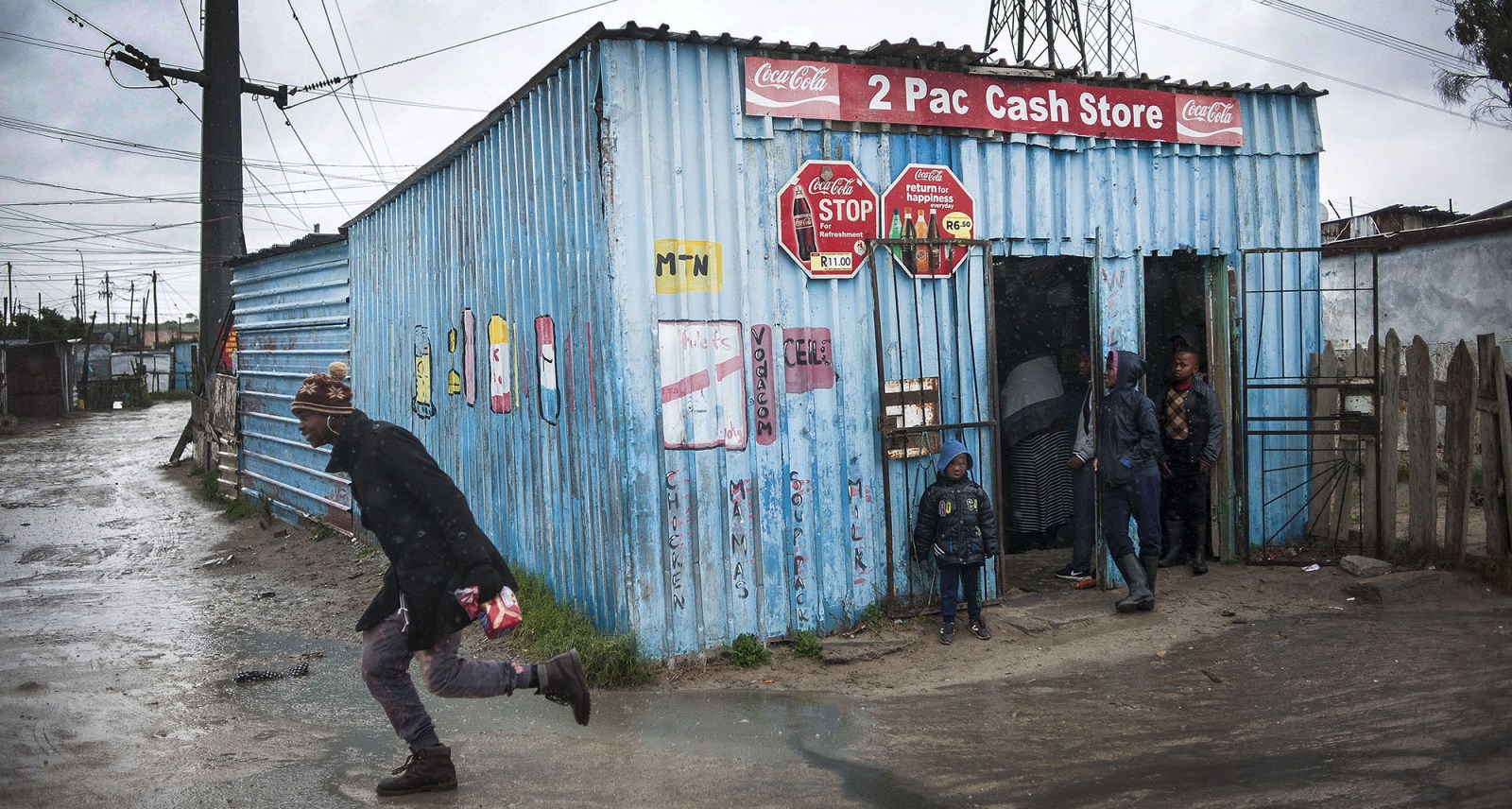 ILLUSTRATIVE: Boys stand under a shelter of a spaza shop on June 19, 2016 in Khayelitsha, South Africa. (Photo: Gallo Images / The Times / David Harrison)

Politicians and economic elites are pushing anti-immigrant messages and policy ahead of 2021’s local government elections, scapegoating these people to generate support.

In Parliament in August, President Cyril Ramaphosa was asked how he intended to ensure that trading in the informal economy was reserved for South Africans only. He replied that it was necessary to “avoid populist temptations to blame economic challenges and unemployment on foreign nationals” while taking “into account the frustration of those South Africans who felt pushed out of the economy by foreign nationals”.

He also announced that an inter-ministerial committee (IMC), co-chaired by the departments of Employment and Labour, and Home Affairs, had been established to deal with issues of labour, migration, border security and skill shortages.

In the past, despite politicians’ hostile positions on immigration and high levels of xenophobia in the country, most political parties in South Africa have not over-politicised immigration in their electoral manifestos. However, political discontent, economic insecurity and social grievances, exacerbated by Covid-19, have led to nativist rhetoric. Driven by opportunism, economic elites and politicians have begun scapegoating immigrants to generate support.

Former Johannesburg mayor Herman Mashaba (Action SA leader) and heads of the South Africa First movement and the African Transformation Movement have accused foreigners of violating immigration laws and stealing jobs from locals. The same anti-immigrant messages, echoed by social media campaigns and populist slogans, will probably play a notable role in the pathways towards the 2021 local government elections.

Ramaphosa’s call to fight the rising tide of populism is not simply a warning to opposition parties. It’s also directed at those in the ruling ANC who have propagated xenophobic statements and blamed foreigners for South Africa’s many socio-economic problems. As a result, businesses run by foreigners in the informal sector have been targeted, leading to exclusionary policies and proposals to ban foreign-owned spaza shops.

In 2012, the ANC Peace and Stability discussion document indicated that “non-South Africans should not be allowed to buy or run spaza shops or larger businesses without having to comply with certain legislated prescripts”. It also questioned whether municipal bylaws should apply equally to asylum seekers and citizens.

In the same year, Limpopo police were instructed to selectively shut down foreign-owned businesses during Operation Hardstick. The Supreme Court of Appeal ruled in 2014 that the closure of businesses operated by refugees and asylum seekers was unlawful and considered them entitled to run their businesses and apply for trading licences.

Myths associated with informal trade include the belief that foreigners dominate the sector. However, evidence from a study conducted in Johannesburg suggests that only two out of 10 informal traders are non-South Africans. Furthermore, research highlights the economic contributions made by foreign merchants to local economies and their positive impact in creating jobs for South Africans.

At the same time, urban-based informal economic activities among foreigners have proliferated. This rise is partly a product of history and evolving dynamics in the region, as new Institute for Security Studies research on migration and governance in southern Africa shows.

The fracturing of southern Africa’s contract labour system in mining has paved the way for spontaneous and informal regional cross-border movements. Data from the 2017 Quarterly Labour Force Survey reveals that 47% of migrants are employed in precarious and unregulated environments, and of these nearly 39% are employed in the informal economy.

Anxiety over foreigner businesses became heightened after a wave of xenophobic riots in Gauteng and KwaZulu-Natal between March and May 2015. The violence caused the National Assembly and the National Council of Provinces to establish an Ad Hoc Joint Committee on Probing Violence Against Foreign Nationals.

The committee’s final report shifted the blame to foreigners, indicating that they had contributed to the violence by dominating trade in certain sectors in informal settlements. The committee also concluded that migrants had used business models “to discourage competition such as forming monopolies, evading taxes, avoiding customs and selling illegal and expired goods”. This reflects a political tendency to demonise informal businesses owned by foreigners.

In September 2019, Small Business Minister Khumbudzo Ntshavheni revealed the plan for legislation to bar foreigners from certain sectors, including the small business sector. Along the same lines, in October 2020, the Gauteng government introduced the Gauteng Township Economic Development Bill to ban foreigners without permanent residency from operating informal businesses in townships.

Since October 2020, South African police and Limpopo’s government have targeted Zimbabwean migrants and informal traders in that province. Several hundred people have been deported as a result.

So far, policymakers have paid little attention to the benefits of foreign informal-sector traders. Instead, they have favoured arguments about unfair business practices and perceived disadvantages for South African dealers.

The White Paper on International Migration, released by Home Affairs in 2017, recommended a new visa regime for Southern African Development Community (SADC) informal traders and small and medium enterprises. This policy sounds advisable and in line with the SADC economic policy initiatives to promote trade and regional integration and reduce poverty.

Nonetheless, the informal economic activities of foreigners in South Africa remain a thorny issue exploited for political gains. A new wave of populism could provide fertile ground for anti-immigrant sentiments.

To what extent the recently formed IMC will be able to deal effectively with migration and labour issues and provide guidance to the government is the question. A more evidence-based approach to policy and practice would help dispel myths and misconceptions about migration.

Hopefully, the IMC will be more effective than the Ad Hoc Joint Committee on Probing Violence Against Foreign Nationals. The committee did little to tackle the root causes of xenophobia and dismissed the resulting violence as criminal activity. DM