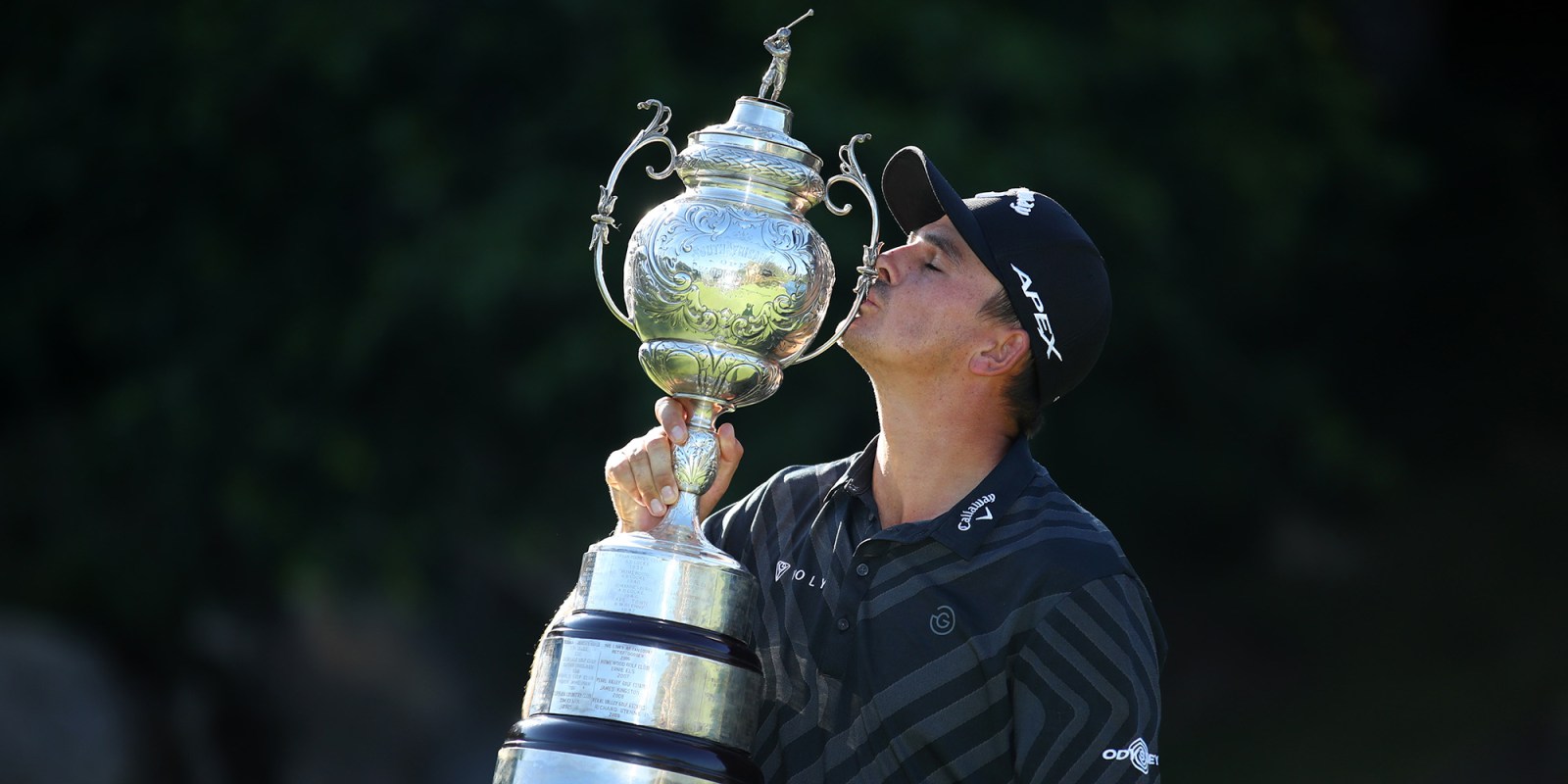 Christiaan Bezuidenhout kisses the SA Open trophy after winning by five shots at the Gary Player Country Club at Sun City on Sunday. The 26-year-old became the first back-to-back winner on the European Tour in three years after his victory at the Alfred Dunhill Championship the previous week. (Photo: Warren Little / Getty Images)

Christiaan Bezuidenhout became the first man in three years to win successive titles on the European Tour after a five-shot SA Open victory on Sunday.

Christiaan Bezuidenhout has played his last eight tournament rounds in 32 under par and won the last two tournaments by a combined nine shots.

The languid Bezuidenhout, who speaks slowly due to a slight stutter, has a similarly easy swing. His tempo is almost hypnotic and his patience and discipline as he worked the ball around two of South Africa’s toughest courses in the past two weeks, is what separated him from the field.

On Sunday Bezuidenhout won the 110th SA Open, played at the Gary Player Country Club at Sun City, the second-oldest Open in the world after the British Open. He finished on 18-under for a wire-to-wire win, where he simply picked up from winning the Alfred Dunhill Championship at Leopard Creek a week earlier.

After three rounds of five-under 67, which gave him a five-stroke lead going into Sunday’s final round, Bezuidenhout completed the job with a final-round 69. He was five shots clear of Wales’s Jamie Donaldson when it was over.

Last week, he won the Dunhill Championship by four shots over a gaggle of four players. Bezuidenhout has now served notice that he is a favourite at next week’s DP World Tour Championships – the season finale on the European Tour.

The Dubai event is for the 60 leading players on the European Tour who qualified over the course of the season. Bezuidenhout is fifth on the Race to Dubai standings.

Bezuidenhout took home R2.96-million at Sun City, which added to the R4.58-million he won at Leopard Creek made for a good seven days’ work. His world ranking, which rose to 41 before the SA Open, is set for another boost while he has the potential to rake in another huge payday in Dubai with a good finish.

It wasn’t all straightforward for Bezuidenhout on Sunday. After starting the round with a five-shot lead he carded a one-over 37 on the front nine at the renowned Pilanesberg course. A bogey at the eighth gave the chasing field, spearheaded by veteran Donaldson, some hope.

But despite his quiet and polite demeanour, Bezuidenhout has the instincts of a stone-cold killer on the golf course. Three straight birdies on 10, 11 and 12 sent a message to the rest of the field that they were playing for second. He added another birdie at the par-three 16th for good measure and could enjoy the final two holes knowing he had a substantial cushion. He played the back nine in 32 strokes.

“I fought hard today, the front nine things didn’t really go my way and I just dug deep to come out with a win today.

“That was massive (birdieing the 10th, 11th and 12th). I have to say, the second putt on 11 was huge and obviously the putt on 12 was a bonus, I just tried to get it close inside a couple of feet and made it.

“I knew I had to make pars coming in and I did it. I’m really, really chuffed to stand here as a winner.”

When he closed with a par, he became the first player since Justin Rose in 2017 to record consecutive European Tour victories. Donaldson sealed second place at 13-under, with South African Dylan Frittelli two shots back in third and compatriot Dean Burmester in fourth at 10 under.

JC Ritchie birdied the last to move into solo fifth at nine under, German Marcel Siem, Hennie du Plessis and Zimbabwe’s Scott Vincent were one stroke further behind in a tie for sixth while Frenchman Julien Guerrier and Scot Connor Syme rounded off the top 10 at seven and six under par respectively.

South African Casey Jarvis claimed the Freddie Tait trophy as the leading amateur, finishing tied 25th on one under par with rounds of 73, 74, 71 and 69.