Uganda: where running for political office is the equiv...

Uganda: where running for political office is the equivalent of a death sentence 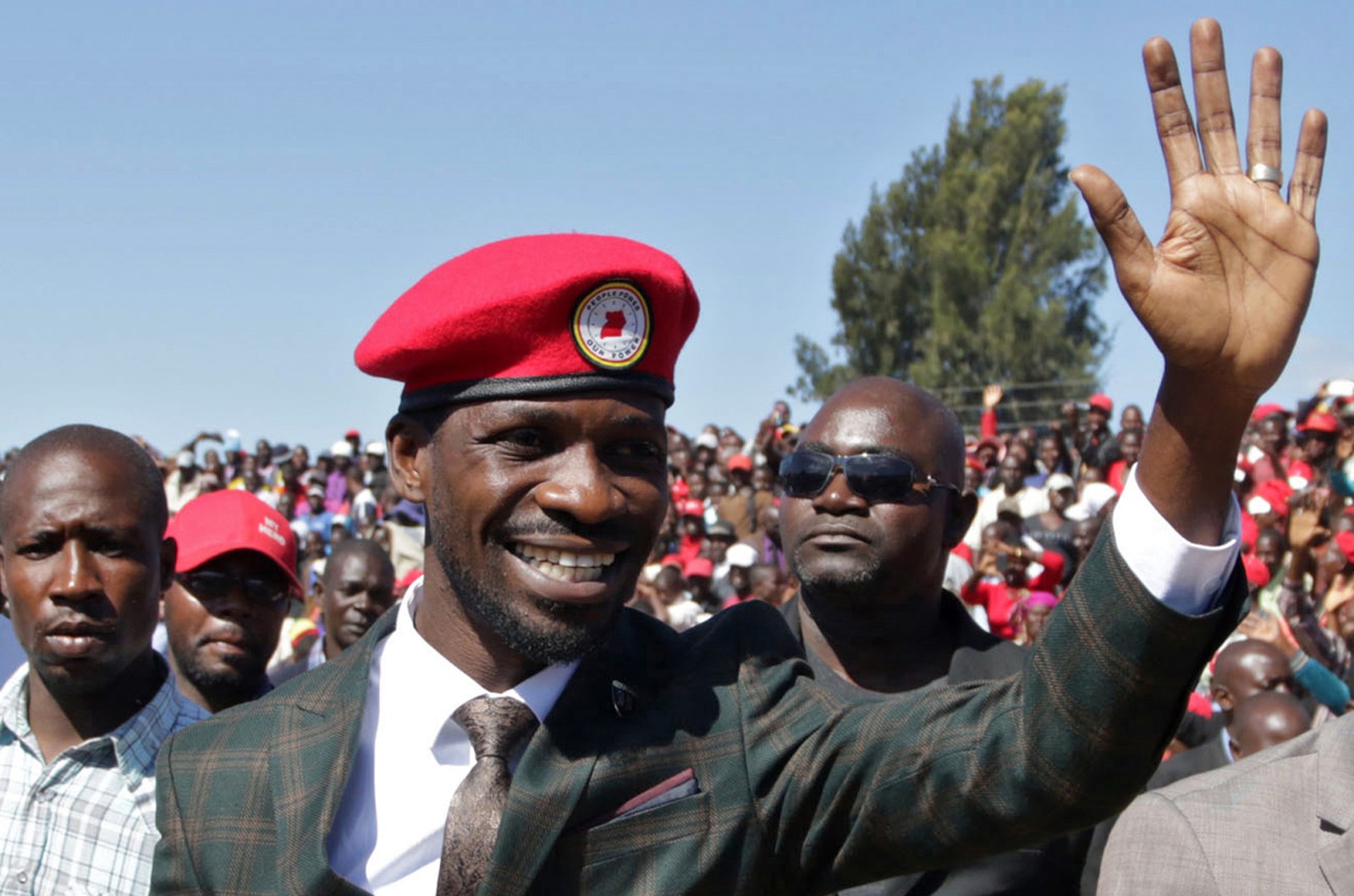 Ugandan opposition leader Bobi Wine's (C) People Power Movement is shaping up to become the greatest threat to the power of Uganda's President Yoweri Museveni, who has held office since 1986. (Photo: EPA-EFE/Aaron Ufumeli)

We cannot allow these acts of intimidation to affect us. A day after the assault I resumed my campaign, wearing a bulletproof vest and a protective helmet.

Uganda has been held up as a model of what is described as “stability” in Eastern and Central Africa, regions where this is in short supply.

The country was indeed once a model of democracy and stability. But the former has been steadily worn down by more than three decades of decreasingly tolerant rule by Yoweri Museveni; and the latter is important because a stable, relatively conflict-free Uganda is a platform for peace and security in the troubled region. That stability is under threat – not from the long list of external actors that have threatened Uganda over the past three decades, but from within.

As Uganda heads for elections on 14 January, the security forces have openly begun to engage in the violent suppression of the opposition and have, most recently, fired at a vehicle in which I was travelling. Dan Magic, my producer and member of my campaign team, was injured in the incident.

Writing in the Washington Post, Jeffrey Smith of the non-profit organisation Vanguard Africa, said: “The bloody images and video from the scene are chilling. They remain shocking even after nearly three years of relentless attacks on the biggest pro-democracy movement in Uganda’s post-colonial history. Having the audacity to run for political office should not be the equivalent of a death sentence. Sadly, in Uganda, this appears to be the case.”

We cannot allow these acts of intimidation to affect us. A day after the assault I resumed my campaign, wearing a bulletproof vest and a protective helmet. Imagine that. A candidate who has to wear the protective clothing used by security forces in war zones to protect himself.

I said on Twitter: “Even though I walk through the valley of the shadow of death, I will fear no evil, for the Lord is with me!”

Uganda is facing a breakdown of order as the security forces use the Covid-19 pandemic as justification for clamping down on campaigning by the opposition. The same rules do not apply to the ruling party, which continues with mass public appearances.

This is because we have been more successful than most imagined we could be. We have drawn vast crowds in all parts of the country as the youth, who make up more than 70% of the population, demand change and a better life.

The security forces are behaving the way they are because they are realising that Museveni’s reign is under threat. If they continue, they will further delegitimise the election and cause Uganda to implode, threatening the stability of the region.

Such a scenario is becoming increasingly likely as Museveni adopts chilling rhetoric.

Admitting that 54 people had been killed by security forces during recent protests, he nevertheless insisted that opposition protesters had provoked the action by assaulting his supporters.

He said: “In the book of Romans Chapter One, Verse 32, it says, ‘Who, knowing the righteous judgement of God, that those who practise such things are deserving of death, not only do the same, but also approve of those who practice them’.”

Museveni, who was once regarded with affection for his toppling of the undemocratic regime that governed until 1986, said after taking office: “This is not a mere change of guard, it is a fundamental change. The people of Africa, the people of Uganda, are entitled to a democratic government. It is not a favour from any regime. The sovereign people must be the public, not the government.”

We are simply taking him at his word and trying to participate in the democratic process to produce a legitimate, free and fair result. For this, we are being branded criminals.

Museveni, now in his late 70s and with no clear succession strategy in place, is destroying his legacy and will be remembered as just another elderly despot who held on to power too long unless he stops this aggressive approach and embraces democracy.

The US, which has been an ally of Uganda, providing assistance of more than $970-million a year, has begun to air misgivings.

We are witnessing those “human rights deficits” every day as our supporters are attacked, killed and arrested without cause.

We are appealing to the African Union and its current chair, Cyril Ramaphosa, as well as the US State Department, the European Union and others interested in Uganda’s welfare to step in now to ensure a free and fair election.

This is urgent because, in our estimation, we are already under very brutal rule, perhaps worse than that of Uganda’s predecessors. DM168

This is an opinion piece by Robert Kyagulanyi Ssentamu, known by his stage name Bobi Wine, who is a Ugandan politician, singer, actor, and businessman.