#FakeNews and lies are amplified on social media 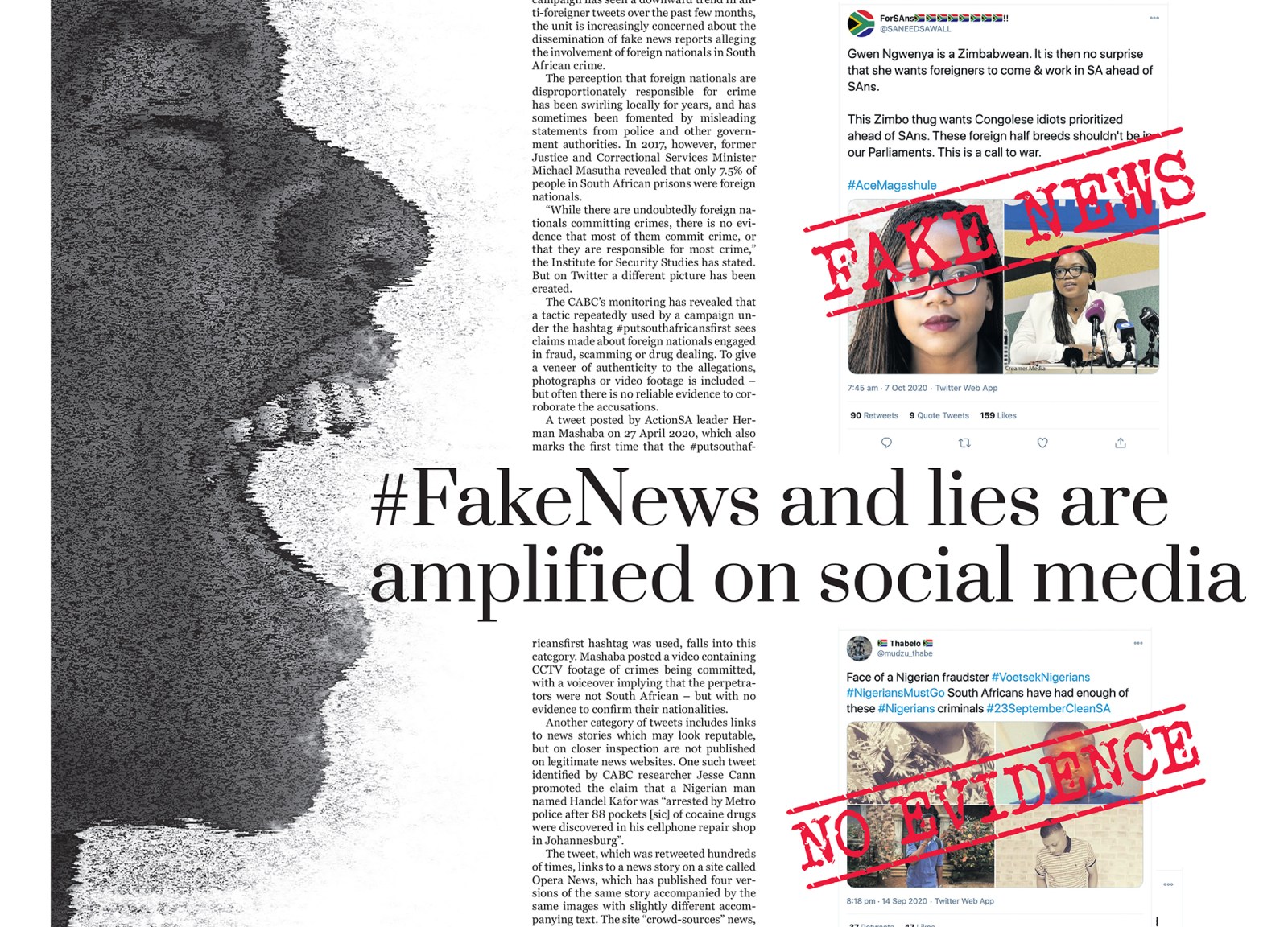 Anti-foreigner hashtags continue to swirl around local Twitter, together with misleading claims and links to fake news sites. Don’t be fooled, warns a UCT research unit.

The tweets feature photographs or videos of black men said to be committing crime. They are accompanied by the claim that the men in question are foreign nationals: usually from Zimbabwe, Nigeria, or Democratic Republic of Congo. The posts are tagged with hashtags stoking antipathy towards foreigners. They are often shared hundreds of times, and seen by thousands more. Yet the information they contain is usually false, or based on a kernel of truth that is misleadingly spun to support an untrue conclusion.

“Because of its potential to incite violence, the spread of xenophobic content on Twitter is something that we must monitor and push back against,” says Adam Armstrong, head of the Digital Manipulation Project at the University of Cape Town’s Centre for Analytics and Behavioural Change (CABC).

In August, the unit drew attention to an orchestrated campaign of xenophobia being mounted on Twitter by a few central accounts working to artificially amplify anti-foreigner sentiment in South Africa. One of the key Twitter users involved, “uLerato_Pillay”, was unmasked in September by the DFRLab as being run by a former South African National Defence Force soldier called Sifiso Gwala.

Although the CABC says that the exposure of uLerato_Pillay and the xenophobia campaign has seen a downward trend in anti-foreigner tweets over the past few months, the unit is increasingly concerned about the dissemination of fake news reports alleging the involvement of foreign nationals in South African crime.

The perception that foreign nationals are disproportionately responsible for crime has been swirling locally for years, and has sometimes been fomented by misleading statements from police and other government authorities. In 2017, however, former Justice and Correctional Services Minister Michael Masutha revealed that only 7.5% of people in South African prisons were foreign nationals.

“While there are undoubtedly foreign nationals committing crimes, there is no evidence that most of them commit crime, or that they are responsible for most crime,” the Institute for Security Studies has stated. But on Twitter a different picture has been created.

The CABC’s monitoring has revealed that a tactic repeatedly used by a campaign under the hashtag #putsouthafricansfirst sees claims made about foreign nationals engaged in fraud, scamming or drug dealing. To give a veneer of authenticity to the allegations, photographs or video footage is included – but often there is no reliable evidence to corroborate the accusations.

A tweet posted by ActionSA leader Herman Mashaba on 27 April 2020, which also marks the first time that the #putsouthafricansfirst hashtag was used, falls into this category. Mashaba posted a video containing CCTV footage of crimes being committed, with a voiceover implying that the perpetrators were not South African – but with no evidence to confirm their nationalities.

Another category of tweets includes links to news stories which may look reputable, but on closer inspection are not published on legitimate news websites. One such tweet identified by CABC researcher Jesse Cann promoted the claim that a Nigerian man named Handel Kafor was “arrested by Metro police after 88 pockets [sic] of cocaine drugs were discovered in his cellphone repair shop in Johannesburg”.

The tweet, which was retweeted hundreds of times, links to a news story on a site called Opera News, which has published four versions of the same story accompanied by the same images with slightly different accompanying text. The site “crowd-sources” news, meaning that anyone can upload stories. Opera News appears to host a high volume of the xenophobic misinformation currently doing the rounds on local Twitter.

“We know very little about Opera News,” Armstrong told Daily Maverick 168. “Their business model is based on getting online users to submit content which generates traffic. They have sites providing localised content for Côte d’Ivoire, Kenya, Ghana, Nigeria and South Africa.”

Another technique used to spread fake news about foreigners sees the misrepresenting of a real news event. Cann points to a very active account associated with the #putsouthafricansfirst hashtag, @landback_, which claimed in an October tweet that Welgelegen mother and daughter Lizette and Hettie Deacon were murdered by “criminal Zimbabwean immigrants”. In reality, reputable news sources have reported that three of the four suspects arrested for the crime are South Africans.

“This post reflects a classic disinformation technique in which a lie is constructed around an element of truth. As a result, the disinformation gains credibility in the minds of the target audience,” says Cann. He points out that the tactic has been successfully used in Russian propaganda campaigns.

The CABC is urging local Twitter users to be more circumspect when engaging with this kind of dangerous misinformation.

“People often just need headlines to be convinced,” says Armstrong. “Always check the dates of a story, and read beyond the headlines.” DM168

Be suspicious of tweets that: