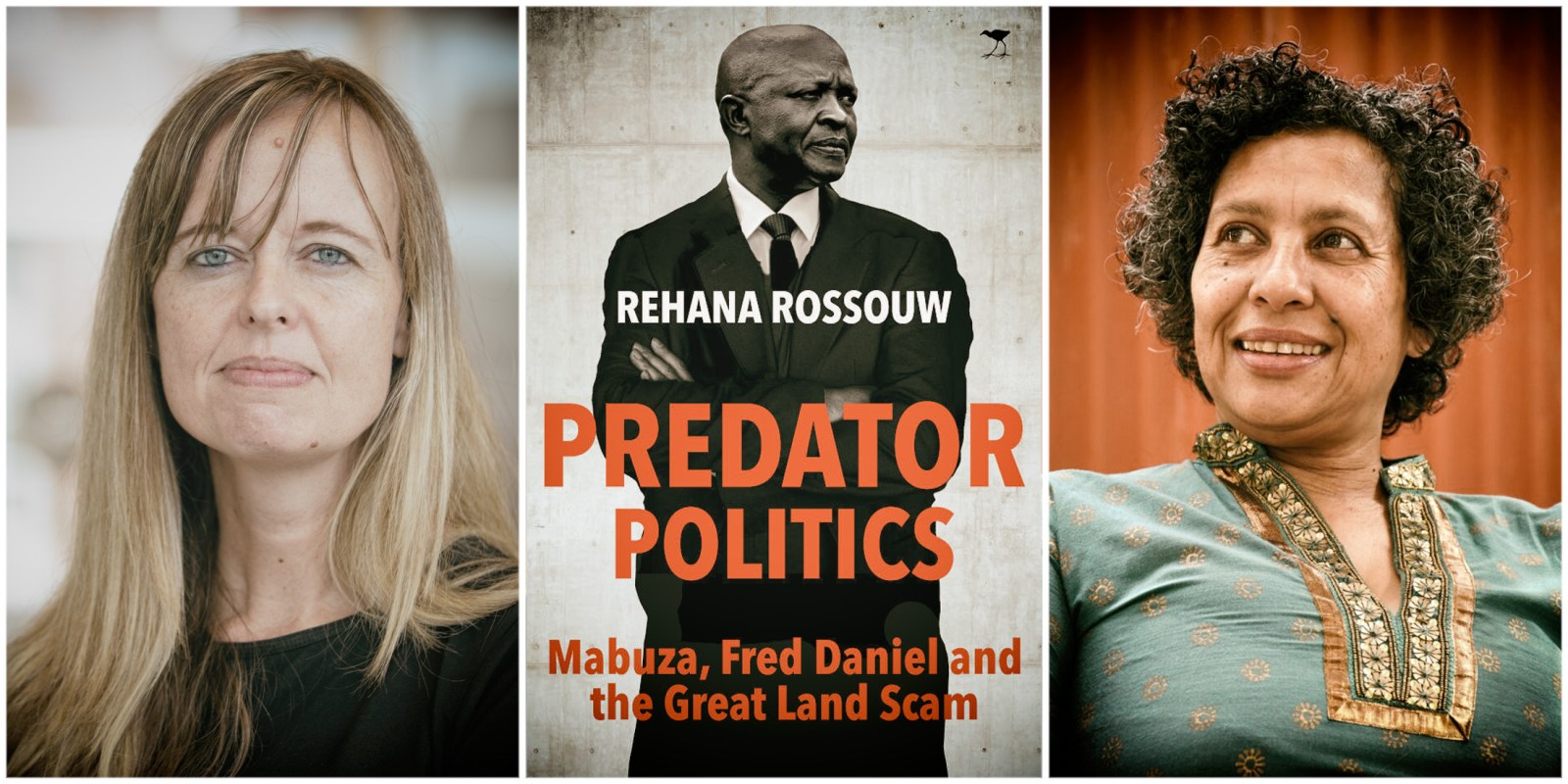 ‘They fail upwards in Mpumalanga,’ author Rehana Rossouw said during a Daily Maverick webinar on Thursday. Her new book, Predator Politics, explores how corruption has derailed land reform and conservation programmes in the province. It details an extraordinary history of alleged graft and details Deputy President David Mabuza’s alleged role.

Rehana Rossouw’s new book, Predator Politics: Mabuza, Fred Daniel and the Great Land Scam, is both an enraging account of how new and old political and corporate players have subverted democratic systems to build power and get rich, and an inspiring story of one man’s courage and perseverance in the face of sustained attacks.

It’s centred on Fred Daniel, a successful businessman who wanted to use his considerable wealth to pursue his passion for environmental conservation and community upliftment. In the late 1990s he bought a farm in Mpumalanga’s Badplaas Valley. Realising the historical, scientific and environmental importance of the land, he then purchased surrounding farms.

He had 39,000 hectares, much of it that needed to be rehabilitated due to the effects of asbestos mining, and made significant investments in building the Nkomazi Wilderness Reserve. By the mid-2000s he had signed a deal to build a luxury One&Only resort.

“His dream was to heal the land and then donate it to the people,” said Rossouw in a Daily Maverick webinar on Thursday.

Then the former Mpumalanga agriculture and land administration MEC (now deputy president) David Mabuza allegedly helped orchestrate a campaign of violence and intimidation to drive Daniel off the land.

Rossouw, who has written multiple novels before her latest non-fiction release, sets the scene by describing how leaders of the KaNgwane homeland effectively became a part of the ANC provincial government after apartheid.

“They basically seamlessly carried their scams from the homeland into the democratic government,” she said.

In 1996, the Mpumalanga Parks Board signed a R25-billion deal with the Dubai-based company Dolphin Group, handing over control of all of the province’s publicly owned reserves. Despite widespread evidence of corruption, only one low-ranking official in South Africa was convicted.

They fail upwards in Mpumalanga.

Around the same time, Mabuza was Mpumalanga’s education MEC before he was sacked for inflating the province’s poor matric results in 1998. He did a stint as an MP in the National Assembly before returning to the province and continuing his political rise.

She said there was a huge amount of evidence implicating the deputy president in obstructing Daniel’s project.

She said Daniel, who has launched a civil claim against Mabuza and the state for hounding him out of the province, claiming damages of more than R1-billion, made detailed enquiries before purchasing his land and was assured no land claims existed on the properties and no valid claims could be filed.

Land claims suddenly started to appear after Mabuza was appointed MEC of agriculture and land administration. He established the Greater Badplaas Land Claims Committee, which Rossouw said was used to pressure landowners into accepting false land claims, and was allegedly central to attempts to intimidate and harass Daniel.

It’s hard to keep track of the allegations against Mabuza, and Rossouw said she had to narrow in on Daniel’s story. She noted, however, how the spike in land claims during Mabuza’s time as MEC appeared to mirror the incredible rise in ANC membership in the province, increasing its power at national conferences, while he was provincial chairperson.

Daniel experienced intimidation, threats of violence and harassment and Mpumalanga officials started making it impossible for him to pursue his plans. The Parks Board had approved his preparations to have game on the property, but it did an about-turn when he applied for a licence to feature the Big Five.

Instead, it pursued a criminal case against him for allegedly operating an animal rehabilitation centre without a permit and confiscated his animals, most of which then died. Officials tried to get him to plead guilty to a criminal charge, which would have made him ineligible for a conservation licence, which he refused.

“This didn’t only happen to Fred,” said Rossouw.

“There are so many people who work in provincial governments, who work in the land claims commission, who have awarded themselves pieces of land,” she said.

She explained how questionable land claims, supposedly lodged by historical owners and supported by politicians, have been used to benefit certain white farmers in the province.

In Mpumalanga, for decades, politicians have gone from small crimes to multimillion-[rand] crimes and they’ve never had a knock on their door.

“Fred Daniel is one of the most determined people I have met,” said Rossouw, touching on the inspirational side of Predator Politics.

“He’s going to fight this to the bitter end and I think he’s right to do so.”

While Daniel’s dream of creating a hub for conservation and empowering residents has been dashed, at least for now, Mabuza has ascended to the deputy presidency.

Rossouw said most citizens expect a visit from the police if they commit a crime.

“In Mpumalanga, for decades, politicians have gone from small crimes to multimillion-[rand] crimes and they’ve never had a knock on their door.”

Daniel’s case is scheduled to be heard in the North Gauteng High Court in June 2021.

Rossouw said Daniel has had to quantify the damages he suffered, but his case wasn’t about the money, and he had requested it be split into two parts, the first being about the issues with the provincial authorities that collapsed his project. DM