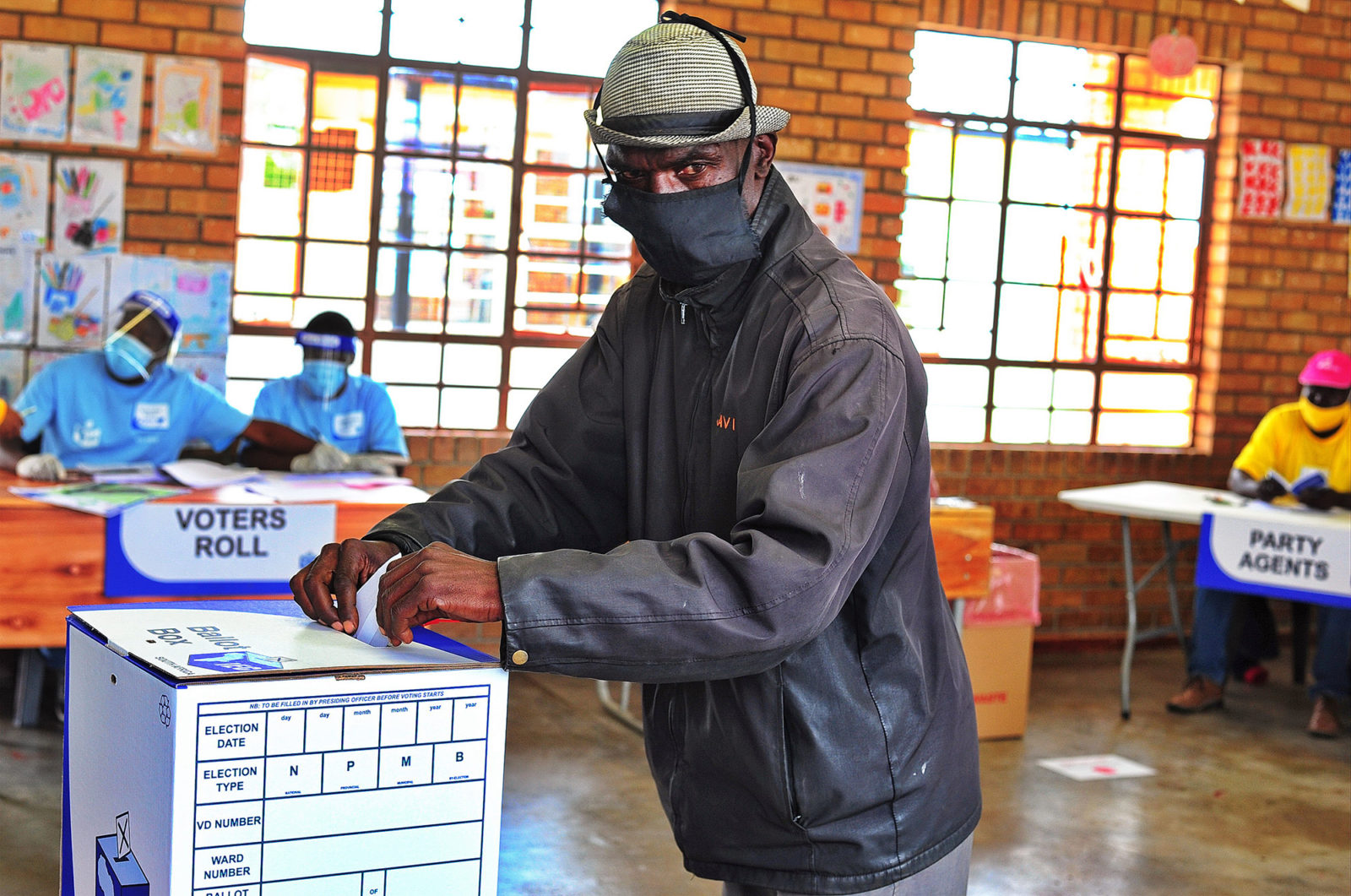 Voters cast their votes in ward 14 in the Polokwane municipality in a by election on Wednesday, 11 November 2020. The seat was left vacant after the death of an ANC councillor in November 2019. Photo: Lucas Ledswaba/Mukurukuru Media

There will be 24 by-elections on Wednesday, 9 December. There might not be 107 seats at play as there was on Super Wednesday in November, but at least one by-election is being held in all nine provinces. This first preview looks at the Northern Cape, Free State and the Eastern Cape.

As per Super Wednesday, the high-stakes by-elections continues in the largest province as there is a possibility that power changes hands in both municipalities where by-elections are taking place. The ANC defended all 17 Northern Cape ward seats on Super Wednesday and won two seats off the DA in Phokwane (Hartswater) and Renosterberg (Phillipstown). The party did lose some ground to the EFF in the Phokwane by-elections, which saw it lose two proportional representation (PR) seats.

Thembelihle is a small municipality in the Pixley Ka Seme district which includes Hopetown, Strydenburg and Orania. The ANC lost control of the municipality in December 2011 when Danny Jonas, a ward councillor for the party, was expelled and stood as an independent in the by-election for the seat. The ANC won outright control again in 2016, but it is only a one- seat majority.

Steynville is a part of Hopetown which lies between the N12 national road, linking the town with Kimberley and the R369 regional road connecting the town with Orania. The ward is a few kilometres from the Orange River.

The ANC beat the DA by a margin greater than 2:1 on the proportional ballot in 2016. The DA did better in 2019, getting 35% of the vote on the provincial ballot in the two voting districts making up this ward. The DA is sitting out this by-election as the ANC has to fend off three independent candidates. More independent candidates are standing in this one ward than in the entire set of ballots for the Phokwane by-elections in November. Candidates include Evelynn Oliphant, who comes from the ANC, and Suzette Madekane, who has served as a DA councillor in Thembelihle. Travor Louw is running as an independent. The EFF is also contesting.

If the ANC loses this reasonably safe seat, the DA, with its two seats, the EFF with its one seat and the independent could form a new government in Thembelihle.

!Kheis is in the ZF Mgcawu District of the Northern Cape in the Green Kalahari. Its seat of power is in Groblershoop where this by-election will be held.

Groblershoop sits where the N8 and N10 national roads connect. The N8 allows residents to have a direct route to Griekwastad while the N10 connects Griekwastad with Upington.

In 2013 Paul Vries, the former ANC councillor ran as an independent for his Ward 3 seat. Vries used the colour pink as his campaign theme. He won back his seat and cobbled together a coalition with the opposition parties to wrest control from the ANC. The ANC won back control of !Kheis in 2016 and also won Ward 3.

Vries will try again to win back his seat as his name is on the ballot. Charismatic pastor Al-Ricko Smith is also running as an independent, with the EFF completing the list of contestants wanting the honour of representing Ward 3.

The DA received 31% of the vote on the provincial ballot in 2019 but is not contesting the by-election. The official opposition in !Kheis, the Congress of the People (COPE), is also sitting out this by-election.

If the ANC was to lose this seat, an independent, COPE and the DA would have the numbers to take power from the ANC in this municipality.

The ANC defended 18 out of 19 seats in the Eastern Cape in the last round of by-elections. Despite the numerous challenges pertaining to Covid-19 in the province, the party remained resolute and had a good night in the province. In Walter Sisulu (Aliwal North), it lost a ward to the DA and lost ground to a local party and the EFF in Dukathole township, a traditional ANC stronghold.

Raymond Mhlaba is in Fort Beaufort. The municipality includes the towns of Alice Bedford and Adelaide. Raymond Mhlaba forms part of the Amathole District.

The ANC might not have won in excess of 60% of the vote in 2016 but it still finished well ahead of all competitors. The DA is not contesting, but two independent candidates will hope to attract DA voters to their side. These include a teacher, Dorothy De Kok and a preacher, Maureen Bouwer. The ANC knows that if it gets the Nyarha voters out on election day it will retain the ward with comfort. The EFF got 12% of the proportional vote in 2016 and will want to build on that and finish second in the by-election.

Eastern Cape Premier Oscar Mabuyane hails from Engcobo, which is part of the Chris Hani District. This is a rural ward, which is north of All Saints Mission and the R61 regional road, and south of Elliot.

The United Democratic Movement (UDM) came second in 2016 but is not contesting this time. The EFF got 2% of the proportional representation (PR) vote in 2016 but did not contest on the ward ballot. It is the only challenger in this ANC-heartland territory.

The ANC largely held its own on Super Wednesday in the home province of the party’s secretary-general, Ace Magashule. It fended off the EFF in a competitive seat in Mohokare (Smithfield), had slight gains in Matjhabeng (Henneman) and had commanding victories in two Mangaung by-elections.

The ANC won 25/39 seats in Dihlabeng in 2016. Local government watchers were shocked to learn that on 30 November 2020 the DA won election to the coveted position of Speaker in Dihlabeng, beating the ANC. A sizeable proportion of ANC councillors either voted for the DA candidate or abstained as the DA only has 8/39 councillors. The ANC caucus is clearly deeply divided in Dihlabeng and the party will want to use this by-election to show that the caucus infighting will not prevent the majority of voters in the Clarens ward from putting their trust with the ANC. The party will want to remind its errant councillors that the public want the ANC to control the Speaker’s position.

Clarens is a popular tourist town south of Bethlehem, the principal town in Dihlabeng, which is part of the Thabo Mofutsanyane District. Ward 20 also includes the township of Kgubetswana, a farming district and the Golden Gate National Park. The DA is traditionally the second-most popular party in the ward but is sitting out this by-election. The EFF and an independent candidate, playwright Lanny Mokwena, are hoping to hurt the ANC. It will be interesting to monitor the turnout at the Moriting Wa Thutho School since this is where the DA picked up a big chunk of votes in the past few elections. Will its voters back the independent or stay away from the polling booth?

It is the third by-election in Mangaung since by-elections resumed and the third time it will be a two-horse race between the ANC and the EFF.

Ward 11 is in the south-eastern part of the city near the R702 road which links the city with Dewetsdorp. The ANC will want to clear 80% to send a strong message to the opposition parties that Mangaung is not in play in 2021. DM