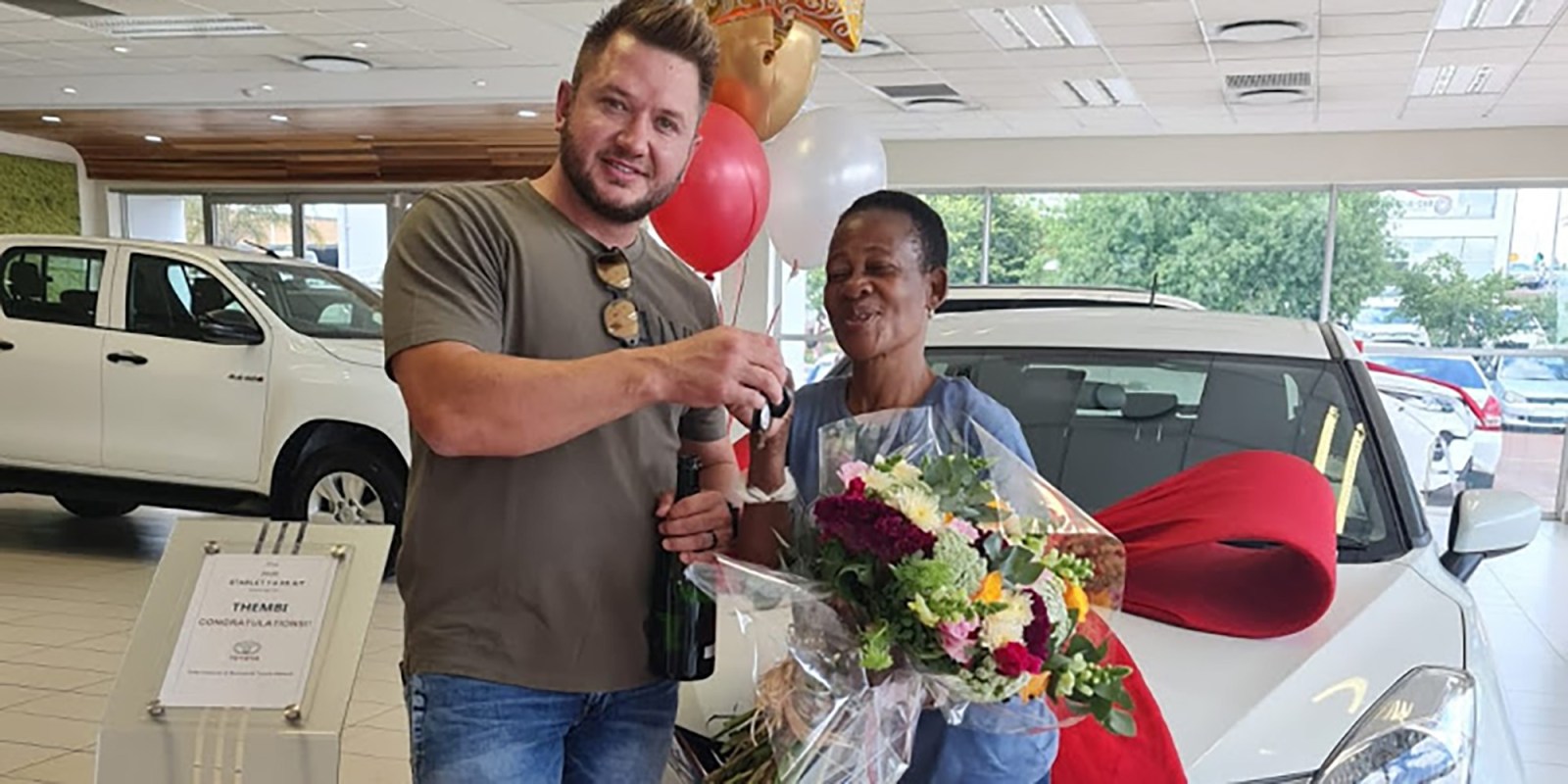 This is a summary of the trending, highest impact and most active themes and their narratives related to social cohesion and division in South African public-domain social media conversations for the week ending 3 December 2020. 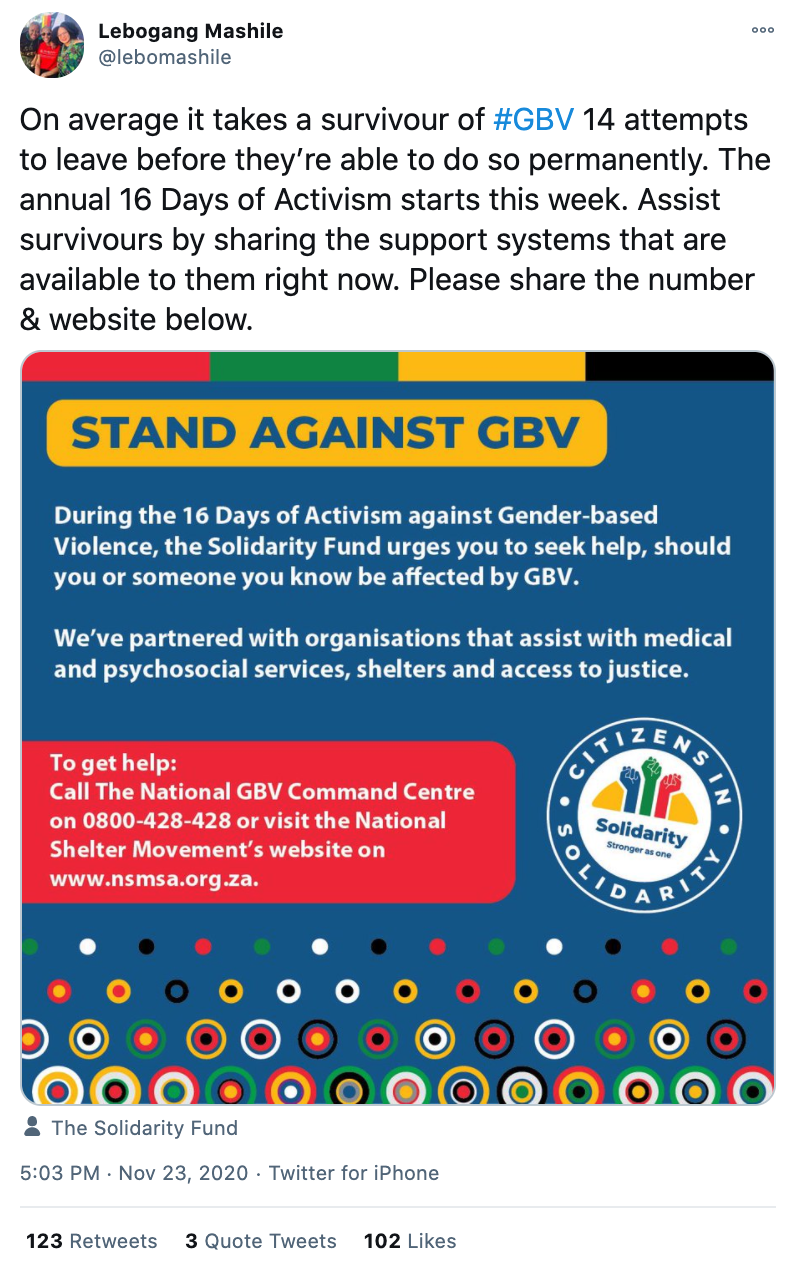 As South Africa joined the world in observing 16 days of activism to eliminate violence against women, politicians came under fire for saying the right words but doing little to end the violence.

DA leader John Steenhuisen shared: “Women deserve the freedom and right to feel as safe as we do in our homes and places of work, on our streets, and in our cities. Let’s #CommitToEndGBV 365 days and ensure legislative reform. If you know someone committing abuse – Don’t turn a blind eye!”

The EFF highlighted that in addition to facing sexism in most social environments, women were also underpaid.

President Cyril Ramaphosa shared: “#GenderBasedViolence has no place in this country. Not just during these #16Days, but for 365 days of the year.”

But some people criticised the government for speaking out without implementing effective initiatives to curb gender-based violence. Peter tweeted: “Why are there no constructive solutions coming from the higher ups? Every day, every week and every month we see more and more GBV cases but the laws don’t change, the punishment doesn’t change and nothing seems to improve… sad state of affairs!”

Unathi highlighted how the lack of basic services contributed to gender-based violence. She posted: “Yesterday,@CyrilRamaphosa praised Nomvula Mokonyane for doing great work in the @MYANC. This is the same former minister involved in the corruption & bankrupting of the Water & Sanitation department. Does Cyril know the kind of violence not having water perpetuates on women?… School girls walking in unsafe routes, risking getting raped as they go to fetch water, far from where they live.”

Poet Lebogang Mashile shared a post: “On average it takes a survivor of #GBV 14 attempts to leave before they’re able to do so permanently. The annual 16 Days of Activism starts this week. Assist survivors by sharing the support systems that are available to them right now. Please share the number & website below.”

Insurance company First For Women started a campaign against gender-based violence and a website for women that includes a pledge against GBV and a helpline for victims.

Donations to President Cyril Ramaphosa’s CR17 campaign were back in the news. @Goa_Phala tweeted that the Constitutional Court was hearing an application by Public Prosecutor Busiswe Mkhwebane who is appealing the North Gauteng High Court’s decision to set aside her CR17 campaign funding report.

The motion of no confidence by the African Transformation movement also made headlines. @JGvanZyl_ZA tweeted that President Ramaphosa was to face a motion of no confidence, but this was “Just another waste of taxpayers’ money!… All politicians should be employed permanently with fixed duty sheets and times to report at the office.”

Political journalist @AndiMakinana said this was a first for President Ramaphosa, as @bonglez tweeted that many of the President’s allies were at the centre of corruption allegations, such as Joburg Mayor Geoff Makhudo and Deputy Minister of State Security Zizi Kodwa.

@MlungisiDPG replied that this was not only an ANC problem: “All politicians are either corrupt or potentially corrupt.” 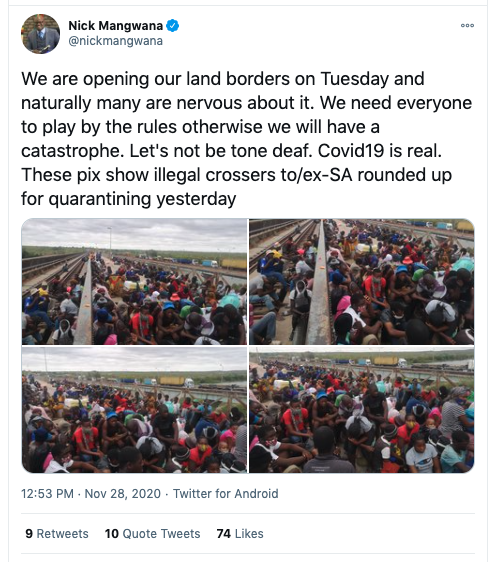 ANC supporter @Kgomo389 tweeted about a meeting in Durban where MK military veterans were plotting to“to kick illegal immigrants out of the country.” The post claims that the veterans were “ready to be arrested when they start their mission.” This post was liked more than 800 times.

In the comments, users cautioned against praising “rebel militant groups” or “worshipping soldiers”.

A #putsouthafricansfirst supporter wrote: “We need the names of those companies and audit of their current employees!”

Another user wrote: “Now MKMVA must start the process of cleaning this illegal foreigners back to their home countries.” This xenophobic tweet garnered significant traction with 1,700 likes and more than 350 retweets.

#putsouthafricansfirst supporter @King78190744 tweeted about a group of Zimbabweans who were apprehended for crossing into South Africa illegally, saying “the whole of Africa is coming to South Africa”.

This was another example of a pro-PSAF account twisting real conversations on social media to fit their xenophobic narrative.

It appears that @King78190744’s post, which gained 850 likes and 370 retweets, was based on a tweet by Zimbabwean Secretary of Information Nick Mangwana, who confirmed that the photograph showed “illegal crossers to/ex-SA rounded up for quarantining”. Mangwana explained that the group of people shown in the photo were not running away from Zimbabwe: “They are crossing to shop and come back.” 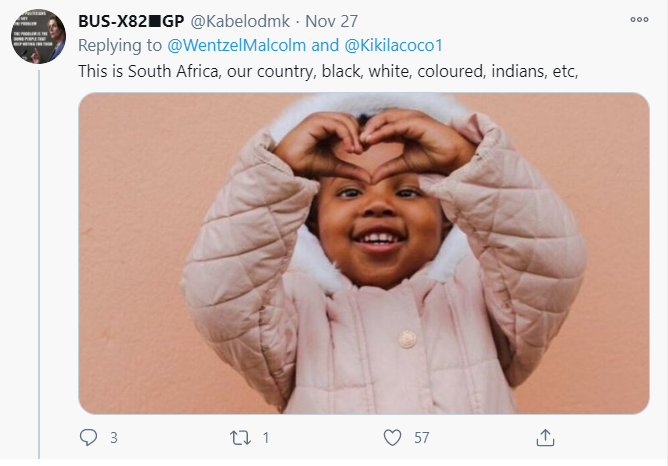 Tik Tok zalebs Malcolm Wentzel and his domestic worker Thembi got South Africa talking after he bought her a brand-new Toyota Corolla. Wentzel tweeted: “Congratulations to my #thembi @kikilacoco1 I bought her her 1st car at age most people retire!!!” The post was retweeted close to 5,000 times and received more than 50,000 likes.

His two next tweets received about 20,000 likes each. Wentzel appealed to South Africans: “This is what it must be like… please everyone lets be one nation… God bless South Africa #thembi @Kikilacoco1 treat everyone how you want to be treated.”

Wentzel became popular on social media in 2020 as he shared videos about his life at home, where he and Thembi play pranks on each other and drink together. Recently he sent her to driving school and allowed her to practise driving his car.

Most South Africans congratulated Thembi and praised Wentzel for his act of kindness. Some criticised him, saying he was making money from the popular Tik Tok videos, and implied that the gift was owed to her. This opinion was quickly thwarted by Twitter users with comments such as “This boer is doing right by Thembi and big ups to him” and “God please bless this guy. We need more people like him. We shouldn’t see race. We should just see each other as human.” DM

The Centre for Analytics and Behavioural Change (CABC) is a non-profit organisation based at UCTs Graduate School of Business and incubated by the Allan Gray Centre for Values-Based Leadership. It was established to track and counter mis- and disinformation, fake news and divisive and polarising rhetoric that is promulgated online to undermine social cohesion, democratic integrity and the stability of nation states.