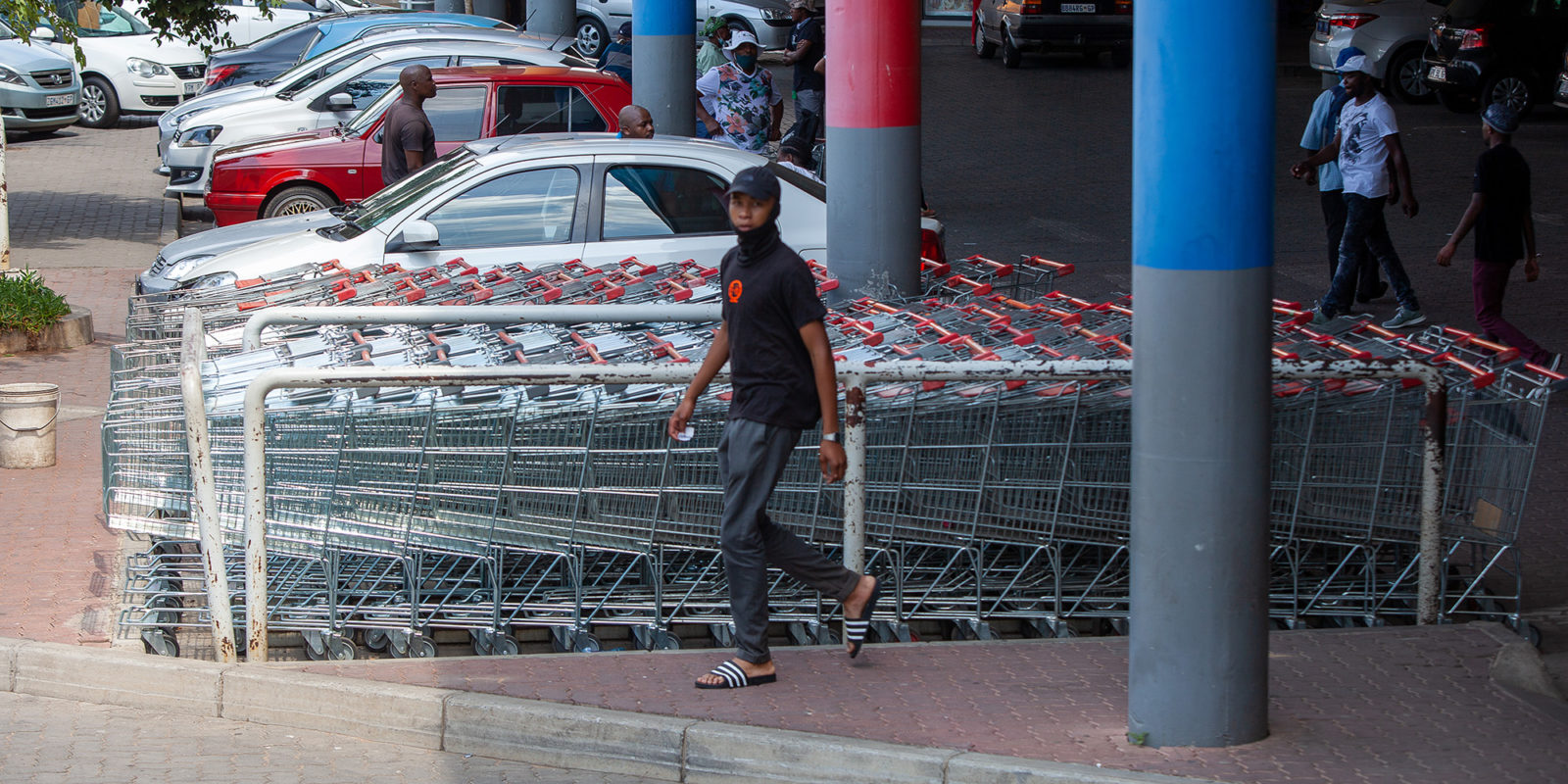 For the beleaguered retail industry, Black Friday and Cyber Monday were meant to be events that would kick-start festive season spending and help redeem a terrible sales year. But it appears that in South Africa these events were just another disappointment.

According to figures from payments clearing house BankservAfrica, total transaction volumes plunged by 33% and values by 52% year-on-year over the Black Friday weekend.

Most of the South Africans who splurged used their credit cards, adding to concerns about rising levels of consumer debt.

“The usual midnight to early morning queuing outside major shopping malls and retailers was far less than last year’s Black Friday. Our data suggest Covid-19 and the protocols of practising social distancing, combined with the economic impact of the lockdown and the increased interest in online shopping contributed to this,” says Martin Grunewald, chief business officer at BankservAfrica.

Some retailers chose to encourage social distancing and offered Black Friday specials throughout November, which may have had an impact on shopping behaviour.

That said, BankservAfrica’s Black Friday statistics provide a useful comparison of the total volumes and values spent on 27 November 2020.

While sales were lower, consumers took advantage of specials, with some 4.7 million transactions recorded worth R2.9-billion. In 2019, there were a record seven million transactions. This year’s value also showed a -52% decline, unlike last year’s R6-billion, which carried a 106% year-on-year growth.

While e-commerce statistics showed a marked increase – unsurprisingly, given the move to online shopping this year – e-commerce volumes were nowhere near the high volumes usually observed for in-store purchases, Grunewald says.

These numbers should come as no surprise given the dismal data released by the recently reconstituted Retailers’ Liaison Committee (RLC) on the impact of Covid-19 on the spending habits of South African consumers.

Its latest report shows that measured retail market sales were down 21% year-on-year for the period March to September, a fact also reflected in recent financial results from SA retailers.

Shane Butlion, chairman of the RLC, says that although there are some early signs of recovery in certain categories, the market has not yet returned to pre-lockdown turnover levels.

“Sales of clothing and homeware declined substantially in March 2020 as purchase shifted towards food items just before the lockdown. Retail sales in our measured market fell 96% year-on-year in April. With the easing of retail operating restrictions in May, the market saw a recovery, primarily driven by kids and baby [clothing], women’s intimate wear and menswear,” he says.

From May onwards, consumers devoted a larger share of their wallet to home-related purchases like appliances, furniture, accessories and decor.

Predictably too, spending shifted from formalwear towards casualwear and essential wear.

However, within the context of a contracting economy, and a further 2.2 million South Africans jobless by the second quarter of the year, it is not surprising to note that from June onwards the market contracted by 9%, every month, compared with the same period last year.

“The South African economy contracted by 17.1% year-on-year during the second quarter of the year,” says Christie Viljoen, an economist with PwC. “This included a 15.7% year-on-year decline in real household expenditure. A combination of employment losses, salary reductions and heightened uncertainty about the outlook for household finances forced consumers to tighten their belts.”

He added that Google data show that, in the last week of October, South Africans were spending 24% less time in shopping centres than in a baseline period of January 3 to February 6.

PwC expects the South African economy to shrink by 9.4% during 2020 and that only 800,000 of the 2.2 million jobs lost in the second quarter will be recovered by year-end. As such, household spending and retail sales will remain under significant pressure towards the end of 2020.

PwC’s baseline scenario indicates that it will take three years for South Africa’s GDP to return to 2019 levels. Under a downside scenario, this recovery could take up to six years. A similar timeframe is expected for a recovery in jobs.

The monthly RLC reports are made available 30 days after month-end, and so detailed insight into Black Friday sales is not yet available.

In the context of a bleak picture, there were some rays of light. Data released by South African payments provider Yoco show that small businesses experienced a remarkable 46% increase in card transaction volume on Black Friday compared to the average volume processed on a Friday after payday.

“Black Friday weekend is a prolific opportunity to grow, especially for those in the retail industry,” says Katlego Maphai, co-founder and CEO of Yoco. “In fact, in-store transactions for retail businesses saw an unexpected 35% y-o-y growth compared to 2019, against a total growth of 15% for all Yoco merchants who traded across both years.”

This comes in stark contrast to the data released by BankservAfrica.

This finding seems to suggest a shift in shopper behaviour as consumers elect to shop at small, independent businesses – both as a show of support as well as an attempt to avoid large crowds or minimise shopping time in malls.

Not all industries and locales experienced the same positive Black Friday as others. Where previously the day might have included store-hopping followed by sit-down lunches or takeaways, Black Friday 2020 appears to have been a more laser-focused event. Ancillary sectors like food and drink did not share in the success experienced by retail businesses, as they remained largely flat when compared to 2019 numbers, Maphai notes.

The takeaway from Black Friday 2020 is that small businesses not only have an opportunity to take advantage of promotional opportunities alongside big businesses, but that they are increasingly front of mind for South African shoppers who want to support local.

South Africa seems to have been an outlier in terms of its disappointing sales.

Globally, the trend was different, with digital sales on Black Friday hitting a record $62-billion, according to research from global software company Salesforce. Global Cyber Week sales – including Black Friday, Cyber Monday and Thanksgiving Day – increased by 36% over 2019 to $270-billion. 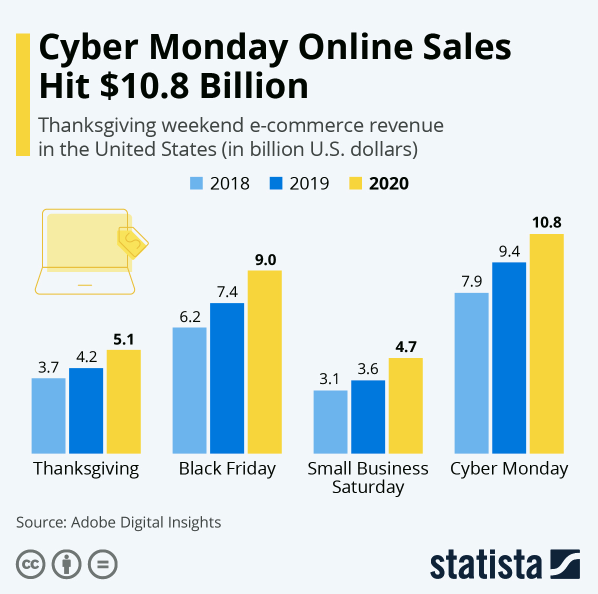 This data is based on Salesforce’s analysis of the shopping behaviour of more than one billion global shoppers on its Customer 360 platform.

However, the firm still expects overall holiday sales to be flat despite this digital growth, with anticipated overall sales of around $5.1-trillion, according to predictions released in October.

“The increase in digital sales is not expected to make up for the decline in brick and mortar sales,” says Robin Fisher, area vice president at Salesforce Emerging Markets.

Perhaps it is worth remembering that the term “Black Friday” was first used in 1869 by two investors who drove up the price of gold and caused a stock market crash. DM/BM

The Overton Window: Can the Basic Income Grant be won without a revival of the left?

Business of beauty: How the industry is adapting during the Covid-19 pandemic