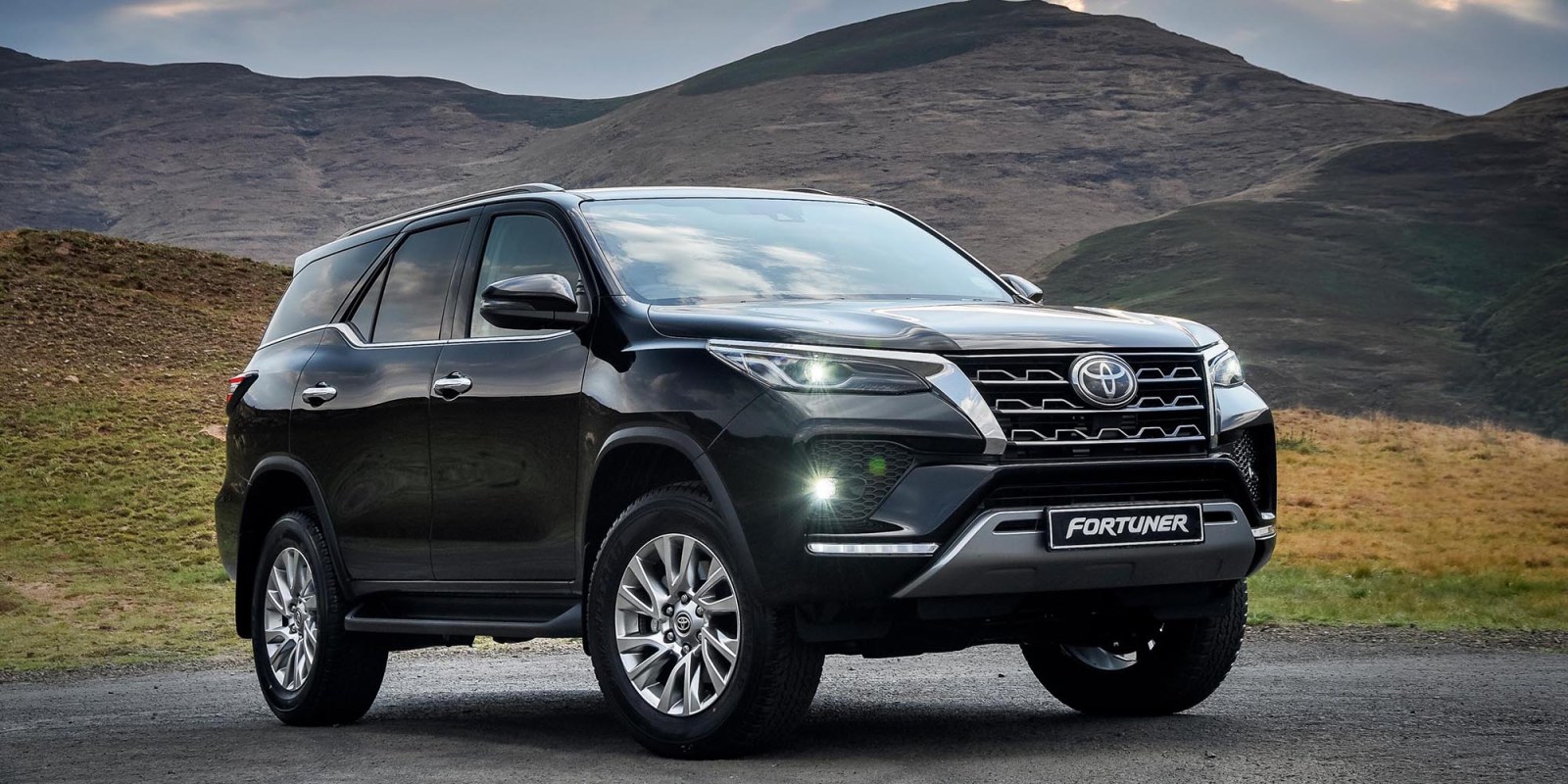 In November Toyota unveiled the refreshed SUV segment leader, the 2021 Fortuner. The big news has been the introduction of an all-new flagship model, the 2.8 GD-6 VX. (Photo supplied by Toyota)

Toyota South Africa Motors continues to dominate a local motoring scene shattered by Covid-19, with the recent launch of the refreshed Fortuner and Agya budget hatchback.

If there is anything I’ve learnt when it comes to brand loyalty during Covid-19 is that people have gravitated to what they know. Which means that Toyota South Africa Motors, known for its reliability, wide dealership network and accessibility of parts, has been one of the few local motoring manufacturing companies to have done pretty well, all things considered, during lockdown.

In what can only be described as a disastrous year for the motoring industry, by September there were signs of slim recovery, albeit the market was still down by 23.9%. For Toyota, September numbers showed a very different story. The motoring heavens opened for the locally based Japanese manufacturer when the Hilux bakkie sold 4,252 units, 842 up on the same month in 2019.

The Hilux made up for the majority of the 5,653 units Toyota sold in the Light Commercial Vehicle segment, almost equal to the 5,360 units sold in September 2019. Leon Theron, senior vice president of sales and marketing at Toyota, was clearly relieved. “September was a tremendous month for Toyota considering the current state of the market.”

While October continued to show a downward trajectory in the new vehicle market albeit at a slower pace, with aggregate domestic sales at 38,752 units, it was still down by 25.4% compared with the 51,968 vehicles sold in October 2019.

Figures just released by Naamsa for November have shown some improvement. New vehicle sales came in at 39,315 units, down by a less disastrous 12% compared with sales in November 2019 where 44,670 vehicles were sold. Toyota came out top of the charts, selling 9,441 units with the Fortuner nabbing 1,488 of those sales.

While Toyota has yet to host a real-life people launch while the Fords, VWs, Kias, BMWs, Mercs, Hondas and Hyundais have all reconnected masked face-to-masked face and sanitised metal-to-sanitised metal with local motoring media, Toyota has chosen to keep it all virtual, launching a host of new products including the trusty Corolla, the upstart Starlet and the refreshed Hilux via a screen.

Determined to grab even more market share, in November Toyota unveiled the refreshed SUV segment leader, the 2021 Fortuner online, shortly followed by the virtual launch of the minuscule el-cheapo budget hatchback, the Agya.

Let’s start with the beefy beast. Since its local launch in 2006, much like its Hilux bakkie bro, the Fortuner has been a runaway success for Toyota, dominating almost 50% of the medium-sized SUV market.

When it first launched 14 years ago, just as the local hunger for SUVs was gaining momentum, it captured the soul (and pockets) of South African adventure lovers with its rugged appeal and off-road capability. It also helped that it was built on the Hilux platform which added to its credibility as a tough and (sexist alert) manly machine.

Described by some as the “Belville Cayenne”, it’s been so successful that it’s seen only two generations since launch. In November, Toyota unveiled a refreshed Fortuner with some significant upgrades. But the big news has been the introduction of an all-new flagship model, the 2.8 GD-6 VX which I got to drive last week. Fortuner fans will be interested to know that the 2.7 VVTi 2.8 GD-6 manual and 4.0 V6 models have all been dropped from the present line up.

Toyota puts this down to “changing market requirements” and believes that the “VX” suffix of the new 2.8GD-6, which denotes the highest spec on offer (it’s found on the RAV4, the Prado and Land Cruiser 200) is just what the highly competitive and increasingly premier market needs right now.

There are some significant exterior upscales across the refreshed range including reprofiled Bi-LED headlamps with daytime running lights. The bumpers have been bumped up in size as has the blacked-out grille which gets some cool mesh patterning. The top of the range 2.8 GD-6 VX gets an added gloss finish and a silver-accented front skid-plate as well as 18-inch alloys and a towing capacity that’s been upped by 300kg to 3,300kg. There’s also a reverse camera, leather heated seats and matte wood trim.

I never quite understood who called for the brown leather on the dash and seats in the previous Fortuner, but thankfully the upscaled Fortuner is back to black with added silver seat stitching.

The cabin is attractively premium, complemented by an all-new 20.3cm colour touch infotainment system, which is Apple CarPlay, Android Auto and Bluetooth compatible. The Fortuner has leapt ahead to embrace the times with a whole bunch of streaming apps like Apple Music, JOOX, Spotify and SoundCloud on tap. All models are hooked up to the Toyota Connect telematics system with an in-car Wi-Fi hotspot.

There are two diesel engines on offer: the first is the six-speed manual or auto 2.4 GD-6 turbodiesel (110kW and 400Nm). The more powerful 2.8 GD-6 range with its all-new 150kW and 500Nm engine is only available in auto. According to Toyota SA, the company’s engineers have come up with a larger heavy-duty turbocharger with a ball-bearing cartridge to facilitate “exceptionally crisp and strong throttle response”. Four-wheel drive capability in the 2.4 and 2.8 models is also only mated to automatic transmissions. Toyota claims fuel consumption to be between 6.8 -7.9l/100km.

I got to take my 2.8 GD-6 Fortuner on a variety of road surfaces including highways, potholed streets, gravel and some pretty heavily rutted roads. It’s a very comfortable drive and when cruising, the Fortuner sails like a huge boat on calm seas. With its 150kW it’s not the most powerful SUV around, but when in Sport mode there is a definite surge of adrenaline. Of course, the market for the Fortuner is not boy racers but rather tough blokes bent on conquering the great outdoors, which makes the paddles on the steering wheel seem rather out of place. On more challenging surfaces, the Fortuner really comes to the fore. I was particularly impressed by the way its suspension responded to heavily rutted dirt roads which I understand has to do with its front double-wishbone suspension and four-link arrangement in the rear — all using coil springs.

Toyota has lagged a bit in the entry-level sub R200,000 segment, allowing the likes of the Polo Vivo and Renault Kwid to dominate. While I am yet to take it for a spin, on paper the Agya, whose name derives from an Indonesian Sanskrit word meaning “fast”, which is rather cheeky when you consider its 49kW of power and 89Nms of torque, is a cute looking tiny tot.

Now these figures may not get you pole position at Le Mans, but for its entry-level target market, who are mainly first-time car owners or customers who want a cheap runaround, it’s adequate. It has the basic air-con, electric windows, two airbags, ABS and EBD, pretty much in line with its rivals.

There’s only one engine on offer: a 1.0-litre 3-cylinder mated to a manual or four-speed auto gearbox. What the Agya lacks in power it makes up for in colours. There’s a whole funky range to choose from including Sunrise Orange, Electric Yellow and Flame Red, as well as more standard shades like white, grey and silver. One can also opt to have the Agya kitted out with decent sound at an added cost.

It will be interesting to see how it fares against the Polo Vivo, Renault Kwid, Hyundai Atos, Kia Picanto and Suzuki Swift. With its not-so-secret weapon – its Toyota badge – and with South Africans sticking to brands they trust, especially in times of crisis, the Agya is sure to rack up sales in this budget hatch segment. The Fortuner will most certainly continue to dominate the mid-sized SUVs. DM