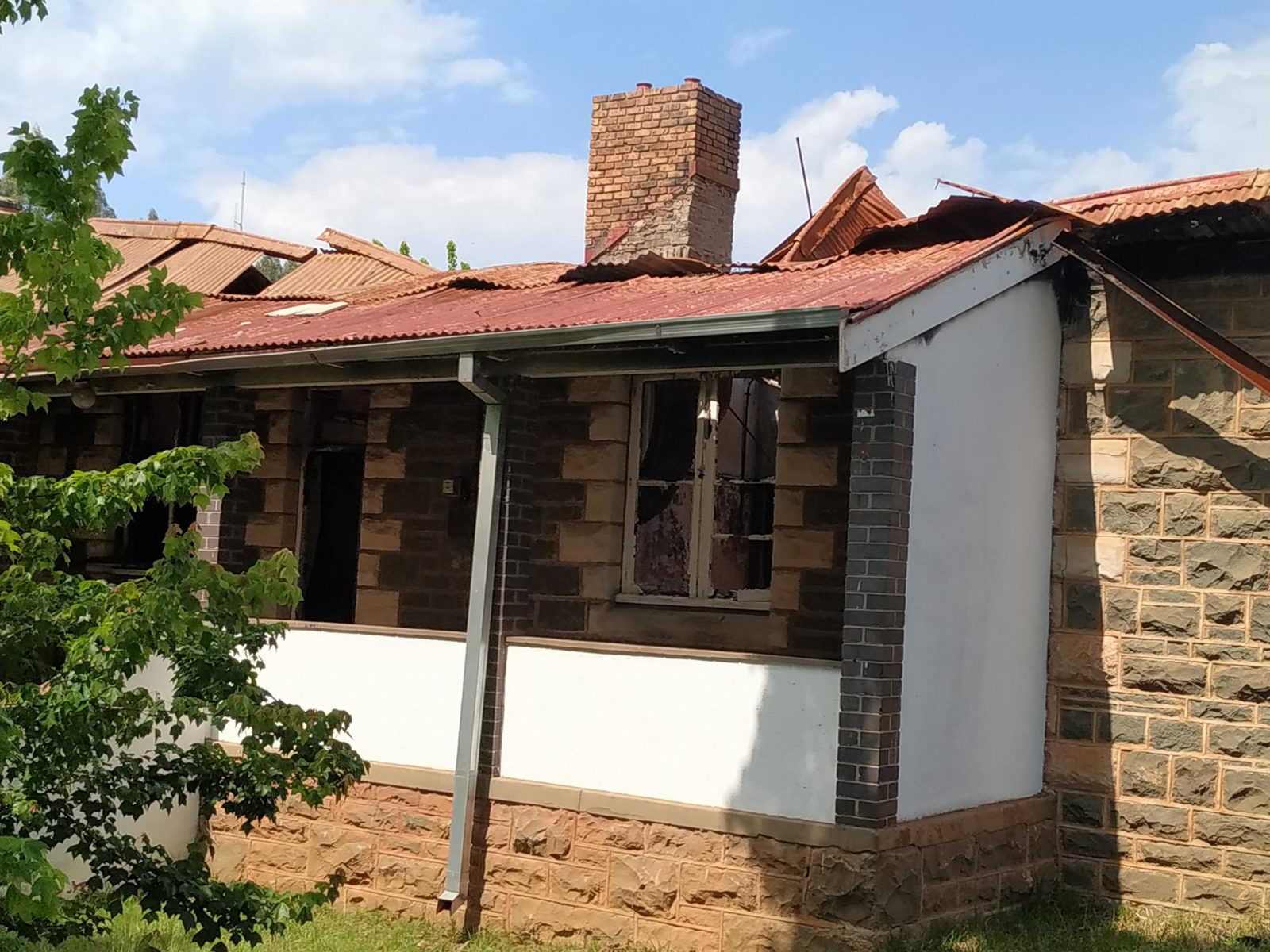 The gutted heritage house that was the SAPS detective office in the town of Dullstroom in Mpumalanga. (Photo: Shaun Smillie)

Over the past decade, the SAPS has been working to introduce an online system for storing criminal dockets. The electronic system would prevent dockets from being stolen, manipulated and sold. However, despite the benefits, it’s still unlikely to be rolled out soon.

Just before dawn on 11 May 2017, Thomas Bhekumuzi broke into the SAPS detectives’ office in Dullstroom, Mpumalanga, in a last-ditch attempt to beat some jail time.

Later that day, Bhekumuzi was due to appear in the Belfast Regional Court to be sentenced for robbery.

Detectives believe that he broke into the heritage house that sits behind the Dullstroom Police Station so that he could destroy his police docket.

Once inside the office, he stole two laptops before setting the house on fire.

By the time the fire truck arrived from the neighbouring town of Belfast the office had been gutted.

Bhekumuzi’s docket wasn’t destroyed that day – it happened to be safe with the SAPS in Middleburg.

What was lost, however, were the murder and attempted murder dockets of Susan Howarth and Robert Lynn. They were victims of an attack at their farm, Marchlands, three months earlier.

It was an attack that received international interest because of its brutality and because they were British citizens. The couple was tortured with a blowtorch, then bundled into the back of a bakkie and left for dead. Howarth died two days later, while Lynn was left with a bullet lodged in his neck.

Three men, brothers Nkosinathi and William Yika, and Lucas Makua were soon arrested for the crime. But with the burning of the detectives’ office, detectives had to replace what had been lost in the police docket.

“So, it was destroyed and they had to put all the evidence back together again,” says Claire Taylor, who was Howarth’s friend. “And obviously that put a delay on things, the investigation and the trial.”

Among prosecutors and detectives, police dockets are known as “brown donkeys” and for many years these folders have been the sole carriers of all the evidence and investigation related to a particular crime.

They are not duplicated, so destroy the docket and detectives have to start from scratch or close the case.

It is because of this that brown donkeys disappear as they move through the justice system. Besides crooked cops and prosecutors stealing dockets or selling the evidence inside them, there have been reports of rats destroying them.

To rectify this, the SAPS over the last decade has been working to introduce a system where a docket would be stored online. It is known as an e-docket and forms part of the Integrated Case Docket Management System (ICDMS).

The frustration, according to criminologists and other crime experts, is that the police are battling to get the system up and running.

“This is disgraceful as far as I am concerned,” says one former senior police officer, who didn’t want to be named. “The idea was that when a prosecutor requires a docket she presses a button on her laptop and she calls it up from the station. So, there are no more policemen running around in cars delivering dockets.”

The system would, he believes, also prevent the theft of dockets.

It is a glorified scanning system, that is all it is.

However, according to Gareth Newham, the head of Justice and Violence Prevention at the Institute for Security Studies, there are a number of challenges facing the rollout of the e-docket system. One big problem is that many police stations are not connected to the internet.

“It’s a good idea, but you need scanners, you need filing systems, massive data storage and you need to train the detectives,” Newham says.

“Then, if there is a problem with a scanner breaking down in a police station, it takes three months to replace.”

In the proposed new system, a case docket is registered on the Crime Administration System, the docket is then scanned and stored at head office. The files can’t be deleted and they can be audited and tracked within the system.

“It is a glorified scanning system, that is all it is,” says Kameshwhri Moonsamy, who wrote a research dissertation for her Masters of Law degree on the administration and governance of the South African docket system.

“If adequate measures are put in place to ensure that the e-docket system is not subjected to undue influence such as nepotism, political factionalism and systemic corruption,” says Moonsamy, “this will not only assist in the mobilisation of cases and the investigation process, but also help rid some of the reminiscent apartheid inadequacies of the docket management.”

The police had not responded to questions about the status of the e-docket system by the time of publication.

“Despite the capital injections and years of planning dating back to 2009, the e-docket is still in its tender stages and its efficiency, utility and lifespan in the criminal justice system is yet to be determined,” says Moonsamy.

The e-docket system is being trialled at some police stations.

In March the Western Cape provincial minister of community safety issued a statement regarding the findings of the Department of Community Safety’s Docket Archive Store (DAS) Assessment Project.

It found that the ICDMS had not been effectively used.

The assessment took place between July and September 2019 and monitored the standard operating procedure of 11 police stations in the Western Cape.

It found that 72.7% of detectives were not fully trained to use the ICDMS, and that 62.9% of dockets were lost in the DAS system with no disciplinary action taken.

None of the stations had linked the system to other departments.

So, for the meantime the brown donkeys will continue their work as they shuffle through South Africa’s justice system.

Just outside Dullstroom on the R533, Taylor often lays a wreath and ties ribbons to the Marchlands sign that marks the turn-off to her late friend Howarth’s farm.

“I tie those ribbons, and a lot of people come into the shop and ask me about those ribbons and I tell them. Because I want everyone to remember Sue.”

Taylor continues to travel to court as the trial of the three men accused of killing Howarth lumbers on. In three years the trial has been moved to three different magistrates’ courts across Mpumalanga. The next court appearance is scheduled for March 2021.

“And I am not going anywhere until justice is done,” she says. DM