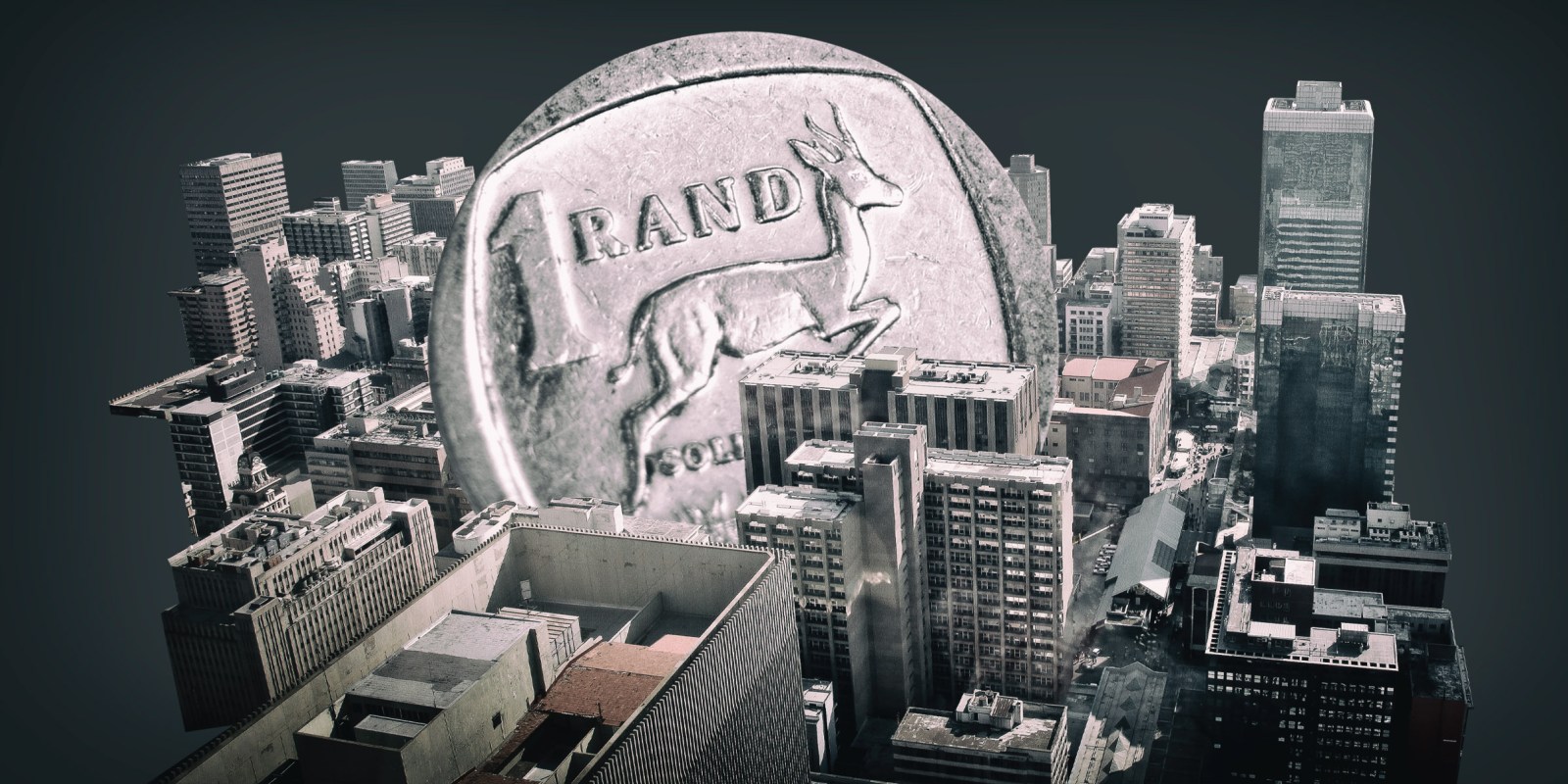 Developed market stimulus packages have lifted emerging market trade fortunes – and, so far, have kept financing pressures largely at bay. The outlook is expected to be favourable for this group of countries too, although South Africa is pinpointed as one of the few that has only a thin buffer to protect itself against any setbacks.

Emerging markets (EMs) have been the inadvertent beneficiaries of the massive stimulus programmes in developed countries. Trade balances have improved materially as exports benefited from stimulus-propelled demand, and imports have been stifled by slow growth in their home economies.

South Africa is a good case in point. Latest statistics show that the current trade balance widened to R36.2-billion in October from a revised R33.4-billion in September. Exports rose 10% month on month, while imports rose by 10.8% as we head into the festive season, but they were still 13.6% lower than the same period the previous year.

EMs in general are running “unusually favourable” trade balances, according to the Institute of International Finance (IIF), with imports losing ground because of the Covid-related recessions, and exports benefiting from robust demand from the developed markets.

IIF deputy chief economist Sergi Lanau and economist Jonathan Fortun point out: “In relative terms, policy stimulus in the developed markets was larger than in emerging markets, which translated into stronger import demand in the former (and China). In other words, a deeper and longer recession in EMs led to improving trade balances.”

To date, the improvement in trade balances stands out compared with other crises. Lanau and Fortun say: “In many EMs, the trade balance year to date in percent of GDP is as good or better than at the peak of the global financial crisis,” as shown in the graph below. South Africa’s trade balance was negative in 2009 during the financial crisis but has moved firmly into positive territory as a percentage of GDP up to October. 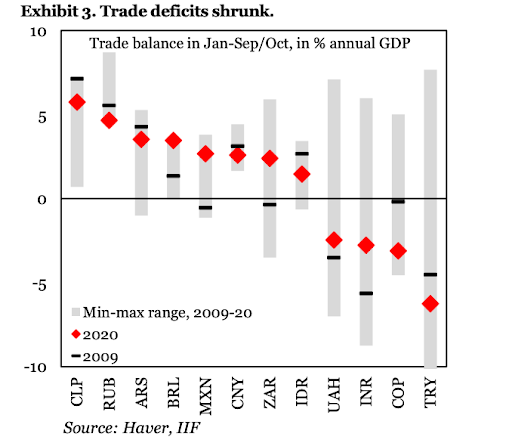 There’s also good news on the foreign portfolio flows into emerging markets front. The IIF calculates that some $77-billion flowed into emerging market securities during November on favourable vaccine developments and the removal of some uncertainty with the news that Joe Biden was president-elect.

Lanau and Fortun say the turnaround in flows means the fourth quarter of this year may just turn out to be the strongest quarter for emerging market inflows since the first quarter of 2013, before the taper tantrum cut short a risk-on wave of investor sentiment. November inflows have been most pronounced in equities, with bonds lagging. IIA figures show that debt inflows amounted to $36.7-billion versus the unusually strong $39.8-billion that went into equities.

The extent of the shift in investor sentiment from October to November was significant, with emerging market securities attracting around $76.5-billion in November, more than three times the $23.5-billion inflows in October (see the graph below). It’s also a vast contrast to earlier this year, when emerging markets experienced large capital outflows as a result of the onset of the Covid-19 crisis. 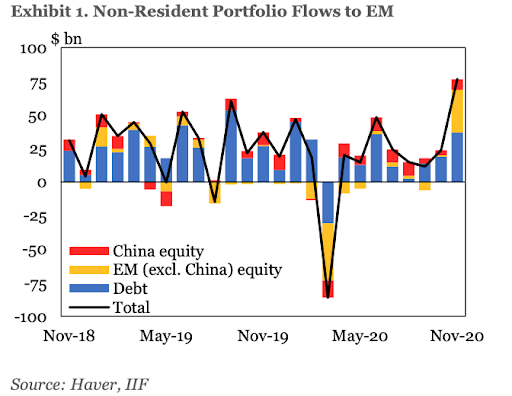 Also positive for emerging markets is that reserve losses have been smaller than in past EM shocks, say Lanau and Fortun, which means they have stable buffers relative to their financing needs.

“In the bigger picture, EM gross financing needs do not look especially onerous. Unsustainable current account deficits and external risk are not a critical concern. Growth is the main casualty of the Covid-19 crisis.”

However, it is a concern that South Africa, along with Turkey and Ukraine, are identified as having the thinnest buffers.

It’s premature to become too optimistic about the outlook for emerging markets, particularly those, including South Africa, that are more vulnerable to shifts in global investor sentiment.

Investec economist Lara Hodes says: “Going forward, heightened uncertainty continues to underpin the global economic outlook.” She thinks SA’s export performance is likely to have worsened in November because Europe is grappling to contain the virus and is a key export destination for SA. There were already indications of a material slowing in demand in the Eurozone manufacturing PMI for November.

For South Africa, fortunately the pickup in exports has been broad-based, with SARS data suggesting that all major categories rose month on month in November. Hodes says the only category to decline was vegetable products, which fell by a steep 35% month on month. Vehicles and transport equipment did particularly well, which, Hodes says, “is reflective of the gradual recovery of both the local and international automotive sector, which were particularly hard hit by the lockdown restrictions”.

Institutional investor stances towards EMs are largely positive, with the belief that relatively favourable economic prospects, a weaker dollar and the ongoing appetite for higher yielding and better-valued investment opportunities are likely to work in their favour.

As seen in the graph below, the IIA is particularly bullish on South Africa’s 2021 current account outlook, forecasting a current account surplus of more than 4% of GDP, double the 2% envisaged this year. 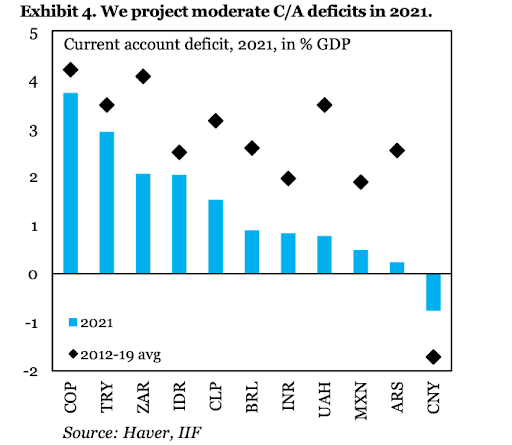 However, the known risks remain high, namely Covid-19, fiscal constraints and the looming fears of a government debt default should the global and local environment deteriorate much further. In such a scenario, the thin buffer protecting South Africa from its funding needs becoming overwhelming would soon be eroded. DM/BM