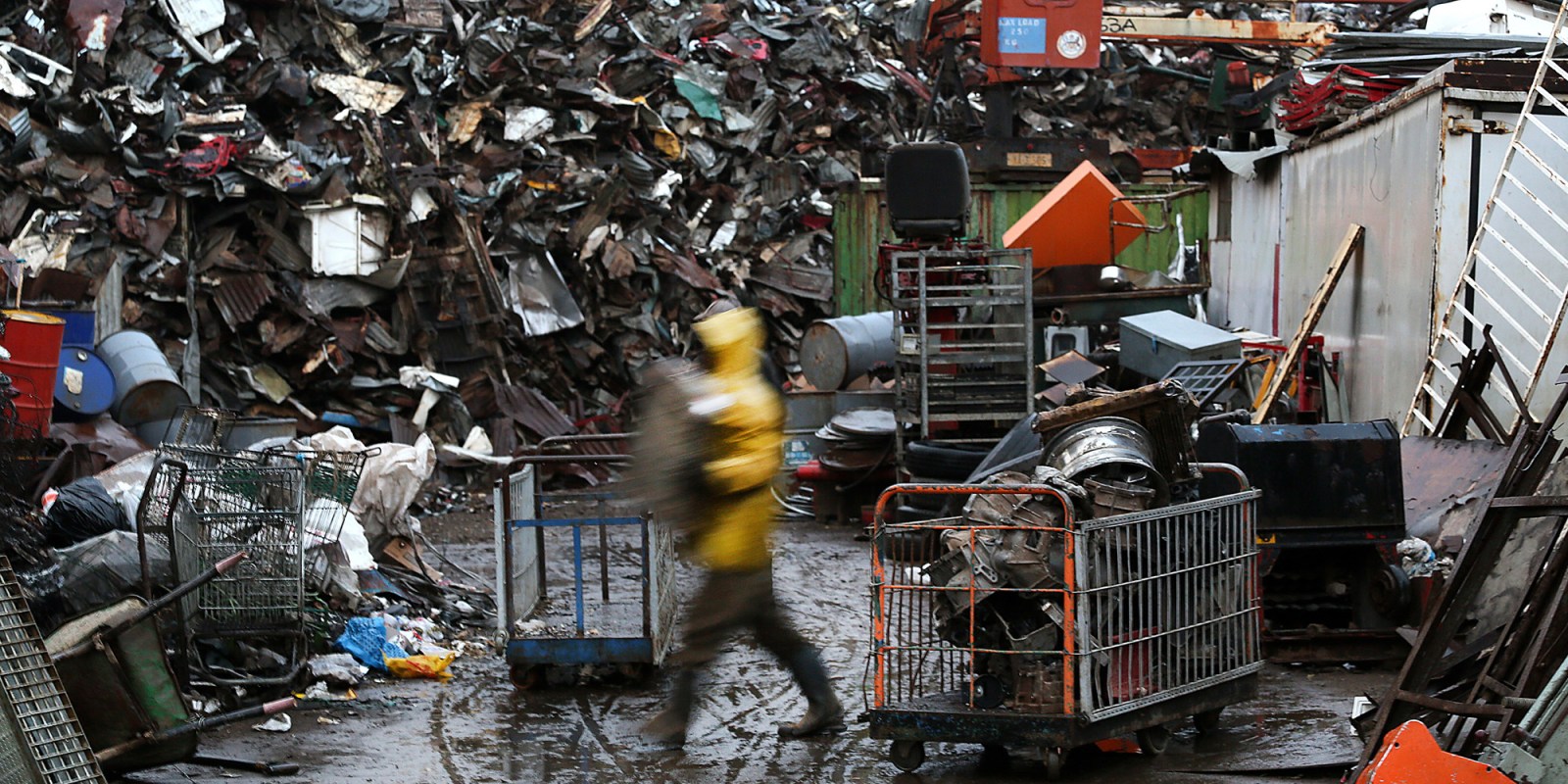 Scrap metal is a critical feedstock into manufacturing. The metals value chain is central to South Africa’s industrialisation and has significant linkages to infrastructure, construction, mining and a range of manufacturing industries. (Photo: Gallo Images / The Times / Alon Skuy)

There are conflicting views on what the enforced price discount on scrap metal has had on the industries in the metals value chain, though it is clear that more support is needed for the scrap metal processing industry.

Scrap metal is a critical feedstock into manufacturing. The metals value chain is central to South Africa’s industrialisation and has significant linkages to infrastructure, construction, mining and a range of manufacturing industries.

The three largest consumers of metal products in South Africa are the construction industry, the mining industry and the transport equipment manufacturing industry, which together account for approximately R750-billion or 15% of SA’s GDP, and employ nearly 2 million people (both formal and informal).

Public officials have implemented various measures to support the availability of affordable scrap metal to support the economy and add value to our raw material input base.

In 2013, the then minister of economic development issued a Trade Policy Directive for the International Trade Administration Commission (ITAC) of South Africa to regulate the exportation of scrap metal through the introduction of the Price Preference System (PPS).

The objective was to improve the availability of better-quality scrap metal at affordable prices for foundries and mills in the domestic market to assist them in becoming more cost-competitive against imports, enhancing investment, jobs and industrialisation.

But the PPS seems not to have provided sufficient support, according to National Treasury’s submission to Parliament, such that the sector can flourish in competition with global counterparts, many of which benefit from an export tax on scrap and lower domestic prices for scrap.

The ITAC conducted an investigation and, based on its findings, recommended that the current PPS be replaced with export duties since it has not effectively provided support to the foundries and mills with availability of affordable, quality scrap.

Of all the export measures out there, an export tax is considered the lesser of all the evils, as it is the easiest to administer, says Duane Newman, managing director at Cova Consulting.

The Department of Trade, Industry and Competition (DTIC) tends to agree, and believes it should be more effective in reducing the domestic price as it will have the effect of reducing the export price achieved by local scrap dealers, unlike the PPS.

Treasury said: “Scrap metal is a key input for downstream manufacturing supporting local beneficiation. The system, however, has been circumvented by both illegal means and using loopholes in the PPS, resulting in illegal and excessive exports of scrap with the consequence of a shortage of affordable scrap for local consumers. The export duty was recommended as an alternative for regulating the export of scrap from South Africa.”

Based on this, it was proposed in the 2019 Budget speech that changes be made to the Customs and Excise Act to provide for an export duty on scrap metals.

But despite National Treasury, the ITAC and the DTIC panel-beating the new export tax to go live next April, Minister Ebrahim Patel decided to uphold the industry discount in place by way of a recent Government Gazette announcement. This is after he imposed an outright ban on all scrap metal exports on 3 July 2020.

For example, let’s start with Mpho, a Johannesburg scrap metal collector. He loads used cans into a trolley every day, and when his cart is full, he heads off to his nearest metal recycler, Fred. Fred takes receipt of the can collection and depending on the grade of metal, will pay Mpho, by weight, for the scrap.

“Usually the buyer would sell this raw material to a foundry, mini mill or export it,” says Donald MacKay, director at XA International Trade Advisors. “Importantly, the price he/she will pay for the scrap he is buying from the collector is determined by how much he can sell it for. The foundries and mini mills would, of course, like the price of their raw material to be as low as possible and the recycler would like his price to be as high as possible. There are a lot of scrap collectors and recyclers and there are a relatively small number of foundries and mini mills, so the market power sits with the downstream users.”

The downstream users do not want to compete with export markets for the scrap metal and in fact feel so strongly about this that they convinced the DTIC to ban the export of scrap metal completely for two months, which got extended to three months to the end of October.

Used beverage cans are a fairly low grade of aluminium, and before Patel’s ban, a scrap collector would earn about R9/kg, which is around 70 cans. But when the ban came into play the price fell to R3/kg, says MacKay.

Going back about seven years, the downstream consumers of scrap also approached the ministry to complain about their competition with exports. Cue the PPS system.

“The PPS forces the scrap recyclers to first offer their scrap to the local users at a discount. They can only get an export permit if they have no local offers and the discount levels of PPS are steep (30% for scrap ferrous metal, for example),” adds MacKay.

What happened after implementation was that the value of scrap metal exports fell from R10-billion per annum to R3-billion and the number of mini mills and foundries roughly doubled since then.

This is seen as an economic success story by the government and the downstream industry, except it loses sight of the fact that most of these mini-mills are not a natural development of increased demand in the market for foundry products. They exist because they have a subsidised raw material, says MacKay.

“Yes, the taxpayer is not providing the subsidy, but the subsidy is provided by fiat. It is a forced transfer of value from the recycling sector to the mini mills. Most of these mini mills also receive (presumably) discounted financing from the IDC [Industrial Development Corporation], so understandably there is a lot of interest in owning a mini mill.

“But this is not enough, of course. The proliferation of mini mills means greater demand for discounted raw materials, which means even more of the export-destined scrap metal needs to be forced into the local market, bringing us to where we are now; a PPS which makes it ever more difficult to export,” says MacKay.

They also need to make a profit, which means the price paid for the scrap from their smaller competitors will be lower. This will ultimately make it less attractive to export, forcing more product into the local market.

Scrap metal is a voluminous product, so when you are stuffing a container, you are getting somewhere between 20 tons and 25 tons into the container. If you are a small recycler it can take a while to get enough to fill a container (think of how many Mphos you need to get to 20 tons). Mpho, our street recycler, goes about his collecting and when he has enough he makes an offer into the local market. The buyer, Fred, puts his offer of 20 tons of aluminium into the market, through the ITAC, which then distributes his offer to the scrap consumers. If there is interest, a buyer will make an offer and a deal will either be struck or not. If Fred does not conclude a local deal, the ITAC will issue him with a permit and he will export it.

But he will need (lots of) capital and land, both of which are expensive, says MacKay. “They also need to make a profit, which means the price paid for the scrap from their smaller competitors will be lower. This will ultimately make it less attractive to export, forcing more product into the local market.”

For those products that can’t be sold locally, which by variety is significant, scrap recyclers will be forced to sell to the aggregators. We are not going to see hundreds of aggregators, which means we will almost certainly end up with a small number of buyers purchasing from a large number of sellers.

So the initial buyer will get a much lower price for his scrap metal, he will pay Mpho less for his collection, which will force Mpho to decide if it is worth his while collecting certain types of scrap. If he stops collecting, then the scrap becomes just rubbish and will end up in a landfill.

According to the DTIC, there are 300,000 waste collectors, so the impact of further reduced scrap prices on the most vulnerable people in South Africa is quite profound. The DTIC did not respond to queries.

There are many scrap collectors and recyclers, and there are relatively few foundries and mini mills, so the market power sits with the downstream users. DM168/BM